When Oliver Risch moved from Portland, Oregon, to attend ASU’s Barrett, The Honors College, it took him some time to decide what he wanted to study. Although he had always enjoyed math, he discovered in college that he was interested in economics and public policy. After first majoring in political science, then economics with The College of Liberal Arts and Sciences, then economics in the W. P. Carey School of Business, Risch decided that majoring in mathematics and minoring in economics would allow him to pursue his wide range of interests while developing the skills he would need to start a career in economics. 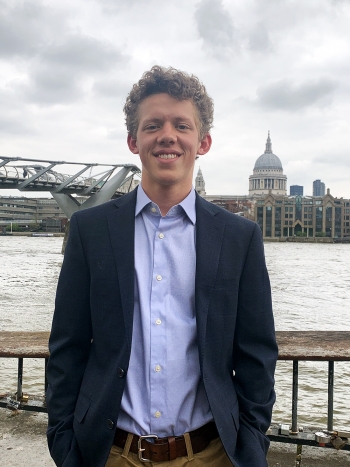 He met with Dieter Armbruster, professor of mathematics and associate director for graduate programs in the School of Mathematical and Statistical Sciences, who had worked with other Barrett honors students on analyzing NBA games as networks and using network theory and statistics to characterize the style of play of different NBA teams. For his honors project, Risch suggested that they could use machine learning ideas to predict the odds for winning in NBA games. The two discussed the idea but determined it was a much too ambitious goal and settled on a simpler task of predicting free throw efficiency.

“We discussed the possible influences for such predictions and did some simple statistical approaches that suggested that fatigue might play a role,” said Armbruster.

Armbruster suggested they add Associate Professor of Statistics P. Richard Hahn, as co-chair of the honors project, who could work with Risch on the computational and analytical details of some machine learning approaches to solve this problem.

Hahn is interested in applications of machine learning to data generated by humans, which might be accounting data, or game play data, or social media data, and sports definitely fall into this category. He is also a big NBA fan, which made him a good fit for the project. Risch put together an interesting data set and the three of them talked about it and had fun trying out some different approaches.

“Sometimes there are patterns in data you do not expect,” said Hahn. “Modern data analysis algorithms are very flexible and can ‘discover’ patterns that a human might not know to look for. So we were interested in looking at the free throw data with that kind of open mind.”

They utilized two different supervised machine learning algorithms to estimate the effect of fatigue on free throw efficiency. They hypothesized two effects: a positive, short-term effect of playing in the game – the benefit of warming up; and a negative, long-term effect – the cost of fatigue. Their results showed that across the NBA, the former is present, and the latter is not.

Since they were predicting a binary outcome of making or missing free throw attempts, they used two classification models to analyze the data: logistic regression and XBART (accelerated Bayesian additive regression trees).

XBART was developed by Hahn a couple of years ago and is more complicated. It is a tree ensemble. Classification trees work by splitting the data into partitions based upon similar characteristics and making predictions of new data based upon the outcomes of data in the same partition. A tree ensemble aggregates the estimates of a number of classification trees for more accurate predictions.

They used play-by-play data obtained from Kaggle.com, an online data-science website, and cross-referenced it with aggregated data from basketball-reference.com. This allowed them to obtain precise measures of how many minutes players had played in the game at the time of their free throw attempt for every game in the 2017, 2018 and 2019 NBA seasons — roughly 1.5 million rows of data, in total.

“At least since Michael Lewis's book ‘Moneyball’ came out nearly 20 years ago, analytics has been a big deal in professional sports,” said Hahn. “These days professional sports organizations have dedicated data science teams that inform recruiting, training, marketing — all aspects of the operation.”

Risch chose to come to ASU for two reasons: He was offered a full-tuition scholarship as a National Merit Scholar, and he thought Barrett was a really special program that offered many unique opportunities.

Since he started ASU as a political science major (and mathematics minor), he worked for a brief time writing about important issues for the State Press. He later did a financial internship with the 2018 David Garcia for Governor of Arizona campaign. During the summer of 2019, he assisted in evaluating acquisitions at search fund Hillandale Capital.

Risch also worked as a tutor, then later as executive director for RISE (Refugee Integration, Stability, and Education). RISE is both a student organization and an affiliate program of the nonprofit American Muslim Women’s Association of Arizona (AMWA), and works throughout the greater Phoenix area to help refugee youth achieve academic and personal success through tutoring and mentorship. Refugee children who move to the U.S. often fall behind in school due to linguistic and socioeconomic barriers, and RISE seeks to change that.

“I learned a lot from our amazing students, and working with them every week broadened my perspective, and was most certainly the highlight of my time at ASU,” said Risch.

Although the COVID-19 pandemic was spreading throughout the world, Risch decided to study abroad during his final year of college at the London School of Economics (LSE). When he arrived in September, cases in the U.K. were quite low but beginning to rise. Even though everyone tried to meet new people in a safe manner, it was challenging given the nature of student accommodations. During the fall semester there was an outbreak, and at one point nearly 75% of the students in his dorm were self-isolating from a positive test or exposure to someone with a positive test. Risch ended up contracting it but fortunately he had relatively mild symptoms.

LSE was operating with a hybrid model in the fall, with lectures online and seminars in person with face coverings and social distancing. Then around the winter holidays, cases rose quickly, forcing the school to convert all classes and lecture to fully online for spring. He was fortunate to still be able to meet new people and make friends through the LSE General Course programme and through his dorm. Risch will be in London studying for a few more weeks and taking his final exams.

“LSE is a great school academically for the subjects I am studying — economics and mathematics — and my scholarship covered my tuition abroad for the year,” he said. “While it has been an unusual year with everything going on, I have still been able to have an amazing time at LSE, meeting some incredible people, and exploring London and the U.K.”

This month Risch graduates with a Bachelor of Science degree in mathematics and a minor in economics from The College of Liberal Arts and Sciences.

“Economics and mathematics are a natural combination if you are interested in the world of business and human behavior, as economics is the most quantitative branch of the social sciences,” said Hahn. “I'm not an impartial judge, because my own undergraduate degree is in economics. Personally, I was drawn to economics' focus on practical decision-making. For me, data science is all about using mathematical tools to understand data in the service of guiding practical decisions — that kind of mentality is more common in economics than in pure mathematics, say.”

This summer Risch will begin a two-year research assistant position at the Federal Reserve Board of Governors in Washington, D.C. He will be working in the Financial Stability Assessment section, which focuses on studying threats to the stability of the financial system and contributes to some of the policy work that informs monetary policy decisions of the board and the Federal Open Market Committee.

“Oliver showed great initiative and was very well advised by going for a year to the London School of Economics, which is arguably one of the top schools in economics worldwide,” said Armbruster. “In addition to his academic achievements, he will have very practical experience through his research assistantship at the Federal Reserve.”

Risch is unsure of his plans after that, but is considering graduate school in economics or finance.

“I expect him to get fabulous offers once he applies for PhD programs,” said Armbruster.

We caught up with Risch from "across the pond," to ask him more about his journey as a Sun Devil.

Answer: I like how applicable the field is. It seems like mathematics can be applied to and provides insight into a huge variety of other academic fields, and understanding mathematics helps you to understand a broad array of seemingly unrelated topics.

A: I have had some amazing professors at ASU. One whom I learned a ton from was Dr. Alexander Hill in the economics department. It is hard to pinpoint a single lesson — every lecture and office hours chat I was constantly learning. Perhaps the biggest lesson I learned was the value of asking questions — while it can be intimidating at first, I quickly found that it was incredibly worthwhile to ask about anything I was unsure of from class or wanted to learn more about.

A: It may be cliché and preachy, but go to office hours. Professors can seem a little distant or hard to relate to sometimes, but they are professors because they enjoy teaching, and 90% of the time they hold office hours, nobody goes. It is super helpful not only to ask questions about content from class, but get to know them and hear about their experiences. You never know who will be in need of a research assistant or make an important introduction, too!

A: Tough to choose one, but probably the secret garden. Lots of shade for a hot Arizona day.

A:  I enjoy playing pickup basketball, hanging out with friends, and exploring the outdoors!

A: Again, very cliché, but I really think that the reason most people dislike math is because they didn’t have great teachers growing up. Everybody learns differently, and I think the reason many people struggle with higher-level math is because their optimal learning method is different from the cookie-cutter model of instruction in most schools.

A: There are a ton of issues worth tackling, but probably the most important one right now is climate change. We need to fundamentally shift how we interact with the environment if we want to survive for the long run.

ASU Water Polo Advanced in the NCAA Tournament with a win over Michigan, and will face USC tomorrow in the Final Four. ... ASU Water Polo Advanced in the NCAA Tournament with a win over Michigan, and will face USC tomorrow in the Final Four.