What people believe happens after death guides how they think about the Earth and how they behave, including whether they choose to recycle or buy energy-efficient appliances, a new study shows.

Research from Arizona State University and the University of Wyoming has found that religious beliefs about the afterlife predicted how people value and practice sustainability. The study was recently published in Psychology of Religion and Spirituality. 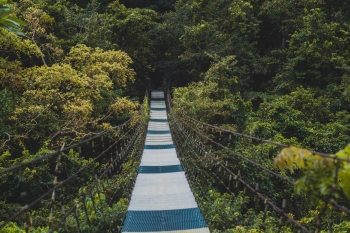 “The importance of sustainability is gaining recognition worldwide, with people of all religions focused on making sure how we use resources is sustainable, that we are good stewards of the Earth,” said Kathryn Johnson, associate research professor of psychology. “We found the level of investment in sustainable behaviors was partly predicted by afterlife beliefs: If people believe in reincarnation, they were more invested in sustainability and stewardship.”

The research team of Johnson, Elizabeth Minton of the University of Wyoming and recent ASU graduate Madeline Parde McClernon first conducted in-depth interviews with a group of participants. The group was made up of people of different religions, including Christianity, Islam, Hinduism, Buddhism, Judaism and Sikhism.

“What has been lacking in so much of the previous research is examining people of all these different faith backgrounds in one study – most prior research looks at one, maybe two different faiths, thereby limiting our understanding as to how faith more holistically influences sustainability behaviors,” Minton said.

Interview responses were categorized based on how sustainability was defined and also based on religious beliefs about the relationship between people and the Earth. Religious beliefs did not affect the definition of sustainability — all participants defined it as preserving natural resources for the future — but they did affect why people chose to implement sustainable practices.

Christians, Muslims and Jews indicated that they thought of sustainability as a way to achieve personal independence, especially financial independence. The responses from Buddhists and Hindus emphasized the interconnections between people and the Earth.

“The independence-interdependence distinction is something that has the potential to change the way that sustainable practices are promoted by policymakers, nonprofits and marketers of sustainable products,” Minton said.

The impact of the afterlife

The research team also examined how religious beliefs about what happens after death affected sustainable practices in daily life, an idea that came from McClernon.

“Madeline wondered whether people who believed in reincarnation, who believe that they would return to the Earth after death, would be more invested in the idea that the Earth needs to be a good place to return to. This idea ended up being the foundation of her senior honor’s thesis and of these experiments,” Johnson said.

Belief in reincarnation predicted behaviors like preserving water, volunteering for organizations that promote sustainability, or choosing to buy energy-efficient appliances. Belief in heaven was related to fewer sustainable practices and less general concern for the environment.

“Our results show that if a person believes in reincarnation, as opposed to believing they will leave Earth after death, they are a lot more invested in making sure the Earth is a good place to come back to,” Johnson said.

Despite differences in religious beliefs, the study participants had one thing in common: Many cited personal benefits of sustainability practices.

“We were surprised that, regardless of religious beliefs, people indicated they engaged in sustainability practices because it benefitted them in some way,” Johnson said. “This finding suggests that communicating the personal benefits of sustainability could be used to increase environmentally friendly practices.”

This work was funded by a grant from Barrett, The Honors College at Arizona State University and from the Sustainable Business Practices fund at the University of Wyoming.

During the height of the COVID-19 pandemic in August 2020, when Arizona State University's Tempe campus was at a standstill and students and faculty were preparing for another semester of virtual learning, Ariana Afshari started to paint.A neurobiology major pursuing a minor in civic and economic thought and leadership, Afshari was looking for an opportunity to show that she was well-versed in mor...

During the height of the COVID-19 pandemic in August 2020, when Arizona State University's Tempe campus was at a standstill and students and faculty were preparing for another semester of virtual learning, Ariana Afshari started to paint.

A neurobiology major pursuing a minor in civic and economic thought and leadership, Afshari was looking for an opportunity to show that she was well-versed in more than STEM, philosophy, politics and economics — she is also an artist. 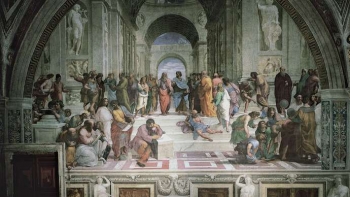 Plato and Aristotle surrounded by philosophers, detail from School of Athens, fresco by Raphael, 1508–11; in the Stanza della Segnatura in the Vatican. Image: Erich Lessing/Art Resource, New York. Source: https://www.britannica.com/topic/School-of-Athens

“It makes sense to explore different avenues like art in the same way we would study ancient works,” Afshari said. “In a lot of ways, I don’t think students think they work in tandem but they do. This project has really made it possible for me to demonstrate to other students that art can also work in the same way to analyze history, politics and philosophy.”

When the School of Civic and Economic Thought and Leadership developed their Coor Texts Reading Room, Afshari approached the school’s director, Paul Carrese, to ask if she could paint something for it. That something is a 60-by-40-inch canvas mural inspired by "The School of Athens" by the Italian Renaissance artist Raphael.

“Arianna's work is a great example of SCETL students integrating their learning with their everyday lives, and integrating different disciplines," Carrese said. "The Coor Texts Reading Room is a space for our students and faculty to study, read and talk about their classes, as well as the wider world. Arianna is a scientist inspired by her SCETL studies to think philosophically across the span of human inquiry. We're so thankful she has contributed this splendid statement about SCETL and higher learning." 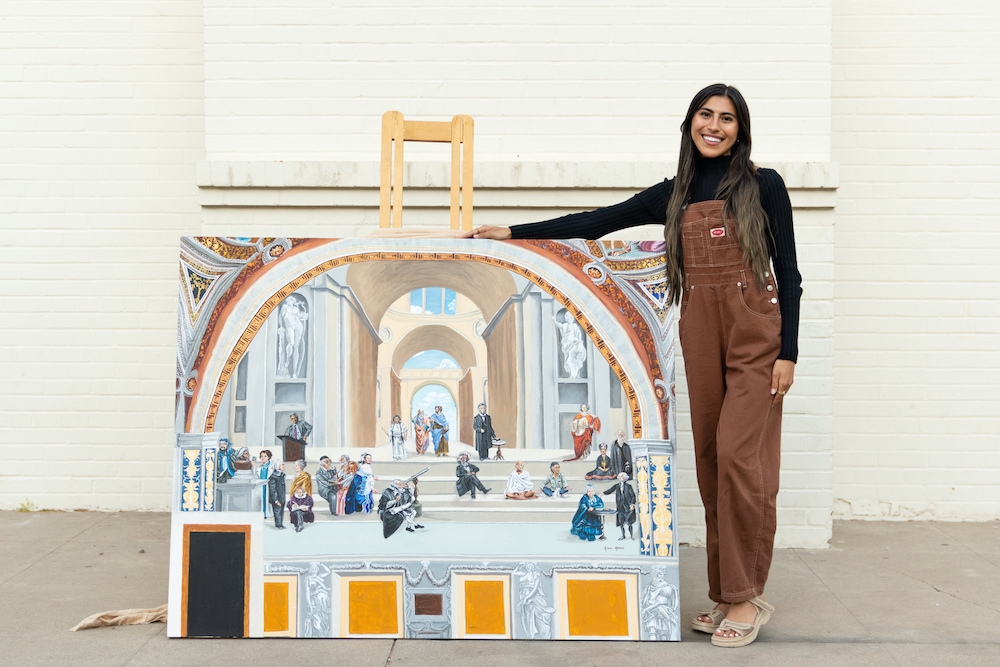 Ariana Afshari stands next to her artwork. 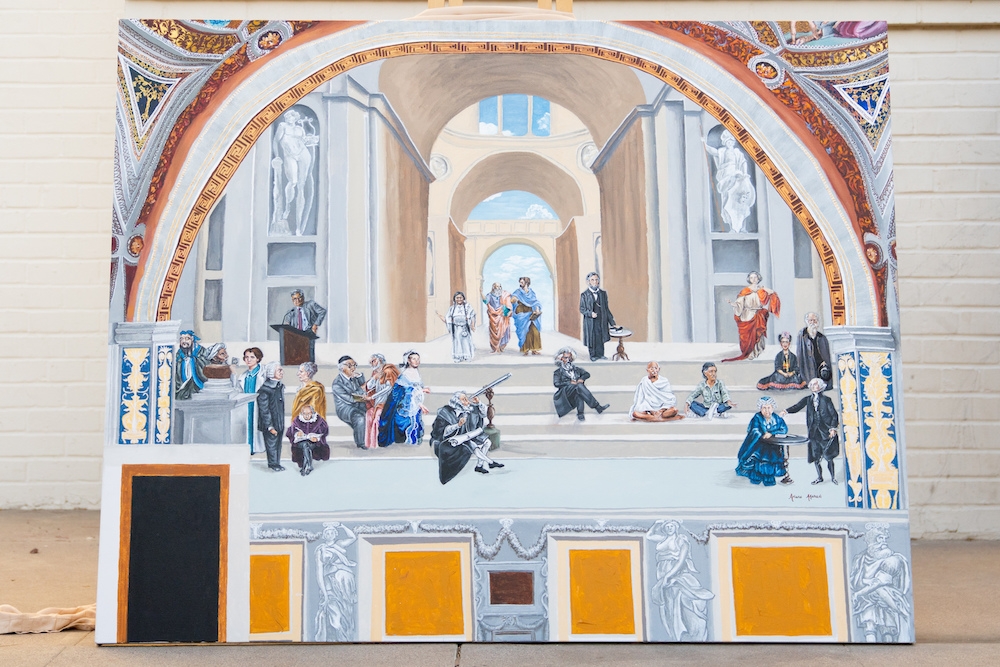 “With history, you have the benefit of knowing so much about the context, so many details, facts and figures, but you cannot really imagine what it might look like when you were there. Art has this profound way of making it more multidimensional and that’s the beauty of it,” Afshari said.

Over the past 10 months, Afshari has re-created Raphael’s masterpiece but with a SCETL twist: In addition to Plato and Aristotle, Afshari added Abraham Lincoln, Gandhi, Elizabeth Cady Stanton, Cesar Chavez, Frederick Douglass, Frida Kahlo and other prominent historical figures.

The mural now hangs in the Coor Texts Reading Room, which is open to all Arizona State University students and faculty. Many items in the Reading Room are available through generous long-term loans made by the School of Civic and Economic Thought and Leadership faculty members. You can view the catalog here.

In addition to working on the mural throughout the year, Afshari also worked part time as a pharmacy technician, served on the Undergraduate Student Government as the director of health and wellness, was an Eichler Scholar through the Dartmouth Health Care Foundations, an IGNITE Fellow for Teach For America and a WINURE Neuroscience Research Scholar for the School of Life Sciences.

“This has served as a break for me,” Afshari said. “It was a nice opportunity to explore my passions and find something good in something really bad … I am proud of myself and I’m really excited for everyone to see it and admire it, and hopefully derive something cool out of it that I didn’t even intend.”