Life after college looks different for every student athlete. Some may move on to the pros. Others will put their sports-playing days behind them as they graduate into unrelated careers.

But some student athletes competing in intercollegiate sports at Arizona State University are putting their athletic capabilities to work in closely related fields taught in programs offered by the School of Community Resources and Development. Here, the goal shifts to improving lives rather than scoring the most points. And, students quickly realize these degree programs can lead to satisfying full-time careers in rewarding, fun jobs that affirmatively answer the question, “I can get paid to do that?!”

School of Community Resources and Development Assistant Professor Eric Legg said student athletes who are majoring at the school are learning to apply their skills to develop youth sports programs, work in sports tourism or sports events, manage sports in parks or run sports-related nonprofits.

“We love having student athletes in our program because they understand the power of sport in individual lives and communities,” Legg said. “Sport intersects with so much of what we do in (the school).”

When senior varsity tennis player Ilze Hattingh first arrived at ASU from South Africa, she hadn’t yet given too much thought to her post-tennis plans or what courses would be best for her.

“I hadn’t looked into them. All I was here for was to play college tennis,” said Hattingh, a parks and recreation management major.

Hattingh said she came into her parks and recreation studies without knowing too much about the field.

“At first I didn’t know what it actually is,” Hattingh said. “What is recreation? It’s not a term we use back home. For some reason I decided to stick with it. It challenged me intellectually as well.”

But parks and recreation study fit well with her practice and match schedules. As she learned more, she came to see its possibilities for her after graduation, particularly in helping people with disabilities enjoy and excel in sports.

Hattingh said she worked with people who not only play wheelchair tennis, but are among the best in the world at it, while interning with the Phoenix-based organization Ability 360, which helps empower people with disabilities.

“It’s amazing how it all fell into place, getting into the chair myself and relating it to able-bodied tennis and the way I’m coaching,” she said. “I can take someone who has never played it in their life and teach them how to move in the chair, how to hit the ball.” 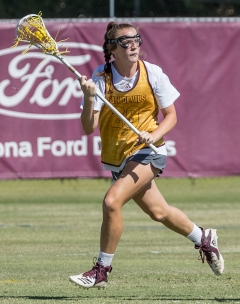 Having played tennis for 17 years, Hattingh said she’ll be glad to be transitioning from competing herself to putting her energies into wheelchair tennis. She already has plans to return to South Africa to start working with people in that sport as well as wheelchair versions of other sports. Hattingh said she also is preparing to work with her brother, a rugby player who competes in Europe, to start a mobile gym that will include offering wheelchair rugby.

Hattingh said her ASU experience has given her confidence in a bright future for herself.

“I can’t even explain how excited I am for the future now. All these doors have opened,” she said. “I had been looking into a wall without knowing where to go. But now so many doors have opened for me, and now it’s a matter of which door shall open?”

Hanna Schuler, a senior majoring in community sports management, plays for ASU’s women’s lacrosse team. The Charlottesville, Virgina, resident started her freshman year as a marketing major, but as her time in those classes went on, she realized she couldn’t picture herself in a job that didn’t involve sports.

“I wanted to get into sports marketing, where the players are. I wanted to know what happens behind the scenes where I couldn’t see,” Schuler said. “So I found community sports management. It’s perfect for where I’d like to be.”

Schuler recently spent a day following the social media specialist for the lacrosse squad, and said she became hooked.

“They showed us how they are event operations managers, what they do and how they do it,” Schuler said. “I learned what goes into it, not just the fun glamorous part.”

Schuler said her current major is teaching her about business marketing, but as it pertains to sports. “It lets me learn the business side but still be in the major,” she said.

Schuler said the discipline of athletics has helped her be an organized learner.

“Between class, (weight) lifting, practice and homework, I learned to be very organized in college,” she said. “I have to be very interested in what I’m learning but be disciplined to get everything done.” 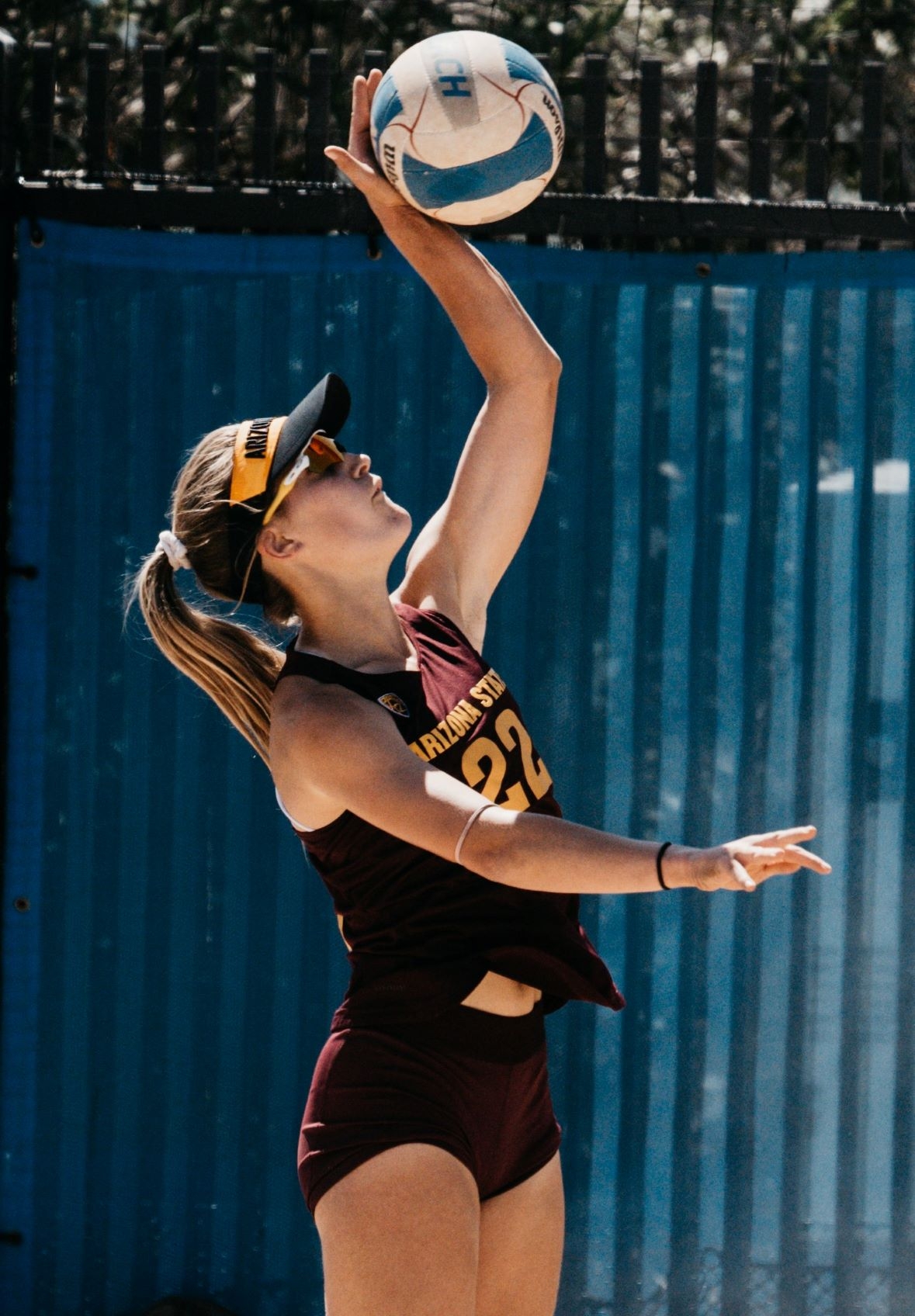 In the fall Schuler will be working for Sun Devil Athletics, helping with marketing for lacrosse and two other sports and working behind the scenes. “I’m really excited about that,” she said.

‘I love what athletics has brought me’

Emily Anderson said she sees a definite link between her nonprofit leadership management major and event planning minor and her playing for the Sun Devil beach volleyball team.

The senior from Las Vegas said she worked in program management with the Phoenix-based Make-A-Wish Foundation, which helps provide memorable experiences for seriously ill children.

She will work as a microevent planner over the summer before heading on to pursue graduate studies in California.

“When I have the opportunity to plan events, I love what athletics has brought me. You learn to talk to people and find common ground,” Anderson said. “I took my work ethic from volleyball. I get to use my past experiences to help those who love volleyball as much as I do to get them where they want to be one day.”

Danko Šipka, professor of Slavic languages and applied linguistics in the School of International Letters and Cultures at Arizona State University, has received a Fulbright U.S. Scholar Program award to Serbia for the next academic year.Šipka, whose research interests include lexicography, lexicology, linguistic anthropology and lexical and inflectional morphology, will be spending May and ...

Danko Šipka, professor of Slavic languages and applied linguistics in the School of International Letters and Cultures at Arizona State University, has received a Fulbright U.S. Scholar Program award to Serbia for the next academic year.

Šipka, whose research interests include lexicography, lexicology, linguistic anthropology and lexical and inflectional morphology, will be spending May and June of 2022 and 2024 in the Serbian Language Department of the University of Belgrade in Serbia. “Serbian and other Slavic studies are central in my research and the most prestigious venues where research and teaching in Serbian studies are conducted are in Serbia, so my going to University of Belgrade is like a scholar of English going to Oxford or Cambridge.” Founded in 1946, the Fulbright Program is one of the most prestigious international exchange fellowship programs in the world. A program of the U.S. Department of State’s Bureau of Educational and Cultural Affairs, Fulbright supports academic exchanges between the United States and more than 150 countries around the world. The Fulbright U.S. Scholar Program sends American faculty members, scholars and professionals abroad to lecture or conduct research for up to a year.

Šipka has had a long-running and impressive relationship with Fulbright. “I was on Fulbright very early in my career in 1987–88 at the University of Illinois and the University of Pittsburgh, coming from Yugoslavia. Now, I am going in the opposite direction to the capital of that country that sadly does not exist anymore.”

Šipka’s engagement with Fulbright has continued throughout his career. “I hosted two junior Fulbright Scholars from Russia and Uzbekistan, and I have been on campus Fulbright committees every year for well over a decade,” he said. Šipka has also served as an evaluator for Fulbright Seminars Abroad applications for the Department of Education and has recently run workshops for Fulbright Foreign Language Assistants coming to the United States from all around the world. “These experiences, in particular my first Fulbright that helped with my dissertation research, were transformative in my career,” he said.

For this professor of Slavic languages, the pleasure of working with different student populations and doing research in different academic settings around the world has been extremely enriching and rewarding, and he encourages students and other colleagues to pursue the opportunities that Fulbright programs have to offer. “ASU has an excellent office that supports these endeavors and that has had enormous success in helping students secure these prestigious grants,” he added.

Arizona State University is a perennial top producer of Fulbright award recipients, and in the 2020 cycle, ASU was one of only 10 universities that were top producers for both Fulbright Scholar awards for faculty and Fulbright U.S. Student award recipients. The Office of the University Provost works with ASU faculty members who are seeking Fulbright Scholar awards, and the Office of National Scholarships Advisement supports and advises current students and alumni who are seeking awards through the Fulbright U.S. Student Program.

The office provides extensive resources to ASU student applicants, including a specialized Canvas page, one-on-one advising, webinars and writing workshops. Interested ASU students should watch the "Getting Started" YouTube series. They are also welcomed to make an appointment with an adviser at bass.barrett.asu.edu. The campus deadline is early fall. Those with a conferred PhD degree should contact Karen Engler (Karen.Engler@asu.edu) about the Fulbright Scholars Program.

Photo courtesy of the Office of National Scholarship Advisement