Mathematics was not David Polletta’s first choice of major in college; he was originally drawn to both music and philosophy. But as he progressed in his studies, he realized he could combine what he loves about those disciplines into one under mathematical exploration. 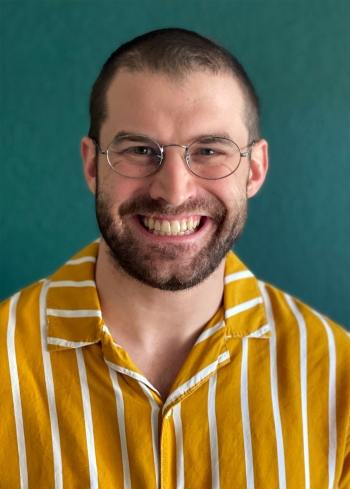 This spring, David Polletta graduates from The College of Liberal Arts and Sciences with his PhD in mathematics. Download Full Image

Now graduating with his PhD in mathematics from The College of Liberal Arts and Sciences, Polletta is the recipient of the Graduate Research Award and the Outstanding Teaching Assistant Award from the School of Mathematical and Statistical Sciences at Arizona State University.

“I find a great deal of comfort in the old adage ‘A picture is worth a thousand words,’ so naturally I was drawn to topics in geometry,” said Polletta.

His research deals with geometric group theory, which is the study of groups as geometric objects. He describes it as telling a person in an existing space all the possible ways and directions they can move around, and all the possible paths that will get them to the same location. He describes at a discrete level, similar to taking steps one by one, what those sorts of motions look like.

Polletta has a solo paper, “Presentations for the Euclidean Picard modular groups," published in Geometriae Dedicata.

The main reason Polletta came to ASU was the research interests of the professors. His current adviser, Associate Professor Julien Paupert, was one of only a few professors at various institutions who works in hyperbolic geometry, which was Polletta’s main area of interest coming into graduate school. His sister lives in Scottsdale, and he did not want to pass up a chance to reunite with her. Also, the beautiful climate in Arizona was a factor.

“When I realized I would never have to shovel snow again, that also played a role in my decision in coming to Arizona State," said Polletta.

“His passion for math and in particular geometry, combined with endless curiosity and hard work, has allowed him to overcome many obstacles to obtain research results that seemed out of reach,” said Paupert. “David has done great work in his five years at ASU, as a graduate student and teaching assistant as well as overall school citizen and community member.”

“My academic brother, Joseph Wells, won the Outstanding Teaching Assistant Award in 2018 during his graduate studies at Arizona State,” said Polletta. “I would not be who I am today without his influence, and I feel incredibly honored to receive the same award he did.”

After their first meeting, Polletta was drawn to how warm and inviting Wells was, offering to help with any questions. He was impressed with how Wells prepared his notes and organized his classes, as well as how he budgeted time for key responsibilities of research, teaching and service.

“I took the things that he was doing and modeled a lot of my own practices after those. From the first time I set foot on the ASU campus for TA training to when he graduated, he was showing me how to do things and helping me out along the way,” Polletta said.

Many lecturers also made an impact on him, including Principal Lecturer Paul Vaz, who passed away in January.

“It was funny during TA training, he really thought the way that I was standing was hilarious,” Polletta said. “I would pause and ask questions and point to the people in the room, and I guess he thought I looked like Captain America. After that, he would keep calling me Captain America every time he saw me in the hallway.

“He really had this knack for being a compassionate teacher and knowing when to be tough, and at the same time, knowing when to give some leniency and have more of a nurturing role. He taught me a lot, and I surely do miss him.”

Polletta said he was impressed with how John Jones — his professor for the abstract algebra sequence  — had his lessons prepared and his fluency in moving through all the material.

“I think Jones is the best teacher I've ever seen with being able to organize everything in such a way that you don't sacrifice any understanding, but make up all sorts of gains in time and material covered,” he said.

Polletta was born in Ohio but grew up primarily in Cary, North Carolina. Both of his parents were teachers at some point in their careers. His mother was an English teacher for most of her life. His father taught mathematics and physical sciences courses and then worked in the pharmaceutical industry. Polletta often helped his classmates with their studies, and not surprisingly, mathematics help was most often needed.

“I could never get enough of seeing the ‘aha!’ moment come across the face of my peers when I assisted them, and I started to think I could do this teaching for a living,” said Polletta.

He had been tutoring since his high school years, but it was not until his first year at ASU that he got to be an instructor for his own mathematics course, MAT 170 Precalculus. Teaching that course made him realize there were some topics that he did not understand as well as he thought. He started to see how teaching is not only for students learning new concepts, but also for the instructors to reevaluate their own understanding and collect a myriad of ways to explain the same topic. He applied those concepts when he taught Calculus I and II for Engineers, and also when he assisted with qualifier courses offered for the incoming graduate students.

“Only the most advanced PhD students are requested by faculty members for these assignments where they are not only assisting the professor but also providing review sessions and other support for the first-year graduate students,” said Katie Kolossa, principal lecturer and graduate teaching assistant coordinator.

For the last two years, Polletta served as a leader in TA training, giving lecture demonstrations and helping to record and critique TA presentations.

“He was an excellent role model and provided leadership for the incoming graduate students,” said Kolossa. “Last summer when we needed to redesign the entire training to remote delivery mode, David and fellow TAs prepared various YouTube videos for the different kinds of lecturing possibilities, such as how to use a smartphone as a document camera, and how to use iPad applications to present lecture notes. He also demonstrated how to use different computer applications to create animations that better explain concepts in calculus.”

“David’s lectures are always clear, easy to follow and enjoyable, even on very technical topics. You can tell that he really cares about his students and their success, and his enthusiasm for math is infectious,” said Paupert. “This is greatly helped by the wonderful pictures and animations he creates for class and lectures, as well as his soft spot for math-related puns. I love the coffee mug he gave me with Euclid's' face and the caption 'Here's looking at Euclid.'”

While an undergraduate at Ohio State University, Polletta met with a distinguished professor to discuss applying to graduate school. The professor told him he had not been enrolled in enough honors classes and his grades in those classes were not all A’s, so he should not bother applying because he would most likely fail out in the first year.

“This meeting troubled me. I wondered if mathematics PhDs were only for the brilliant minds who later had movies depicting their lives,” said Polletta. “This interaction is yet another reason why I want my main responsibilities to be teaching. If I, a straight, white male, was being told I am not good enough for graduate school, I could not imagine what was being told to students from underrepresented backgrounds. No student of mine will ever be brushed off and told they are not good enough. Even if their skills are lacking, I will do everything I can to help them get to the level needed.”

Polletta got married in November and hosted the wedding via Zoom with family. His wife works at a pharmaceutical company, in a career she loves with promising opportunities for advancement.

“I did not want to uproot her entire life and have to move — with the whole ‘spin the postdoc wheel to see where I end up’ type of trajectory,” said Polletta. “I want to do what I can to support her.”

This week he accepted a position as a lecturer of mathematics at ASU and will start in the fall.

“Teaching is my passion. Being able to teach in Arizona is like the perfect setup because my wife gets to keep doing what she's so great at, and I get to do what I love.”

We asked Polletta to answer a few questions about his journey as a Sun Devil.

Answer: My favorite aspect of mathematics is how there are many ways to communicate the same piece of information. I was drawn, no pun intended, to geometry because pictures are my favorite way to represent mathematical concepts, and the transition back and forth between the algebraic, equational side and geometric, pictorial side of concepts has always fascinated me.

Q: What is something you learned while at ASU — in the classroom or otherwise — that surprised you or changed your perspective?

A: Arizona summers are hot; that is not so surprising. However, I was not ready for what 120 degrees Fahrenheit feels like.

A: I remember being anxious before a meeting with my adviser, Dr. Julien Paupert, because I had not made any progress on my research during the week. When I told Julien, he said something along the lines of, “That’s fine; these sort of weeks will happen.” He taught me that progress is very seldom linear, and it is OK to have weeks where you start and end in the same position.

A: Read and research everything you can. Not just familiar subjects, but topics outside of your normal interests. I compare a person researching various subjects to a musician listening to a variety of artists. In either case, listening to a myriad of different voices is an excellent way to find your own.

A: My favorite spot on campus is Engrained Café at the Memorial Union, the official lunch spot of the ASU Geometry Group.

A: I like to spend time with my incredible wife, Brianna, and play and listen to music.

A: I think the general public does not understand how much control one has when doing mathematics. Mathematics often gets painted as a subject restricted by super-rigid rules and procedures. While certain axioms are immutable, the path one takes from assumptions to conclusion can take many different forms. As long as your logic is consistent, and you do not divide by zero and kill us all, the “right” way to argue something is the way that makes the most sense to you.

A: Climate change would be my main focus. In particular, phasing out animal agriculture and transitioning to 100% plant-based agriculture.