The Watts College of Public Service of Community Solutions celebrated in person with nearly 450 graduates May 3 for a part-virtual, part-live spring convocation event that enabled every participant to have their name called and to cross a stage to receive official congratulations for their achievements.

Approximately 1,600 Arizona State University students received bachelor’s, master’s or doctoral degrees from the Watts College’s four schools and interdisciplinary programs unit. Graduates from 2020, whose ceremonies had been entirely virtual, were also invited to the Downtown Phoenix campus for the spring semester’s celebration, which closely mirrored a traditional graduation event, with maroon and gold balloons, a University Police color guard, an a cappella delivery of the national anthem and the ASU Alma Mater played at the conclusion.

The grads-only event kicked off with commencement-video watch parties for physically distanced, small groups of students, professors and staff members in classrooms throughout campus.

Then, classroom by classroom, graduates filed into the University Center lobby, six feet apart, to hear their names called and to cross a stage before an audience of 15 applauding professors. Thousands of friends and family cheered from afar via a livestream broadcast that drew viewers from more than 35 countries.

Dean Jonathan Koppell, Vice Dean Cynthia Lietz and leaders from the schools of  Community Resources and Development, Criminology and Criminal Justice, Public Affairs, Social Work and the college’s Interdisciplinary Programs unit participated in the processional before the graduates received a commemorative photo opportunity and an individually wrapped ASU sugar cookie as they exited.

In his address to the graduating class, Koppell described the event as “a celebration, not of what isn’t, but of what is.” He said the event was something in which everyone connected with the college can take a great deal of pride as adjustments were made to its format to protect public health.

Koppell pointed to a collage of photographs on an upper wall of the University Center lobby depicting the college’s many activities, programs and personalities, including a large image of Ed Pastor, a former member of the U.S. House of Representatives from Arizona. Before Pastor’s death in 2018, the Watts College-based Congressman Ed Pastor Center for Politics and Public Service was named for him.

“This is a little bit different than what we normally do,” Koppell said. “But you know what? I’m moved all the same. And sitting here and looking above at the pictures of some of our friends — I see Congressman Ed Pastor smiling down — I can’t help but think about how pleased he’d be at this ceremony and the success of our graduates.”

Earlier in his remarks, the dean talked about the importance of the day to each person receiving a diploma.

“This is an affirmation of all of the work our graduates have done to get here today. And quite frankly, it has been instructive to me how important it is to our graduates to walk across this stage,” Koppell said. “And I think I do understand why it matters. It matters because it marks the delivery on a promise the graduates made to themselves: that if they were able to stick with it, to work hard, to overcome diversity, to struggle through moments of doubt, that they would reach this moment and walk from one side of the stage to the other, receive a diploma, receive this recognition of the fortitude that they displayed, in the belief they would have that this day; this walk across the stage would come and was being delivered upon.”

From that, Koppell went on, there is a broader message for the graduates and for the college.

“We live in an unusual time when the politics of fear and the looming threat of a global pandemic that has a particular resonance in our communities — where we know that the suffering has not been proportionate across all our peoples and our college has been severely affected by the coronavirus — means that there is all the reason in the world to be consumed by fear and doubt about the future. And yet the only path forward is to remain optimistic regarding the future, to believe that tomorrow can and will be better than today,” Koppell said.

“It is that spirit of optimism that gets somebody through a degree program when everything seems to be stacked up against them. And our graduates this year have more than enough reason to point to the extra burdens that they had to endure to get here today. And yet they persisted, because they believed that as difficult as it was, they would get through it, and that it was worth getting through it,” Koppell said. 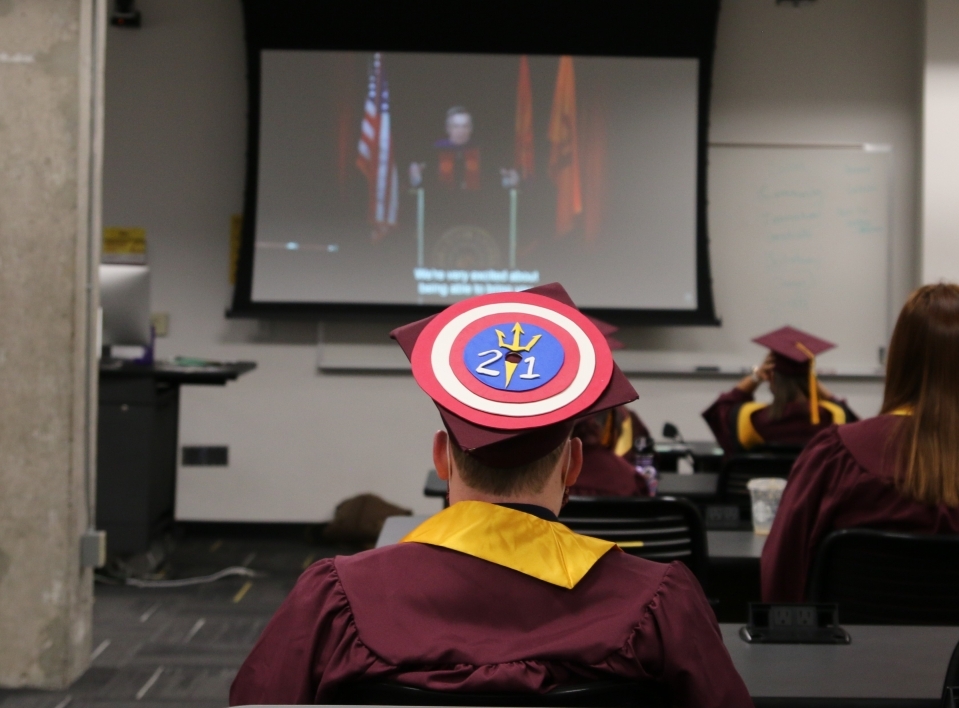 One might argue all students graduating during a pandemic are superheroes ... Watts College graduates listen to remarks from Arizona State University President Michael Crow during their spring 2021 convocation celebration May 3. 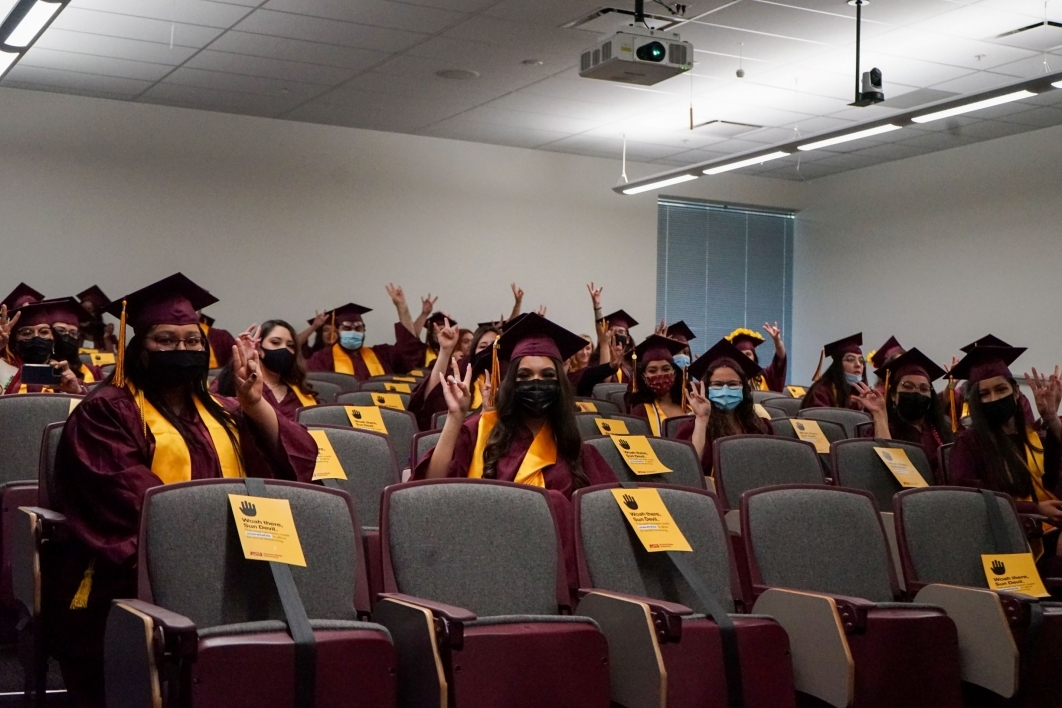 Watts College of Public Service and Community Solutions graduates attend a watch party during their convocation celebration May 3. 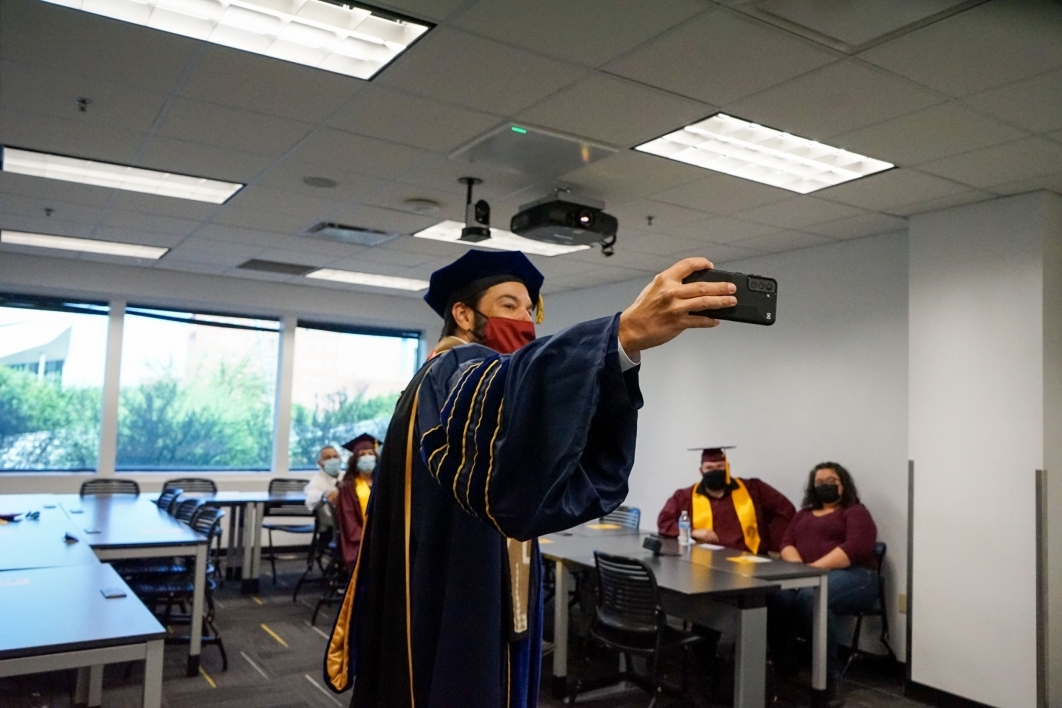 Dean Jonathan Koppell takes a selfie with spring 2021 graduates of the Watts College of Public Service and Community Solutions on May 3 at the college's celebration. 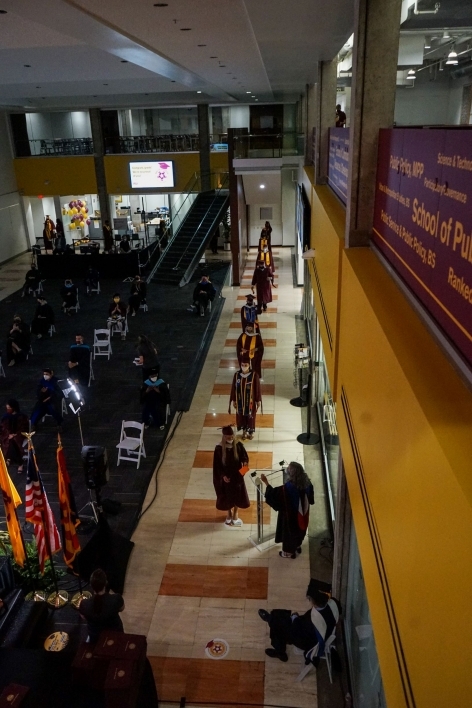 Watts College graduates walk into the University Center lobby May 3 before crossing the stage to receive congratulations. 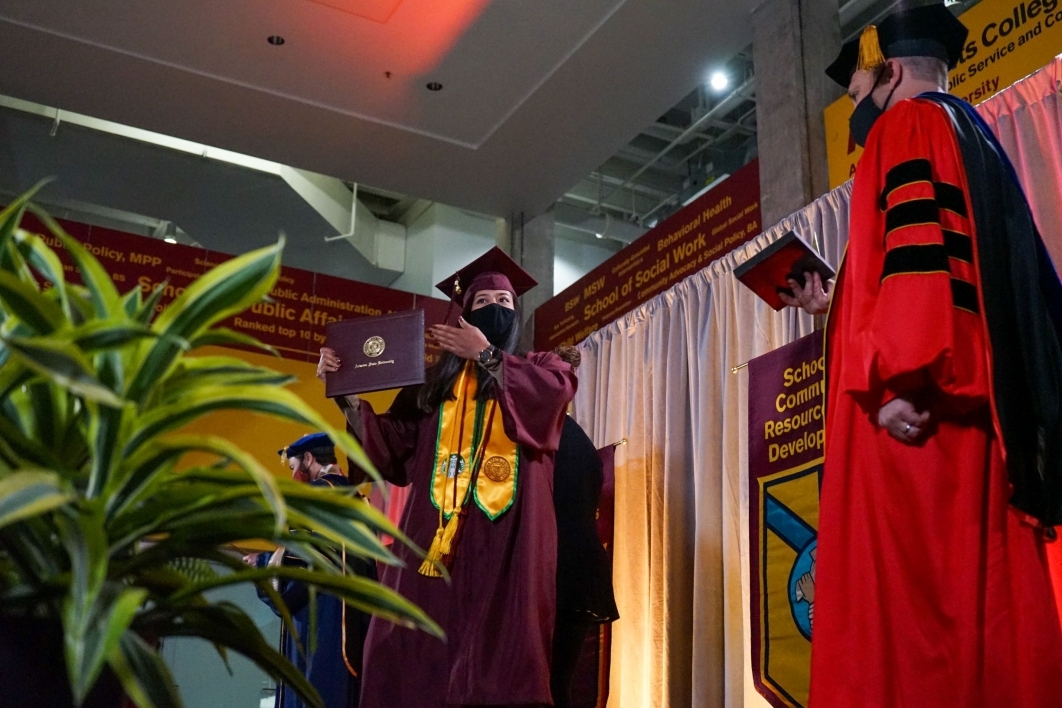 A graduate displays her diploma cover while Watts College Associate Dean William Terrill (right) prepares to greet her May 3 during the spring 2021 celebration. 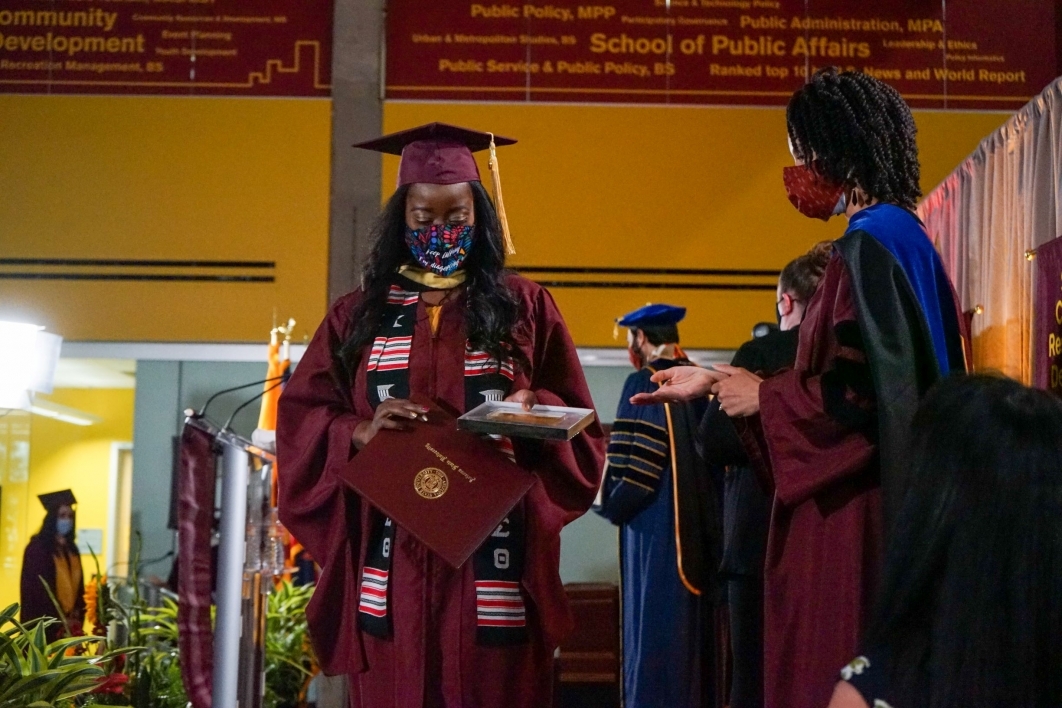 Christine Buzinde, director of the School of Community Resources and Development, congratulates a spring 2021 graduate. 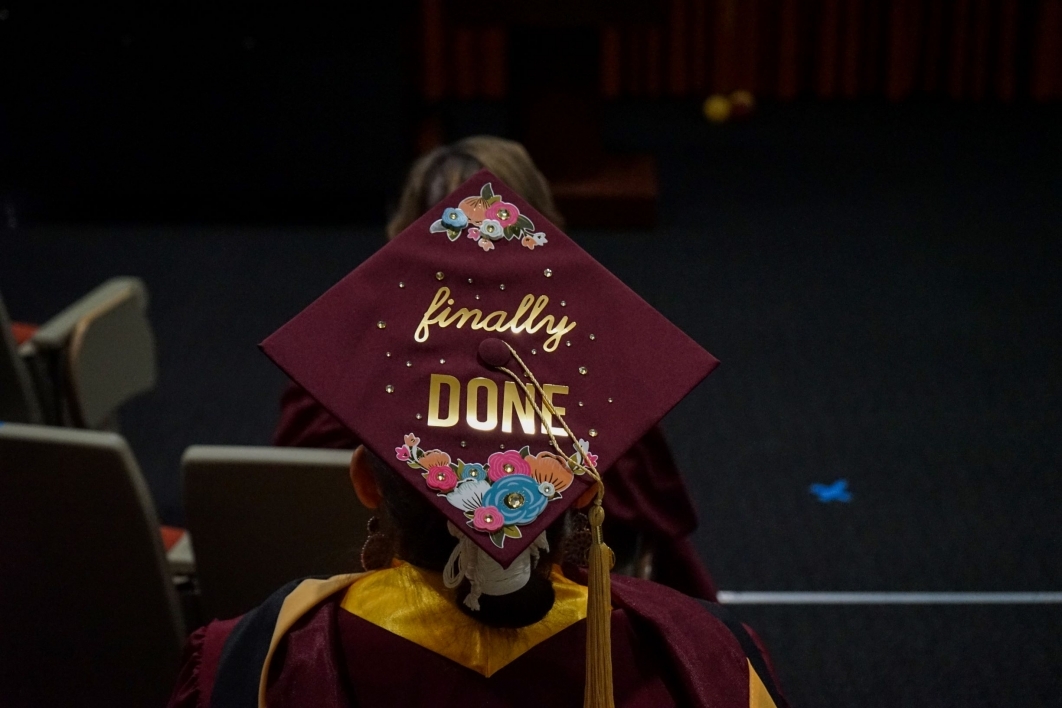 The mortarboard of a spring 2021 Watts College of Public Service and Community Solutions graduate shows a message of gratefulness that studies have been completed. 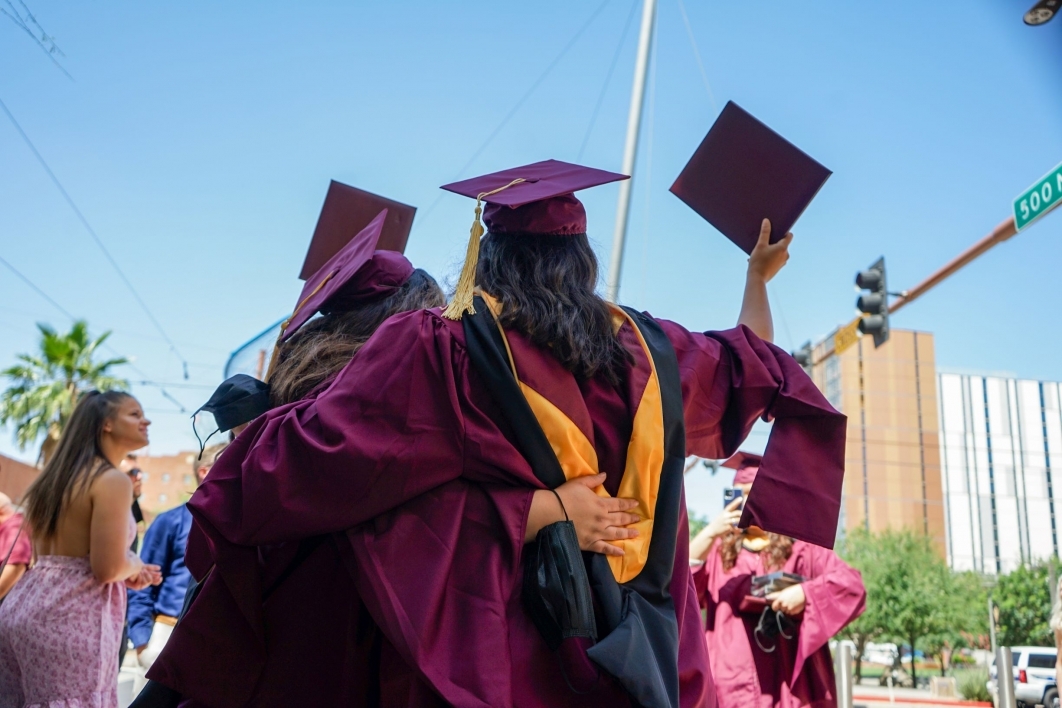 Watts College graduates celebrate outside the University Center on the Downtown Phoenix campus May 3.

Graduates who attended the celebration said afterward they appreciated being recognized for their achievements in person.

Leonor Camarena received her PhD from the School of Public Affairs and is now an assistant professor at Rutgers University-Newark.

“It was incredibly rewarding to be able to return and celebrate this momentous milestone with my adviser, peers and family,” Camarena said. “My experience and achievements as a Sun Devil at SPA are influential in my research, teaching and service work as an assistant professor.”

“I absolutely love my job, and this is the best opportunity I could have imagined to remain at ASU,” Reyes said. “After being in the PhD program for four years and working so hard — and having the privilege of studying at that level — it was so meaningful to be on campus and be hooded by my chair, Dr. Elizabeth Segal. For me that was the culmination of my doctoral studies. Being able to be hooded in person was so powerful. It’s so symbolic to me.”

Another graduate said she was grateful for the people she met and what she learned.

Jailine Sanchez, who received her Bachelor of Social Work degree, said after the celebration that she will value “all the connections I made here that will be good for me in the social work field.”

Sanchez said she is grateful to Tahnee Baker, a School of Social Work lecturer who “showed me what it was like to be empathetic toward others.”

The celebration was presented in three parts. View it online at the following links:

Top photo: Dean Jonathan Koppell congratulates a graduate May 3 at the Watts College of Public Service and Community Solutions spring 2021 celebration at the University Center. Photo by Susan Wong/ASU

George Stoupe's three-set rally catapults ASU to the second round of the NCAA Championships ...