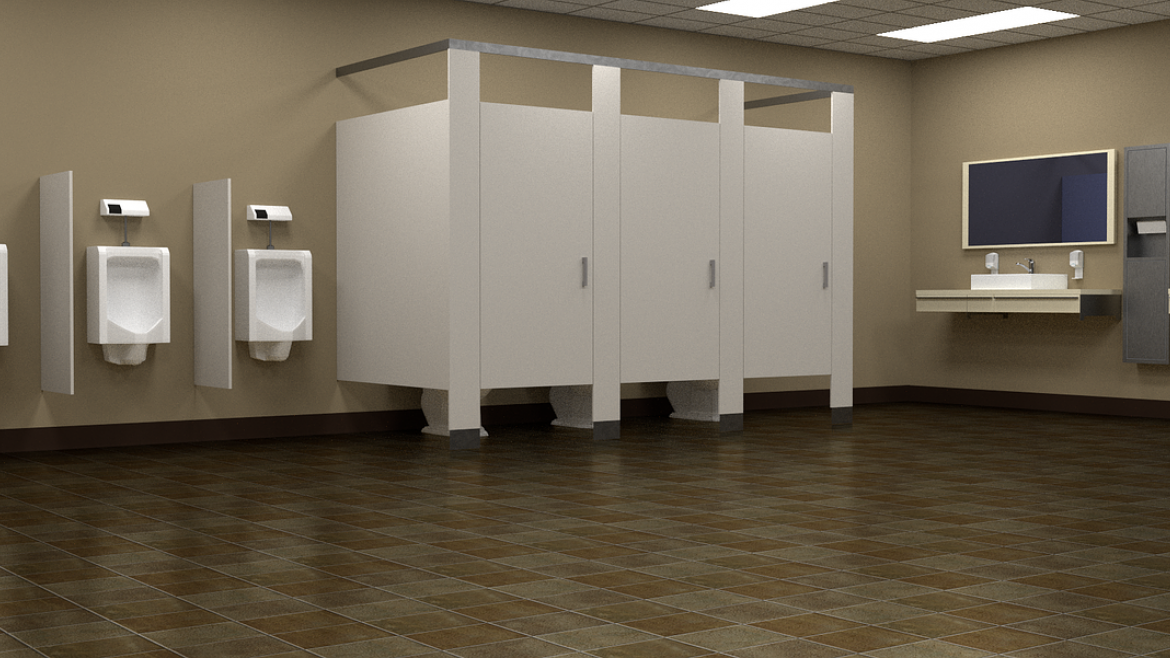 In the late 1980s, University of Connecticut researcher Lawrence E. Armstrong was looking for a way to assess hydration. In his lab, he had laid out several urine samples for analysis when the light coming in the window passed through the containers, casting patches of varying colors on the table.

Realizing the intensity of the colors corresponded to the samples’ concentration, he arranged them in order from light to dark. Thus was born the original eight-color urine color chart, with the lightest color representing optimal hydration.

For decades, the chart has been used in locker rooms around the globe to give athletes a quick and easy way to self-assess their hydration level by comparing their urine sample to the colors on the chart, without the need for a trained investigator with special equipment. However, in the years that have passed since the original chart began circulating, derivatives of it have resulted in charts with skewed colors and questionable accuracy. In two recently published studies, Wardenaar and his team compared their newly designed chart with one adapted from Armstrong’s original, and also tested the accuracy of a separate chart Wardenaar developed that takes into account the length of voiding time and the dilution of urine color caused by water in the toilet bowl.

Wardenaar found only a slight difference in accuracy between the two commonly used multiple-shade charts, meaning athletes can still use Armstrong’s original chart and subsequent derivatives of it to assess hydration and expect fairly reliable results. He also found that the chart he has developed is comparably accurate to Armstrong’s original, meaning athletes can now use his new chart with the added benefit of being able to self-assess their hydration level “at-the-toilet-bowl,” without the hassle of using a cup to collect their urine sample.

“I think the main conclusion is that there is not a lot of difference between the charts, so if you have a well-prepared urine color chart, it probably doesn't really matter which one you use, but you should be aware that there are some limitations,” Wardenaar said.

To test the accuracy of the charts derived from Armstrong’s original, Wardenaar and his team asked 189 participants to self-assess their hydration using both. The researchers then compared participants’ self-assessments to the results of a urine specific gravity testA urine specific gravity test is a laboratory test that health care providers use to check the density of patients’ urine to assess health and test for abnormalities. to determine their diagnostic accuracy.

Both charts scored about 77% accuracy compared with the results of the urine specific gravity test.

To test the accuracy of his own chart, Wardenaar and his team asked the same group of participants to self-assess their hydration level at the toilet bowl using his chart, which depicts three color panels, each representing the color of urine at optimal hydration level for a voiding duration of one to eight seconds, nine to 16 seconds and 17 or more seconds.

Using this three-panel urine color chart, participants selected a panel based on the length of voiding duration, then determined whether their urine sample was lighter or darker than the color depicted in that panel. Photo courtesy of Floris Wardenaar

Wardenaar said these results show that his new, three-panel lavatory urine color chart gives results similar to those of traditional urine color charts, but with the advantage of a more immediate assessment of hydration status because it can be done directly at the toilet bowl, making the method more applicable for the larger population.

The economic outlook for Arizona and the U.S. is promising as the deep recession sparked by the pandemic quickly recedes, according to three Arizona State University experts.“A year ago, we were wondering how deep it would be and how long it would last,” Dennis Hoffman said of the economic downturn brought on by COVID-19.“Now we know: It was very deep but it was very short-lived."Hoffman, ... Tempe campus
Income inequality could be a drag on a strong economy, ASU experts say.
May 7, 2021

ASU experts see optimism and, despite increased costs, no housing 'bubble' in Arizona

The economic outlook for Arizona and the U.S. is promising as the deep recession sparked by the pandemic quickly recedes, according to three Arizona State University experts.

“A year ago, we were wondering how deep it would be and how long it would last,” Dennis Hoffman said of the economic downturn brought on by COVID-19.

“Now we know: It was very deep but it was very short-lived."

The federal government’s economic stimulus checks are a big factor in the recovery, Hoffman said.

“The stimulus data are amazing. Without a stimulus, there would be a deep decline,” he said. “But the forecasters are clear: It’s onward and upward from here. There’s not a lot of debate around that.”

However, Hoffman noted that the recovery has not been equal for everyone.

“During the recovery, the folks making $60,000 or more had a blip and are now back to normal, but for those making $27,000, they are still well below where they were before the pandemic,” Hoffman said. 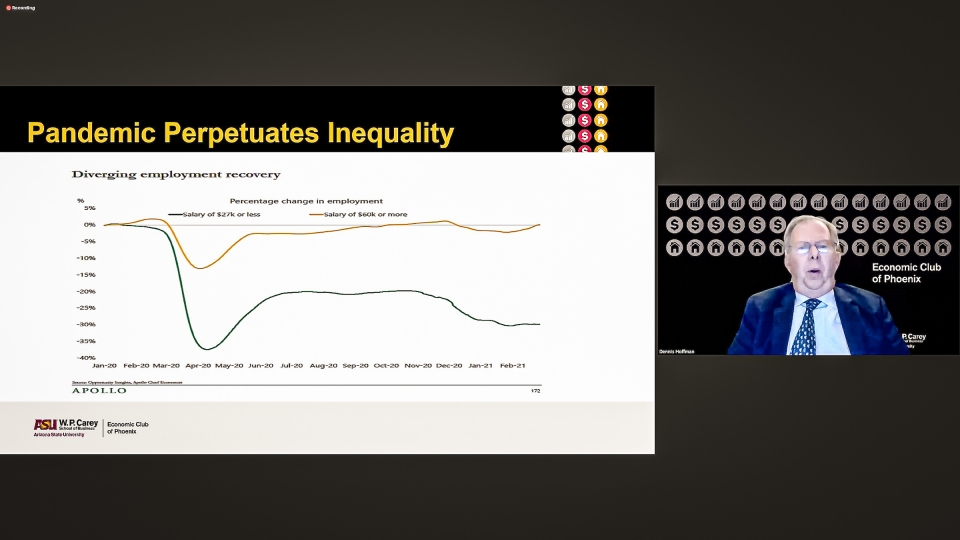 Dennis Hoffman, professor of economics and director of the L. William Seidman Research Institute at ASU, showed a slide that illustrated how the pandemic recovery has exacerbated income inequality. People earning $60,000 or more are doing as well as before the pandemic, while those who earn $27,000 or less are faring much worse. Screenshot by Charlie Leight/ASU News

Hoffman said that some are worried about inflation.

“Many companies are planning to raise prices. Food prices are up. Transportation costs are up. Lumber prices are through the roof,” he said.

“The Fed sees only a temporary price pressure, but no ongoing inflation.”

A quick recovery for Phoenix and the state

The outlook for Arizona and the Phoenix metro region also is good, according to Lee McPheters, research professor of economics in the W. P. Carey School of Business and director of the school’s JPMorgan Chase Economic Outlook Center.

“Arizona went into the pandemic with a rip-roaring economy. We were No. 1 in the country in the rate of job creation,” he said.

He compared the pandemic recession to the Great Recession of 2007–10.

“The Great Recession lost over 300,000 jobs in three years and took five years to recover them,” he said.

The current recession started in April 2020.

“We lost over 331,000 jobs, more than the Great Recession, but we’ve already recovered over two-thirds,” he said. 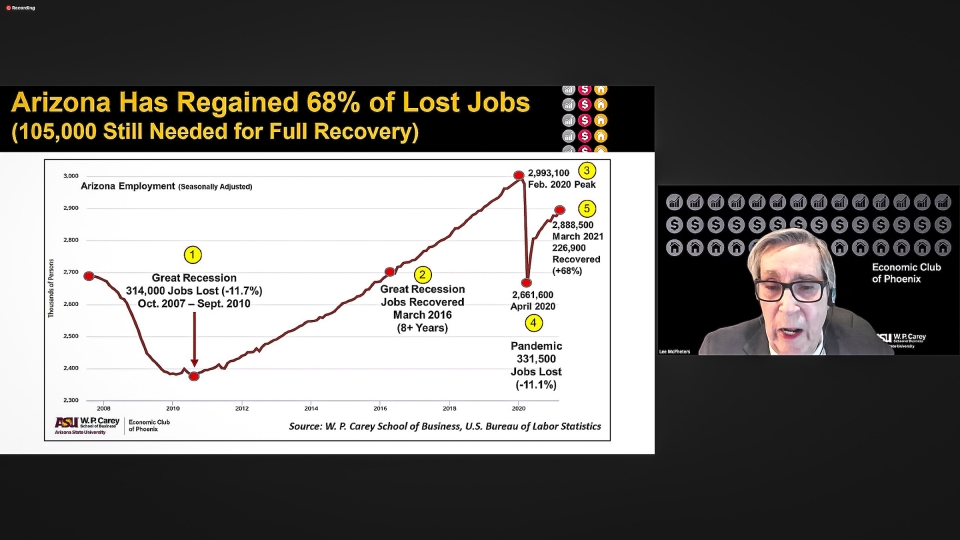 Lee McPheters, research professor of economics and director of the JPMorgan Chase Economic Outlook Center at ASU, showed a slide illustrating the slow recovery from the Great Recession and the deep but brief recession sparked by the COVID-19 pandemic. Screenshot by Charlie Leight/ASU News

Arizona has always depended on migration to the state to drive economic development, McPheters said.

Analysts were shocked when the recent census results showed that Arizona added 774,000 people over the previous decade, and not the million new residents that were expected.

“The big issue for economists is that a lot of government money is distributed on a per-capita basis, and those dollars won’t be going to Arizona,” he said.

While in previous years, construction was the No. 1 growth industry in the Phoenix metro area, right now it’s transportation and warehousing.

“Over 60 million square feet of industrial space is under construction,” he said. “Amazon has signed 11 leases last year alone.”

One exception to the bright outlook is for small businesses, about 30% of which remain closed, McPheters said.

With real estate, experts are now starting to realize which changes wrought by the pandemic will last, according to Mark Stapp, the Fred E. Taylor Professor of Real Estate in W. P. Carey. Among those: 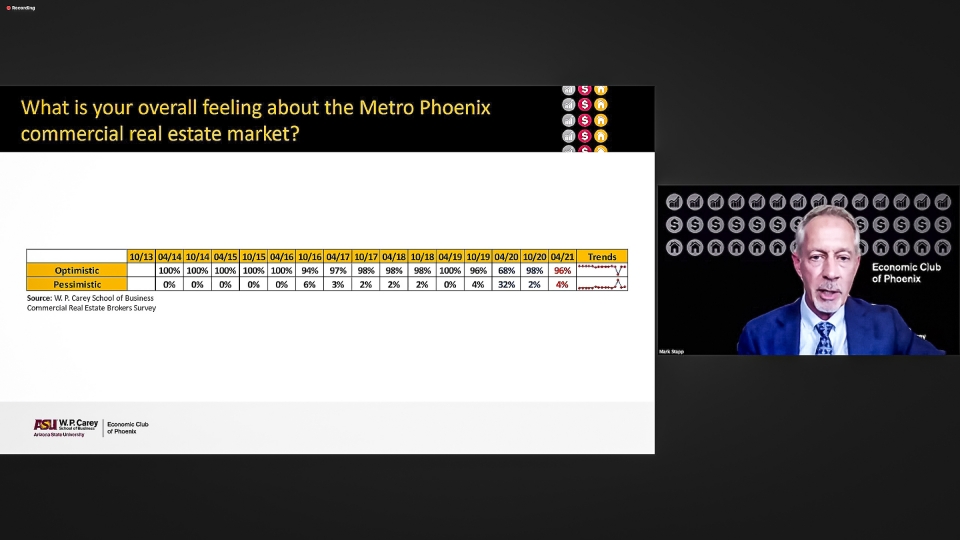 Mark Stapp, the Fred E. Taylor Professor in Real Estate at ASU, showed a slide illustrating the results of a recent survey of commercial real estate agents, showing that 96% are optimistic about the market in Phoenix. Screenshot by Charlie Leight/ASU News

Is there a housing bubble?

ASU’s experts say that there is no housing “bubble” that could burst, leading to an economic freefall like the one in the previous decade.

McPheters said that economic development depends on the supply and affordability of housing.

But compared with California and other places that people are leaving to move to Arizona, the local housing is affordable.

“Even though home prices are up, incomes also are up and mortgage rates are down, so mortgage payments are not in the ‘bubble’ territory yet,” McPheters said.

Stapp said that there are simply not enough houses because the market was underbuilt over the previous decade, while the population was growing.

“We have a supply problem, and that’s not easy to fix,” he said.

“From 2011 onward, it was consuming overbuilt inventory. By 2015, we had consumed most of that and continued to build at very low rates,” Stapp said.

“It’s not a problem as long as we have better wage-earning jobs moving here and as long as interest rates stay low.”

But income inequality could be a risk factor.

“The social concern is that there are winners and losers, and we have to focus on the losers just as much as the winners,” he said.

“It will create a drag on the economy if we don’t pay close attention to it.”