A socially distanced gathering marked the end of their academic careers, the beginning of a return to normalcy

On a recent Friday afternoon in Glendale, Arizona, the quiet stillness that has defined many a college campus this past year was suddenly and joyously pierced by the peal of the Bool Bell, traditionally rung in triumph by students of ASU’s West campus after having completed the last final of their academic career.

“I feel like it’s my wedding day!” shouted one student. “This is way better than your wedding day,” came the reply from another.

Slowly, more students began to join them, arriving in small, staggered waves for a socially distanced but still jubilant Barrett, The Honors College graduation celebration, one of several scaled-down, in-person celebrations held across all four ASU campuses this spring. While the universitywide commencement event remained virtual this year, the handful of in-person events gave many a welcome taste of normalcy.

“It's just a different feeling. I feel like I can feel everyone’s energy right now, and the happiness in the air, which I wouldn't be able to feel online,” said communication graduate Shiwani Sandhu. “Even just little things like seeing the twinkle in people’s eyes when they smile. I love those things! And it means a lot to us graduating that we get to see the faculty here on campus one last time.”

As students in maroon caps and gowns (and face coverings) arrived at West campus that afternoon, they were greeted by faculty in full commencement regalia (and face coverings). Their first stop was the Paley Gates to honor another West campus tradition: Having first passed through them as freshmen, the students now walked through the gates for the last time, complete with a photo op to mark the moment.

Diane Gruber, a principal lecturer in Barrett, The Honors College at West campus, was one of those faculty members waiting to congratulate students on the other side of the gates that day. For her, one of the biggest challenges of teaching during the pandemic was trying to read which of her students were in distress and which were doing OK.

”It was really difficult to do that through Zoom,” Gruber said. But seeing them step into their future now made up for it. “It's wonderful. It's terrible that we can't hug them! But at least we can see them in three dimensions.” 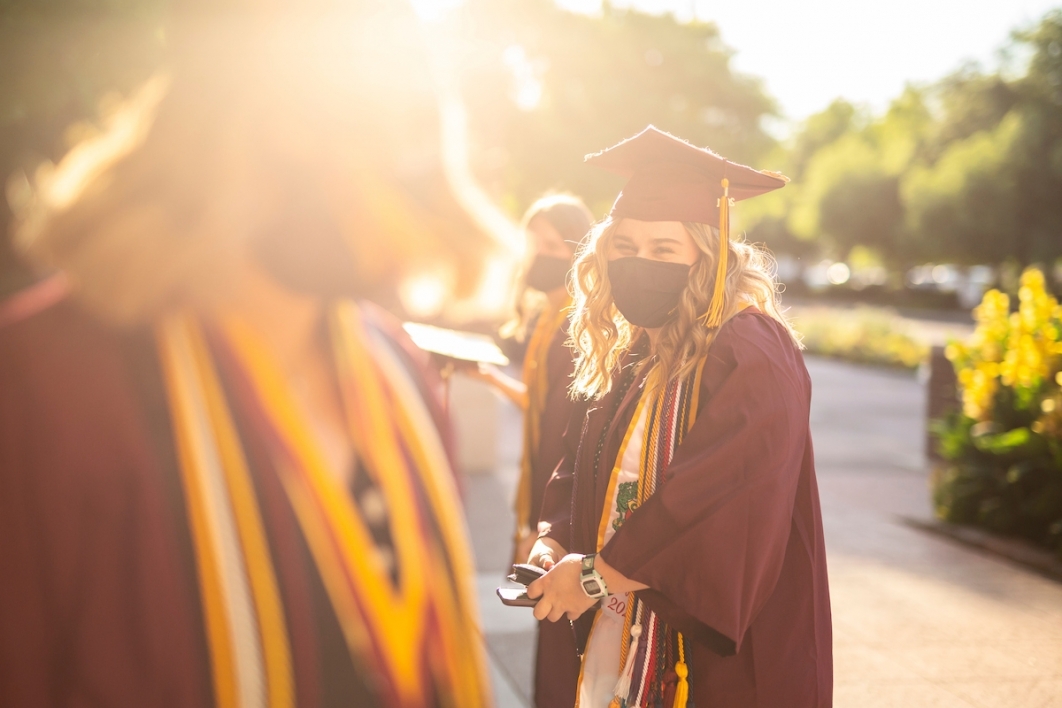 Alayna Dalgleish arrives at ASU West campus’s graduation celebration on April 30, and says hello to a friend. At this event, grads were invited to have their photo made walking through the Paley Gates, a West campus graduation tradition, and ring the Bool Bell, symbolizing that a student has finished their academic journey at ASU. 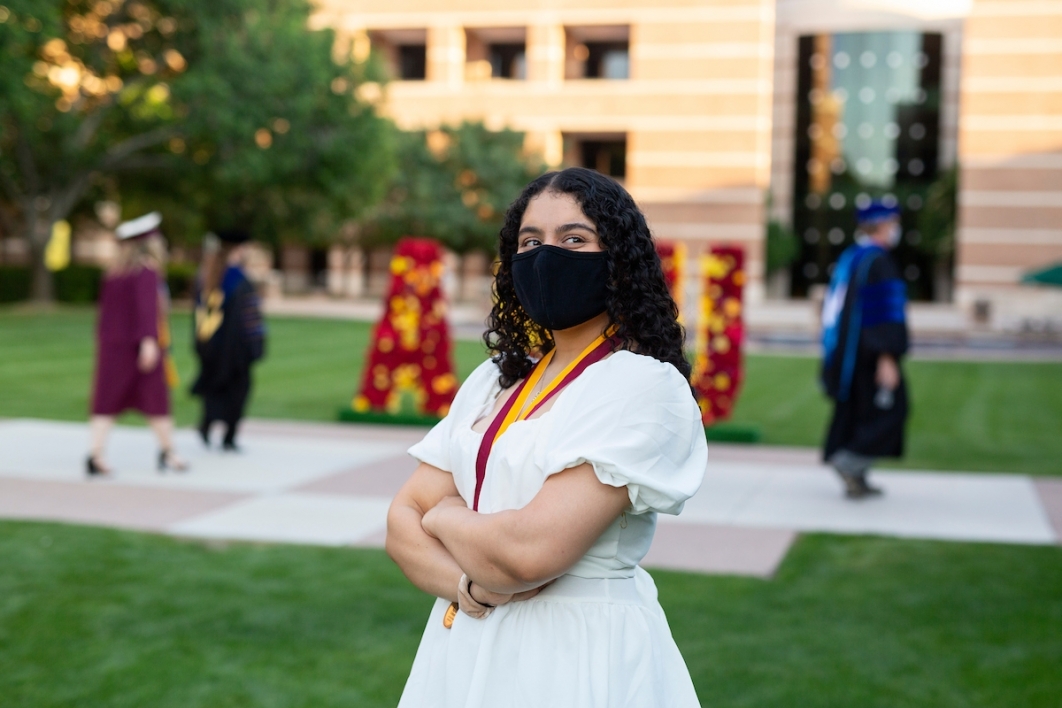 Shiwani Sandhu graduated with her bachelor’s degree in communication. The small, in-person graduation celebration for honors students at ASU’s West campus gave her and other graduates a welcome taste of normalcy. "It's just a different feeling,” she said. “I feel like I can feel everyone’s energy right now, and the happiness in the air." 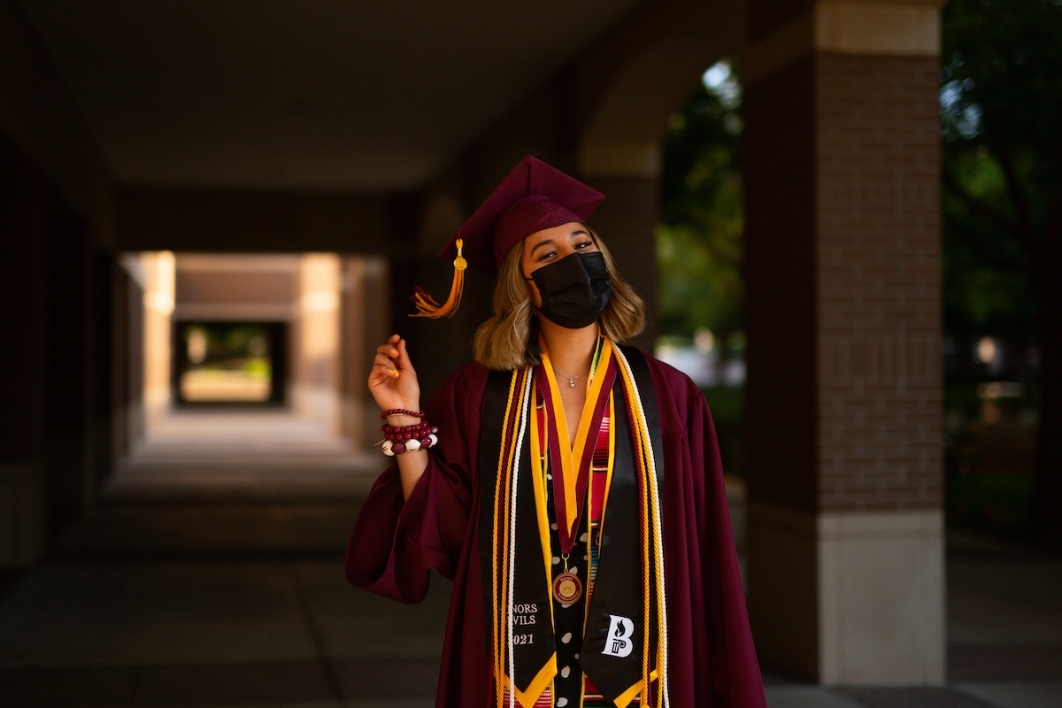 When communication graduate Kaley Zepeda was homesick as a freshman, a staff member gave her an ASU bracelet and told her to hang onto it to wear at graduation. “I’ve been waiting to wear it for four years,” Zepeda said. 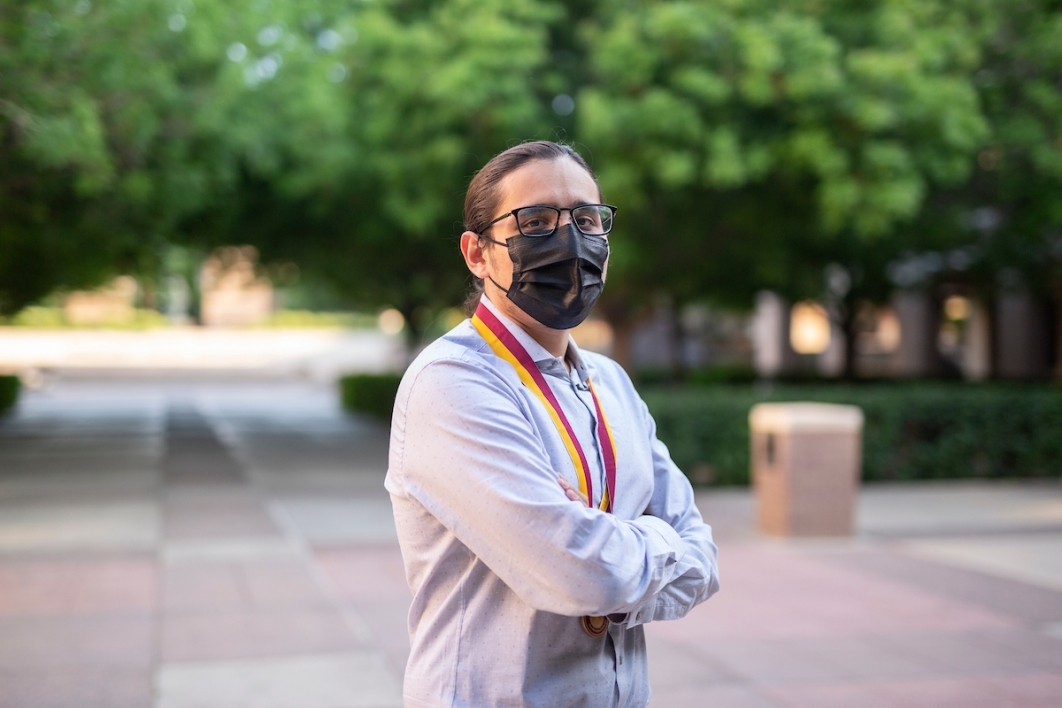 Friday’s celebration was bittersweet for forensic science and biology (pharmacology/toxicology) graduate Demian Herrera-Quiroz, who will begin attending Mayo Clinic College of Medicine and Science in Scottsdale in July. “I'm excited to see where everyone is going, but I'm definitely a little sad to be leaving them,” he said. 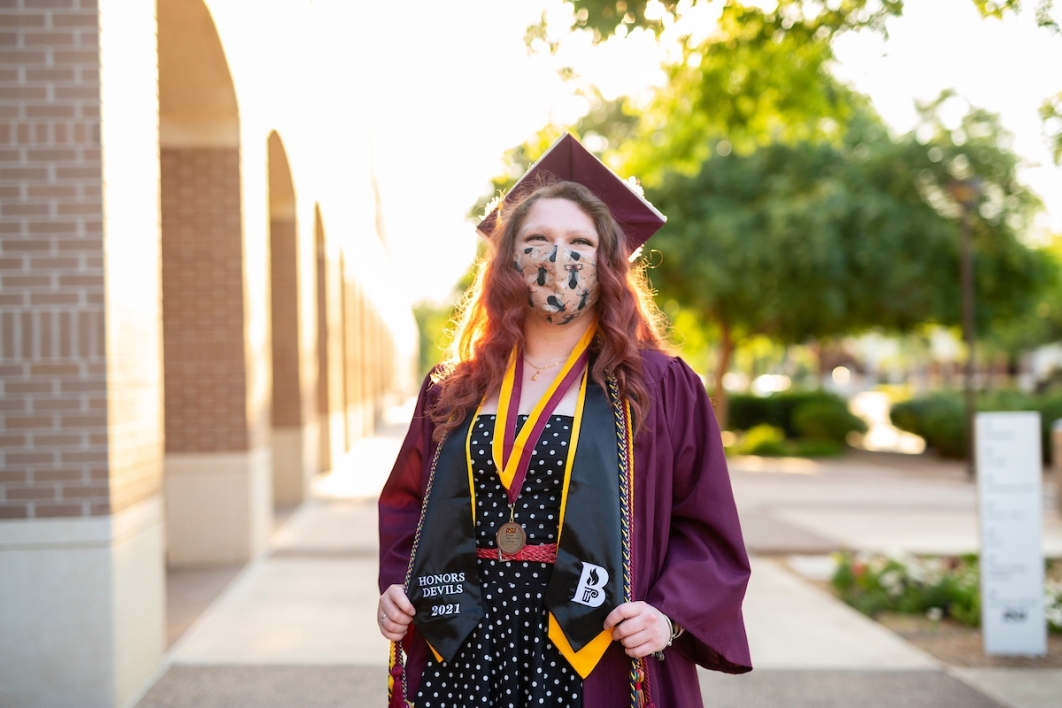 Forensic science graduate Morgan Kincade was appreciative of the resources and accommodations provided to students to help them succeed over the past year. “More often than not, professors were willing to go out of their way to help you in whatever way that they could,” she said. 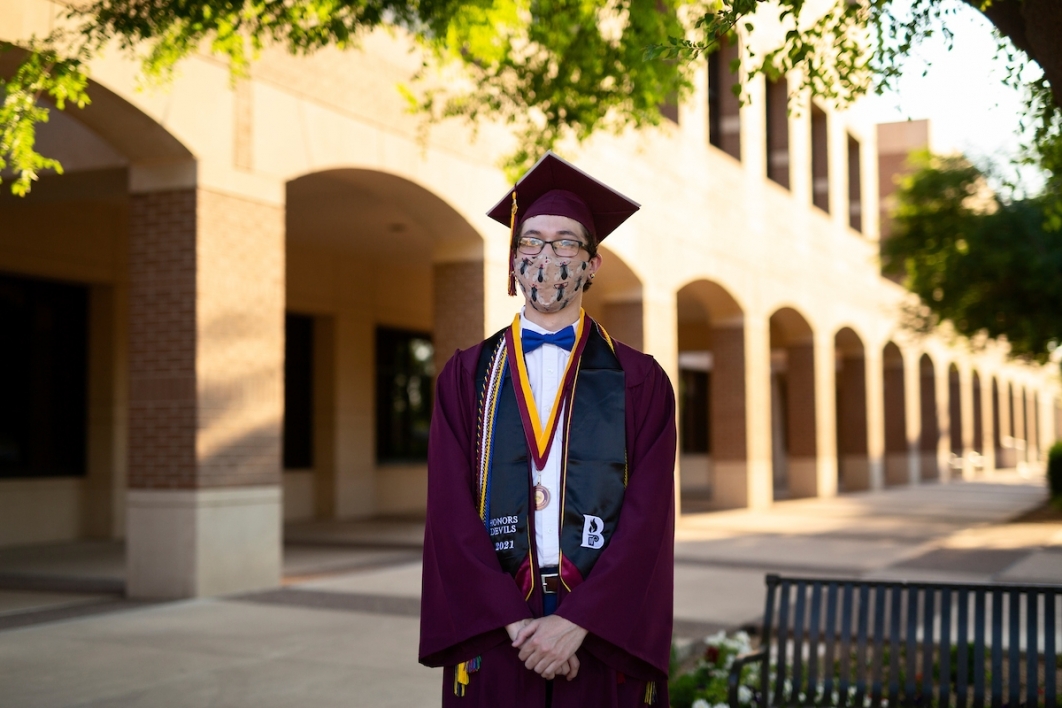 Zoom fatigue and a lack of social interaction weighed on forensic science graduate Andrew Noblesse this past year. It helped to remember the words of his research supervisor: “This was the year of the utmost compassion.” 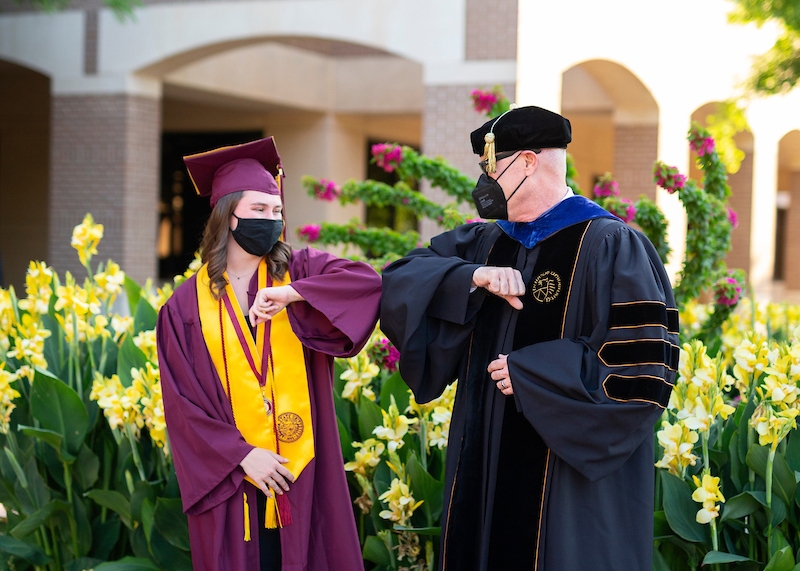 A constant hum of chatter and laughter filled the courtyards at West campus as students moved from the Paley Gates to the Bool Bell to Fletcher Lawn, where a giant flower arrangement spelling out ASU made for another perfect photo op and a smattering of well-distanced tables provided an area to safely enjoy prepackaged meals and one another’s company.

For Kaley Zepeda, graduating with a bachelor’s degree in communication, this day was hard-won. After struggling with homesickness during her freshman and sophomore years, she finally began to feel more at home after becoming a peer leader and finding a sense of community at ASU West’s Communications Lab. Then came COVID-19, and everything — including the lab — went virtual.

“I was a little bit fearful of what it was going to be like, having to reconfigure my peer leader role into a virtual setting,” Zepeda said. “But the CommLab did a wonderful job making it feel just like it did in person.”

A ring of maroon and white beads bearing the ASU logo adorned Zepeda’s wrist that afternoon. It was given to her by an ASU staff member when she was a freshman and still struggling to find her place at the university. They told her to hang onto it so that one day, she could wear it during graduation.

“Every year, I hung it up in my dorm room,” Zepeda said. “I’ve been waiting to wear it for four years, and I’m wearing it today, and I’ll be wearing it Monday when I watch the virtual graduation ceremony with my family.”

Top photo: Barrett, The Honors College faculty pose for a photo during an in-person graudation celebration for honors students at ASU's West campus on Friday, April 30. Photo by Jenny Dupuis/ASU

Arizona State University and Sun Devil Athletics celebrated the important tradition of graduation this week as 104 Sun Devil student-athletes graduated in spring and 26 additional will graduate in summer for a total of 130 graduates. ... Arizona State University and Sun Devil Athletics celebrated the important tradition of graduation this week as 104 Sun Devil student-athletes graduated in spring and 26 additional will graduate in summer for a total of 130 graduates.