Daniel Sanchez’s inspiration for wanting to work in law enforcement or as a first responder came to him when he was a high school student in his hometown of San Jose, California. 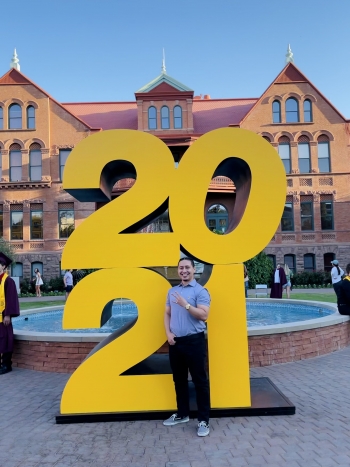 Before attending ASU, the spring 2021 criminology and criminal justice graduate learned what it was like to interact with a helpful and not-so-helpful police officer.

After reflecting on his interactions with both, Sanchez decided to use his experience as inspiration for choosing to study criminology and criminal justice and to pursue his interest in working in the field of law enforcement.

During his time at ASU, Sanchez’s interest developed into a passion. Kevin Robinson, an instructor at the School of Criminology and Criminal Justice, was one influencer of Sanchez’s choice to continue to pursue law enforcement.

“I've had him for a few semesters, junior to senior. He was a cop before he became a teacher. He's actually a really cool, just understanding guy. He's just been a great teacher overall,” Sanchez said.

Currently, Sanchez is applying to several police academies including for the cities of Phoenix, Tempe and Scottsdale. He plans to enroll in EMT classes to perhaps pursue becoming a firefighter instead.

Aside from his passion for law enforcement work, Sanchez was involved in student engagement on campus, working as a desk assistant for Sharon Smith, associate vice president and dean of students at ASU’s Downtown Phoenix campus.

According to Sanchez, his experience working as a dean’s assistant since his first year at ASU was very positive.  Smith was someone he viewed as a role model and guiding hand throughout this Sun Devil experience.

“Freshman year, she definitely was a little harder on me just, you know, to send me on the right path,” Sanchez said.

“When students come in, I help them. I send them to the right person, answer phone calls; I transfer people to who they need to get in contact with. I plan and set up events; I set up rooms for events and just whatever the dean needs as well,” Sanchez said.

His favorite part about both jobs has been getting the chance to be involved in student engagement on campus.

“I just say I really enjoyed my time here at ASU. I wouldn't have changed anything. I feel like I kind of did my thing. But definitely I’m not leaving with any regrets,” Sanchez said.

As he prepared to graduate, Sanchez reflected on his time at ASU and shared advice for other Sun Devils.

A: Probably around high school, my senior year. I was out late with a few friends. And we were just out and about. We were just coming home from a party. We got pulled over. And there was this one cop, he was just questioning us and all this.

But then his partner came out and he was kind of more levelheaded. And he would just let us kind of explain the situation and how we were doing. I guess you could say he had a heart, where he just gave us a lecture and then it was like, "Go on about your night, stay safe."

You know, like whatever you guys are doing, just be careful. You know, don't go crazy. His partner kind of just like, I don't wanna say motivated, but inspired me to join the criminal justice major.

A: In the classroom, I would say everyone has an opinion. So definitely be open-minded. There's definitely two sides to every story. So always look at different perspectives on that and consider other opinions.

A: My cousin. I kind of always looked up to him. He was my role model for sure. He still is, but he's like three years older than me. So I always considered him like an older brother. So he came out here and I kind of just came out here to shadow the school, and he showed me around and I just fell in love with it. And I always wanted to go to school.

He taught me, hey, not everyone's gonna like you. That's what it's gonna come down to. So just make sure you keep your cool, stay understanding, just never escalate the situation. And if you really want to do it, you really need to be in love with the job and try to help people.

But overall, just keep hustling and power through it if it's really what you want to do. Finish it.

I'll be honest, like these last few weeks, I've been waking up every morning just happy and excited. Like, I'm almost done. I made it this far. You know, it's just one chapter in my life that's about to close, and a new one's about to open. So just stay motivated, never give up and just enjoy your college career most of all.

A: The intramural fields. Just going out there like, once or twice a week, usually at night, because it's so hot during the day. After getting a workout in at the gym, I meet up with a couple of homies. Just go out on the field, just kick the ball around, play soccer, flag football. Have some fun.

A: Well, after graduation I definitely want to take some time off. I want to travel. I'm definitely planning on going to Greece. I mean, it's kind of hard right now, but it’s definitely in the works. I'm planning a trip to Vegas with some friends and then going to Hawaii with a couple other friends. I have a few friends who go to school in Hawaii. So I'm gonna visit them and then go back home to the Bay for a couple of weeks. And then just overall, just enjoy myself, you know. I just want to embrace this accomplishment.

A: Probably the wealth gap. I mean, I know during these times some people receive stimulus checks. And then some people didn’t. But there were also some people who didn't need them but managed to get them. Just especially college kids, because I know it's hard. Sometimes just get some groceries or go buy things you need. So definitely help college kids out first. Yeah, just spread the money out evenly. Try to help everyone as best you can.

Editor's note: This story is part of a series of profiles of notable spring 2021 graduates.Latina sisterhood, leadership in Greek life and fantastic coursework at the Thunderbird School of Global Management was a powerful mix for Carolina Tovar, who graduated this spring with her master’s degree in global management from Arizona State University.Originally from Veracruz, Mexico, Tovar grew up ...

Latina sisterhood, leadership in Greek life and fantastic coursework at the Thunderbird School of Global Management was a powerful mix for Carolina Tovar, who graduated this spring with her master’s degree in global management from Arizona State University. 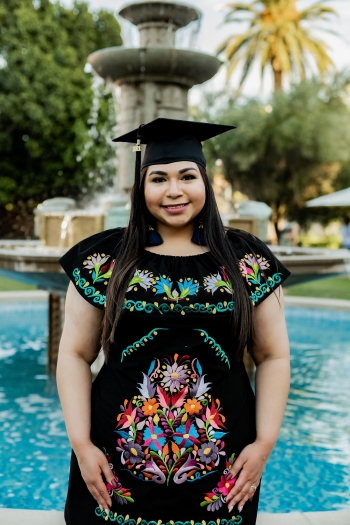 Originally from Veracruz, Mexico, Tovar grew up in a small town in Arkansas. In college, she majored in global digital transformations and digital audience strategy.

“I loved working with the GLVAs to plan and execute programs within the GLV. I learned that time is precious and goes by way too quickly to be stressed about things that are out of my control,” she said.

During her time at ASU, Tovar received two Thunderbird Alumni Scholarships. She says she’s looking forward to decorating her new home, starting a family and finally having some time to relax.

“One of my proudest moments was the feeling right after I presented my final deliverable to my client, Smuckers, in my Global Challenge Lab course. I’m looking forward to binging lots of Netflix without feeling guilty!”

Tovar spoke with ASU News about her time at ASU, what she learned, what advice she’d give to current students and what the future looks like for her.

Answer: I don’t believe there was an “aha” moment, but the moment I knew I was in the right place was during Foundations (program) when Professor Javidan gave his speech on having a global mindset.

A: I learned so many things, especially because my cohort is so diverse. I learned about so many cultures and nationalities, and it’s taught me to be more open minded.

A: Because I heard about how great my college was and the extensive network that I would have access to.

A: Professor Leclerc filled his classes with personal anecdotes and funny stories that have really impacted me. What I learned in his class went beyond that of international negotiations.

A: Unless they’re signing your paycheck or grading your class, their opinion of you doesn’t matter.

A: My favorite spot was the Starbucks on the Downtown (Phoenix) campus. Many of my classmates and I would go there to study.

A: I am going to be moving to Phoenix and starting my first “big girl” job as a project manager for a pet treats company.

A: I don’t think $40 million would even make a dent in any problem, but if I had unlimited resources, I would want to tackle the first Sustainable Development Goal of ending poverty.