Graduate empowered to achieve and serve through adversity

When Nicole Haikalis was 17, she and her mom had their first fight. Nicole wanted to withdraw her application to the Air Force Academy and graduate high school a semester early so she could enlist in the Marine Corps. Her mom, Susana, wanted her to focus on her education. 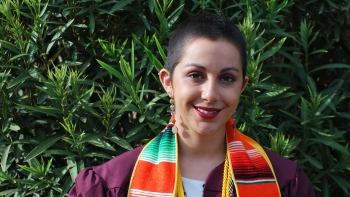 After an injury cut short Nicole Haikalis’ Marine Corps career, she began an impactful new journey at Arizona State University. Through a double major in biomedical engineering and neuroscience, she is prepared to help others gain independence and bodily autonomy. She has also been motivated to advocate for her peers and leave ASU a better place than she found it. Photo courtesy of Nicole Haikalis Download Full Image

After several months, Susana gave her daughter permission to enlist, but asked Nicole in exchange to choose one college to defer admittance and any scholarship awards, just in case.

Since then, misfortune, luck and resilience have taken Nicole on a difficult journey she didn’t expect, but through experiences she wouldn’t change.

Breaking down to build up

But this dream was cut short when she was injured in combat training. The Marine Corps’ culture of “pain being weakness leaving the body” inspired her to push past the pain for almost a year until she could no longer walk on her own and was forced into “limited duty.”

“My body started tearing itself apart,” said Haikalis, who eventually developed fibromyalgia and a connective tissue disorder among many other disabilities resulting from her injury.

She stuck it out in the Marines as long as she could, working diligently as a ground radio repairman for 1st Maintenance Battalion at Camp Pendleton in California. Unfortunately, within six months her injury progressed to the point that she was sent to Wounded Warrior Battalion West at Camp Pendleton.

Living with a new disability was a challenge that changed the course of her life. Since she had been physically active before her injury, Haikalis found solace in adaptive sports, setting battalion records and winning the 2016 Warrior Games for adapted upper-body swimming and hand cycling.

As fate would have it, Haikalis had applied to Arizona State University before enlisting. When she was accepted, she was offered a Hispanic National Merit Scholar award that she had deferred until after her military service.

“(My disability) changed everything, but I have learned that life is adaptable, and it helped me to gain perspective from a different group at ASU that I wouldn’t have known about before," she said.

So, in 2016, after only a two-year military career, Haikalis was medically retired, enabling her to begin her studies through ASU Online while she was still in San Diego.

“As soon as I started classes, I knew this was exactly what I wanted to do,” she said.

After that first semester, she moved to Arizona to start coursework on campus and set herself on a new path.

Haikalis says she has always had an engineering-oriented mind. As a kid, she wanted to study aerospace engineering and become an astronaut. However, when Haikalis applied to ASU in 2014, her desire to serve inspired her to apply for nursing. By 2016, life experiences had led her elsewhere.

“After my injury, the thing I struggled with most was not having control over certain parts of my body. I learned about biomedical engineering because of all the devices that disabled people rely on, and became aware of a whole new world of pains and struggles filled with incredibly strong people fighting for life,” Haikalis said. “It’s engineering, but it is also related to health care. It’s a role in medicine, but from a different perspective. I thought it was perfect.”

Through her experiences with disability, adapted sports and her biomedical engineering studies, Haikalis also discovered brain-computer interfaces. She fell in love with the potential for that field to help people regain their independence and bodily autonomy, a cause she had become particularly passionate about.

After three years studying in the Ira A. Fulton Schools of Engineering at ASU, these interests led her to pursue a double major in neuroscience through The College of Liberal Arts and Sciences.

Haikalis started conducting research after her first semester on campus at ASU. She had spent the entire term reaching out to professors to get started in research.

“I was all about it. I love research. I find it so fascinating that it can do such incredible work for the world,” she said.

She conducted neuroengineering research with Associate Professor Stephen Helms Tillery for more than three years, and recently joined the lab of Assistant Professor Sydney Schaefer, who focuses in part on neurorehabilitation research.

Haikalis was also involved in multiple organizations at ASU, from the Biomedical Engineering Society and Out in STEM to the Society of Hispanic Professional Engineers and Society of Women Engineers, as well as the Women Veterans Club.

All of these positive experiences at ASU have not been without their challenges.

“Being disabled is different. I always did well in school, but never in my entire life had I been a disabled student,” Haikalis said.

She has also dealt with post-traumatic stress disorder and military sexual trauma, slow-to-nonexistent Veterans Affairs medical care, divorce and other difficulties, in addition to her physical disabilities.

“I’ve had ‘life’ during all of this, just like any student does,” she said. “But it’s up to me to make life happen for a reason. Plus, I have a different perspective that I can share with the world and advocate for people who can’t.”

This motivation has driven Haikalis to leave ASU a better place than she found it.

She would talk to her professors when she saw situations unintentionally making things more difficult for students. Then she would help to make the changes that would empower her and many other students who might also be struggling.

Haikalis formed a tight group of friends with other biomedical engineering majors, especially those who also have disabilities or are at risk of discrimination. There were many times when Haikalis felt she wouldn’t be able to make it to graduation, but luckily she was able to look to her “incredibly impressive” friends, like Sarah Davis and Analisa Benites for motivation.

“I wouldn’t have made it without their support and strength,” she said.

Together the trio of students who sought to advocate for equality at ASU saw a need for additional biomedical engineering tutoring and mentorship for their peers. So, they started their own student organization, the Biomedical Engineering Peer-Tutoring Community.

Haikalis has also helped other ASU students as an adviser for the Sun Devil Support Network, which advocates for students who have encountered sexual violence and assault.

“Joining that organization has been one of my greatest accomplishments,” she said. 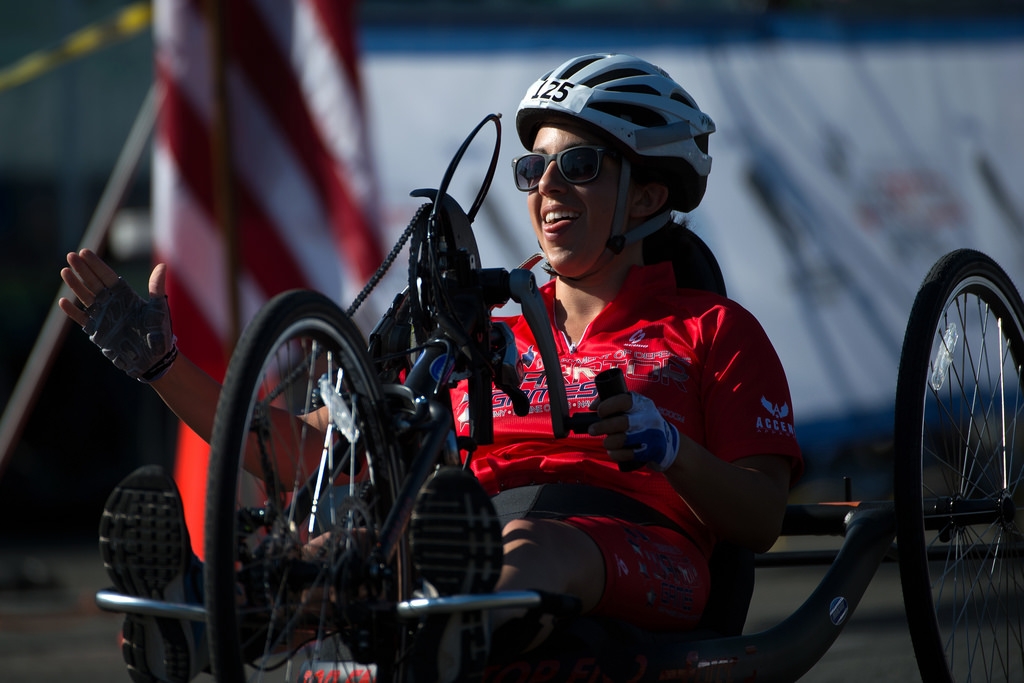 Nicole Haikalis competes in a hand cycling event for the Warrior Games adaptive sports competition, for which she set battalion records. She won the 2016 Warrior Games for adapted upper-body swimming and hand cycling. 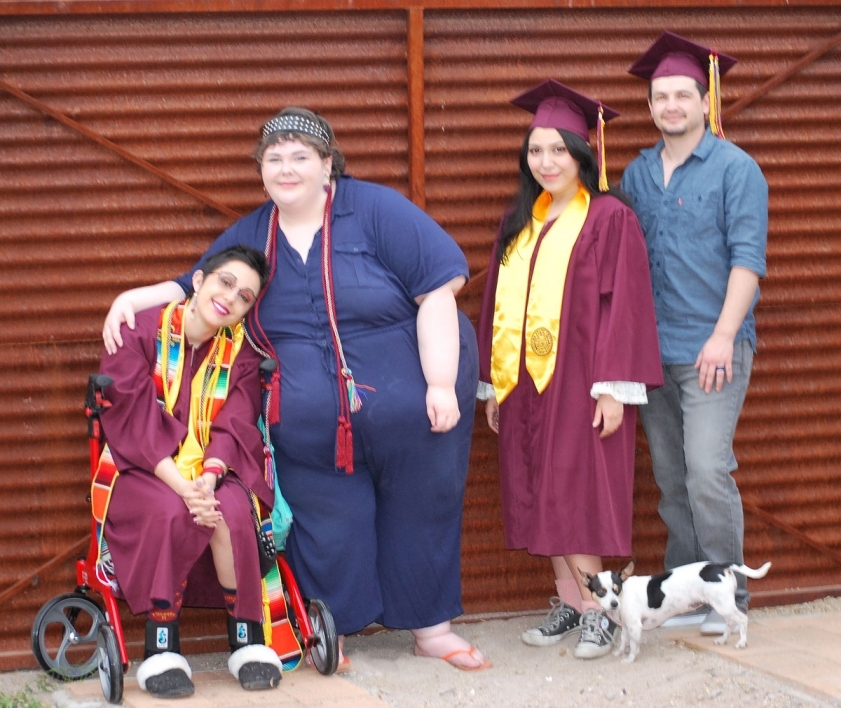 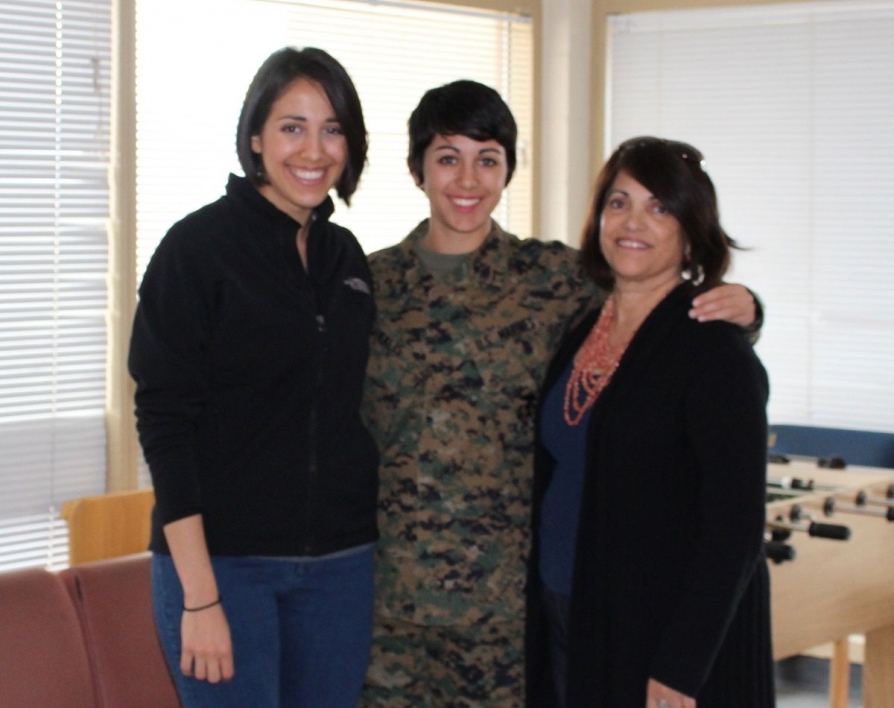 Nicole Haikalis’ sister, Michelle (left), and mom, Susana (right), were among her biggest supporters and sources of inspiration through her academic journey. 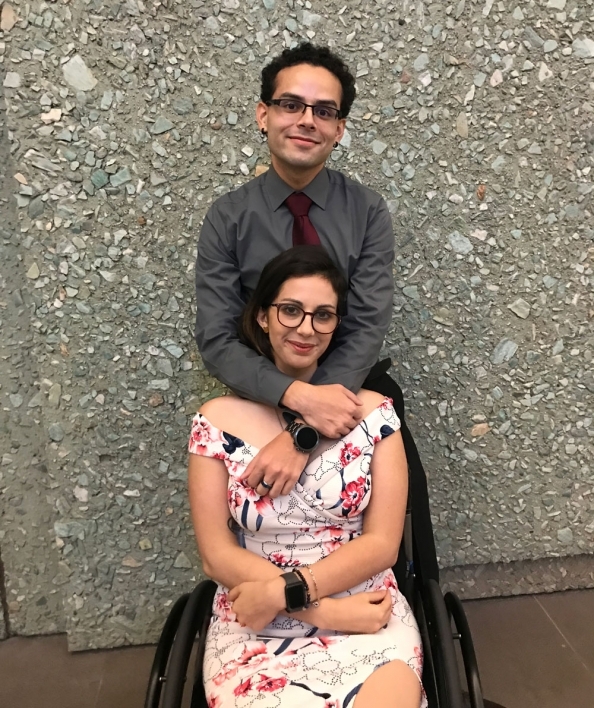 Nicole Haikalis credits her supportive partner, Julian Caceres, a secondary education (political science) student at ASU, for helping her heal psychologically during the past few years.

More broadly, Haikalis has worked with the nonprofit organization #Fight4HER to support health empowerment and rights. She learned grassroots campaigning skills so she could help overturn legislation that prevented bodily autonomy for people all around the world.

Haikalis says she could not have accomplished all that she has without the support of her loved ones.

From her “incredibly loving and caring” partner, Julian Caceres, who helped her heal psychologically, to her family, including her 99-year-old grandma and many loving aunts, uncles, cousins and friends, to advocates and mentors at ASU, she has valued a robust support network behind her.

Haikalis’s mom, Susana, is her “biggest hero.” She defended her daughters from an abusive father and persevered to teach them the importance of respect and love.

“She had a very hard life, and she has worked harder than anyone I know,” Haikalis said.

Susana was one semester away from completing her own degree in chemical engineering when she lost her funding, so her daughters’ education is very important to her.

Haikalis’ elder sister, Michelle, has also been a source of inspiration. As a psychologist working in research and academia, Michele studies the bystander effect and the role of alcohol in sexual assault. She was the first in the family to complete college and earn a doctoral degree. Haikalis says Michelle has given her “big shoes to fill.”

“My sister is incredible! I look up to her as my role model,” said Haikalis, who also completed a minor in psychology. “She went through a lot in life and was the first person in my family to break through many boundaries to accomplish a lot of things.”

At ASU, Assistant Director of Academic Services Jessica Meeker has been a dedicated and caring biomedical engineering adviser and ally who was “interested in learning the perceptions of others and adapting to be more accepting of all," Haikalis said.

And in Assistant Professor Schaefer, Haikalis has found an impactful mentor who encourages her to work toward obtaining advanced degrees and pursuing an impactful career.

After graduating this spring with two bachelor’s degrees, Haikalis will continue her studies at ASU to earn her master’s degree as part of the Fulton Schools 4+1 accelerated degree program.

She then plans to pursue a doctoral degree and work in research and academia. In particular, Haikalis wants to serve in the field of sensorimotor research and brain-computer interfaces, which enable prosthetics or other devices to be connected to the brain and generate sensation and restored abilities. She’s fascinated by the possibility for people to use these interfaces and devices to completely relearn abilities and regain independence.

“I hope to make a difference and improve lives everywhere I go, especially through the use of my research. I hope to work with brain-computer interfaces, giving freedom back to quadriplegics, paraplegics, and people who have locked-in syndrome,” Haikalis said. “I truly believe in equality for all and never intend to stop advocating and fighting for those in need.”

Water polo is back in action on Saturday against #1 seed USC at 2:00 PM MST after defeating Cal in round one of the MPSF Championship Tournament. ... Water polo is back in action on Saturday against #1 seed USC at 2:00 PM MST after defeating Cal in round one of the MPSF Championship Tournament.