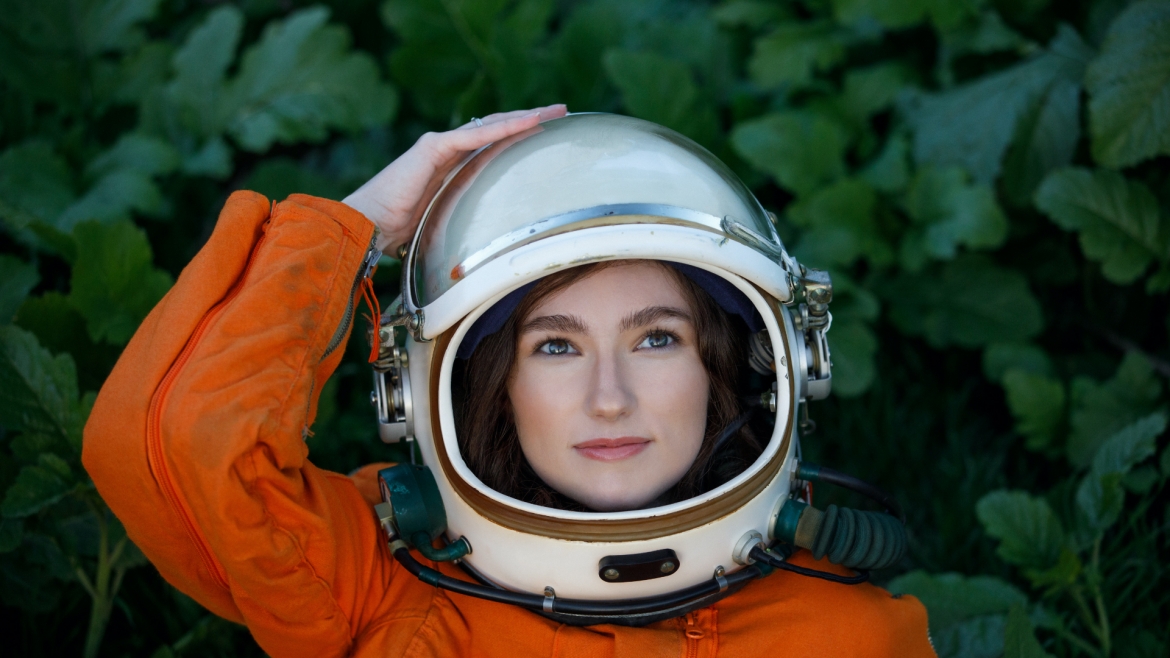 Venture Devil Emily Karlzen, ’20 BS in business entrepreneurship, describes herself as a “huge space nerd.” Her company, Arch Rift, aims to make commercial space tourism more comfortable — beginning with an automatically deploying oxygen helmet, which won $15,000 in the eSeed Challenge at Demo Day 2019 when Karlzen was still a student.

The product is an adaptation of the current space helmet model used by astronauts, which is constrictive, hot and heavy, Karlzen says.

“You can’t scratch your nose because your visor’s down, and it’s just generally a bad system,” Karlzen said. “We are trying to make spaceflight more comfortable and more accessible.”

Arch Rift’s space tourist helmet is designed to be stored in a pressure spacesuit until an emergency when it automatically deploys, popping over the user’s head and supplying pressurized oxygen.

The concept is attractive to people in the space industry. Just before ASU’s Demo Day, when she was a senior, Karlzen’s helmet beat several competitors to win first place at the NewSpace Business Plan Competition, a contest in Texas for space ventures. Like the Demo Day competition, it’s a “Shark Tank”-style contest, but specifically for commercial space startups. That win helped her and her team — which includes PhD student Joseph Hunter  — gain traction leading up to Demo Day. 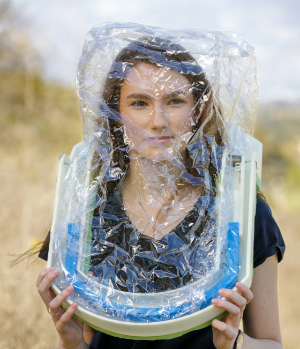 Last spring, just before the COVID-19 pandemic triggered a wave of state shutdowns across the U.S., Karlzen’s team attended another pitch competition at a space conference in Washington, D.C., called Satellite 2020. Although the conference was smaller and shorter than originally anticipated, Karlzen says the benefits of attending were indisputable. Her team walked away with valuable feedback on their product, along with a new team member, an aerospace engineer.

Today, the team members work their full-time jobs, dedicating nights and weekends to working on the business. While the pandemic has required them to take a more distant coworking approach, Karlzen says they’re still checking items off their list and finalizing design plans based on technical feedback. The final goal: Federal Aviation Administration safety approval so they can sell the helmet and get it into space.

Karlzen says talking to industry experts is the best move students and early entrepreneurs can make.

“It’s really scary ... but it’s so helpful, especially since you’re a student, more people are going to be more likely to respond to you,” she says. “If you just go out and talk to people, it’s not that bad.”

Ricky Johnson, ’17 BS in computer systems engineering, has been an inventor for as long as he can remember. His mom never lets him forget how in high school, he disassembled her favorite electric can opener to build a robotic fan that followed him and his welding co-workers around as they worked in a sweltering workshop.

“It kind of all started with that one little experiment,” Johnson said, “to create a solution for the problems that I was having at work at the time.”

That innovative, solutions-based mindset led Johnson to invent the Barrage Striking Sleeve, a pressure-sensitive punching bag sleeve that lights up in different sequences to create an interactive workout. Johnson, who holds a black belt in karate, says he got the idea while practicing karate alone. When his instructor wasn’t present, Johnson struggled to think of combinations quickly enough.

“I wanted to create something that will kind of give me a virtual coach, while my actual coach wasn’t there,” Johnson said. “(The sleeve) forces you to react to the lights.”

The iOS application Johnson created allows users to adjust their workout difficulty by controlling the sleeve’s sensitivity and other parameters. It’s a technology Johnson has adapted for other sports, like baseball. He designed a light-up panel that attaches to a springy baseball reflex net used for independent practice. When different zones of the panel light up, a pitcher throws the ball at the zones, making for an interactive practice session.

“You can see if you’re being as accurate with your throws as you think you are,” Johnson said.

Johnson was able to bring his creative ideas to life with the help of $3,000 in seed funding from the Global Sport Venture Challenge at ASU’s Demo Day in December 2019. A large sports company is in discussions to license his interactive sports technology. Meanwhile, Johnson will keep inventing.

One of the programs is Venture Devils, born out of a desire to cast a “wider net of support” for students, faculty members, alumni and community members, according to Tracy Lea, associate director, venture development at the J. Orin Edson Entrepreneurship + Innovation Institute. The program provides aspiring entrepreneurs with funding, networking and mentorship — the latter of which is most critical, says Lea.

“(Our mentors) truly have hearts of teachers, as well as deep experience in the entrepreneurial space,” Lea said.

The unique, versatile program provides opportunities to access a wealth of supportive resources for projects and ideas at all stages of development.

“Engage in those resources, and know that there’s a thriving entrepreneurial community here in ASU that is waiting for you,” Lea said.

Taking it to market

Cole Brauer, ’20 MS in systems engineering, is now in his second semester of pursuing a PhD in the same field at ASU. Together with his two teammates, sophomores Jude Brauer, Cole’s younger brother, and Seth Altobelli, Brauer developed a compact, lightweight electric motor for mountain bicycles — the first product from their company, Accelerated Cycles.

Brauer’s electric motor for mountain bikes won $2,000 in the Global Sport Venture Challenge on Demo Day 2019. The seed funding helped the team finish their prototype, test it with potential customers and work toward manufacturing it.

“We’ve always worked together on different projects, mainly in competitive robotics,” Brauer said of his brother. “Because (Jude’s) more software, and I’m more electrical and mechanical … our skills complement each other.”

The Accelerated Cycles makes electric motors to provide a boost for bikes. “If you have an idea for a venture, get involved, get started on it. ASU has a lot of great resources to tap into,” said co-founder Cole Brauer.

In addition to the motor, Brauer says his team is working to perfect the accompanying small battery and bike chain sensors, which detect how much energy a rider is using and activate the motor when necessary.

“The whole system’s built to work in short boosts, rather than continuously running like an e-bike would,” Brauer explained.

More than just components of the overall motor system, the battery and sensors can also be sold as stand-alone products, Brauer said. He hopes to begin selling those parts this upcoming year.

His advice for other students and alumni: “If you have an idea for a venture, get involved, get started on it. Don’t be intimidated by it,” Brauer said. “ASU has a lot of great resources to tap into. Don’t be afraid to get started.”

Bringing a product to market is a goal for many entrepreneurs, including Nathaniel Fink, ’19 BS in material engineering, whose sustainable athletic clothing brand FutureForm won $2,000 in the Global Sport Venture Challenge in December 2019.

It’s not Fink’s first foray into the world of Venture Devils: Previously, he won $10,000 for a lightweight, user-friendly ballistic armor vest he invented for law enforcement and civilian use alike. While designed for different purposes, both products are wearables, intended to enhance comfort.

“We use technical fabrics to bridge the gap between sustainability, performance and style,” Fink said of FutureForm, which he founded along with fellow ASU alumni Jacob Figueroa, and William Houghton and Daniel Najafali.

The raw fabric itself is made internationally — meaning that once the pandemic hit, the FutureForm team faced drastically longer shipping times, slowing progress. Yet Fink says the experience also gave the FutureForm team a welcome chance to research new possibilities.

“The pandemic taught us how to be quite agile and pivot quite quickly in a situation like this,” Fink said.

The team’s next goal is to add women’s wear to the FutureForm lineup.

“Women, men, all different athletic backgrounds and shapes and sizes,” Fink said of the audience his company aims to serve. “We’re trying to fit the bill for everything.”

Jacob Figueroa and Nathaniel Fink, founders of sustainable athletic wear brand FutureForm. “Everyone who’s working on their dreams ... keep at it,  and don’t listen to anybody who tells you ‘no,'" said Fink.

Fink’s passion for working on his product is contagious — an impressive drive to improve the world that’s shared among ASU’s Venture Devils, according to Jeff Kunowski, ’11 BS in integrative studies. Kunowski, the Global Sport Institute’s associate director of innovation programs, began his entrepreneurship journey at ASU, designing a prototype for a rechargeable, portable outdoor sign, which he later took to the Phoenix Suns.

The coronavirus pandemic meant last year’s trip to the adidas headquarters — the prize for top venture awardees, made possible by the company’s partnership with ASU — became a virtual conference instead. Still, the sessions were fruitful for participants, Kunowski said, including for Johnson and Brauer, two of the top winners selected to attend the conference.

“We created individualized sessions where they could pitch their idea, and have more of an open conversation with subject matter experts from the adidas side,” Kunowski said.

For the top ventures from last year, it was their ambition and flexibility that carried them to see their winning projects through, amid a global pandemic.

“One moment can change your life,” Fink said. “Everyone who’s working on their dreams ... keep at it, and don’t listen to anybody who tells you ‘no.’”

Get support for your idea: Venture Devils is open to students, staff, faculty and community members. Connect to the network of Sun Devil entrepreneurs and tap into resources.

Sun Devil water polo will face #4 seed California Golden Bears in round one of the MPSF Conference Championship Tournament. ... Sun Devil water polo will face #4 seed California Golden Bears in round one of the MPSF Conference Championship Tournament.