For most people, graduating college caps off several years of hard work and perhaps some sleep deprivation. 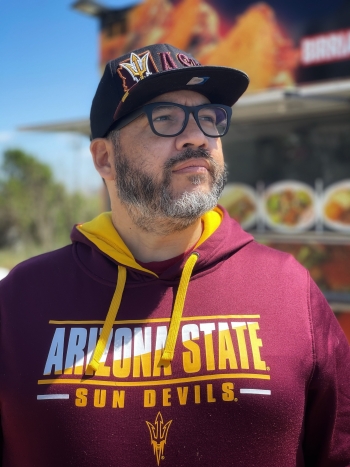 For Arizona State University student David Lew, graduation is all that and more. Since 2014, Lew has been battling stage 4 medullary thyroid cancer and undergoing chemotherapy treatments.

A working comedian, Lew’s motto is “If you don’t laugh, you don’t heal.” That mantra may have saved his life. With his cancer currently in remission, this proud dad and husband now works to help others reduce their stress and anxiety, having founded #BeThePOP — “Be the Purveyor of Positivity.”

Lew, who lives in Fairfield, California, in the Bay Area, is earning a Bachelor of Arts in film and media studies via ASU Online this spring. Completing the degree signals that he has overcome much. It also means that he is one step closer to being the man — and the dad — he wants to be.

We spoke to Lew about what it was like to take on the challenge of returning to college during such a difficult time.

Question: What was your “aha” moment when you realized you wanted to study in your field?

Answer: For as long as I can remember, I have loved and consumed all forms of media. In high school, I thought I would go to film school and be a film director, but life had other plans. I gave up on my college education for over a decade. Then in 2014, I was diagnosed with stage 4 medullary thyroid cancer. In that same year, I married and then we found out we were having a baby. I decided it was important to me that my daughter see her dad graduate college, especially since my wife was working on her journey through nursing school. My wife and I researched schools, and I fell in love with ASU.

A: I started my college journey at Solano Community College in September 2001. I was 18 years old. Here I am 20 years later, and I’m graduating from Arizona State University. I point that out because I learned that “it’s not always easy, but it’s always worth it!” I also learned that group projects are even more difficult online!

A: Their approach to higher education piqued my interest. They seemed to be constantly innovating their approach to online higher education. The reason I stayed at ASU was because of their constant support; huge shoutout to [English’s Associate Director of Academic Services] Linda Sullivan for dealing with my constant emails and advisement appointments! Besides the work I put in, without Linda, I would not be graduating.

Not to mention ASU has the best school colors out of any college! I found a school that matched my yellow glasses!

A: I would have to give a shoutout to [Instructional Designer] Andrew Salcido. Professor Salcido taught me the importance of a professor paying attention to a student who desperately wants to succeed, while also recognizing that the student needs a little assistance and some guidance. I took his class when I was feeling my worst. I was down to 135 pounds and I had zero energy for day-to-day tasks, let alone a college course. During the course he checked in on me and answered my questions almost immediately. Years later, he and I are still in constant contact and I consider him a friend. I had hoped the graduation ceremony would be in-person because Professor Salcido told me he’d be there to watch me graduate.

A: “Do what others won’t to have what others don’t.” It’s all about the follow-through. I had someone along the way tell me, “Regardless of where you are in your educational journey, you can do it.” It’s all about the work you put in and the sacrifices you are willing to make. As a stand-up comedian, traveling and performing, I have had to take my laptop and books to shows! I would do my discussions and exams between shows or after shows. You would also definitely find me in the airport, MacBook plugged into an outlet, working on my discussion responses.

A: Give me a good pair of noise-cancellation headphones and anywhere can be my study spot! I’ve studied in bars with my AirPods Pro in both ears. It helps to have a favorite Spotify playlist (Lo-Fi study beats is my go-to) so you can tune out the world.

A: Too many to list! After attending ASU’s Film Spark workshop in December, I am collaborating with other ASU students to write and produce a short film. I’m also getting back to performing stand-up with my first club dates booked since the beginning of the pandemic. I’m excited to get back out there and perform in front of a crowd. I’m also in talks to work with Blueprint Medicines (manufacturers of the chemotherapy that has helped me in my cancer journey) to begin making public appearances on their behalf to share my success story with their treatment.

A: Picking one is difficult, but homelessness is a huge concern to me, as well as financial burdens that weigh down everyday citizens. I would use the $40 million to fund universal basic income pilot programs. UBI is a government program in which every adult citizen receives a set amount of money on a regular basis. The goal of a basic income system is to alleviate poverty. Studies have shown with a $500 stipend each month, individuals paid bills, bought groceries, purchased kids' clothing. It’s a “trickle-up economy,” helping the very citizens that make our country so great.

Former presidential candidate Andrew Yang first championed this cause during his run for president, but it has been around for decades. Dr. Martin Luther King Jr. was championing a guaranteed income program when he was assassinated.

Editor's note: This story is part of a series of profiles of notable spring 2021 graduates.Andrew Bremner has worked with many talented students over his 30-plus years as a professor of mathematics at ASU. One day last spring while waiting for his intermediate abstract algebra class to start, he posed to those present a problem of the “self-referential” number in base 10 — namely to find a...

Andrew Bremner has worked with many talented students over his 30-plus years as a professor of mathematics at ASU. One day last spring while waiting for his intermediate abstract algebra class to start, he posed to those present a problem of the “self-referential” number in base 10 — namely to find a unique 10-digit number whose first digit indicates how many times 0 appears in the number, the second digit indicates how often 1 appears, down to the 10th digit giving the total appearances of the number 9. 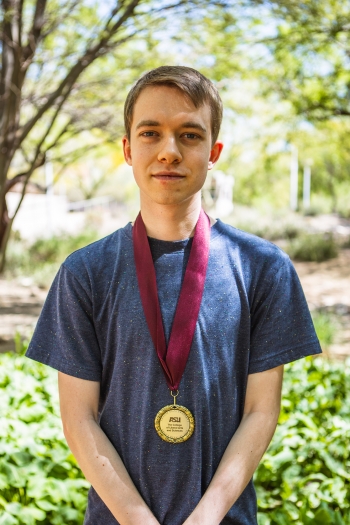 Benjamin Jones is the spring 2021 Dean's Medalist for the School of Mathematical and Statistical Sciences. Download Full Image

Two days later, a student presented his analysis of the problem for a general base, classifying all such “self-referential” integers. That student was Benjamin Jones, the spring 2021 Dean’s Medalist for the School of Mathematical and Statistical Sciences.

Over the next couple of weeks, Jones wrote up his findings in rigorous mode for submission to an undergraduate mathematics journal, but sadly, they discovered in a detailed literature search that the results had already been published, albeit in a relatively obscure location.

In the meantime, Jones asked Bremner to serve as the director of his Barrett, The Honors College thesis. Over the summer, Bremner had him read through the undergraduate Silverman and Tate book on elliptic curves, and posed him the number theory problem of finding integer points on elliptic curves. The current knowledge was curves with 140–150 integer points. Jones was able to find examples with 272 points.

“Not only did Ben break the record — he smashed it,” said Bremner. “As far as I know, he is the current world record holder.”

Jones posted his thesis on the math arXiv, where it has received quite a bit of interest. Colleagues with whom Bremner shared the thesis were impressed.

“He showed initiative and enthusiasm. It was a pleasure to work with him,” said Bremner.

Jones graduates this spring with a Bachelor of Science degree in mathematics and a certificate in cryptology. He has an outstanding cumulative GPA of 4.02, achieved with many challenging graduate level courses.

He had two internships in data engineering with Tile, Inc., a company that makes low-power Bluetooth tracking devices, and an IT security internship with AAA Insurance. In 2019, his team was awarded Best in Show during the ASA DataFest competition.

In his free time, Jones enjoys writing software, such as fractal renderers, compilers and lots of calculator games, which he posts to his github account and his personal website. He recently made a proof assistant, a programming language that verifies proofs and comes with a model of the Zermelo-Fraenkel set theory axioms and appropriate proofs to show that definitions are well defined.

After graduation, Jones plans to continue his studies toward a PhD in mathematics. We asked him to share about his journey as a Sun Devil.

Answer: I have a lot of family in Phoenix, and I wouldn’t have been able to afford going out of state. With a larger school comes more people and more diversity, too! I like the various advantages of this, and especially the fact that ASU has so many student organizations.

A: There were two “aha” moments. The first one was when I was in fifth grade. I was enjoying learning how to program computers, and somehow everything I was learning was teaching me how to think like a mathematician as well.

The second “aha” moment was when I was taking (MAT 300) Mathematical Structures with Dr. Childress during my freshman year. The name of the class seemed vague enough that I had no expectations for what I would learn. Everything surprised me and gave me a new perspective on what mathematics actually is. This class embodied the parts of mathematics that before I didn’t realize were the parts I liked!

Q: What do you like most about mathematics (and your area of concentration)?

A: I like that mathematics is the only subject that requires one to be so rigorous yet so creative at the same time.

Q: What is something you learned while at ASU — in the classroom or otherwise — that surprised you, that changed your perspective?

A: Sometimes it seems like people think experts are born experts, but nobody is. It’s clear to me that my professors have worked very hard to become who they are. And even they occasionally must re-derive a result they forgot, so nobody should be intimidated by not understanding something.

A: Make sure you enjoy how you spend your time!

A: I like to skate around campus, and there is an especially nice garden by the Biodesign buildings.

A: MATHEMATICS IS CREATIVE!