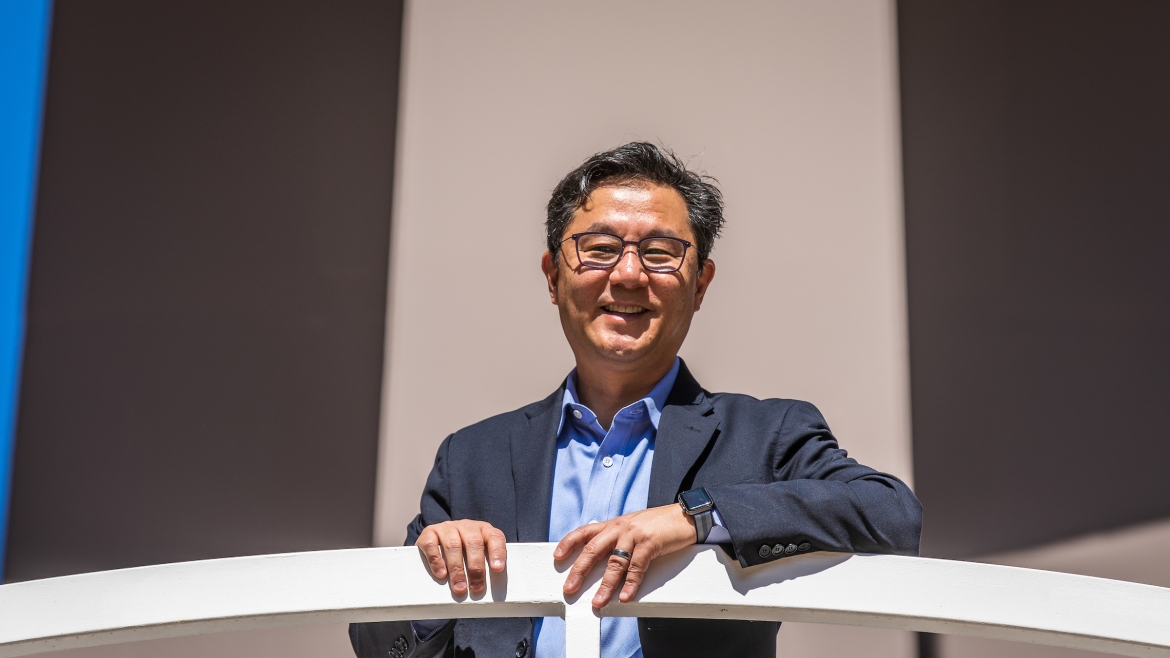 Kenro Kusumi will step up to his new position this summer

A first-generation immigrant, Kenro Kusumi came to the United States when he was 2 years old. He grew up in a small town named Kinston in coastal North Carolina, and it was there that his dedication to scientific curiosity took root.

He worked with the local natural history museum from middle school into high school, volunteering. That led to field research and scientific meetings.

“That really got me down this path of science, which I have been enjoying the entire time,” Kusumi said. “You look around the world, it's just beautiful. Just the things animals can do are amazing. Why do some tortoises live until they’re 200 years old? I've been working on trying to solve the challenge of disease. What goes wrong where you get scoliosis? What happens when the spine is malformed? More importantly, what can we do to either fix it, or at least identify the people at greatest risk for having diseases like scoliosis?”

Kusumi’s curiosity led him to become a genome biologist. He has sequenced the genome of desert tortoises, and his group has worked on how anole lizards regenerate their tails. Currently director of the School of Life Sciences at Arizona State University, this summer Kusumi will become the new dean of natural sciences for The College of Liberal Arts and Sciences.

ASU News talked to him about his research, what he hopes to accomplish in his new position and what The College can offer a new generation of students.

Question: You’ve got some pretty wide ranging interests. How do they all come together?

Answer: It's all basically data, right? Each cell contains data and that data makes us who we are. So it's basically like biological data science. It doesn't matter. You can apply the same approach to absolutely almost any part of biology. What about the coronavirus sequence makes it more deadly or more transmissible? And it really comes down to the data that's encoded in those genetic constructions and then the complicated sort of way that it interacts with the world.

Q: What are your goals as dean of natural sciences?

A: This is a time of unique opportunity, but certainly major challenges. Nothing has brought it as home as that we really have to learn from this pandemic. And then never be caught unaware. I mean, we've had coronavirus disease outbreaks about every decade. This current one is COVID-19. There was a disease called MERS about 10 years ago and SARS, the original big outbreak. And we were lucky those two times. … We need to be prepared all the way from our social structures to our scientific apparatus for the challenge. … We know that we desperately need science and technology to really help us deal with the impacts of climate change. Our deserts are getting drier and hotter. We're in the midst of a very long drought here. This will impact our city as it will impact so many different things: our wildlife, our agriculture. I think ASU is ideally suited in the natural sciences to be this champion, to innovate strategically in the research area.

Q: What can students expect from the natural sciences?

A: We are at this kind of incredibly exciting time for digital educational technologies and their impact on both our on-campus immersion students, but also our online students. All of the science and math units are in the middle of this transformation. And I think what will be exciting about the other side is that we'll be able to reach so many people both nationally and around the world. We'll be able to reach a much more diverse set of students. We're already seeing the ability to enable talented people to have an education that they just couldn't do the first time around because they had family or jobs. Not everyone can go to school when they're 18 or 19 years old. This is a chance to tap into the talent pool that is out here in the country. … The natural sciences is ideally positioned to be the academic home to reach out and continue to allow people to learn.

Q: What do students need now?

A: The things I learned in the '80s, in the 2020s it's just a whole different world. It's hard to learn everything you need to right now for the 2050s and the 2060s. And our first-year students? I mean, that's the world they're preparing for. So how do we stay nimble? How do we thrive during change? How do we quickly adapt to the new educational challenges? That's us, ASU; we can do it.

A: I'm a first-generation Asian American and I'm also a member of the LGBTQ community. … When I was growing up and when I was in college, there were just not many examples of university leaders who were part of any of those communities. We have this benefit from this incredibly diverse undergraduate and graduate student population. That's the future of our country in terms of tapping into and benefiting from the experiences that people bring representing culturally diverse different walks of life. … STEM education has not historically done a great job of reaching out. It's really important that we create inclusive communities of belonging. … We want to be the place that allows every student to succeed.

Editor's note: This story is part of a series of profiles of notable spring 2021 graduates.Christian Kainoa Spenser is set to graduate from Arizona State University on May 3. When he receives his diploma, it will be the end of a four-year journey with nearly insurmountable obstacles in his way.“My education journey has been defined by adapting to different and hard situations,” he said.In Ma...

Christian Kainoa Spenser is set to graduate from Arizona State University on May 3. When he receives his diploma, it will be the end of a four-year journey with nearly insurmountable obstacles in his way. 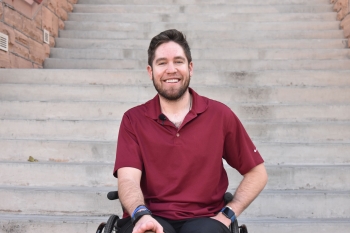 At the end of Christian Kainoa Spenser's sophomore year at Seton Hall University, he began feeling ill. After returning home, he was put in a medically induced coma for three weeks and awoke to find necrotizing fasciitis had claimed his legs and soon parts of his hands. He began the process of healing — a journey that would take him to an internship in the governor’s office and a degree in civic and economic thought and leadership from ASU. Photo by Joe Martin/ASU Download Full Image

“My education journey has been defined by adapting to different and hard situations,” he said.

In May 2017, Spenser was finishing his sophomore year at Seton Hall University in New Jersey when he started to feel ill. He passed out during a final but was able to get home to Scottsdale, Arizona. He was quickly taken to a nearby hospital where he was in a medically induced coma for over three weeks.

“The last thing I really remember was being in the intake room doing the vitals with my grandma and looking down at her hand,” said Spenser.

When he woke up, the doctors told him that he didn’t have his legs anymore and that they needed to amputate his hands. Spenser was diagnosed with a rare disorder called necrotizing fasciitis, commonly referred to as “flesh-eating bacteria.” After three months Spenser was released from the hospital.

“Ever since then, it’s been a continual journey of healing and growing in lots of different ways,” said Spenser.

The summer before Spenser got sick, he’d applied for an internship with Arizona Gov. Doug Ducey. When Ducey heard of his story, he visited Spenser in the hospital with an acceptance letter to the internship.

When Spenser was ready and dedicated to restarting his education, he worked as an intern in the governor’s office. Whether it was meeting with Rep. Jennifer Longdon to talk about planning a more accessible city for people with disabilities or helping legislative policy advisers, he had the opportunity to experience firsthand what it takes to run a state government.

When Ducey learned that Spenser wanted to continue to pursue his education, he recommended the School of Civic and Economic Thought and Leadership (SCETL), which at the time was new to ASU. Intrigued by civil governance, innovation, philosophy and learning what it takes to be an entrepreneur, Spenser thought the new academic program was a natural fit.

“It fell right along my alley of wanting to be able to help people, give back to the community and learn how we can do that at an institutional level,” said Spenser, who is graduating with a major in civic and economic thought and leadership.

“Education has always been this thing for me — no matter where you come from, no matter who you are, no matter the ability people say you have, it’s something all people can have to really move up and grow,” said Spenser.

The governor created a video address for SCETL's Class of 2021 in which he gave a special shoutout to Spenser: “Kainoa has faced considerable challenges to get here, but he has persevered every step of the way. I’m proud of Kainoa and our other SCETL graduates.”

Spenser works with the K2 Adventures Foundation, which raises money for people living with limb loss and limb difference. Before the pandemic, he frequently traveled around the state sharing his story and the lessons he has learned. Those experiences, combined with his education, have made Spenser passionate about using his education to help others.

“Academia and education have always played a big role in my life … it’s not getting the degree but going through the process of graduating and what you learn through that is the best part,” he said.

After graduation, Spenser plans to continue to speak about his story and start a nonprofit organization to aid those living with seen and unseen disabilities. He is also interested in pursuing graduate studies and traveling to Japan to climb Mt. Kilimanjaro.

Answer: First, I would do tangible things, like making Tempe and Scottsdale accessible. … So that whether you are a student, a worker, or someone who wants to get out and exercise around town can do so with dignity and ease.

A: It was looking at the website and seeing the pursuit of discussion-oriented courses that drew me in. Hearing lectures from professors is incredible, but getting the student-on-student discussion is really what drives people to learn and really taking on the lessons that the authors have to teach us.

A: I’ve gotten this lesson a lot in my life — you’re always a student and can never know what someone is going to say … you can find knowledge anywhere. I came from a smaller campus so when I found myself sitting in the middle of a ginormous campus and random people come up to you and have great conversations, you think “Wow, this is the cool experience of a bigger university.” It was the little lessons that the university taught me through the people.

A: Dr. Peter McNamara was one of my first professors. I really liked his teaching style, the books we read and the discussions we had in his course.