Christian Kainoa Spenser is set to graduate from Arizona State University on May 3. When he receives his diploma, it will be the end of a four-year journey with nearly insurmountable obstacles in his way. At the end of Christian Kainoa Spenser's sophomore year at Seton Hall University, he began feeling ill. After returning home, he was put in a medically induced coma for three weeks and awoke to find necrotizing fasciitis had claimed his legs and soon parts of his hands. He began the process of healing — a journey that would take him to an internship in the governor’s office and a degree in civic and economic thought and leadership from ASU. Photo by Joe Martin/ASU Download Full Image

“My education journey has been defined by adapting to different and hard situations,” he said.

In May 2017, Spenser was finishing his sophomore year at Seton Hall University in New Jersey when he started to feel ill. He passed out during a final but was able to get home to Scottsdale, Arizona. He was quickly taken to a nearby hospital where he was in a medically induced coma for over three weeks.

“The last thing I really remember was being in the intake room doing the vitals with my grandma and looking down at her hand,” said Spenser.

When he woke up, the doctors told him that he didn’t have his legs anymore and that they needed to amputate his hands. Spenser was diagnosed with a rare disorder called necrotizing fasciitis, commonly referred to as “flesh-eating bacteria.” After three months Spenser was released from the hospital.

“Ever since then, it’s been a continual journey of healing and growing in lots of different ways,” said Spenser.

The summer before Spenser got sick, he’d applied for an internship with Arizona Gov. Doug Ducey. When Ducey heard of his story, he visited Spenser in the hospital with an acceptance letter to the internship.

When Spenser was ready and dedicated to restarting his education, he worked as an intern in the governor’s office. Whether it was meeting with Rep. Jennifer Longdon to talk about planning a more accessible city for people with disabilities or helping legislative policy advisers, he had the opportunity to experience firsthand what it takes to run a state government.

When Ducey learned that Spenser wanted to continue to pursue his education, he recommended the School of Civic and Economic Thought and Leadership (SCETL), which at the time was new to ASU. Intrigued by civil governance, innovation, philosophy and learning what it takes to be an entrepreneur, Spenser thought the new academic program was a natural fit.

“It fell right along my alley of wanting to be able to help people, give back to the community and learn how we can do that at an institutional level,” said Spenser, who is graduating with a major in civic and economic thought and leadership.

“Education has always been this thing for me — no matter where you come from, no matter who you are, no matter the ability people say you have, it’s something all people can have to really move up and grow,” said Spenser.

The governor created a video address for SCETL's Class of 2021 in which he gave a special shoutout to Spenser: “Kainoa has faced considerable challenges to get here, but he has persevered every step of the way. I’m proud of Kainoa and our other SCETL graduates.”

Spenser works with the K2 Adventures Foundation, which raises money for people living with limb loss and limb difference. Before the pandemic, he frequently traveled around the state sharing his story and the lessons he has learned. Those experiences, combined with his education, have made Spenser passionate about using his education to help others.

“Academia and education have always played a big role in my life … it’s not getting the degree but going through the process of graduating and what you learn through that is the best part,” he said.

After graduation, Spenser plans to continue to speak about his story and start a nonprofit organization to aid those living with seen and unseen disabilities. He is also interested in pursuing graduate studies and traveling to Japan to climb Mt. Kilimanjaro.

Answer: First, I would do tangible things, like making Tempe and Scottsdale accessible. … So that whether you are a student, a worker, or someone who wants to get out and exercise around town can do so with dignity and ease.

A: It was looking at the website and seeing the pursuit of discussion-oriented courses that drew me in. Hearing lectures from professors is incredible, but getting the student-on-student discussion is really what drives people to learn and really taking on the lessons that the authors have to teach us.

A: I’ve gotten this lesson a lot in my life — you’re always a student and can never know what someone is going to say … you can find knowledge anywhere. I came from a smaller campus so when I found myself sitting in the middle of a ginormous campus and random people come up to you and have great conversations, you think “Wow, this is the cool experience of a bigger university.” It was the little lessons that the university taught me through the people.

A: Dr. Peter McNamara was one of my first professors. I really liked his teaching style, the books we read and the discussions we had in his course.

Changing the way the nation generates and consumes energy is at the heart of the recent Arizona State University School of Molecular Sciences’ 2021 Innovation Award.The winner, graduate student Nghi Nguyen, aims to convert sunlight, water and air into fuels with her proposal.“Congratulations to Nghi Nguyen on this well-deserved award,” said President’s Professor Ian Gould, interim directo...

Changing the way the nation generates and consumes energy is at the heart of the recent Arizona State University School of Molecular Sciences’ 2021 Innovation Award.

The winner, graduate student Nghi Nguyen, aims to convert sunlight, water and air into fuels with her proposal. 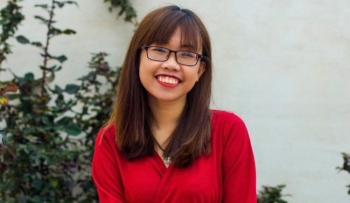 “Congratulations to Nghi Nguyen on this well-deserved award,” said President’s Professor Ian Gould, interim director of the School of Molecular Sciences. “(The school) continues to be extremely grateful to Emeritus Professor William Glaunsinger and Lorna Glaunsinger for their continued support of this award, which provides our students with a unique opportunity and represents a concrete demonstration of support of the principle 'advancing research and discovery of public value' as given in the ASU Charter.”

The Innovation Award is supported through the ASU Foundation.

"Nghi’s use-inspired research combines efforts across traditional disciplines, including synthetic molecular chemistry, green chemistry, materials science and engineering. She is among the most innovative and motivated students I have had the pleasure of mentoring," said Nguyen's research adviser, Associate Professor Gary F. Moore from the School of Molecular Sciences and the Biodesign Institute Center for Applied Structural Discovery.

Nguyen describes her research proposal as utilizing materials that convert carbon dioxide to fuels and other value-added chemical products using the power of the sun.

As part of this proposal she aims to initially develop synthetic methods to covalently graft carbon-dioxide-reduction-reaction catalysts onto visible-light-absorbing semiconductors. Secondly, Nguyen will structurally characterize the resulting hybrid assemblies, and finally conduct experiments to better understand the structure-function relationships governing their performance.

Innovations in these areas will enable new technologies for meeting increasing global fuel and material demands while using the principles of green chemistry to minimize environmental impacts.

“Professor Moore has continuously supported my studies, providing mentorship, guidance and encouragement to pursue my research interests, ideas and imagination,” Nguyen said. “His passion for molecular sciences and work ethic inspire me. I am also thankful for the mentorship and advice of Brian L. Wadsworth, a former graduate student in our research group.”

The award is given annually to a graduate student for excellence in achieving the School of Molecular Sciences' mission of discovering molecular-level solutions to real-world challenges through the pursuit of methodology or development of research ideas or inventions.

The award gives the recipient a grant and access to expert entrepreneurial assistance to develop the research idea or invention, along with a commemorative plaque. Nguyen is eligible to receive additional grant funds to advance her invention after a Skysong Innovations evaluation.