Vishaal Singh will graduate this May with a PhD in Geological Sciences from ASU’s School of Earth and Space Exploration. Singh received his undergraduate degree from the Department of Geology and Geophysics at the Indian Institute of Technology in Kharagpur, India. 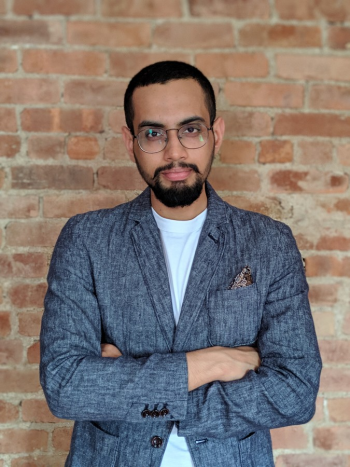 In 2016, when Singh spent a year investigating the surface of the moon for his master’s thesis, he started looking at PhD programs with a focus on planetary science and exploration. Recognizing the School of Earth and Space Exploration’s interdisciplinary program as one of the highest ranked in the country, with involvement in space missions like the Lunar Reconnaissance Orbiter and the Mars rover Curiosity, Singh applied to the ASU graduate program with a goal of working on instrument development for future missions.

Early on, Singh enrolled in an Exploration Systems Engineering graduate course with Professors Mark Robinson and Paul Scowen. Apart from the lectures, the course included field visits to NASA’s Jet Propulsion Laboratory and Orbital ATK, which provided insight into how satellites and instruments for commercial and scientific purposes are built. During the semesterlong project, the class designed a planetary mission to the moon, which was invaluable in learning about the mission life cycle, from formulation to closeout.

“It helped contextualize the development of missions like Psyche and Europa Clipper, and personally motivated me to develop instrumentation for enabling future exploration — a major goal of my dissertation,” said Singh.

Discussions with his adviser, Professor Alyssa Rhoden, shaped Singh’s interest in ocean worlds like Europa and motivated his research. It was, however, lessons outside the classroom that shaped his outlook on life.

“In my second year as a PhD student at ASU, my adviser left to take on a position at another research institute,” Singh said. “During that period of uncertainty, I was pleasantly surprised by the support from the community of graduate students and the selflessness of my professors. My adviser continued to serve as a mentor to me despite no obligation to do so, while Professor Steve Desch stepped up to take on the role of adviser. I ended up with a network of researchers (and friends) who have encouraged me at every step of this journey – it is an ideal I intend to follow in my own interactions with other researchers.”

Desch quickly discovered Singh’s incredible work ethic, his diverse range of interests, his excellence at self-direction and his innate talent.

“Vishaal is the embodiment of the SESE spirit,” Desch said. “Tackling a problem from multiple angles: studying Europa ice from the standpoint of spectroscopy and laboratory experiments, to spacecraft data, even to lab testing of communication tethers for future exploration by landers! It's been a pleasure and a reward to work with Vishaal, and I look forward to many future collaborations with him.”

Singh shared more about his experiences at the School of Earth and Space Exploration.

Questions: What was your “aha” moment when you realized you wanted to study the field you majored in?

Answer: There was no single “aha” moment, but rather a series of experiences that set me on this path. Nearly two decades ago, my first notion of space exploration revolved around saving the Earth from an asteroid impact, courtesy of Bruce Willis and the film "Armageddon." With time, I came to realize that this work did not mean saving the world on a daily basis, but it remained a source of fascination. It wasn’t until my sophomore year in undergrad that it finally clicked. I was given the choice of spending three months either on a beach in Goa, or in a small room mapping craters on the moon, and I chose the latter. Those three months led me to select planetary science not just for my major, but for my research career.

A: With the pandemic, it’s been hard to find the motivation to get out of bed, much less spend days staring at pixelated faces on endless Zoom calls, or getting any writing done. It is hard to feel like you are making any progress, and I spent months where I got very little done. As I got closer to finishing, one of the things which helped was setting weekly goals, and meeting virtually with advisers and peers to hold myself accountable. It was OK if I did not get everything done but having a timeline that established when this project would end was invaluable for me.

A: I had an unusual dissertation journey in that I spent more time away from ASU, working for the past three years in research labs across the country. While on the Tempe campus, I have fond memories of meeting up with friends at ISTB4 Crater Carpet, the Hayden Lawn, and of group lunches at Thai Basil. Outside of it, after exhausting weeks on lab running — or failing to run — experiments, I spent many weekends biking on the Glendora Ridge Road and the foothills of Mt. Baldy in Pasadena (California) to clear my head.

A: I was lucky enough to get involved in NASA-funded projects with several researchers at the Jet Propulsion Laboratory and Columbia University – we are independently (1) developing techniques for understanding the surface of icy worlds and how they evolve over time, and (2) building instruments for communicating through the ice and exploring the oceans of Europa, to search for life. As a postdoctoral researcher in planetary science, I intend to continue this work, and eventually achieve my goal of becoming an instrument scientist on missions to the outer solar system.

A: After five years of graduate school with a singular focus on space exploration, my views towards tackling the problems on Earth are colored by my understanding of the trickle-down effects of exploration and their socioeconomic benefit to society. From advances in space-related industries to spurring innovation in technology/life-saving capabilities and creating employment, space exploration with NASA at the forefront has transformed our lives. The driving force behind this transformation has been the people working on these projects. 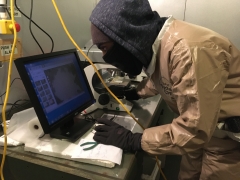 Vishaal Singh in the lab.

For less than 0.00001% of the federal budget, we can continue to tackle some of the greatest challenges in science and technology by creating a new science-literate and globally inclusive workforce. With a diversity of experiences, perspectives and scientific expertise, we can increase national interest in science and continue to inspire people across the world. I would pursue this goal by training the next generation of scientists and engineers.

Editor's note: This story is part of a series of profiles of notable spring 2021 graduates.Cindy Rogel Bahena remembers when a professor asked if there were any students in class who knew about a medical service for people in lower socioeconomic circumstances. “I was the only one in the room who raised my hand to talk about it,” says Rogel Bahena, who is graduating this May with a bachelor'...

Cindy Rogel Bahena remembers when a professor asked if there were any students in class who knew about a medical service for people in lower socioeconomic circumstances. 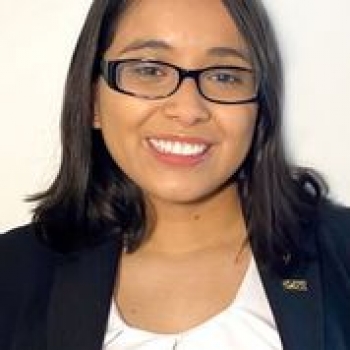 “I was the only one in the room who raised my hand to talk about it,” says Rogel Bahena, who is graduating this May with a bachelor's degree in materials science and engineering. “After that day, I knew my life experience, knowledge and opinions brought different perspectives to engineering, and I needed to learn how to develop my knowledge to impact the technologies of tomorrow.”

Rogel Bahena also knew achieving that impact would require becoming not only a good engineer but a strong leader. The long list of endeavors she engaged in beyond her coursework attests to her commitment to the goal.

As a student in Arizona State University’s Barrett, the Honors College, she was also enrolled in the Grand Challenges Scholars Program in the Ira A. Fulton Schools of Engineering.

She was a member of the ASU chapter of the Society of Hispanic Professional Engineers, or SHPE de ASU, serving terms as its president and vice president, and as outreach director for its junior chapters.

Among the most rewarding activities, she recalls hosting Noche de Ciencias (Science Night), which led to her participation in conducting 12 workshops for more than 200 young students from underrepresented communities and establishing five high school SHPE chapters through which students are encouraged to pursue higher education.

Rogel Bahena plans to pursue an engineering position in industry, but also has her sights set on returning to school to earn a master’s or doctoral degree in materials science and engineering.

She is looking forward to a career that will enable her “to change the world into a better place,” she says, and to be a role model for those who follow in her footsteps.

“I want to share my experience with the next generation, so that it inspires them to meet the challenges of finding engineering solutions.”

Read about other exceptional graduates of the Fulton Schools’ spring 2021 class here.