At the small scale at which molecules exist, everything is in motion. Jittering molecules move in every direction by random collisions amongst themselves driven by an effect, studied by Einstein, among others, called Brownian motion.

These motions include changes in distances between molecules but also stretching and contractions of individual molecules. When it comes to large biological molecules, these internal changes in shapes of molecules are referred to as conformational motion. 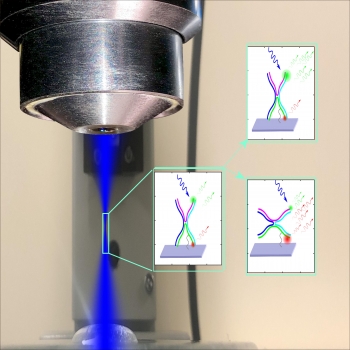 Conformational motion is critical as it affects how biomolecules interact and describing it provides key insights into understanding biological processes within living systems.

Conformational motion in large biomolecules is often probed by a tool called fluorescence resonance energy transfer (FRET). FRET can be used as a kind of molecular ruler to measure how the distance between two parts of a molecule changes as it undergoes conformational change. Using this technique, a biomolecule is engineered such that it emits green light when two points of interest in the molecule are far apart, and emits red light when two points approach each other as a result of a change in conformation.

When this experiment is performed at the single molecule level, light changes are observed in bursts from individual molecules revealing timescales over which the molecule is changing shape. Measuring rapid changes, as they happen in real time, is difficult with current detectors as these would need to capture images faster than the typical time over which conformational motion occurs. As current detectors can be slower, light bursts appear as mixtures of red and green light, hiding molecular complexity, much like the blurring of a picture of a car speeding on the highway would appear when taken on a cellphone camera. Yet the blur contains useful information!

“So far we have limited ourselves to looking at slow events at the molecular scale," said Pressé, who holds appointments with the Department of Physics, the Center for Biological Physics and the School of Molecular Sciences. "Not because they are interesting to biology but because of how our detectors work. Now, our findings broaden the types of processes we can investigate and expand our ability to peer into increasingly faster events relevant to life.”

“This technique opens up a new window for studying fundamental processes,” said Patricia Rankin, chair and professor of the Department of Physics. “It will give ASU researchers a chance to probe the mechanisms of life and gain new, valuable insights.”

"Molecular biology in cells is characterized by many complexities that can't be captured by traditional molecular measurement methods with limited resolutions, so we need new methods to have any hope of properly describing biochemistry in living cells," said Ian Gould, interim director of the School of Molecular Sciences. "The techniques and methodologies being developed in the Pressé lab are expanding the range of useful molecular measurements to the point that they can potentially open up entirely new areas of molecular-level research in cellular systems."

Arizona State University was named a Best Value College for 2021 by The Princeton Review. ASU is among 200 school profiles featured and selected out of more than 650 institutions that were considered for the ranking.The Princeton Review considered more than 40 data points to tally the return on investment ratings of the colleges to determine its school selection. Topics included academics, cost, f...

Arizona State University was named a Best Value College for 2021 by The Princeton Review. ASU is among 200 school profiles featured and selected out of more than 650 institutions that were considered for the ranking. 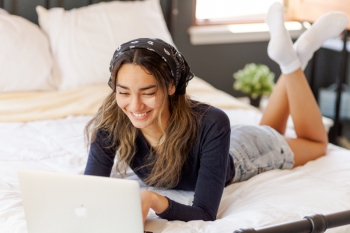 It notes that the schools chosen are the most exceptional in the nation at delivering great academics, affordable cost and great career foundations.

ASU has been at the forefront of providing affordable and accessible quality education, welcoming its largest student community to date when, nationally, college enrollment was declining.

Historically, the university has maintained a model that ensures students have limited financial barriers to attend the university and have access to the maximum amount of financial aid available. And despite recent challenges, the university is committed to providing a quality academic experience, available to all students regardless of their geographical location, to ensure they remain on track to graduation.

Beyond graduation, 89% of undergraduate students start their own business or receive at least one job offer within six months of graduation.

The Princeton Review is also widely known for its college rankings in dozens of other categories which the university is also a part of such as Best 386 Colleges and Best Business School lists.