The White House recently unveiled its $2.3 trillion package to overhaul the country’s infrastructure, calling it The American Jobs Plan. Investments for providing clean water, affordable housing, improved transportation and modernized schools are included in the plan.

One notable line item in the package refers to increasing broadband access to the tune of $100 billion. Calling broadband “the new electricity,” the plan echoes the claims that internet access should now be treated as a standard utility. 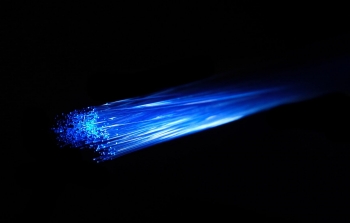 Investments in widespread communications infrastructure like this aren’t anything new in American history. The United States Postal Service’s creation of uniform urban postal rates in 1845 tripled the volume of letters within 10 years, increasing literacy rates. An even closer connection came nearly a century later with the Rural Electrification Act of 1936, when electricity was largely unavailable in rural areas. Just over 20 years later, nearly 90% of farm homes had power.

The closing of the gaps in both literacy and electricity brought more equitable opportunities to poorer and marginalized communities. Back in February 2021, Larry Irving — national policy leader and digital equity advocate — joined the University Technology Office’s monthly town hall, where he shared stories about his decadeslong fight to address the digital divide in the U.S. In the 1990s, he saw firsthand the stark need for equal access to the internet. But today, more than 30 million Americans lack access to high speed internet in a world that increasingly demands that access for remote work, education and more.

In a recent interview, ASU’s Chief Information Officer Lev Gonick, who has worked on policy for broadband, shared his aspirations for bringing universal broadband access to communities everywhere: “If not now, when? If not us, who? This is our time and our calling.”

The UTO Newsroom sat down with Gonick on the heels of The American Jobs Plan announcement to delve beyond politics and discuss how such significant broadband investment can change the face of our country and world.

Question: The language “future proofing” is used in the plan. What got us to the point where broadband internet has been cited as a public utility?

Answer: Think of "future proofing" as more like code words. Decoded, the call for "future proofing" is a call to move the technology and policy discussion to new levels and address the next generation of digital infrastructure. Next generation digital infrastructure is a move away from legacy copper and twisted pair networks to robust fiber networks and advanced wireless networks that leverage those fiber networks.

Q: To most, $100 billion is nearly impossible to conceive. Based on your decades of experience working with communities to close the digital equity gap, do you have any ideas or aspirations for how the funding can be spent?

A: The truth is that federal agencies responsible for $100 billion don’t necessarily have a lot of incentive to work together. When that happens, unfortunately, it ends up being less than $100 billion in value because of the way it’s allocated and certainly not optimized. That said, the total investable capital for broadband is of historic proportion.

The commitment to broadband has proven to be a critical, if not indispensable, part of access to education. What we’ve experienced this past year is the majority of America waking up to realize that there are a lot of communities who cannot actually participate not only in education, but also health care, workforce training and more.

The work that I’m particularly focused on are huge opportunities for inner city communities, refugee families, rural America and tribal communities. Two-thirds of rural Arizona do not have broadband. Effectively, these groups have been made to be invisible. In the broadband debate, bringing these folks online and then working to make sure that they adopt the technology and are able to use it for education is among the highest priorities.

Check out a recent conversation with ASU leaders about digital equity, specifically in rural and tribal communities, hosted by ASU ShapingEDU.

Q: If we’re looking at 2031, and $100 billion has been spent on broadband infrastructure, what will be the measure of success?

A: In the context of education and ASU, one of the measures will be having more students from diverse socioeconomic backgrounds because we will have democratized the access layers in their communities.

The others will be things that are actually related to education attainment. We should be able to make sure that we are providing digital health care literacy to people as part of our education mission, and in working with our partners, providing better health care outcomes delivered through technology. Economic mobility for a person that is literate in technology is a huge measure of success as well.

Q: “Build high-speed broadband infrastructure to reach 100% coverage” is listed as one of three steps to increase broadband access. Furthermore, the step aims to “prioritize support for broadband networks owned, operated by or affiliated with local governments, nonprofits and cooperatives.” How is this step already being realized at ASU and beyond?

A: Going forward, you will hear how important “community anchor institutions” are. To actually build broadband across the country, the role of schools, universities, health care partners, libraries, museums and government buildings will be important as these institutions are not going anywhere.

Here at ASU, along with the University of Arizona and Northern Arizona University, we are working with the Sun Corridor Network (SCN), a consortium that works with municipalities, counties and other educational institutions to provide improved telecommunications, research and education opportunities through high-speed internet. Today, SCN is actually actively involved in supporting a number of initiatives that are providing what is called the Arizona Middle Mile project.

The Arizona Middle Mile project makes it possible for communities along a freeway, for example, to connect to next-generation digital infrastructure. For example, even if rural cities have state-of-the-art fiber optic broadband, but no way to connect to the internet, the result is having extremely fast speeds in an intranet, with limited connections to those within the city’s network. So think of the middle mile as a backbone that uses next generation digital infrastructure to connect these rural cities to the internet.

Q: Any final points you would like to make about this big moment in history for broadband access?

A: Taking it all the way to the first question, I think digital equity is actually a subtext for something even more basic: It represents efforts to really focus on equity for people living in poverty. Digital equity is part of that single most important thing to work on, and with it, hopefully we’ll be able to aid and advance their needs.

Sarah Amira de la Garza has been selected to receive the 2021 Gary S. Krahenbuhl Difference Maker Award by The College of Liberal Arts and Sciences at Arizona State University.The annual award was established through generous contributions of faculty, staff and friends of ASU, to honor a faculty member who personifies the spirit of difference-making as demonstrated by Krahenbuhl, a former dean of...

Sarah Amira de la Garza has been selected to receive the 2021 Gary S. Krahenbuhl Difference Maker Award by The College of Liberal Arts and Sciences at Arizona State University.

The annual award was established through generous contributions of faculty, staff and friends of ASU, to honor a faculty member who personifies the spirit of difference-making as demonstrated by Krahenbuhl, a former dean of The College. 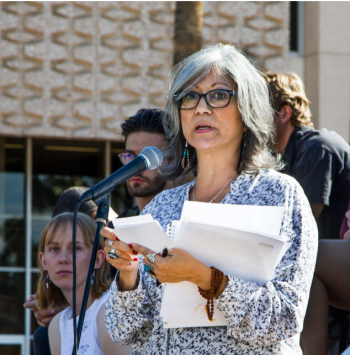 "Professor de la Garza has made a difference from the time she arrived at Arizona State University as one of ASU’s first Southwest borderlands faculty," said Karen Leong, associate professor at ASU's School of Social Transformation. "Through her mentoring and program-building, Amira has proven to be an exceptional leader who consistently advocates for the success of graduate students and faculty of color at ASU. She has created spaces for women of color and underscored the significance of their research across The College and the university.

"For example, as a founding member of the Faculty Women of Color Caucus, Amira worked steadfastly behind the scenes to organize the caucus, effectively communicate its goals, and render it a visible presence across the university, while also mentoring faculty women of color to be effective leaders. She forges innovative collaborations, including when, as founding director of the North American Center for Transborder Studies from 2004–2007, she articulated a transdisciplinary vision that brought businesses, policymakers, and most importantly, communities, together across North America’s borders. Her transformative scholarship is evident as well in her development of the Four Seasons of Ethnography, a methodology that she has taught to students across the university and the world."

Known for her impact on methodology, de la Garza has reported her research and guides others to translate research findings through the use of creative writing, poetry, fiction and staged performances, to reach audiences beyond the academically trained. A longstanding creative writer, she is currently working on a novel and several collections of poetry, as well as continuing theoretical work on the concept of “mindful heresy,” and pedagogical work teaching about diversity, prejudice and intercultural conflict through the use of an original role-playing game modeled on Dungeons & Dragons and created collaboratively with her undergraduate students.

“For me, the biggest change I could ever make would be to have people say that because of their experience working with me, whether as students, colleagues or collaborators in community-based projects, they saw that it is possible to be both radically critical towards an inclusive anti-racist future, and caring, rigorously intellectual, and to do so with good humor and a sense of community belongingness,” de la Garza said. “This is the ecological way of the future, and the change I hope I 'make' is in the awareness that the future is alive in our lives now, if we can embody it in the way we work, towards the goals that call for courageous commitment.”


De la Garza is also a member of the graduate faculty at the Hugh Downs School.

"Dr. De la Garza is truly deserving of this award,” said Corey Reutlinger, Hugh Downs School doctoral candidate and graduate teaching associate. “She encourages her students, like me, to transform their works for the greater good of academic and local communities. Amira invites me to step out of my comfort zone and dare to be different. It is because of her guidance and embodiment of the spirit of difference-making that I feel I can accept who I am and what I have to offer to the world."

In the community, she was awarded the Victoria Foundation’s 2020 Eugene Garcia Award for Outstanding Latina/o Faculty for her impact on the lives of Latino students in the Phoenix and Arizona area.