ASU computer science graduate learns to invest in himself

While at ASU, computer science major John Gebara discovered his true potential. After reflecting on all that he has balanced throughout college — his coursework, jobs, extracurricular activities and relationships with friends and family — he realized that he is capable of more than he thought. 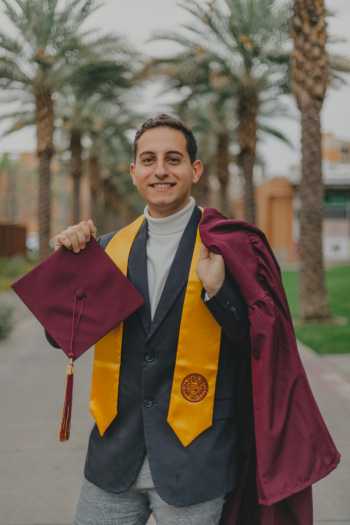 “It is a lot for one person, and to reflect on how much you have put on your plate and how far you have come will genuinely surprise you and make you realize you are so much more capable than you know,” he said.

He offers this advice to current and future students: “Take every chance to invest in yourself and your knowledge and it will be returned twofold.”

Gebara, who grew up in Gilbert, Arizona, graduates this May with a degree in computer science with a concentration in software engineering from the Ira A. Fulton Schools of Engineering.

In high school, Gebara determined he wanted to gain knowledge in computer science and software engineering while he was working on applications for Lowell Observatory in his STEM class.

“Having the opportunity to watch these apps grow out of nothing made me realize that I wanted to be able to create and make something that people can use and learn from,” he said.

Gebara recently worked on a Product Acceptance Review Tool Generator at his current job with Iridium Satellite Communications. He was able to work alongside senior engineers who helped mentor and guide him through the process of programming.

Outside of his engineering coursework, Gebara participated in many extracurricular activities during his time at ASU. As a Medallion Scholar, he was able to develop leadership skills and volunteer with others in the Medallion program. Gebara received the ASU Alumni Association Medallion Scholarship all four years, as well as the New American University Scholarship.

Some of his favorite memories from the program were times where he was able to bond with his cohort, such as going to restaurants after meetings and volunteer events.

“We really bonded and moved from being just fellow scholars to friends,” he said.

Gebara also was involved throughout his time as a Sun Devil in Camp Kesem, a national nonprofit devoted to supporting children who have been impacted by a parent having cancer. His junior year, he joined Dabke United, a student organization that strives to preserve Middle Eastern culture through dabke, a traditional dance.

Gebara shared his not-so-secret thoughts on his favorite spot on the Tempe campus.

“My favorite spot on campus is the Secret Garden,” he said. “It is such a beautiful and serene place and as much as I loved going there to study or relax, I made it a point to not go as often as I would like because I wanted to preserve the magic of the Secret Garden and keep it special and leave it empty for the next amazing person that just needs a small getaway from the crazy campus life.”

As a Lebanese American, Gebara’s Middle Eastern background has always been important to him. He struggled finding others in his life who shared his heritage and learned an important lesson in an Arabic course at ASU.

“We are all connected, not as Middle Eastern Americans, but as humans, and we should all treat each other with the utmost respect, compassion and empathy,” he said. “This is a common lesson we are all taught as children, and yet in our modern society it is scarce, so (my Arabic professor) taught us to be the change we want to see in the world by turning a simple Arabic lesson into a team-bond lesson.”

Gebara will pursue his passions after graduation this May as he begins his career as a full-time software engineer at Iridium Satellite Communications.

Editor's note: This story is part of a series of profiles of notable spring 2021 graduates.When she first started as a Sun Devil, Medallion Scholar Sara Donaldson knew that she wanted to pursue a degree in science. While she was searching for ways to get involved on campus, she found the Central Arizona Chapter of the Society for Conservation Biology (CACSCB) and found her passion truly was in p...

When she first started as a Sun Devil, Medallion Scholar Sara Donaldson knew that she wanted to pursue a degree in science. While she was searching for ways to get involved on campus, she found the Central Arizona Chapter of the Society for Conservation Biology (CACSCB) and found her passion truly was in protecting wildlife and the environment. Donaldson’s experience with the club resulted in her changing her major to conservation biology and ecology in The College of Liberal Arts and Sciences so she could prepare for a career in conservation. During her first ecology course at ASU, Donaldson learned about relationships between organisms and how they interact with their environment.

“Learning about all the diverse species and plant life changed the way I saw a typical landscape,” she said. “I began to see how living things connect to each other and how they contribute to the value of biodiversity.”

During an environmental ethics course taught by Ben Minteer, she realized that not everybody thinks about the environment the same way she does.

“Dr. Minteer helped me understand that all people have different motives and backgrounds that contribute to their own personal set of ethics," she said.

Donaldson realized that people are motivated to protect the environment for various reasons and described the course as one that challenged everything she had previously learned about ethics.

Donaldson, who received the ASU Alumni Association Medallion Scholarship all four years along with the New American University Scholarship, initially chose ASU for the biology program, but also because of her father’s Sun Devil legacy.

“He attended ASU and shared many fond memories of his education with me,” she said. The Chandler native wanted to stay close to her family during college while being able to make her own memories on the campus that her father was so proud of. She loved walking around the campus with him as he pointed out buildings he took classes in and study spots he enjoyed.

After exploring the campus for herself, Donaldson’s personal favorite spot became the balcony of the Student Pavilion. She enjoyed listening to the live music that would sometimes be playing outside the Memorial Union and eating sushi while studying with her friends.

“After class, I would go to the Memorial Union, get some food and then head over to the balcony,” she said. “Watching the day slowly turn to evening, all the colored lights surrounding the MU would illuminate the campus.”

Her advice for current students is to find a lifestyle and environment that works best for them. For her, that meant studying in a calming, outdoor spot on campus, but for others, that may mean working at home or in a coffee shop.

Donaldson, who also minored in dance with the Herberger Institute for Design and the Arts, understands that each person has a unique learning style and different interests, so it’s important to “find your own groove.”

“Surround yourself with subjects that interest you and classes that spark passion,” Donaldson said. “Be brave, take chances and participate in new things.”

After graduation, Donaldson plans on working toward her master's degree in plant biology in conservation from ASU. After finishing her degree, her dream is to work at the Desert Botanical Garden and learn about the diversity of plants there.