Jay Williams wants to use all the tools at his disposal to tell the stories popular media often ignores. “I’m researching how utilizing new technologies can bring audiences an opportunity to experience the voices of underrepresented communities and peoples traditionally excluded in popular media,” he said.

Williams, who is graduating this semester with a Master of Arts in digital culture, said his path toward filmmaking started as a teenager growing up in Georgia.

“I was part of a media literacy program when I was a teenager in Atlanta, and it changed my life,” he said. “In that class we looked at images of African Americans in film and media and dissected how those images could be made to be better representative of Black culture.”

He went on to study film at Georgia State University, and after graduating with his bachelor’s degree, delved into the world of independent filmmaking.

“Without access to large amounts of money to fund projects, I became fascinated with independent filmmaking as a way to make films without spending a lot of money and yet still making quality work,” he said.

Williams worked on larger productions in Atlanta while simultaneously working on his own independent films as a writer/director/editor. Independent filmmaking allowed him to tell the stories he wanted.

“As a Black filmmaker in America, there are a host of stories that I would love to be part of telling to help fill the perspective from Black culture,” he said. “The Black experience in film needs to be so much more than the slave narrative and the annual Hollywood slave movie. It's important not only for wider audiences to see that, it's essential for us to see ourselves as more than that. I want to do my part to present our stories to the world so that our voices are heard.”

Williams wanted to explore other creative mediums to express and represent what he valued most. And he found the perfect place to do that at the School of Arts, Media and Engineering in the digital culture program.

“I’ve been able to think about how audiences consume media and what the future of that may look like where we are consuming film not in a theater, but in new spaces, new environments and locations,” he said. “I think digital culture grounded me more in the technical headspace of how I want to tell stories and not just in the traditional four-walled theater space.”

During his time at ASU, he was able to combine his understanding and passion for film with the creative tool set the School of Arts, Media and Engineering provided.

“I have been heavily influenced by remix culture, which brings various elements, like separate images and sounds, to contrast and even disrupt the existing narrative,” he said. “This type of narrative disruption brings attention to relevant issues in the film. I did this in Dr. (Lauren) Hayes’ class with the 1915 film ‘Birth of a Nation,’ to bring to the audience’s attention to the parallels between the horrific images of today and a century ago. Also, by sampling parts of the film’s soundtrack, I was able to create a new audio aesthetic that contrasted with some of the film’s imagery. All together I see how this fuels a sort of creative reappropriation of scenes and makes us pay more deliberate attention to what we are seeing.”

For his applied project, Williams created an experience to shine a light on Black cowboys and explorers.

“My applied project, The Unknown West, is an extension of the research I’m interested in — it is a way to give respect to the little-known contributions of Black cowboys and explorers in the American West,” he said.

The project is an immersive experience where the participant can “reveal” the faces and images of these forgotten people by physically moving around the space.

“I'm always going to be a filmmaker and a creative, it's in my DNA,” he said. “Now it's a matter of using the new skill sets I’ve gained in digital culture mixed with my previous experience in film."

Answer: My undergraduate degree was a major in film and video at Georgia State University. My “aha” moment was in film history class and realizing the deeper connection people had with film. The conversations about film being like a snapshot of time and the society it was made in would fuel conversations for hours. I loved hearing about why those films were so impactful. I wanted to continue in those fascinating talks and learn more.

A: What surprised me about ASU was how easily I found my creative niche. I wasn’t expecting to be able to merge so many of my interests into one educational experience. I feel like I found a long-lost home within AME at ASU!

A: ASU had so many resources available to my needs. I thought about how I would fit in coming back into education after some time in the professional world, but the diversity and acceptance at the school was remarkable. It made the perfect fit.

A: I have several. Even as I think back I can’t pick just one. So a shout out to: Dr. Pavan Turaga, David Tinapple, Grisha Coleman, and my amazing chair, Dr. Lauren Hayes. Each professor gave me an opportunity to be myself and in their own way encouraged me to explore my interests further. Thank you!

A: My advice would be to enjoy this moment. It goes by fast. This might be the last time in your adult life that you can explore anything that interests you. I’ve looked at grad school as a sort of academic playground that I can explore and ask questions. I would also recommend meeting people and making as many new friends as you can.

A: As a grad student, Matthews Center is my home! Just studying and being around my AME fam has really inspired some great memories and ideas for future collaborations.

A: I would like to tackle food insecurity and the quality of food that we eat. I’d like to give people a chance to eat better and have better options available that are less expensive. I know that might take more money than $40 mil, but it would be a start for sure.

Graduating biochemistry senior credits researchers with his drive for success

Editor's note: This story is part of a series of profiles of notable spring 2021 graduates.Deciding on a college is an important decision that will impact a student’s career opportunities. Bryan Ugaz, who is graduating from the School of Molecular Sciences this semester, came to ASU because of the reputation of the researchers and the variety of interesting research taking place.“ASU has a w...

Graduating biochemistry senior credits researchers with his drive for success

Deciding on a college is an important decision that will impact a student’s career opportunities. Bryan Ugaz, who is graduating from the School of Molecular Sciences this semester, came to ASU because of the reputation of the researchers and the variety of interesting research taking place. 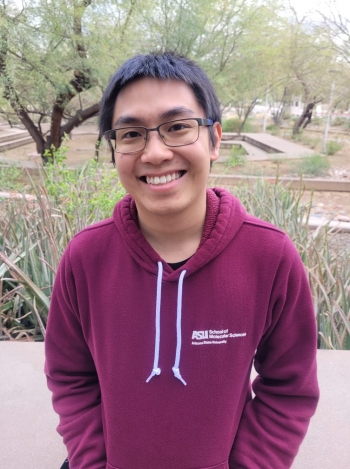 “ASU has a wide array of talented faculty, meaning there were a lot of opportunities to get into many different fields of research,” he said.

Ugaz made the most of those opportunities, working for associate professor Marcia Levitus to study how DNA flexibility affects DNA repair. He found this research to be both challenging and rewarding.

“These experiences, while often frustrating, have given me a heightened sense of respect for research and the amount of time and effort that goes into it,” he said.

Ugaz also credits Levitus as a mentor who not only fostered his scientific skills, but also pushed him to strive for higher goals.

“Because of Dr. Levitus’ support and encouragement, I earned an REU at Cornell University.” (REUs are Research Experience for Undergraduates sponsored by the National Science Foundation.)

“I constantly felt in awe at the complexity and multifaceted levels of control that exist on the cellular level,” he said.

Ugaz's efforts were recognized by the School of Molecular Sciences, which awarded him the 2020 Therald Moeller Scholarship. Additionally, Ugaz was part of the winning teams of the ASU Academic Bowl in both 2018 and 2019, which provided supplementary scholarship awards. He is also the recipient of the 2021 ACS Organic Chemistry Award.

After graduating, Ugaz will pursue a PhD in chemistry with an emphasis in chemical biology at Stanford University. As he begins his next steps, Ugaz offers advice for incoming students.

“Be as engaged as possible in every class. Show up and ask questions. Attend office hours. Get to know your professors. My professors have been invaluable in my success at ASU, but also in being prepared for graduate school. Your education is much more than your grades.”