Farah Eltohamy’s first real reporting experience taught her a lesson that she still carries with her: The president of a mosque told her, “You are one of the only people who’s actually talking to me and asking me about this mosque and telling the stories of the people here." 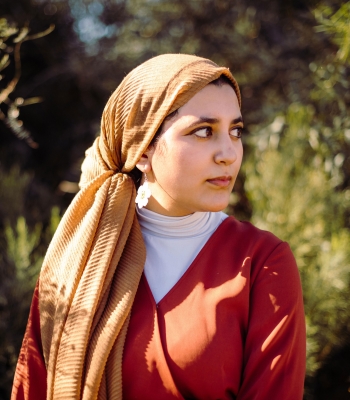 “That was really the moment that changed everything for me," she said. "That moment really reminded me why I do the work that I do. It reminded me of the point of telling the stories of my community, and that moment when he thanked me — it meant a lot to me.”

Eltohamy originally planned to study art and had prepared a portfolio to submit to art schools, but a teacher at her high school in Chandler, Arizona, suggested that she pursue journalism. She was accepted to the Walter Cronkite School of Journalism and Mass Communication and awarded an ASU Leadership Scholarship. She completed her undergraduate degree in three years, using the fourth year to earn her master’s degree through the Cronkite School’s 3+1 program. Eltohamy was named an Outstanding Undergraduate Student for the spring 2021 Cronkite School convocation, scheduled for May 3.

Eltohamy said she has been particularly inspired by Professor of Practice Fernanda Santos.

“She basically gave me the confidence that I needed to stay in this field,” she said.

Answer: I have a weird path to deciding what I wanted to do in college. At first I was a STEM kid. I was really into biology and environmental science, and then I was like, "Wait, now let me just go to art school, because I’m pretty good at it, and I was very passionate." So then I spent the majority of my high school preparing for the art school route. I had an entire portfolio that I was working on and was ready to submit to art schools. At the last minute, I got cold feet. The reason why I got cold feet was because, as much as I love art, I could not see it as a career. I thought about it deeply, and I asked, "What is the next thing I could see myself doing?" And it was journalism, and it felt very natural because I am someone who is very passionate about social justice and politics. I remember having conversations with my AP English teacher and she said, “You’re good at writing, you’re very passionate about social justice, so why don’t you go into the field?” For me, it was specifically spurred by Muslim representation in the news. Journalists from other marginalized backgrounds, in general, have never really been able to break into this field and tell the stories of their communities fairly and accurately. So that’s something that I really wanted to help fix, and the only way you can really fix that is by having more Muslim journalists in this field who can tell the stories of the Muslim community as it is.

A: I worked an entire semester on a piece about the 2020 census and how there’s no category for people from the Middle East and North Africa. This was for Fernanda Santos’ Advanced Bilingual Reporting class, so I worked on this really long story in both English and Spanish for the entire semester. I had the opportunity to talk to the president of the mosque. This was one of my first journalism interviews where I was actually a serious reporter. I remember that conversation; it just felt incredibly natural. I’m Egyptian and he’s Palestinian, so we were switching back and forth in Arabic and English. I remember very specifically, at the end of the interview, he thanked me. He said the only time people in news ever approach him, it’s to condemn some random terrorist attack in some other country as opposed to actually getting to know the community and getting to know him.

A: Fortunately, I got good scholarships to help cover my tuition and everything, and Cronkite is also a really good school. I was fortunate enough to get a high quality journalism education without having to pay too much.

A: Fernanda Santos. I owe her so much. She is truly incredible. So, Fernanda is also a woman of color in journalism and a very accomplished person in journalism. I remember having so many conversations with her. After class or in between classes, we would talk about journalism and its problems. I remember I was telling her about how I had a really uncomfortable incident when I was out reporting and someone was essentially being racist to me. She told me, "Don’t let anybody undermine you. Especially as a woman of color, people will try to bring you down, undermine you and not try to listen to you. They take you for granted." And she said, "Don’t ever let anybody do that. Don’t let anyone walk all over you." That really stuck with me.

A: It’s hard, but it’s all going to be OK in the end. I can get so caught up in my anxiety whether it’s from school, work, life, anything, and most of the time, things end up just fine. Life is too short to be so stressed out.

A: I’m doing a 3+1. I’m currently finishing up an internship at NPR and then I’ll be heading to the Texas Tribune as their Washington reporting fellow, which is really exciting. I’ll get to report on the Texas delegation in Congress and focus on an entirely different state.

A: In a perfect world, what I would do is take every single billionaire’s money and redistribute it to everybody else. I’d put it into solving housing issues, food insecurity, health care, etc.

Daniel E. Rivera, a professor of chemical engineering in the Ira A. Fulton Schools of Engineering at Arizona State University, has been named a 2021 Society of Behavioral Medicine Fellow. The Society of Behavioral Medicine is a multidisciplinary organization of clinicians, educators and scientists who are improving knowledge and applications in the areas of human behavior, health and illness. Th...

Daniel E. Rivera, a professor of chemical engineering in the Ira A. Fulton Schools of Engineering at Arizona State University, has been named a 2021 Society of Behavioral Medicine Fellow.

The Society of Behavioral Medicine is a multidisciplinary organization of clinicians, educators and scientists who are improving knowledge and applications in the areas of human behavior, health and illness. The society honors full members who have made outstanding contributions to advances in the science and practice of behavioral medicine with the distinction of fellow. As of 2020, only 157 of 2,304 Society of Behavioral Medicine members have achieved fellow status, representing less than 7% of members. Rivera, who has been a member since 2011, is the first ASU engineering researcher to be distinguished with this honor.

Rivera was recognized during the 2021 SBM Annual Meeting held virtually from April 12–16.

Rivera has made a career of applying control systems engineering — looking at change over time and managing variability for optimized outcomes — to many fields, including behavioral medicine. He teaches both undergraduate and graduate students this important concept in the School for Engineering of Matter, Transport and Energy, one of the six Fulton Schools.

“The topic of optimized behavioral interventions is a nontraditional problem in engineering,” Rivera said. “Both becoming involved in the field and being able to contribute over a sustained period of time are necessary requirements for qualifying for fellow status. I am glad that the SBM fellowship committee believed that my contributions were meritorious.”

Though engineers and computer scientists work in behavioral medicine, not many are members of organizations like the Society for Behavioral Medicine. However, Rivera says there is an increasing interest in this field for the benefits obtained from engineering approaches, and control systems in particular.

Behavioral medicine is inherently interdisciplinary, so joining a society not focused on engineering is advantageous to Rivera’s work.

“Our ability to learn both practical and fundamental aspects of behavioral interventions, as well as meaningfully communicate the benefits of our work, requires that we actively communicate with communities outside of engineering,” he said. “SBM, and its journals and annual meeting, have been an important resource in this regard.”

Rivera was nominated by Linda Collins, a professor of social and behavioral sciences at the New York University School of Global Public Health, and Eric Hekler, an associate professor of family medicine and public health at the University of California, San Diego. Collins served as Rivera’s mentor for a National Institutes of Health K25 Mentored Quantitative Research Career Development Award. Hekler is a former faculty member in the ASU College of Health Solutions with whom Rivera has collaborated.

They noted his sustained, influential publication history over a period of more than 15 years, his mentorship of students who have contributed to the field of behavioral medicine and his commitment to the activities and goals of the society.

Rivera is particularly proud of the paper he co-authored in the inaugural issue of the research journal Translational Behavioral Medicine in March 2011 — which has been cited more than 1,000 times — among other developments.

“We are pleased with our efforts in casting behavioral theories, such as the theory of planned behavior and social cognitive theory, as dynamical systems, which has, in turn, facilitated the use of control engineering approaches, such as model predictive control, for optimizing behavioral interventions,” said Rivera, who has recently worked on multiple research projects to improve mobile health applications.

Rivera believes this award validates the contributions he and his students and collaborators have made, and that engineering has an important role in this field.

“Engineering can play a role in so many important societal problems,” he said. “Being elected as SBM fellow validates the enriching experience that this work has been for my 31-year career at ASU, and the experience of five PhD graduates, and multiple MS students, who have done thesis and dissertation work in behavioral medicine under my supervision.”

Going forward, Rivera believes this fellowship will give his students, collaborators and him greater confidence as they address the challenges of their current and future research.