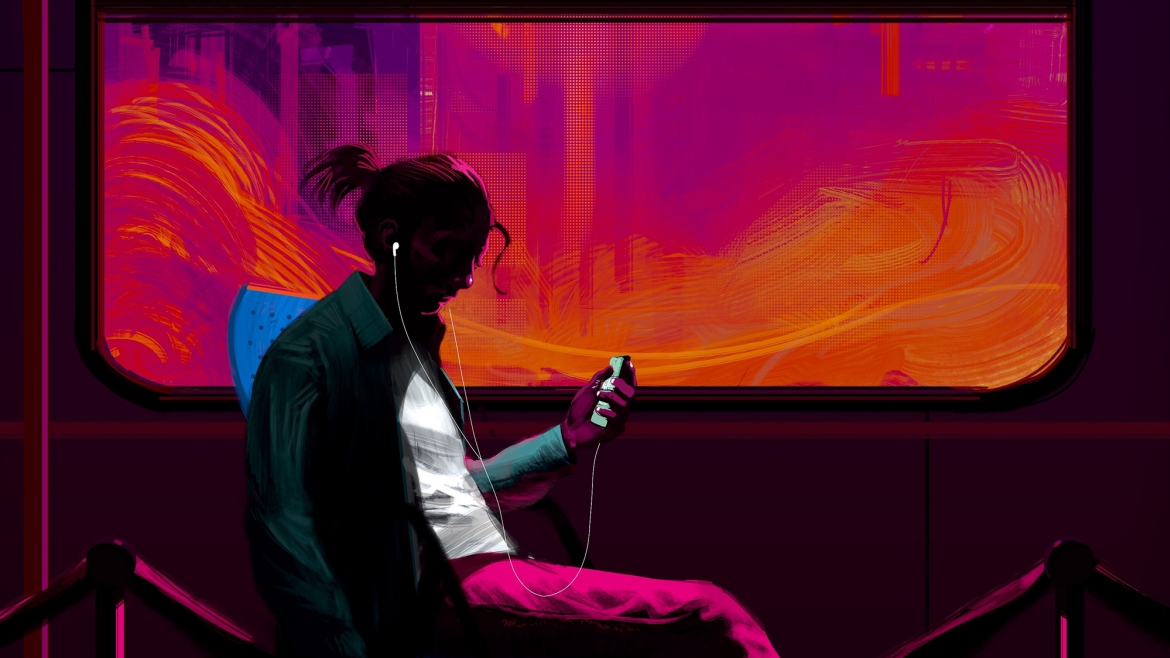 Creating a climate for fiction writing

ASU initiative will publish its 3rd anthology of climate fiction on Earth Day; international contest received submissions from around the globe

Amanda Baldeneaux is living proof that a writer can create solid work under the most trying of circumstances.

Last spring she penned a powerful short story called “Invasive Species” while pumping milk for her infant daughter in the middle of the night.

“I actually wrote this story around 2 a.m.,” said Baldeneaux, a mother of two who lives in Denver. “If your child sleeps well and you have good inspiration and motivation, you can get some good writing done while pumping.”

Not only was it good writing, but “Invasive Species” netted Baldeneaux $1,000 in contest winnings and a spot in a new digital anthology sponsored by Arizona State University’s Imagination and Climate Futures Initiative. The initiative is a partnership between the Center for Science and the Imagination and the Virginia G. Piper Center for Creative Writing. 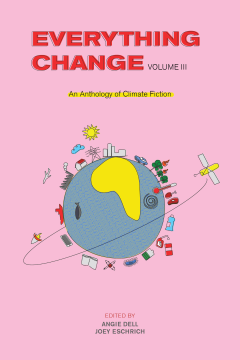 "Everything Change, Volume III," an anthology featuring Baldeneaux and nine finalists from the initiative’s global climate fiction short story contest in 2020, will be released on April 22 to coincide with Earth Day.

Now in its third iteration, the international contest received 580 submissions from 77 different countries. This year’s guidelines asked writers to address how humans can live within Earth’s planetary boundaries at the individual, organizational, communitywide and societal levels.

According to Joey Eschrich, editor and program manager for the Center for Science and the Imagination, these literary works ranged from far-future tales of ambiguous utopian societies, to action-thriller yarns, weird and realistic fiction, fabulism and body horror.

“‘Invasive Species” impressed our judges because of its sharp, vividly drawn main character and its grounded vision of a near-future choked by environmental austerity,” Eschrich said of the 5,000-word short story. “Amanda is also clever and subtle in her use of metaphor and evocative imagery — from natural history museum dioramas frozen in time to towering brown clouds blocking our view of the horizon — to express the malaise and stubborn hope of facing a world in the midst of crisis and slow transformation.”

Submissions were subject to multiple rounds of blind review by an editorial team that included experts on climate science, sustainability, creative writing and environmental literature, including Claire Vaye Watkins, a former Guggenheim Fellow.

Baldeneaux said “Invasive Species” is about Viviana, an aspiring interior decorator working as a diorama painter and night nanny to pay for her father’s home-based intensive care. Her life is on pause to support his medical bills, including time off school and her own medical care and transition surgeries. As the city’s transportation systems shut down, Viviana has to navigate across town to reach her second job, finding her own forward momentum in a world stalled by the devastating impacts of climate change.

“I was nervous writing about a trans character because I’m not trans, and I didn’t want to infringe on a story that’s not my own,” said Baldeneaux, who donated a portion of her contest earnings to three organizations who advocate for trans rights and visibility. “But I also think that trans people exist in our world and they should be portrayed in fiction, movies and television series, and included and normalized in our society.”

Baldeneaux said “Invasive Species” was finalized in about three or four sessions and submitted an hour before the deadline. She said much of her writing focuses on climate change and sustainability. A previous short story she wrote on fracking was published in the Missouri Review in 2019.

“I think a lot about climate change and this contest just spoke to me because I had been thinking about the development of ‘Invasive Species’ for a few months,” said Baldeneaux, a poetry major from the University of Arkansas. “The contest was just motivation to put it down in some kind of form.”

More information about ASU Earth Month and a list of activities.

Top photo: An illustration of Amanda Baldeneaux’s “Invasive Species” by artist João Queiroz for "Everything Change, Volume III." This illustration shows the main character, Viviana, traveling on a city bus between jobs. Courtesy of the Center for Science and the Imagination.

Editor's note: This story is part of a series of profiles of notable spring 2021 graduates.Water is a limited resource, yet life depends on it. The western U.S. has faced severe drought for decades, and it’s only expected to get worse. More needs to be done to make cities better prepared for water crises. Leah Jones is researching ways to do just that, earning her PhD in sustainability at the ...

Water is a limited resource, yet life depends on it. The western U.S. has faced severe drought for decades, and it’s only expected to get worse. More needs to be done to make cities better prepared for water crises. Leah Jones is researching ways to do just that, earning her PhD in sustainability at the School of Sustainability in the College of Global Futures. 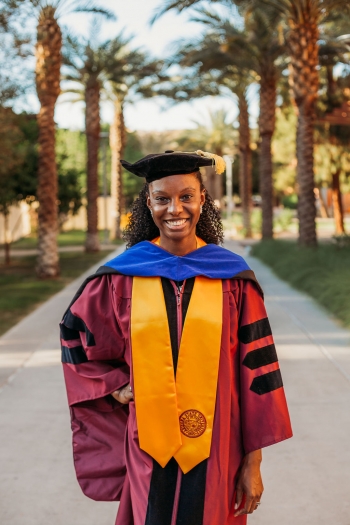 “My main area of focus is on water governance, which is the government, policy, social systems, economics and stakeholders involved in the decision making and management of water resources,” Jones said. “Many people do not know where their water comes from. If you ask them, they’ll just say it comes from the tap. They don't have a full concept of the fact that it comes from a river or a lake. I became fascinated with that. In a lot of the spaces within sustainability, like food and energy, we can adapt to something different. But with water, there’s just water. There’s no alternative.”

Jones is especially intrigued by how cities in desert climates manage their water resources, and that's part of what drew her to Arizona State University and the School of Sustainability.

“I wanted to study water sustainability specifically, and that made ASU even more appealing. I'm so intrigued by how people live in a desert. Now living here, it makes sense. The water governance and water policies are very robust in Phoenix. They are so intricate compared to other places, even other drought cities. I think it can set an example for other places around the world.”

Phoenix was one of the subjects of Jones’ dissertation. She studied the links and interactions between food, energy and water, both here in the Phoenix metropolitan area and in Cape Town, South Africa, to understand how governance decisions and collaboration between those three sectors could make a city more resilient to drought. Jones has also researched water policies and governance in Nepal and Botswana as part of the ASU Study Abroad program.

Research hasn't been her only focus at ASU. Jones is an engaged and active leader on campus, participating in many clubs, organizations and mentorships, including the Graduate and Professional Student Association as president and director of diversity and inclusion. During her time with association, Jones has focused on improving inclusivity at ASU.

“I wanted to amplify students' voices that I felt weren't being heard, especially BIPOCBlack, Indigenous and people of color voices," Jones said "One of the things I worked on was gathering those voices and elevating them to the administration. What I did, in addition to what my predecessors did as well as people who have come after me, ultimately helped lead to the LIFT initiative put forth by President (Michael) Crow. That has been encouraging to see. You just have to keep pushing and taking little steps forward, and ultimately change can happen.”

Making those changes is something Jones wants to continue as she works toward her goal of becoming a tenured professor.

“Within higher education, mentorship is one of the most important things to me, especially being a Black woman. There are very few Black professors in the U.S., and often it's hard for undergraduate students to imagine a career in higher education, science or research because they don't see anyone who looks like them. I would love to be a mentor and encourage BIPOC students to pursue careers in research and higher education.”

The sustainability program has given Jones the resources to become a strong leader and make positive change.

“I've grown as a student and a sustainability scholar," Jones said. I’ve explored so many different, intellectual perspectives which have been eye-opening and encouraging for me and my development. The program is supportive of students; I feel like I have a community.”

Question: What was your “aha” moment when you realized you wanted to study sustainability?

A: My first semester was very eye-opening. I think when students came into sustainability, we had much more positive perspectives on how we were going to change the world and what we wanted to do with changing food systems, water systems or finding renewable energy sources. When we realized the complexity of all of these different systems, it was a bit discouraging at first. But I think it ultimately led me to understand that it's not that we can't address any of these problems, it's just that we need to address multiple problems at once, and sometimes that results in a more incremental and slower change. When we're able to consider this system thinking approach, instead of more siloed thinking in the different areas of sustainability, that can lead to long-term change.

A: My adviser, Professor Dave White, has been very influential and encouraging throughout this whole process. He has helped shape me to be a successful student and a successful scholar within sustainability. I’ve learned a lot from him, including what it looks like to move beyond being a student and into becoming a professor within higher education and how to grow in that space.

A: This is not my advice, but it was really helpful for me, so I continue to pass it on. A PhD is not a sprint but a marathon; it takes time. Getting things done happens in little by little increments, but it will get done. You can't try to sprint to the finish line because you'll just burn out at the beginning.