This May, Junehyoung Jeon will be graduating from ASU with a Bachelor of Science degree in astrophysics from the School of Earth and Space Exploration with honors from Barrett, The Honors College and a minor in physics. He is also the School of Earth and Space Exploration Dean’s Medalist for 2021, having earned this award through his excellent academic performance, his collaborative spirit doing research and his fearless enthusiasm toward solving new problems. 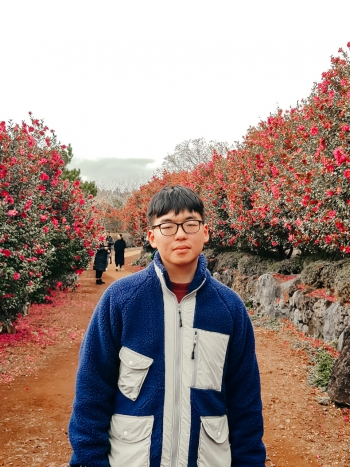 Jeon was born in Seongnam, South Korea. His father's work sent his family to Liberia, where he attended the American International School and finished elementary school.

“My parents thought that I wouldn't fit very well coming back to Korea, so they enrolled me in a school in New York to continue with the American school curriculum,” said Jeon. “I decided that I wanted to study astrophysics during that time and graduated high school. Since then, I have been just trying to achieve my goal which led me to Arizona, and after graduation, I will be moving to Texas.”

At ASU, Jeon was active in Professor Rogier Windhorst’s cosmology research group and in Windhorst’s AST 322 course (Introduction to Galactic and Extragalactic Astrophysics). As part of the AST 322 class, Jeon wrote a Python solver for the set of Friedman equations that govern the expansion of space in general relativity.

“Junehyoung Jeon has been one of my very best undergraduate students in my research group at ASU in the last 34 years,” said Windhorst. “He single-handedly took it upon himself to model and address how much ionizing radiation can come from galaxies in the first billion years as observed with the Hubble and Spitzer space telescopes and has submitted his paper for publication in the Astrophysical Journal.”

Jean has been accepted into the doctoral program for astronomy at the University of Texas in Austin, where he will work with faculty to use the James Webb Space Telescope to build on this important work.

“Keep an eye on him,” said Windhorst. “A lot more good work will be forthcoming from him.”

Jeon answered some questions about his time here at Arizona State University.

Answer: It was around middle school when I started thinking about what I wanted to do in the future. Science always interested me, and among the different fields of science, physics seemed the most interesting being a more fundamental natural science. In physics, astrophysics seemed to be a topic with the most interesting phenomena and objects to learn about and study, so I chose to study astrophysics since then.

A: I thought before that research was something you'd mainly get involved in at a higher level of education. However, by contacting and working with different professors at ASU, research has been my main work, apart from my classes, especially towards the last few semesters. If you are able to dedicate the time, you could start to work on things you want to in the future, as the faculty here supports you through it for as much as you need.

A: I was accepted into the Barrett Honors College, which I knew was a unique opportunity. Furthermore, ASU offered me a New University Scholarship, which was a rare opportunity for an international student like myself who could not apply to many scholarships offered only to U.S. citizens or permanent residents.

A: Professor Rogier Windhorst was the most influential to me at ASU. He guided me through writing of my senior/honors thesis, which also is becoming my first publication. It's not a single piece of advice or a tip that Rogier gave me, but a general lesson on doing research in astrophysics and presenting the results.

A: Ask for help when needed. The professors helped me when I wanted to be involved in research. The classmates helped me through classes. The university houses other various people who are willing to help you, so ask for help, maybe even asking to find who you can go to for help.

A: The Noble Library was located between many of the buildings where I usually had classes, with comfortable seats and an environment for studying. I used it for versatile reasons: studying for my classes, resting before moving between buildings on campus, or meeting with others for various reasons.

A: As someone interested in astrophysics, I would use the funding for machine learning or creating simulations of astrophysical objects. With the Hubble Space Telescope and the soon-to-be-launched James Webb Space Telescope, the data available in astrophysics is getting too large to be handled by people alone, and machine learning would be the logical next step to better analyze the observational data. We need powerful computers to run complex simulations of globular clusters, reionization and such to discover how the universe evolved and to help solve intellectual questions and problems that currently exist.

Editor's note: This story is part of a series of profiles of notable spring 2021 graduates.At just 19, Jada Allender began her pursuit of both a JD and Master of Sports Law and Business (MSLB) degree from the Sandra Day O’Connor College of Law at Arizona State University.From barrel racing and driving combines while growing up in Eugene, Oregon, to graduating from law school, the now 22-year-o...

At just 19, Jada Allender began her pursuit of both a JD and Master of Sports Law and Business (MSLB) degree from the Sandra Day O’Connor College of Law at Arizona State University. 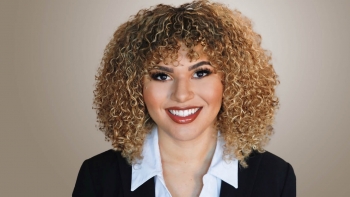 An ASU Law student at just 19, Jada Allender has taken her passion for sports business to earning a dual JD and MSLB degree this spring. Download Full Image

From barrel racing and driving combines while growing up in Eugene, Oregon, to graduating from law school, the now 22-year-old looks forward to a promising career.

With a bachelor's degree from the University of Oregon, where she was a student manager for the football team, Allender says her passion for the industry only grew stronger when she started in the Allan “Bud” Selig Sports Law and Business program at ASU Law. Studying the legal underpinnings in sports and falling in love with corporate law led to more opportunities for Allender, who has done consulting work for sports businesses and created her own startup company.

Allender, a recipient of the Honorable Cecil B. Patterson Jr. Scholarship and the Kappes Family Scholarship, says she also took advantage of the experiential learning opportunities ASU Law offers. She completed externships at Gammage & Burnham, Greenberg Traurig, the Arizona Supreme Court, and Poli, Moon & Zane. During her summers, she worked as a summer associate at Snell & Wilmer in Phoenix, where she will be returning as an associate attorney after graduation.

And she still found time to do more.

“Beyond educational and career opportunities, ASU Law has led me to many unique experiences,” said Allender, noting when she was interviewed by the “Today” show and “NBC News” about the impact late Supreme Court Justice Ruth Bader Ginsburg had on women studying the law.

Allender also competed in case competitions, served on the Corporate and Business Law Journal, was on the board of the Black Law Students Association (BLSA), completed a fellowship at the Phoenix Committee on Foreign Relations, and helped ASU Law create a Public Interest Fellowship program.

“Since BLSA has many members who are passionate about giving back to the community and working in the public-interest space, we are so happy to see this fellowship initiative take hold,” Allender said in an ASU News article when the program was announced. “Many students pursue public-interest job opportunities but have to turn those offers down and accept a different position simply because the other position is paid. These fellowships will allow our students to chase their dreams in any legal field without stressing over their personal financial situation.”

Reflecting on her accomplishments while at ASU Law, Allender says she is “extremely grateful for all of the opportunities at ASU and the tremendous support I have received from faculty and staff. And, none of this would've been possible without the love and support from my amazing mother, Sarah, who made single-parenting look like a breeze.”

Answer: I chose ASU Law because of its unique dual-degree program that allowed me to earn both a Juris Doctor and Master of Sports Law and Business.

A: While I can't choose just one, and I've had many amazing professors along the way, Professors Andrew Carter and Rhett Larson have taught me countless things that have shaped the lawyer I hope to be.

Q: What’s the best piece of advice you’d give to those contemplating ASU Law, and those still in law school?

A: Find some 3Ls or recent graduates and have them explain the timeline of law school to you! I had some phenomenal TAs during my first semester of law school that helped me understand the importance of networking during the first semester and how that would impact the interviews that started in January.

Building off of that, those interviews for your first summer job can often have an impact on your second summer job or possible externships along the way. Understanding this and being prepared for the different stages of law school is a must!

A: That's a tough question because there are a lot of issues I'm passionate about. But if I had to pick one, it would be helping kids growing up in tough situations and providing support and a stable home. Whether it is homeless youth, youth in foster care, youth suffering from domestic abuse, or any youth in need, I would dedicate the money to supporting them and improving their situation. I attribute basically all of my success to the amazing upbringing and endless love and support I received from my mother. That kind of unconditional support and encouragement is something I wish every child had access to growing up.