Nicolo G. Muniz recognized that his ongoing quest to be an entrepreneur meant he needed to learn more about the law. And the online Master of Legal Studies (MLS) program at the Sandra Day O’Connor College of Law at Arizona State University was just the way for him to do it. 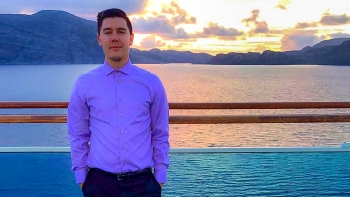 “Like many people, I dream of being self-employed by creating my own vision, and as I began to venture out into the world of entrepreneurship, I quickly discovered that my understanding of law, or really lack thereof, was clearly going to hold me back from accomplishing my goals,” said Muniz, who is graduating this spring with an MLS degree in contract and business law.

Starting in real estate — flipping homes — he says was able to hold his own because he was surrounded by a good team.

“But as I expanded into other interests, such as commercial brewing, I knew I had to grow my understanding of both business and contract law if I didn’t want to be completely reliant on other parties to hold my hand,” said Muniz, who is from Rio Rancho, New Mexico. “Everything I have personally done as an entrepreneur has either entailed business law or contract law, so naturally these are the areas in which I wanted to be most fluent and focused my studies.”

That, Muniz says, was the “aha” moment that fast-tracked his enrollment to ASU’s online MLS program. And thanks to his current employer, Sandia National Laboratories, and its generous internal tuition assistance program, most of his degree expenses were covered.

Answer: The initial reason I chose ASU Law is that I had such a fantastic experience with my bachelor’s degree through ASU Online. The courses were challenging yet enjoyable, and the online platform was easily navigable and consistent from course to course.

After my bachelor’s degree, I participated in several other online courses through a variety of different institutions and programs, and unfortunately, some of these could be painful at times in that the platforms would crash or be limited in functionality. Additionally, and perhaps the most influential reason for me, the support system that ASU provided was unmatched. It was never difficult to speak to an adviser, a success coach, or get ahold of admissions when I needed them; there was always someone willing to guide or assist me, and that was something I sorely missed when I needed help in other programs.

Not everyone holds themselves to the same standard of student services as ASU in my personal experience, so when I started gravitating toward a formal education in law, the first place I thought to look was ASU Online. Once I discovered ASU Law offered the online master’s degree I wanted, all that was left was to check out the curriculum to ensure it was a good fit, and not surprisingly, of course it was. ASU Law offered courses that were immediately applicable to what I was experiencing in the real world, and that was exactly what I was searching for in a program.

A: In all honesty, I don’t imagine much in my current situation will change after graduation. I will take the knowledge and lessons learned from this program and incorporate it as I continue down this path. I do plan to continue with school, with two more master’s degrees pending, and also with entrepreneurship. I hope to have the brewery up and running by the end of this calendar year, and if that happens I imagine it will take up much of my professional focus. I do suspect that at some point I will once again be drawn to formal legal education, so I wouldn’t rule out pursuing a JD at some point.

Outstanding astrophysics grad reflects on the importance of mentors for success

Editor's note: This story is part of a series of profiles of notable spring 2021 graduates.Delondrae Carter will graduate this May with a degree in astrophysics from ASU’s School of Earth and Space Exploration. His interest in the universe first began in fourth grade when he worked on a project demonstrating the vast scale of the solar system. From there, he was inspired to learn as much as he...

Outstanding astrophysics grad reflects on the importance of mentors for success

Delondrae Carter will graduate this May with a degree in astrophysics from ASU’s School of Earth and Space Exploration. His interest in the universe first began in fourth grade when he worked on a project demonstrating the vast scale of the solar system. From there, he was inspired to learn as much as he could about astronomy and astrophysics. “That first project helped me discover that the world was a much bigger place than I initially thought,” said Carter. 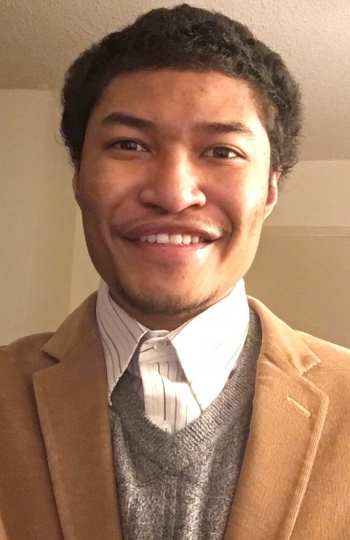 Carter chose ASU for his undergraduate studies and was awarded a New American University Scholarship President’s Award. That was soon followed by an Interdisciplinary Enrichment Fellowship and a Goldwater Scholarship, which is one of the most prestigious awards for STEM majors.

Carter credits his academic growth as an undergraduate student to astronomy Professor Rogier Windhorst’s guidance and support. He attributes earning the Goldwater Scholarship to Windhorst’s personal commitment to his success. Carter also became a mentor for the ASU Sundial program, which pairs beginning undergraduates with upper-level undergrads, providing academic support, career guidance and personal growth in fields that students may find difficult to navigate.

“Professor Windhorst’s support throughout my academic career played a large role in my decision to become a Sundial mentor,” said Carter. “By being a mentor, I can help build others up in the same way that I have been built up.”

This fall, Carter will be returning to ASU as an astrophysics PhD student to work with Professor Windhorst and Professor Philip Mauskopf on a combination of projects including SKYSURF and SPHEREx. Project SKYSURF will measure the panchromatic sky surface brightness and source catalogs from all archival Hubble Space Telescope data, and SPHEREx is a future near-infrared space observatory that will perform an all-sky survey to measure the near-infrared spectra of approximately 450 million galaxies.

“Rarely has an undergraduate student, with little experience to begin with, picked up on a project as fast as Delondrae,” said Windhorst. “He has an easygoing collaborative spirit and never hesitates to ask questions if something is not clear to him. We all fully enjoy working with Delondrae, who not only possesses a fearless enthusiasm towards solving new problems, but also managed to incorporate his additions to the project via GitHub in line with all of the existing code.”

Carter shared a few thoughts about his time here at ASU.

Answer: I once thought during my first two years at ASU that my lack of programming knowledge would always be a major obstacle that would prevent me from succeeding in an astrophysical research career. I dreaded the few programming assignments I had throughout my freshman and sophomore years, and I remember mindlessly inputting sequences of commands without understanding why the commands worked. Programming was an enigma to me until the summer of 2019. My cosmology professor, Rogier Windhorst, had offered me an opportunity to work with one of his colleagues, Dr. Russel Ryan, at the Space Telescope Science (STScI) on a project designed to study the thickness and dark matter distribution of the Milky Way’s disk through the lens of brown dwarfs. Everything I did at the STScI revolved around programming with Python and Linux, but unlike my previous experiences, I wasn’t immediately thrown into the fray. My mentor taught me the basics before assigning me to more complex tasks, ensuring I understood the theory behind everything I did. Soon I was fluent enough to download and process Hubble Space Telescope data. This experience taught me that programming isn’t as hard as I initially thought — I just needed someone to take the time to explain things to me in a way I could understand. It also taught me the importance of mentoring in the astronomical community, which is why I chose to be a spring 2021 ASU Sundial mentor.

A: Get involved in research as soon as you can. The concepts taught in classes will provide a solid knowledge foundation to build upon, but skills such as programming and data analysis are best developed through research projects. Seek out and apply for summer internships you find interesting, or reach out to a professor and ask if they have any ongoing projects you could get involved in. You’ll be surprised how much and how quickly you learn.

A: I enjoyed ordering crepes at the Crepe Club outside the PSH building with my friend Connor Gelb during breaks between classes. Connor and I would usually work together on homework during these breaks, or simply talk about extra dimensions, the nature of time and other outlandish scientific topics. I would also often go to the Crepe Club early in the morning to order a coffee for a much-needed energy boost right before physics and math exams.

A: If I were given $40 million dollars to solve one problem, I’d want to put it toward a problem I could feasibly solve. Worldwide problems such as poverty would be incredibly difficult to solve with any amount of money given the complex nature of such issues. As someone interested in both astrophysics and science communication, I think a problem I could reasonably address with $40 million dollars is the lack of underrepresented minorities in astronomy and astrophysics. I would create a yearlong astrophysics training program designed to teach underrepresented minorities the fundamental skills used in an astrophysical research career through work on astrophysics projects with professors and research scientists.