Arizona State University researcher Petra Fromme has received the 2021 Christian B. Anfinsen Award. The honor is bestowed by the Protein Society, the premier international association dedicated to supporting protein research.

In presenting Fromme with this prestigious prize, the Protein Society recognizes her groundbreaking efforts to advance the field of protein research, using ultra-high-speed X-ray crystallography to probe matter at the tiniest scales and shortest time durations. 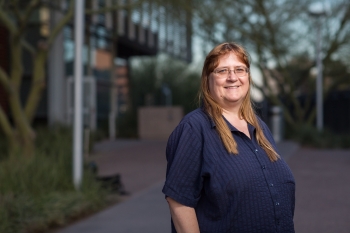 Petra Fromme is the director of the Biodesign Center for Applied Structural Discovery at ASU as well as a Regents Professor of biochemistry with the School of Molecular Sciences in The College of Liberal Arts and Sciences at ASU. Download Full Image

These investigations have greatly advanced scientific understanding in two critical areas, helping to streamline the development of safer and more effective drugs for a broad range of human diseases and furthering research into alternative energy sources, by probing the molecular intricacies of photosynthesis.

Fromme is the director of the Biodesign Center for Applied Structural Discovery at ASU as well as a Regents Professor of biochemistry with the School of Molecular Sciences in The College of Liberal Arts and Sciences at ASU. She is a world leader in developing and applying new technologies for investigating protein structure.

The Christian B. Anfinsen Award is given in recognition of “significant technological achievements and/or methodological advancements in protein research.” The award was established in 1996 and named for Nobel laureate Christian Boehmer Anfinsen, whose important research focused on the structure and function of enzyme proteins.

In their announcement, the Protein Society notes that Fromme has displayed uncommon leadership in the field, “assembling a large network of collaborators spanning chemistry, physics, data science, biology, materials science and engineering to pioneer the method of serial femtosecond crystallography (SFX), which is used to collect snapshots of molecules in action. She has made important contributions to the structural biology of large membrane protein complexes, especially those involved in light capture and energy conversion.”

The Anfinsen Award will be presented at the Protein Society’s 35th anniversary symposium, where Fromme will deliver an invited plenary talk. The conference will take place virtually July 7–9 and July 12–14. The online meeting will feature more than 50 speakers, including invited and contributed talks, Protein Society awards, live poster presentations, thematic workshops on crucial topics such as diversity and inclusion, and networking opportunities.

Agents of health and disease

Proteins are the “workhorses” of all living cells, catalyzing all essential functions in a cell. The discovery of their structure, function and dynamics is essential to understand the molecular basis of life.

While genetic information in the form of DNA has only four building blocks, proteins are much more complex as their “alphabet” consists of 20 letters in the form of 20 amino acids, strung together like necklace beads. Proteins can fold into an almost limitless variety of three-dimensional shapes and interact with each other to form large supercomplexes that act as molecular machines to carry out essential life functions. The function of proteins is therefore dependent on their amino acid composition, 3D conformation, interactions and the dynamics of the complexes.

Proteins perform myriad roles in the body, catalyzing all vital metabolic reactions essential to life. Examples include energy generation by respiration and photosynthesis, cell-cell recognition, import and export of products into cells, DNA synthesis and repair, nerve function, smelling, tasting, hearing and vision to name a few. In addition to providing the structural framework of all tissues, proteins maintain proper pH and fluid balance and play a central role in the body’s immune system. When protein function goes awry, it can lead to a broad array of serious diseases.

Researchers have worked to develop drugs that can act on proteins, binding with them and altering, enhancing or in some cases, deactivating their functions. To accomplish this, a detailed map of the protein’s molecular organization is needed.

One of the most powerful techniques for investigating protein structure is through X-ray crystallography. Here, a sample of interest is crystallized, then interrogated with a beam of incident X-rays. When these X-rays strike the sample, the light is diffracted by the crystalline arrangement of atoms in the sample, and the patterns of diffracted X-ray light are caught on a detector-screen. By interrogating the crystal in all possible orientations with the X-rays, a detailed, three-dimensional portrait of the protein’s structure can be determined by X-ray crystallography.

The technique has been an exceptional boon to science, helping researchers to explore the inner workings of biological molecules, including drugs, vitamins, proteins and nucleic acids such as DNA. X-ray crystallography remains an essential method for characterizing the atomic structure of new materials and their properties as well as assisting in the design and validation of new pharmaceutical drugs.

One major drawback in the past was been the fact that X-rays damage molecules when they interact with them, destroying the molecule under examination. This X-ray damage can be slowed down by freezing the crystals and collecting data at very low temperatures; however, only a static picture of the frozen protein can then thereby be obtained.

Fromme and her team of colleagues at ASU, as well as their national and international collaborators, have pioneered a radically new version of X-ray crystallography, one which extends to the extreme of the method’s capacity to peer deeply into matter at the atomic scale. The method, known as serial femtosecond crystallography (SFX), works by exposing nanocrystals to brilliant and extremely short pulses of X-ray light, emitted by powerful instruments known as X-ray free electron lasers (or XFELs).

One advantage of using femtosecond pulses is that they can outrun the destruction of the crystal caused by powerful X-ray radiation, producing a usable diffraction pattern before the crystallized sample explodes. The technique, sometimes referred to as “diffraction before destruction,” has revolutionized the field, allowing researchers to study the protein structure and function at room temperature under conditions that mimic nature and allow them for the first time to produce molecular movies of biomolecules at work.

“I am feeling very honored to receive the prestigious Anfinsen Award  from the Protein Society,” Fromme said. “I am very happy that they honor my contributions to the technique of serial femtosecond crystallography that has revolutionized the field of structural biology, as we can 'see' for the first time the building blocks of life in action. With the study of the structural dynamics and function of the proteins in their near native environment, without damage, we reach new shores where we can understand their mechanism of action at the atomic scale.”

The use of XFELs has allowed Fromme and her colleagues to produce high-resolution 3D images of many protein structures as well as the first molecular snapshots of their reactions. These include structures of all-important membrane proteins, which are targets for the majority of pharmaceutical drugs and have been notoriously difficult to crystallize and characterize in the past.

Using the new technique, Fromme and her colleagues have produced the first molecular snapshots of the functioning of BlaC (a crucial protease enzyme in antibiotic resistance) and the Cytochrome c oxidase (essential for respiration). They also have unraveled dazzlingly detailed structures for such important proteins as Flpp3 (a virulence factor responsible for the deadly effects of the bacteria causing tularemia), angiotensin II (a receptor regulating blood pressure), DIPP-NH2 (an opiate ligand involved in pain pathways) and other medically important biomolecules. Fromme’s research has also made major inroads in uncovering one of nature’s central mysteries — how plants and photosynthetic microbes convert the radiant energy of sunlight into useful energy.

“This research has huge impacts on the development of novel drugs that catch the drug targets in their active functional state. It will also lead to the development of new energy sources by understanding how plants convert light into energy, allowing the design of new systems that combine the efficiency of nature with the stability of man-made systems,” Fromme said.

While Fromme plans to continue racking up major advances in structural research, using gargantuan XFEL instruments like the Linac Coherent Light Source at the SLAC National Accelerator Laboratory, the PAL XFEL in Korea or the newly designed European XFEL in Schleswig-Holstein, Germany, she is particularly excited about the development of two radically new X-ray accelerators under construction at ASU, a development that she has initiated.