That was Arizona State University President Michael Crow’s message to 13 university presidents from around the world who are seeking to put their education online.

“The moment is here,” Crow said. “The technology is viable. The partners are here. The outcomes are measurable. It’s time to plug one’s nose and jump into the water. The only way to do this stuff is to do it. If you sit around in the normal academic world and discuss it, it will take years.”

Crow’s interview was part of the launch of the Mastercard Foundation Scholars Program e-Learning Initiative, which aims to recreate the online learning accomplished at ASU overseas.

“Our degrees for online students don’t say online,” Crow said. “There’s no difference. … We will graduate 12,000 students this (fiscal) year from our online activities.”

“I wish we had done this earlier,” Crow said. ASU already had a fully developed online presence before the pandemic, enabling the university to pivot quickly last year.

It was more than putting classes online, Crow said. It began with a “deep transformation of the institution,” beginning with the university charter's mandate to measure itself by whom it includes, not whom it excludes.

Many universities rate themselves on how many applicants they turn away.

“That’s not a measure of anything except how many seats you have,” Crow said. “The goal is the success of all these communities.”

Scaling up learning and reaching more students across the country and world means more people going to college who previously couldn’t. ASU produces four times the number of graduates with the same faculty it had 18 years ago.

“We’re finding ways for students (who have dropped out) to finish,” he said. “We’re seeing fantastic outcomes.”

Financial barriers to access have been removed. Tens of thousands of students pay no tuition at all because the university is operated efficiently with technology. Technologies enable student success.

Looking back at his 19-year tenure at ASU, what would Crow do differently in terms of online education?

“We would move faster,” he said. “We already move faster than anyone else. … What we’re finding is we’re moving too slow. … Think leapfrog.”

The rate of innovation is faster than the academic calendar and universities need to change rapidly.

“I can’t begin to tell you all the things we’re doing,” Crow said. One example he cited was opening a film school in three locations.

Arizona State University's Center for the Study of Race and Democracy will feature influential civil rights and social justice leader Rev. William J. Barber II at its annual Delivering Democracy program on Saturday, April 17.Barber, a courageous champion of social justice and human rights, is known and deeply respected for his unwavering intentional and deeply collaborative advocacy for underserve...

Barber, a courageous champion of social justice and human rights, is known and deeply respected for his unwavering intentional and deeply collaborative advocacy for underserved and marginalized populations across the nation. His work and example have done much to model purposeful engagement and to demonstrate the deep power of purposeful collaboration and partnerships. His calls for a moral democracy underscore the attention to humanity that should transcend partisanship and that can lead to justice for all. 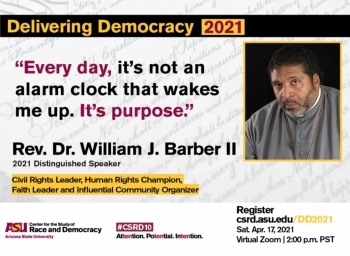 The center's annual Delivering Democracy program creates a powerful forum for visionary speakers to discuss critical issues of race and democracy with the local community as well as with a national and global audience. The program will feature a dialogue with  Barber facilitated by Lois Brown, director of the center.

In advance of the program with Barber, the center will host a weeklong virtual community resource fair, which will enable direct engagement with community organizations in and beyond Arizona.

Visit csrd.asu.edu/DD2021 to learn more and to register for the Delivering Democracy program and for the virtual community resource fair sessions.

Media is invited to attend. Brown will be available for interviews in the days prior to the event. Based on availability and space is limited. To request full event access and/or an interview, RSVP with Suzanne Wilson at Suzanne.Wilson.1@asu.edu.