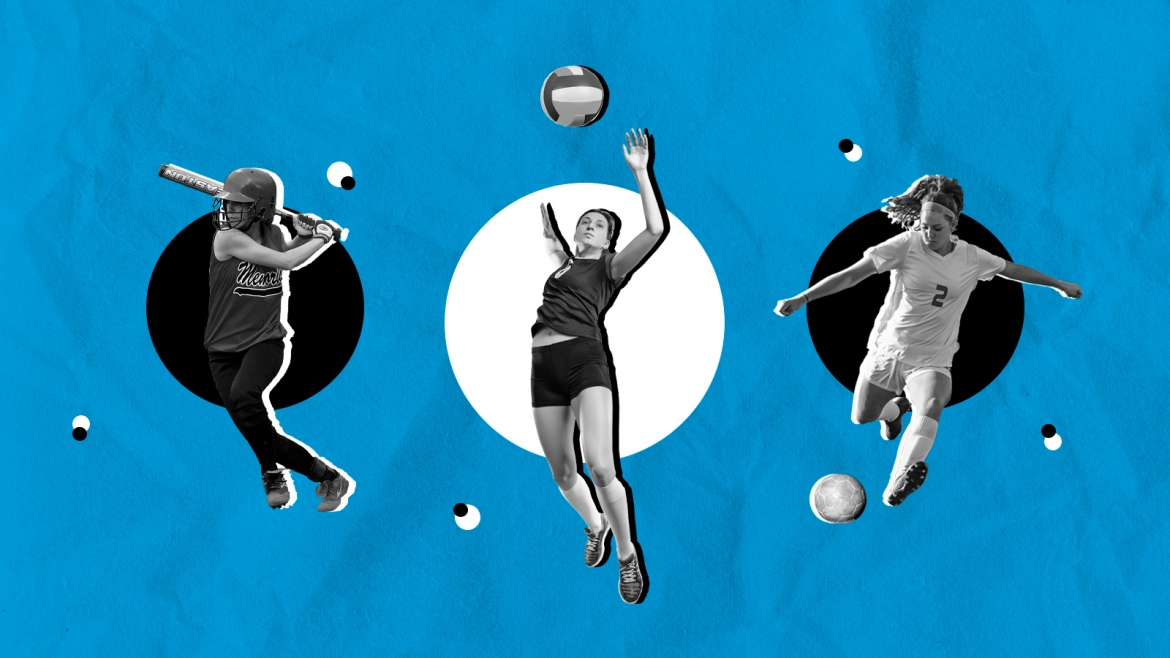 Empowering young women to coach and organize can create opportunities for them, their communities

Sport can be considered one of the most powerful platforms to promote strength, empowerment and inclusion. Over the last few decades, women have made waves in the movement to promote gender equality in sports, clubs and organizations. Structural changes that break gender barriers have empowered young women to create groups that make them feel heard and understood.

In fact, recent youth sport statistics show that girls are participating in sports like basketball and soccer at similar rates as boys their same age. The data also highlights similarities across genders in terms of the average age they begin playing sports and the average duration they participate in youth sports.

But as Alaina Zanin points out, when race and socioeconomics are taken into account, children of color and those living in underserved areas are significantly less likely to participate in sport, particularly for girls.

Zanin is an assistant professor in the Hugh Downs School of Human Communication and faculty affiliate in the ASU’s Global Sport Institute. Her research examines the intersection of health and organizational communication, specifically as it relates to girls’ participation in sport.

As a former collegiate track and cross-country runner, her current research on gender disparities relates to her own experiences as a young female athlete, which inspired her to make a difference in other girls' lives through research and community projects that break down barriers to participation.

Question: Why do women still feel the need to create their own groups, especially when it comes to sport?

Answer: All-female sport groups create space for empowerment and belonging. They are also a safe space for women to try on athletic identities without feeling stigmatized or marginalized in traditional sport contexts. Sometimes trying out a new activity can be scary or seem intimidating, but our research indicates that all-female sport groups provide an opportunity for women to support one another in learning a new sport.

For example, in my study of an all-female rugby team, players joined and continued participation because of the strong social bonds they created and because they felt they were able to demonstrate athletic prowess and strength without feeling judged. In other sport contexts, they reported feeling out of place or stigmatized.

Q: How do female sports, games and clubs influence identity?

A: Female athletes’ participation in sport expands their possibilities for identity enactment. That is, when women participate in sport they can embody both athletic and feminine identities — expanding what it means to be a woman and an athlete.

Often in athletics, female athletes feel a tension between their feminine identity and their athletic identity, because sport contexts are historically associated with identity stereotypes of masculinity. This creates a double-bind or “a rock and a hard place” for female athletes, where they believe they cannot enact athletic and feminine identities at the same time.

Q: Why are young women less likely to participate in sports, especially those in underserved communities and young women of color?

A: Gender disparities in sport participation are complex, particularly for women and girls who reside in underserved communities and for young women of color. There are several issues related to structural barriers including fewer sport participation opportunities in underserved communities and the rise in high-cost club sports in the U.S. without alternative options for low-cost, recreational youth sport.

There are also less tangible, communicative, identity-based reasons like girls and women not seeing themselves participating in and leading sport organizations. For example, recent survey research indicates that only 26% of youth sport coaches are female, a proportion that is greatly smaller than the national average of girls that participate in sport in the U.S.

Q: Why is health and organizational communication especially relevant to gender equality in sport?

A: Participation in sport has a host of immediate and long-term positive outcomes for girls, particularly in terms of their socioemotional development. We also know that trying out sports early increases the likelihood that girls will take on athletic identities and participate in sport through high school. This participation through high school is extremely important because it is related to a decrease in risky behaviors, like experimentation with drugs and alcohol, and also increases the likelihood that these girls will maintain a habit of exercise throughout their lives. Moreover, girls that participate in sport are more likely to be leaders later in their workplaces. Taken together this research indicates that girls’ early exposure to sport has the potential to reduce gender inequities in other contexts as well. It is just one more hammer for the glass ceiling.

Q: What challenges still exist and how can we overcome them?

A: These challenges can be divided into both resource barriers and discursive barriers. Girls need resources in terms of more opportunities for low-cost sports, transportation and more female coaches. At the same time, discursive barriers in terms of gender stereotypes still exist in athletics. These are reproduced through everyday talk and through larger societal narratives associated with gender and athletic identities.

Some of the solutions include changes to inclusivity and involvement. We can change the way we talk about women in sport, change the way that we talk to young girls and female athletes, change societal narratives that perpetuate stereotypes associated with gender and athletics, and empower girls and women to respond to stereotypes associated with female athletes.

You can also get involved by becoming a youth coach for girls in your community. Myself and two other professors at ASU will be leading an Applied Coaching Course (spring 2022) partnered with Girls on the Run (GOTR) Maricopa Co., where students will spend four weeks in the classroom learning coaching skills, and then 10 weeks leading a GOTR team as a community coach at an underserved site within the community.

If we connect women’s and youth sport organizations that have the same goals, we can maximize partnerships, resources and sport opportunities for girls and women. Empowering young women, particularly young women of color to lead, coach and organize can open opportunities for themselves and their communities.

Arizona State University’s plans for its new ASU California Center in downtown Los Angeles took another step forward with the announcement that the W. P. Carey School of Business will be launching its highly ranked Master of Science in business analytics in California for the fall 2021 semester.The program is currently accepting applications for the first cohort, part of ASU’s inaugural class ...

The W. P. Carey School of Business will be launching its highly ranked Master of Science in business analytics in California for the fall 2021 semester

Arizona State University’s plans for its new ASU California Center in downtown Los Angeles took another step forward with the announcement that the W. P. Carey School of Business will be launching its highly ranked Master of Science in business analytics in California for the fall 2021 semester.

The program is currently accepting applications for the first cohort, part of ASU’s inaugural class of students based in California. The ASU California Center is located in the historic Los Angeles Herald Examiner building, constructed by William Randolph Hearst and completed in 1914. Opening in August, ASU’s new home in California will include classrooms, conference spaces, venues for community events and more. In addition to the W. P. Carey School, more than 15 academic colleges and administrative units will call the ASU California Center home, including the recently christened Sidney Poitier New American Film School.

The W. P. Carey School created the MS-BA in 2013, in response to demand for an intensive data analytics master’s degree from industry partners. In the years since, the program has attracted thousands of students from across the country and around the world due to its market-driven curriculum, the reputation of the W. P. Carey School’s departments of information systems and supply chain management, and ASU’s ranking as the most innovative university in the country six years in a row, according to U.S. News & World Report.

As a result of the program’s longstanding quality, the W. P. Carey School has been ranked No. 10 in the country for business analytics graduate programs in the 2022 Best Graduate School rankings, also released by U.S. News & World Report — ahead of UCLA, USC and Loyola Marymount University. In the latest rankings, 30 W. P. Carey programs and disciplines are ranked top 25 by U.S. News, the most for any business school in the nation.

“We are always so honored to be included among our peers as one of the best business schools in America. That’s especially true with a field as important and competitive as business analytics,” said Amy Ostrom, interim dean of the W. P. Carey School of Business and the PetSmart Chair in Services Leadership. “As we expand the program to offer a solution for students in Southern California that is not only closer to home but also designed to accommodate the busy schedules of working professionals, we’re extremely proud of what the MS-BA has achieved so far and excited about its future in downtown LA.”

The 12-month curriculum will be delivered on a flexible weekly schedule. Students will take classes on Wednesday evenings from 6 to 10 p.m. via ASU Sync, an asynchronous, technology-enhanced and fully interactive remote learning modality that includes live lectures via Zoom technology.

Also, every quarter (in August, October, January, March and June), classes will meet in person at the ASU California Center on two consecutive Saturdays from 8 a.m. to 5 p.m. The combination of virtual and in-person learning will provide students the necessary freedom to complete coursework independently and builds the collaboration and communication skills needed to succeed in the global economy.

According to the Bureau of Labor Statistics, demand for data scientists is expected to grow 15% by the end of the decade, much faster than the average for all occupations. MS-BA students in Los Angeles will also gain the support of W. P. Carey Career Management and Employer Engagement. Upon graduation in 2020, MS-BA students were employed by Amazon.com, Avnet, Dell, Deloitte and Goldman Sachs, among others.

Applications for the MS-BA in LA are now being accepted. Visit wpcarey.asu.edu/msba-la to learn more.