A new speaker series from the School of Civic and Economic Thought and Leadership tackles critical questions facing the state of Arizona.

The Future of Arizona Democracy series kicks off April 12 with a discussion centered around the state’s citizen initiative process, which allows for Arizonans to place important issues on public ballots for passage. The inaugural discussion will include insight from John Leshy, professor at the University of California Hastings College of Law, Arizona Republic editorial columnist Robert Robb and Hon. Maria Baier of Great Hearts USA. The panel will be moderated by former U.S. Sen. Jon Kyl.

A new speaker series from the School of Civic and Economic Thought and Leadership tackles critical questions facing the state of Arizona. The Future of Arizona Democracy series kicks off April 12 with a discussion centered around the state’s citizen initiative process, which allows for Arizonans to place important issues on public ballots for passage. Download Full Image

“SCETL offers programs for the non-ASU public, as well as students, to learn more about our governments,” Kyl said. “The better we understand how our governments work, the more citizens can help direct policy.

“The Future of Arizona Democracy program will provide interesting and informational perspectives from experts on how we can direct our efforts to improve our society."

The new series, co-sponsored by the Arizona Chamber Foundation’s Junior Fellows program, will include at least one event per semester. While the first event will be held virtually, the school and the Arizona Chamber hope to bring members of the community together, and plan to host future events in person.

“We are excited to partner with the Arizona Chambers Junior Fellows to deliver these important conversations around Arizona’s democracy and the state’s future,” said school Director Paul Carrese. “Arizona is a rapidly growing state with a diverse economy and some unique political features. And the Chamber of Commerce is a pillar of civil society across America, with a demonstrated interest in civic education for Americans of all ages. These conversations represent an opportunity for new and old members of our community to learn more effective ways to participate in self-government the Arizona way.”

The Arizona Junior Fellows are university students working with the Arizona Chamber Foundation on research, analysis and communications issues. The Junior Fellows program was founded by Eileen Klein, president emeritus for the Arizona Board of Regents, who currently serves as the group’s adviser.

“With a new generation of leaders in charge and many new people moving to our state, it’s the perfect time to consider how we will continue to evolve our democracy to promote freedom and opportunity for all,” Klein said. “We hope to inspire an ongoing series that will consider our state’s political and civic framework. Ideally, it will remain a student-led production, so students can become more immersed in the rich history of our state and more engaged as residents and voters.”

Klein also pointed out that Arizona State University represents a perfect place to host this inaugural discussion on the ballot initiative procedure, as Arizona citizens voted to transform ASU from a college to a university utilizing the procedure in 1958.

Learn more about the event on April 12 and to register to attend.

“It’s not enough to complain about the government if we’re not willing to be involved,” Kyl said. “Programs like our discussion on April 12 will help show how we can all be a part of our governance.”

A partnership between Arizona State University and the Tempe Police Department has yielded a curriculum designed to help officers keep contacts with the public peaceful and productive — and a Team Award from the department acknowledging the important collaboration.Officers now benefit from the de-escalation curriculum developed by faculty and doctoral students from the School of Criminology and ...

A partnership between Arizona State University and the Tempe Police Department has yielded a curriculum designed to help officers keep contacts with the public peaceful and productive — and a Team Award from the department acknowledging the important collaboration.

Officers now benefit from the de-escalation curriculum developed by faculty and doctoral students from the School of Criminology and Criminal Justice, instructional designers from the Watts College of Public Service and Community Solutions and employees from the Tempe Police Department, said Tempe Police Commander Michael Horn. 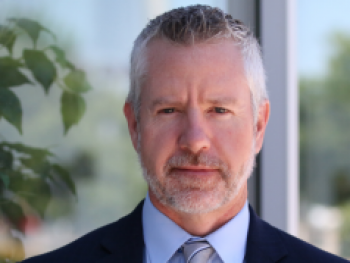 The wording of the award citation purposely identifies all the recipients, including the ASU team headed by Professor Michael White, as “employees,” Horn said, even though they work for the university.

“Dr. White and most of his team are not employees, yet we view him and his team as active partners and just as at home here behind the secured doors as other employees,” Horn said. “I’ve told many a person publicly: Dr. White and his team can walk around our buildings all the time. We trust him, his team and ultimately we genuinely want to be better and help the overall law enforcement community better serve. We are not afraid to learn and trust Dr. White to guide that process and find results, whether positive or identifying where we have to evolve.”

The citation reads: “Team Award (Ribbon and Certificate) – Presented to a group of Tempe Police Department employees whose collective efforts significantly impacted the overall service delivery for the Police Department.”

White, who is associate director of the ASU Center for Violence Prevention and Community Safety, said he is incredibly honored to be part of the award.

“I have conducted research with and for the police for the last 20-plus years, but this award recognizes the most innovative and collaborative project of my career,” White said. “Start to finish, this project reflects a true partnership between the Tempe Police Department and Arizona State University.”

Assistant Chief Mike Pooley, a co-leader of the de-escalation project, said White was amazing to work with.

“He and his team brought a methodological approach to this innovative de-escalation project grant. There was little if any academic research on de-escalation training in law enforcement and we wanted to change that. Dr. White’s experience, background, approach and credibility was deeply appreciated in this pursuit.”

Interim Chief of Police Jeff Glover said ASU, being “in our front yard,” is a great partner for the department.

“On this de-escalation grant, we had an ASU team provide us guidance on the curriculum development and instruction while Dr. White and his team drove the research component.  As a result, law enforcement collectively now has a research-based approach to de-escalation that shows incredible promise.”

The team worked with funding from a Smart Policing Initiative Grant from the U.S. Department of Justice.