Editor's note: This event has been canceled due to unforeseen circumstances. 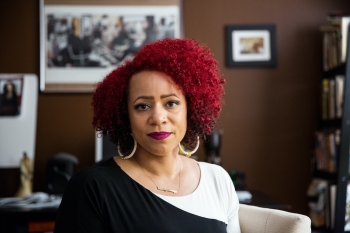 Award-winning journalist Nikole Hannah-Jones will be the featured speaker at the A. Wade Smith Memorial Lecture on Race Relations on April 20. Download Full Image

Nikole Hannah-Jones, a Pulitzer Prize-winning journalist and creator of the landmark 1619 Project, will be the featured speaker at Arizona State University’s 26th annual A. Wade Smith Memorial Lecture on Race Relations.

Hannah-Jones covers racial injustice for The New York Times Magazine and has spent years chronicling the way official policy has created and maintains racial segregation in housing and schools. She has written extensively on the history of racism, school resegregation and the disarray of hundreds of desegregation orders, as well as the decadeslong failure of the federal government to enforce the landmark 1968 Fair Housing Act.

The award-winning reporter — who has been honored with a MacArthur Genius Grant, a Peabody, a Polk and a National Magazine Award — will deliver her lecture at The College of Liberal Arts and Sciences’ virtual event at 3:30 p.m. Tuesday, April 20.

The A. Wade Smith Memorial Lecture on Race Relations was created in 1995 to perpetuate the work of a man who had devoted his life to the idea of racial parity. As professor and chair of sociology at Arizona State University, A. Wade Smith worked tirelessly to improve race relations on the ASU campus and within the greater community. When he died of cancer at the age of 43, his wife, family members and friends made memorial gifts to establish and fund this lecture series.

“Last fall, Arizona State University President Michael Crow committed the university to increase the support of The College’s annual A. Wade Smith Lecture series,” said Patrick Kenney, dean of The College. “For more than two decades, this featured event has welcomed a distinguished guest to our ASU community to discuss important issues of race and society. We are grateful for the additional support and the opportunity to welcome Nikole Hannah-Jones as this year’s featured speaker.”

Where: Online. Register for the virtual event here.

The event is free and open to the public. ASU travels to Utah and Colorado on April 9-11.