To cap off its first year as a hub for human rights scholars at Arizona State University, the Global Human Rights Hub will host a virtual global conference, "Human Rights on the Edge: The Future of International Human Rights Law and Practice" April 29–30.

Housed in the School of Social and Behavioral Sciences on ASU’s West campus, the Global Human Rights Hub was awarded a National Science Foundation conference grant in August 2020 from the NSF’s Law and Science section to hold this event. The Global Human Rights Hub convenes for the 2019 Visioning event, part one of the two-part conference series "Human Rights on the Edge." Download Full Image

The virtual conference will convene 40 human rights scholars from around the world to address a new set of challenges that threaten the future of international human rights law. These challenges include the resurgence of populist governments in both the global north and south, forcing scholars to rethink the past and future of this legal regime.

Liberal democracies from the United States to India are clamping down on the rights of non-citizens, Indigenous, and minoritized people, rolling back rights for women, girls and LGBTQ people, and instituting policies at odds with both the spirit and the letter of international human rights law. Escalating demands for economic justice and political reform pervade wealthy industrialized nations as well as developing ones, and authoritarian regimes are as likely as liberal democracies to invoke human rights claims. Many Western scholars are increasingly pessimistic about the future of international human rights law, suggesting that its shaky foundations make it a poor mechanism for the promotion of rights or that it is simply ineffective in improving human rights practices.

Yet, despite this pervasive cynicism about the role of governments and the United Nations in protecting and promoting human rights, mass movements and civil society organizations that stake demands in the language and law of human rights proliferate globally. Subnational governments, nongovernmental actors and ordinary citizens have also taken up human rights frameworks and action when the national level of government has fallen short.

ASU’s Global Human Rights Hub is committed to mentoring and nurturing the next generation of interdisciplinary human rights scholars. The upcoming NSF conference includes established and junior scholars from political science, sociology, criminology, law and anthropology. Graduate students, postdoctoral scholars and assistant faculty will serve as chairs and discussants, giving them the opportunity to critique the work of their senior colleagues.  A mentoring panel will conclude the conference events, featuring distinguished human rights faculty who will reflect on their work and answer questions from junior colleagues.

At the core of the hub’s programming for the ASU community are four thematic working groups in the areas of gender, international law, migration and trafficking. The groups are composed of ASU faculty, graduate students and postdoctoral scholars. The working groups meet virtually a few times each semester and provide a forum for members to workshop their work in progress and collaborate on grants. The working groups are run by pairs of junior and senior scholars, who also make up the hub executive committee.

For more information on the working group meetings visit the hub website.

Beyond the working groups, the hub executive committee initiated the Hub Graduate Fellows Program, a competitive process that invites applications from graduate students in any discipline on any ASU campus whose work touches on human rights. This year, five fellows were selected from across ASU. Fellows are paired with a faculty mentor from the executive committee and meet regularly with each other and hub faculty to workshop blog posts that they write based on their human rights research.

Fellows are also invited to join working groups and take part in talks and other hub events. Visit the Hub Graduate Fellows blog.

In its first year, the hub has become a lively virtual space for those that are passionate about human rights and social justice. In addition to the working group meetings, conferences and graduate fellows program, the hub has also sponsored and co-sponsored talks from Sarah Holewinski, the Washington director at Human Rights Watch, David Scheffer, former ambassador-at-large for war crimes and others. The Global Human Rights Hub is committed to creating a space for those engaged in human rights research to network, collaborate and nurture emerging human rights scholars.

For more than 25 years, award-winning political cartoonist Lalo Alcaraz has advocated for Latino and immigrant rights through his work. Now, he is bringing his passion for these issues to Arizona State University’s School of Transborder Studies to serve as the school’s first-ever virtual artist in residence.“We are very excited to welcome Lalo to ASU, The College and our school,” said Iras...

For more than 25 years, award-winning political cartoonist Lalo Alcaraz has advocated for Latino and immigrant rights through his work. Now, he is bringing his passion for these issues to Arizona State University’s School of Transborder Studies to serve as the school’s first-ever virtual artist in residence.

“We are very excited to welcome Lalo to ASU, The College and our school,” said Irasema Coronado, director and professor of the School of Transborder Studies. “His background and years of advocacy for the Latino and immigrant communities are an indication of his transboundary connections. We welcome his contributions to our interdisciplinary work and are eager to promote the arts in the process.” 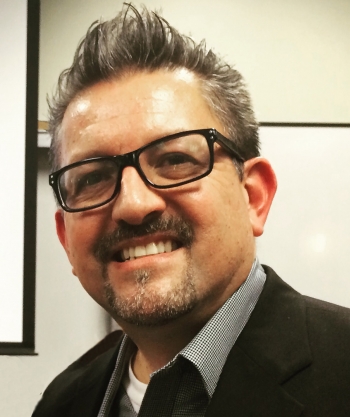 In this role, Alcaraz will take on a variety of projects in collaboration with school faculty and give lectures on his work and other topics of relevance. One of the first projects he’ll tackle is a strategic campaign to dispel misinformation around COVID-19 and the vaccine in Latino communities in partnership with Gilberto Lopez, assistant professor in the School of Transborder Studies.

Alcaraz will develop a series of illustrations to bring culturally relevant information on the COVID-19 vaccine to California’s agricultural Central Valley and beyond. These efforts will contribute to an ongoing project that Lopez has been working on since the beginning of the COVID-19 pandemic.

On April 20, Lalo will give a lecture titled “Cartoons That Cross The Line,” where he’ll share some of the editorial cartoons he’s done over the course of his career on immigration and the Mexican-American border.

Alcaraz said he was drawn to the School of Transborder Studies because the topics taught within the school align with his work and background. Growing up in San Diego, California, to Mexican immigrant parents, he was close in proximity to the Mexican-American border.

“I always write and create about the border,” Alcaraz said. “I'm from the border and it's just always with me. So naturally I was fascinated by the School of Transborder Studies. The work they do is right up my alley ... so collaborating with them really seemed like a perfect match.”

Throughout his career his work has extended beyond comic strips to television and film writing, consulting and producing. He has contributed as a writer and cultural consultant on several well-known movies and TV shows including the animated TV show “Bordertown” and Disney’s Oscar-winning Pixar movie “Coco.”

He is currently the cultural consultant, consulting producer and writer on the Nickelodeon animated series “The Loud House” and “The Casagrandes.” Alcaraz is also the co-host of the satirical radio talk show, the Pocho Hour of Power on KPFK 90.7 FM in Los Angeles.

Today, Alcaraz resides in Los Angeles with his family — where he will work remotely during his virtual artist residency through fall 2021.