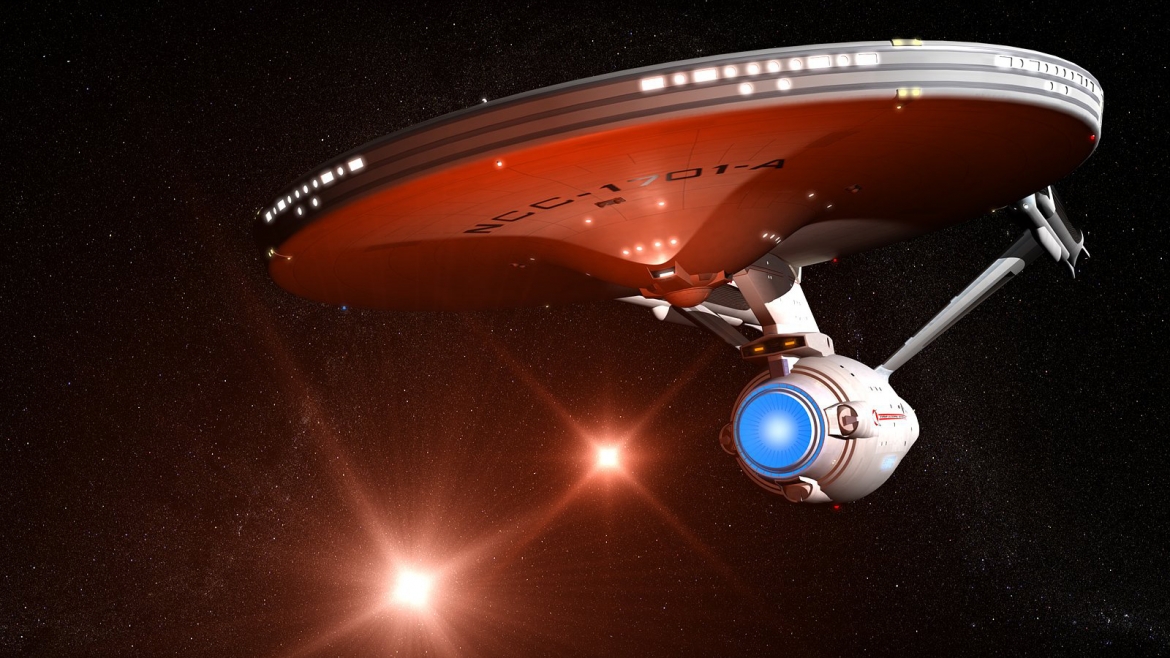 Back in the 1970s, Dave Williams came home from school every day, parked himself in front of the TV, and watched "Star Trek" reruns five days a week. On Saturday mornings he watched the animated series.

Now Williams is a planetary geologist at Arizona State University. He explores strange new worlds, seeks out new life and new civilizations, and boldly goes where no one has gone before. He has worked on a Venus mission, a lunar mission, an outer planets mission, a Mars mission, an asteroid mission and a dwarf planet mission.

"Star Trek" is “what really led me to my career,” Williams said.

With that genesis in mind, Williams will be teaching a class this fall titled “Star Trek and Humanity’s Future in Space.”

The class will be centered around the question, “How can we create or improve the human future in space, informed by the 'Star Trek' media franchise?”

Williams will use ideas from the "Star Trek" universe of TV shows, movies and books combined with peer-reviewed research materials to explore problems related to humanity’s future living and working in space.

Sample topics may include leadership; life in a postscarcity economy; the role of meritocracy in human achievement; life on spaceships, space stations and colonies; how science and engineering foster deep space exploration; new technologies for power, propulsion, food production and medicine to enable human survival on alien worlds; war, peace and international relations among spacefaring countries; and other topics. (And there may be tribbles.)

“'Star Trek' is just going to be an inspiration and aspiration, something to trigger people's imaginations to ask questions and do research,” Williams said. “For example, suppose somebody who was interested in astrobiology — life in the universe — watches an episode of 'Star Trek' like 'The Devil in the Dark' from the original series where they have a silicon-based life form — the Horta — that would inspire them to go online to Google scholar and look up what scientific articles have been published about the possibilities of silicon-based life. And I actually know that there have been peer-reviewed, published papers on that whole subject. So that would be the 'Star Trek' part of it: watching an episode.”

Equally important is what the class is not. It’s not a media analysis class, or a trivia competition (if it was, good luck beating the instructor). Full episodes will not be screened during class. That will be part of the homework. It’s a science class intended to focus on problems, solutions and questions relevant to real life in humanity’s future in space.

Williams is not the only person working in space who was inspired by "Star Trek." NASA astronauts have appeared in episodes. A few of the engineers in the School of Earth and Space Exploration were galvanized by the series.

“The connection between 'Star Trek' and the space program and its inspiration, particularly to planetary science, is quite broad,” Williams said. “When I came to ASU, most of the planetary geology folks were 'Star Trek' fans.”

Sign up information is below. Wearing a red shirt to class will not alter chances of successful completion. And never forget the immortal words of Spock: "Logic is the beginning of wisdom, not the end."

The class is offered by the Interplanetary Initiative, a panuniversity effort paving the way for humanity in space.

The four classes described below all meet together. Graduate students, register for SES 598.

Note that the titles in the registration system are not yet updated — see specific course numbers below.

Students in Advanced Inquiry will conceive of and execute a related independent project.

Arizona State University's Thunderbird School of Global Management announced that Greg Autry is joining the faculty as clinical professor of space leadership, policy and business.Autry will be developing and delivering Thunderbird programs and courses in space entrepreneurship, leadership, business and policy, including an entirely new master’s degree in Los Angeles to be launched in January 202...

Autry will be developing and delivering Thunderbird programs and courses in space entrepreneurship, leadership, business and policy, including an entirely new master’s degree in Los Angeles to be launched in January 2022 on Global Technological Leadership. Autry will also teach Thunderbird Executive Education courses for professionals earning certificates. He will be working closely with Professor Lindy Elkins-Tanton, managing director of the ASU Interplanetary Initiative, and Professor Jim Bell, director of ASU NewSpace Initiative, to develop a cross-disciplinary Institute of Space Leadership and Management. Professor Greg Autry served on the NASA Agency Review Team and as the White House liaison at NASA, and he was nominated last year to serve as the space agency’s chief financial officer. Download Full Image

“I am extremely pleased to be joining Thunderbird and Arizona State University,” Autry said. “ASU’s visionary leadership in space exploration and development combined with Dean Khagram’s focus on global innovation at Thunderbird offers the perfect fit for my teaching and research agenda. There is nothing I would rather be doing than teaching space entrepreneurship, leadership and policy in a school with the top-ranked master’s in management program at America’s most innovative university. I’m particularly excited that with the new LA campus opening, I will be working within the commercial space hub of Southern California. The possibilities for students, industry and humanity are boundless."

“Outer space offers virtually unlimited opportunities in this 4th Industrial Revolution. As the space sector grows exponentially, private companies and governments will create immense demand for future-ready entrepreneurs, investors, executives and managers. Greg’s expertise and experience as an innovator and leader in both the business and policy sides of outer space enterprises will position our graduates for leadership roles at the frontiers of human exploration and discovery,” Khagram continued. “Greg will turbo-charge our quest to become the Thunderbird Academy of Intergalactic Leadership with our partners at ASU’s Interplanetary Initiative and NewSpace in the years to come!”

“Humans are going to explore space both in person and using robots, and how we do it really matters — here we have a chance to connect with and influence space expansion to be more equitable and inclusive as well as more effective and sustainable,” Elkins-Tanton said. “Doing exploration right is a big goal, and Greg’s expertise in industry and government make him a key expert to help us bring this ecosystem together.”

Autry was an assistant clinical professor of entrepreneurship with the Lloyd Greif Center at the University of Southern California from 2013 to 2020. He taught entrepreneurship, strategy and macroeconomics at the University of California, Irvine, between 2002 and 2014. Autry also teaches space entrepreneurship at the Kennedy Space Center as part of a graduate certificate program in commercial space from International Space University and the Florida Institute of Technology. His research has focused on the government’s role in the emergence of new industries, and he has researched within the booming commercial space industry since 2003.

"Greg Autry is a noted scholar of commercial space enterprise with practical knowledge of both politics and business. He's a terrific addition to Thunderbird School of Global Management at ASU," said Scott Pace, director of the Space Policy Institute and former executive secretary of the National Space Council.

Autry’s extensive experience in space policy includes serving on the 2016 NASA agency review team to establish the moon program’s current return. Autry served as NASA White House liaison in early 2017, and last year, the president nominated him to serve as the space agency’s chief financial officer. By appointment of the secretary of transportation, he currently serves as chair of the Safety Working Group in the Commercial Space Transportation Advisory Committee at FAA. Autry has been a notable advocate for space exploration and development. Currently, he serves as vice president of the National Space Society and the Beyond Earth Institute, nonprofit organizations dedicated to extending humanity’s presence into our solar system.

Autry holds a BA in history from California Polytechnic University at Pomona and an MBA and PhD from the Merage School of Business at the University of California, Irvine.

“Greg’s long experience with the space industry and governmental experience combine to give him the ideal background to teach space executives and liaison to the space industry,” said David Radzanowski, who served as chief of staff and chief financial officer at NASA during the Obama administration.