Arizona State University's Thunderbird School of Global Management is celebrating 75 years of educating and influencing leaders, executives, entrepreneurs and professionals from the bottom to the top of the pyramid who work across borders and sectors to build inclusive and sustainable prosperity around the world.

On April 8, Thunderbird’s worldwide community is marking its inception with a digital, 24-hour Founders’ Day celebration that launches a series of online and in-person events culminating in the Grand Opening of Thunderbird Global Headquarters Nov. 4–7, 2021. 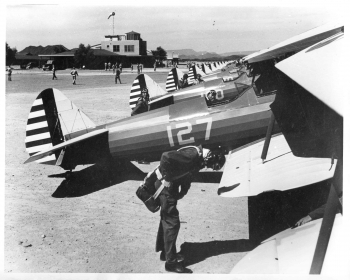 Planes lined up on the original Thunderbird Airfield, which General Barton Kyle Yount purchased for $1 with the commitment that it be used for educational purposes in the following 10 years. Download Full Image

“Sentiments of nationalism and anti-globalism are rampant around the world, even as the interconnectedness of the world continues to accelerate,” said Thunderbird Dean and Director General Sanjeev Khagram. “As we celebrate our 75th anniversary, Thunderbird 4.0 at ASU is strategically positioned to face these challenges head-on, working to ensure that 2021 is the start of an unparalleled decade of action, renewal, and global transformation — to achieve the U.N. Global Sustainable Development Goals and much more, for prosperity, people and planet. To this end, we have reinvented the school as the most digital and global leadership, management and business academy working across the private, public, and nonprofit sectors worldwide focused on the fourth Industrial Revolution for the AnthropoceneThe new geologic era of human modification of the natural world..”

Founder’s Day will launch Thunderbird’s 75th anniversary festivities in typical T-bird fashion — with a 24-hour, around-the-world celebration. Through the latest technology, alumni, students, faculty, staff and friends will convene for a series of interactive presentations, discussions and virtual networking events designed to bring T-birds all over the globe together as never before. They will celebrate the school’s last 75 years and reimagine it for the next 75 — toward the “Thunderbird Academy of Intergalactic Leadership.”

Participants can connect with the school’s now 14 and soon to be 25-plus regional centers of excellence to discuss timely global topics like “Africa’s Path to Globalization” and “What’s Next for Brexit?” or hear from our newest faculty in the Masrin Center for Global Entrepreneurship and Family Business on “The Top 10 Technologies Your Grandparents Don’t Know About That Will Kill Your Family Business.”

New sessions and events will be held every hour throughout the day. Everyone is welcome to join any live session on Founders’ Day when Thunderbird honors its history and progress while celebrating its present and creating the vision for its future as part of the most innovative university in the U.S. 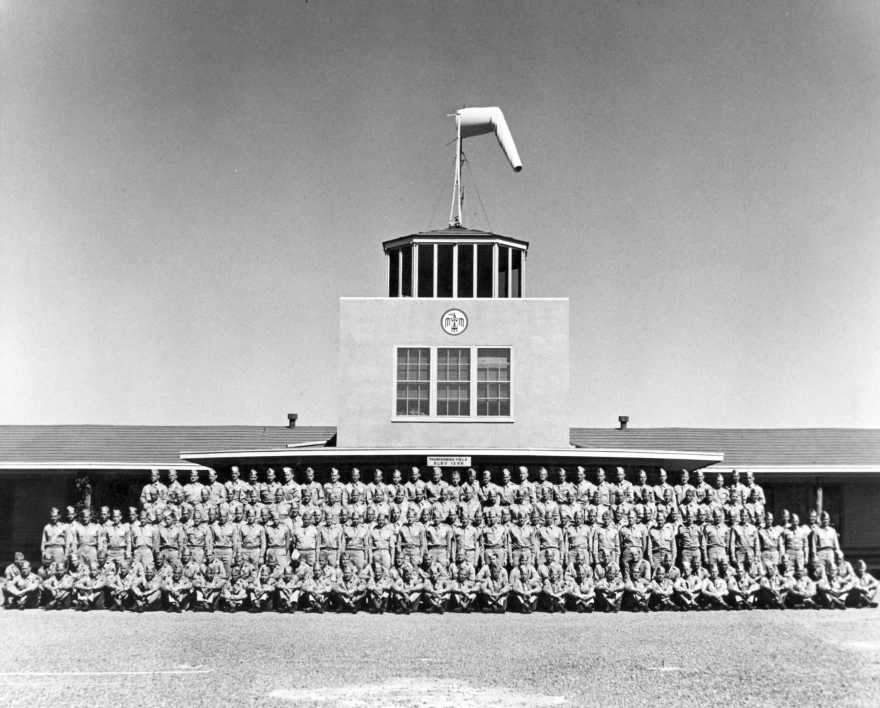 A cohort of graduates from the American Institute for Foreign Trade. 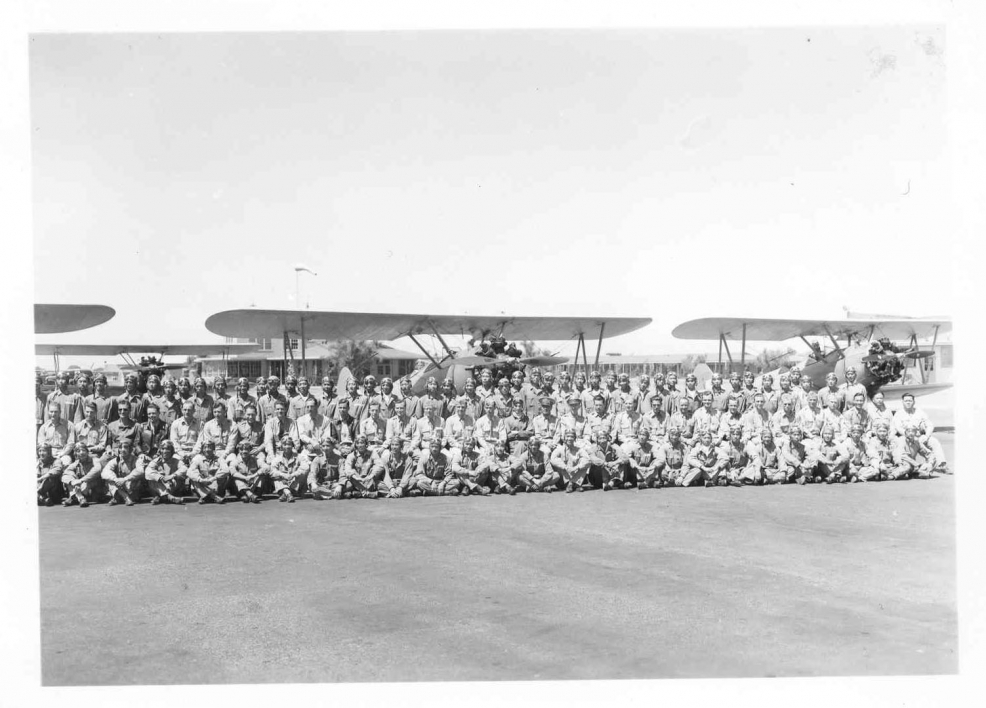 During WWII, pilots came from around the world to train at Thunderbird Field. For 75 years, students have come from all over the world to study at Thunderbird.

The quintessentially Thunderbird idea of bringing peace to the world through international commerce has evolved over the last seven and a half decades as globalization intensified and sped up. Thunderbird was established less than a year after the United Nations formed. The school’s founders recognized a need for adaptable mindsets in professionals who could go global, and their innovative solution culminated as Thunderbird. On April 8, 1946, Thunderbird School of Global Management, originally known as the American Institute for Foreign Trade, was chartered on the Glendale, Arizona, World War II air base Thunderbird Field, where pilots from around the world came for training during wartime.

Since that time, the world has also evolved dramatically through several distinct eras, such as decolonization and the emergence of new nation-states. “When Thunderbird was founded, most of the peoples of the world were under colonial rule, including my family,” Khagram said. “The school grew and rose to prominence through the Cold War’s early years, through the formation of the New International Economic Order, to the end of the Cold War and Globalization 3.0 in the 1990s. Global management education continued to change rapidly after 9/11, facing major disruption again with the global financial crisis of 2008–09, and Thunderbird changed with it."

In 2015, Thunderbird became part of ASU, and in 2018 it relocated from Glendale to ASU’s Downtown Phoenix campus, where its new high-tech global headquarters is in the final phases of construction, on track to welcome its first students in August 2021.

Thunderbird’s 75th anniversary celebrations will honor that rich history while convening a global community of difference-makers to tackle the toughest challenges of tomorrow. In its 75th year, the school’s international community finds itself once again adapting at the vanguard of the higher education sector, not only to accelerating technological advancement but also to climate change and ecosystem destruction, COVID-19 and new demands for social justice.

Thunderbird has often been referred to as a “mini United Nations” because of its diverse and inclusive global faculty, student body, staff and alumni, and therein lies one of its greatest strengths. From Founders’ Day on April 8 to the grand opening of Thunderbird Global Headquarters in November, this longstanding tradition of honoring diversity and fostering cross-cultural connections will be on display, exemplifying the ASU Charter’s focus on inclusion.

Visit the Thunderbird Founders’ Day registration page to sign up or learn more.

Editor's note: This story is being highlighted in ASU Now's year in review. Read more top stories from 2019.The Thunderbird School of Global Management broke ground on its new headquarters in downtown Phoenix on Monday with a renewed commitment to globalism.The international management school will move into its new building on the Downtown Phoenix campus of Arizona State University in April 2021...

Thunderbird at 70: Rebirth and rediscovery 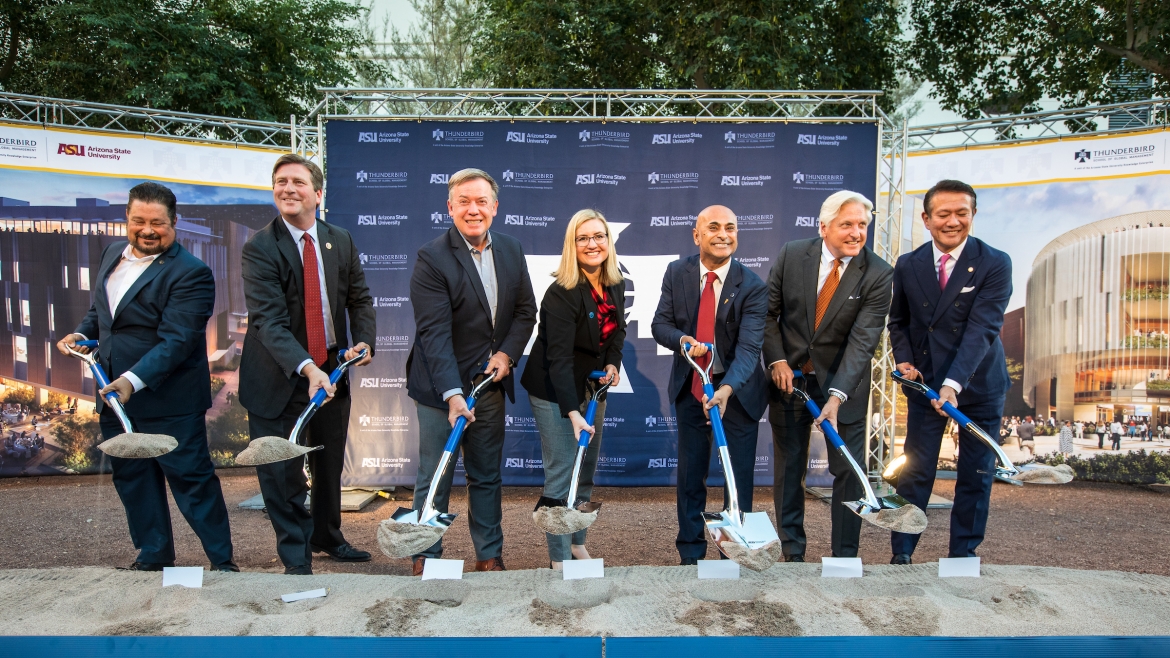 The Thunderbird School of Global Management broke ground on its new headquarters in downtown Phoenix on Monday with a renewed commitment to globalism.

The international management school will move into its new building on the Downtown Phoenix campus of Arizona State University in April 2021 — its 75th anniversary. The school started after World War II as a training program for international businesspeople, and its motto was coined by a faculty member: “Borders frequented by trade seldom need soldiers.”

Sanjeev Khagram, the dean and director general of Thunderbird, reiterated that sentiment during the groundbreaking ceremony.

“That remains the principle we abide by to this day,” said Khagram, an international scholar who lived in a refugee camp with his family before immigrating to the United States.

“Around the world, the forces of nationalism and parochialism are on the rise. We always have to be thoughtful, we have to do the research, we have to be creative, and we are committed to being a champion for globalism.”

The new headquarters, at First and Polk streets, is next to the Beus Center for Law and Society, home of the Sandra Day O’Connor College of Law at ASU. The five-story building will include large gathering spaces, classrooms, a video studio and, on the roof, the pub — an icon from the school’s early days. 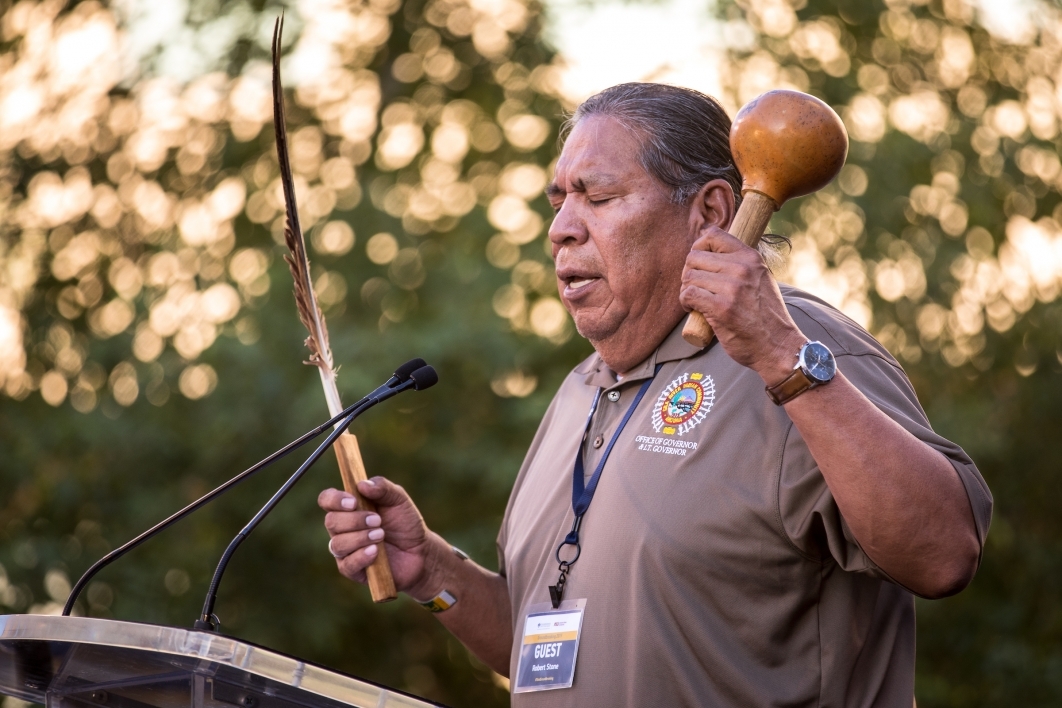 Gila River Indian Community Lt. Gov. Robert Stone offers a Native American prayer and blessings at the groundbreaking of the new downtown Phoenix home of the Thunderbird School of Global Management on Oct. 7, 2019. 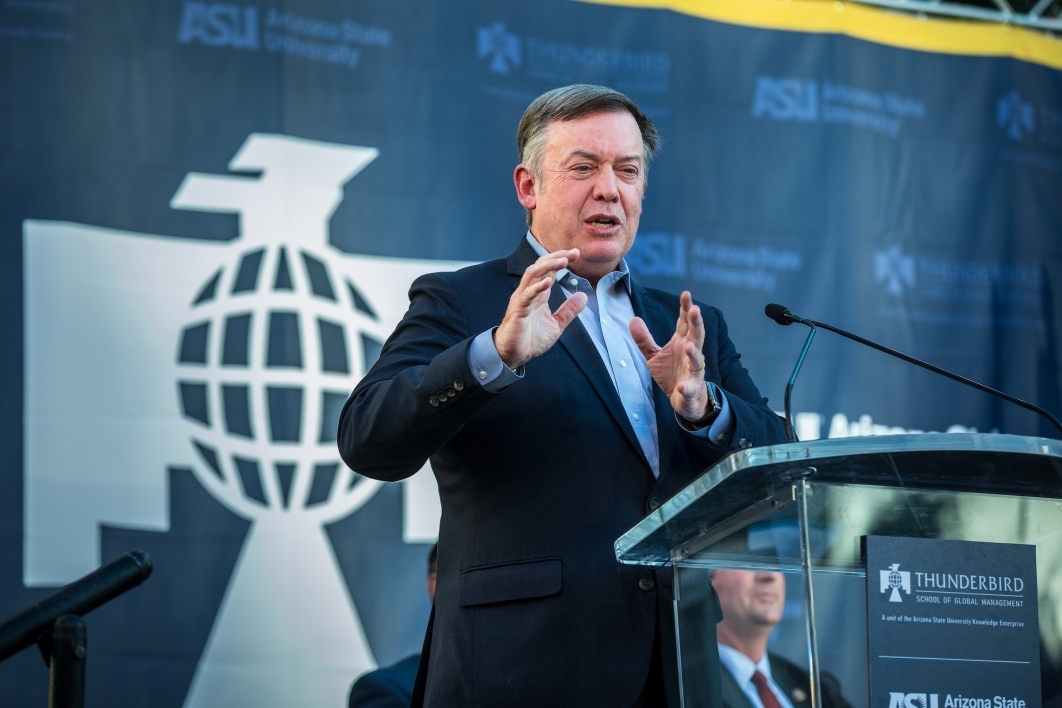 ASU President Michael Crow speaks at the Thunderbird groundbreaking event. The school, with 45,000 alumni in 140 countries, is planning for the new home to open in April 2021, in time for its 75th anniversary. 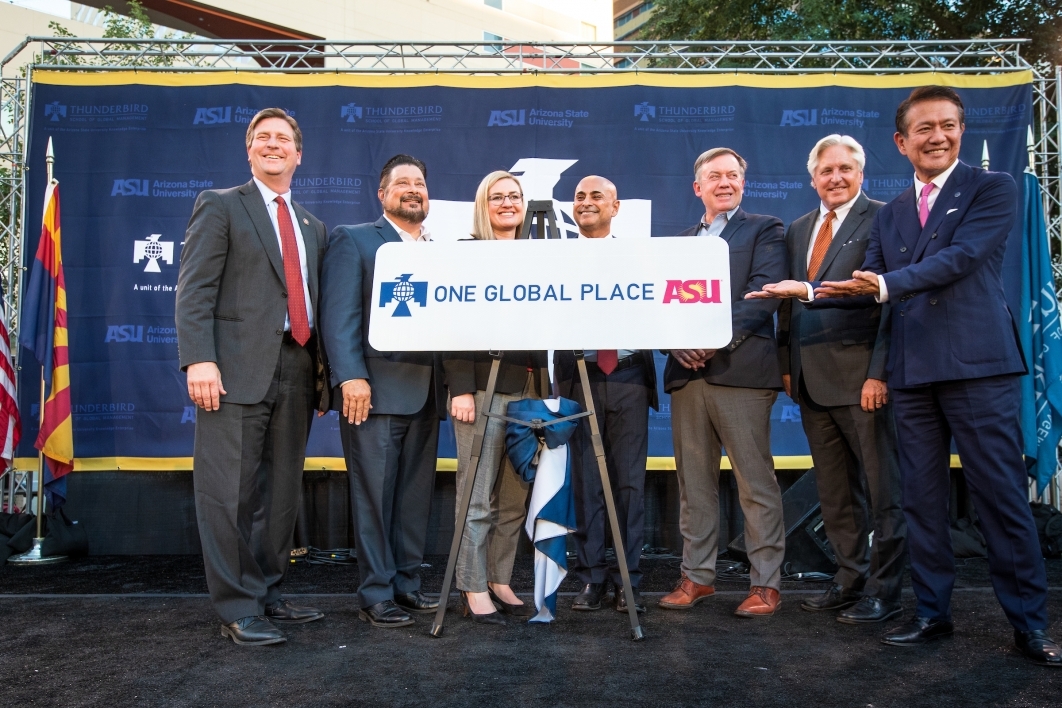 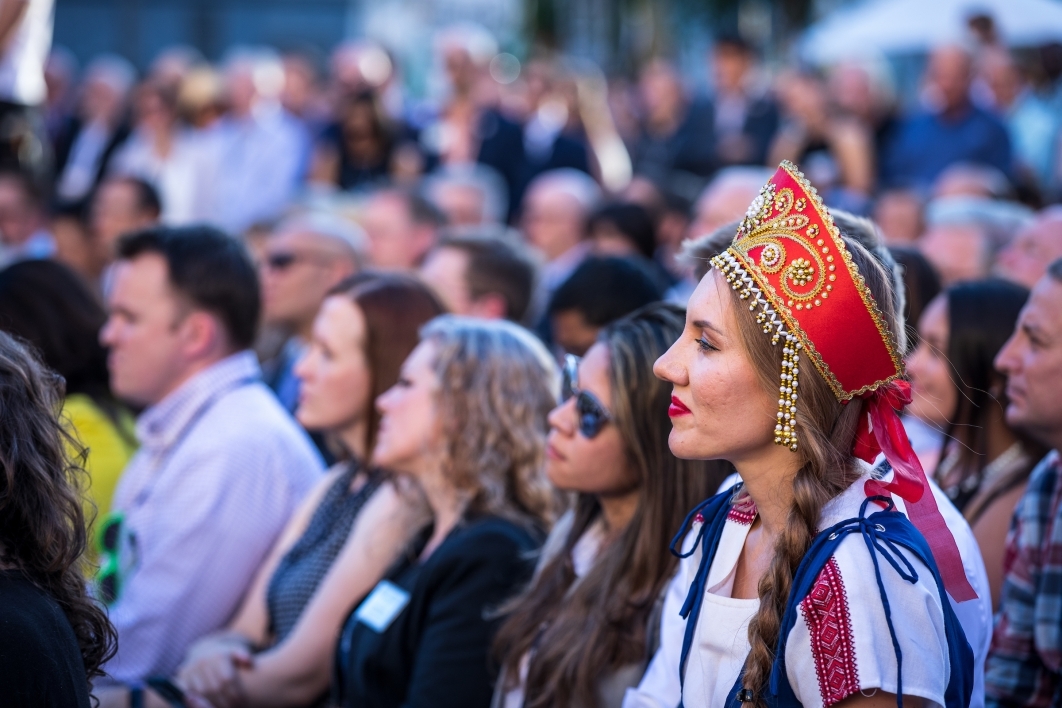 Among the 600 guests at the groundbreaking event was second-year Master of Global Management student Lina Safronova, of Russia, dressed in her community's traditional attire.

This will be the third home for the school, which started in 1946 at a dusty site in Glendale that had been used to train pilots during the war. The students lived in old barracks. Thunderbird grew from a small trade school to a bustling center of graduate education that drew thousands of students from around the world. In the 1960s, students’ wives were offered classes to help them adapt to the countries where their husbands would be employed. They earned a “wives’ certificate.”

By the late 1990s, enrollment began to decline, leading to financial upheaval.

ASU President Michael Crow told the crowd at the groundbreaking ceremony that from the time he arrived in 2002, he wanted to partner with Thunderbird, then a struggling but still prestigious private institution.

“I said, 'We have to find a way to work with these people.' Thunderbird is a leadership academy. It’s a place that takes people interested in how to make the world a better place and brings them together with like-minded individuals,” he said.

In 2014, Thunderbird officially became part of ASU, and in 2018 moved from the sprawling Glendale campus to temporary quarters in downtown Phoenix.

Crow said the merger and the new Thunderbird site is a “tripling down” on the pledge to ensure the continued development of the global economy and the movement of people out of poverty.

“The only way we can help to ensure that is to make sure the Thunderbird School of Global Management is not only what it’s been in the past, but bigger, better and stronger and more impactful than it’s ever been.”

The new building is also evidence of ASU’s continued partnership with the city of Phoenix, Crow said. The city pledged $13.5 million toward the school.

“You’re sitting in what is an emergent hub of intellectual and creative energy right here in central Phoenix, which is unparalleled,” he said.

Phoenix Mayor Kate Gallego said that Thunderbird is a good fit for downtown.

“Phoenix recognizes that global trade is the future,” she said. “We are a large city in a border state, and what happens in the global market truly affects us here in the Valley.”

Khagram said that Thunderbird’s passionate base of 45,000 alumni in 140 countries is its greatest asset.

Hiroshi Hamada, CEO of the ARUHI Corp. in Tokyo, is a 1991 graduate of Thunderbird, and the chairman of the Thunderbird Leadership Council alumni group. He told the crowd that he still has good memories of the old campus in Glendale.

"However, the excitement I have about the new headquarters is big enough to blow away my sentimental memories,” he said.