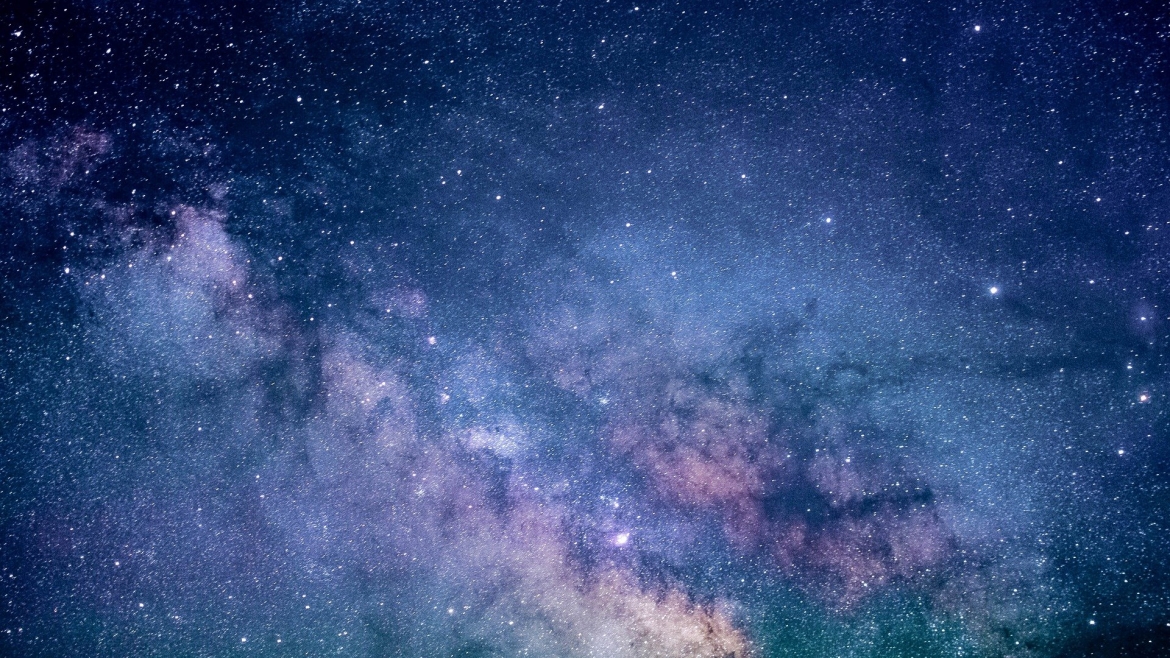 On Feb. 18, the Perseverance rover landed on Mars to search for signs of ancient life and collect samples to return to Earth. The same month, Elon Musk’s SpaceX announced plans for the world’s first all-civilian mission to space. We are in a revolutionary era of space exploration, and humans are becoming an interplanetary species. As we continue to push the boundaries of space exploration, we must also contend with new sets of questions, challenges and opportunities that come with our ever-expanding reach. How can we effectively explore and share the exciting challenges of designing positive space futures?

A new podcast from Arizona State University’s Interplanetary Initiative and Slate, "Mission: Interplanetary," looks at those big questions and ponders the glimpses into the future that lie beyond the bounds of Earth. ASU’s Global Explorer in Residence Cady Coleman, a scientist, former United States Air Force colonel and retired NASA astronaut, hosts "Mission: Interplanetary" with Andrew Maynard, ASU’s associate dean of curricula and student success in the College of Global Futures. Together, Maynard and Coleman talk with innovators and thought-leaders and explore new ways of thinking and talking about the future of humanity as a spacefaring species.

“We’re interested in exploring the universe, and there’s really interesting people doing that,” said Coleman at the podcast’s launch event. “Something we made clear to our guests is that we are here to talk about what you want to talk about. Because there are some really big questions about exploring the universe, about what it means to be an interplanetary species.” 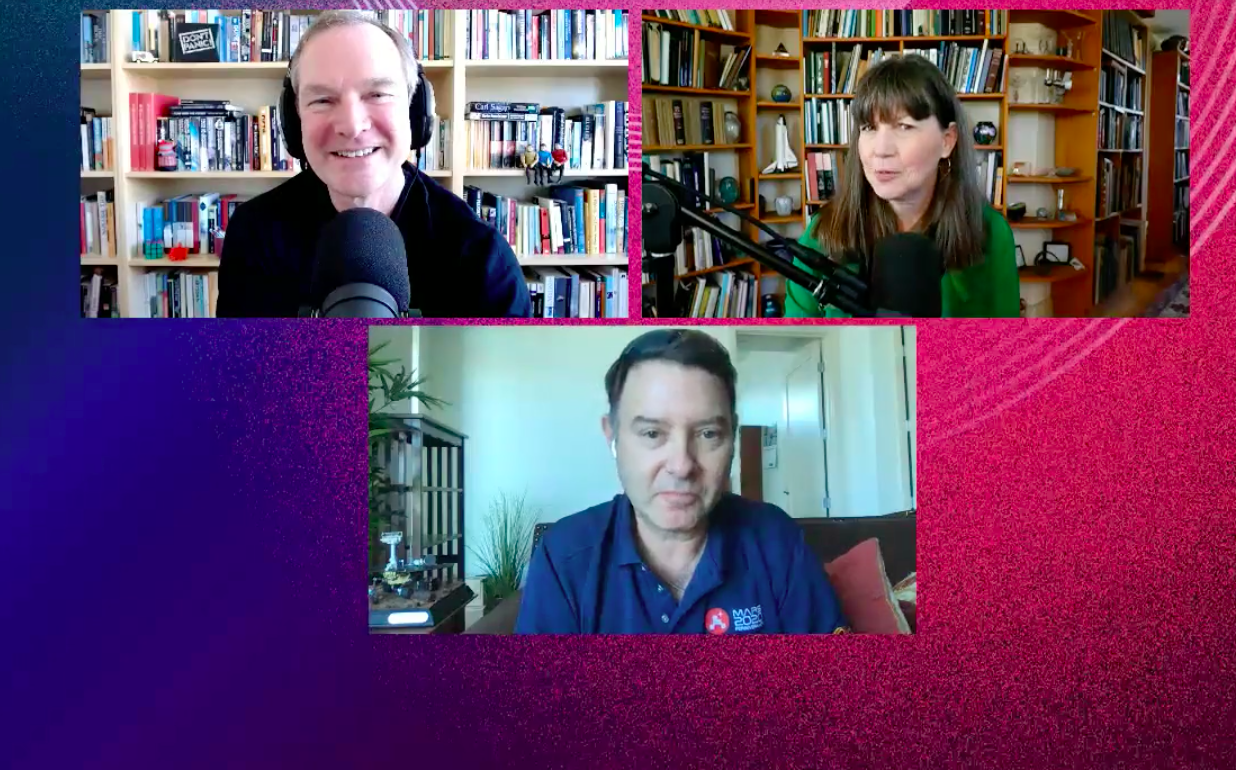 The podcast began its exploration of space with special guest Jim Bell, a professor in ASU's School of Earth and Space Exploration. Bell joined the new podcast hosts to discuss his role as principal investigator on Mastcam-Z, the stereoscopic imaging instrument on the latest Mars rover, Perseverance.

For Bell, Mastcam-Z and Perseverance are bringing humanity that much closer to an interplanetary existence.

“We don’t want to just experience the place remotely, viscerally, through this robotic avatar and see Mars that way. We actually want to see Mars ourselves, because we are going to bring these samples back to Earth,” Bell said. “There’s been 47 missions sent to Mars before Perseverance since 1960. None of them have been designed to bring anything back. This is the first, and that’s why this is different. We’re collecting those samples.”

“Science is often presented as this very sterile thing,” said Harrison. “It’s just facts and you don’t really get to see the people behind it. You don’t get to see how much we care about everything we do, and how much of ourselves we pour into this. I think it’s very similar to what you see with artists that create art. I want people to see that scientists are also humans and we have emotion, and we love this stuff so much. I want people to be a part of that.”

The podcast has already planned a long list of future guests to discuss big questions around the future of space. Co-hosts Coleman and Maynard are most excited about combining their different perspectives about imagining, designing and building the future of humans in space.

“Talking to people who are looking into the future and seeing what future space travel will look like,” Coleman said. “I feel like I’m the bridge to talk a little bit of the reality of now. Because they’re looking further, it’s nice to have that anchor. Then Andrew looks at it from a completely different point of view, with very accurate physics.”

“What is really cool, at least for me, is I get to hang out with a real astronaut,” Maynard said. “Cady’s done things I couldn’t even dream of.”

"Mission: Interplanetary’s" first episode aired on March 23 with ASU Professor Lindy Elkins-Tanton, the principal investigator of NASA’s Psyche mission. Tanton discussed asteroid 16 Psyche, a unique metal world that may hold secrets to the history of our own planet.

Is there anything more experimental than a seed?Planting something in the ground and seeing what grows there?The practice of experimentation with a focus on native plants is helping to grow the daily give-and-take activities of the seed library at Arizona State University, situated in the Salt River Valley on the homelands of Indigenous peoples.Tending to a repurposed card catalog of edible plant ...

Is there anything more experimental than a seed?

Planting something in the ground and seeing what grows there? 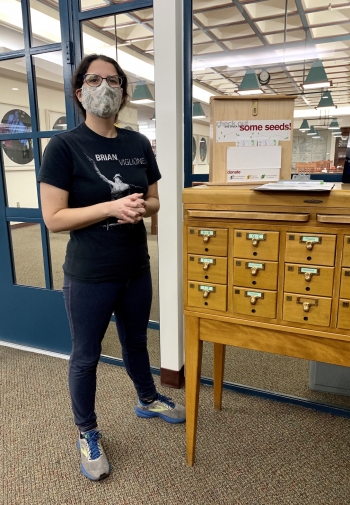 Christina Sullivan, a library specialist, manages the seed library in the Design and Arts Library on the Tempe campus. Photo by Marina Ioffe Download Full Image

The practice of experimentation with a focus on native plants is helping to grow the daily give-and-take activities of the seed library at Arizona State University, situated in the Salt River Valley on the homelands of Indigenous peoples.

Tending to a repurposed card catalog of edible plant and herb seeds, curated specially for the Arizona climate, is the work of Christina Sullivan, a library specialist who manages the seed library in addition to NatureMaker, a joint collection of the ASU Library and the Biomimicry Center. Both are housed in the Design and Arts Library on the Tempe campus.

Sullivan’s role keeps her attuned to the seasons and cycles of what grows here.

“Seeds are inexpensive and give people an opportunity to experiment with their gardens — seeing what works and what doesn’t,” she said. “The seed library is really good at teaching people about what can grow in Arizona, specifically.”

For example, there’s a difference between drought-resistant plants, such as aloe, and native plants belonging to our Sonoran Desert ecosystem, which is home to the ocotillo, the brittlebush and the saguaro cactus.

“The Sonoran Desert is pretty diverse and specialized,” said Sullivan, who has grown up in Arizona observing desert diversity on hiking trails, state highways and in her own backyard. “A saguaro cactus only grows in the Sonoran Desert, so there are rules and regulations for how to care for that cactus or how to remove it. Right now, we have people coming in from other places not knowing about this place and they begin remodeling old houses that come with native plants. Sometimes they end up cutting down a saguaro because they either don’t want to go through the trouble or there’s not an understanding that the saguaros are protected.” 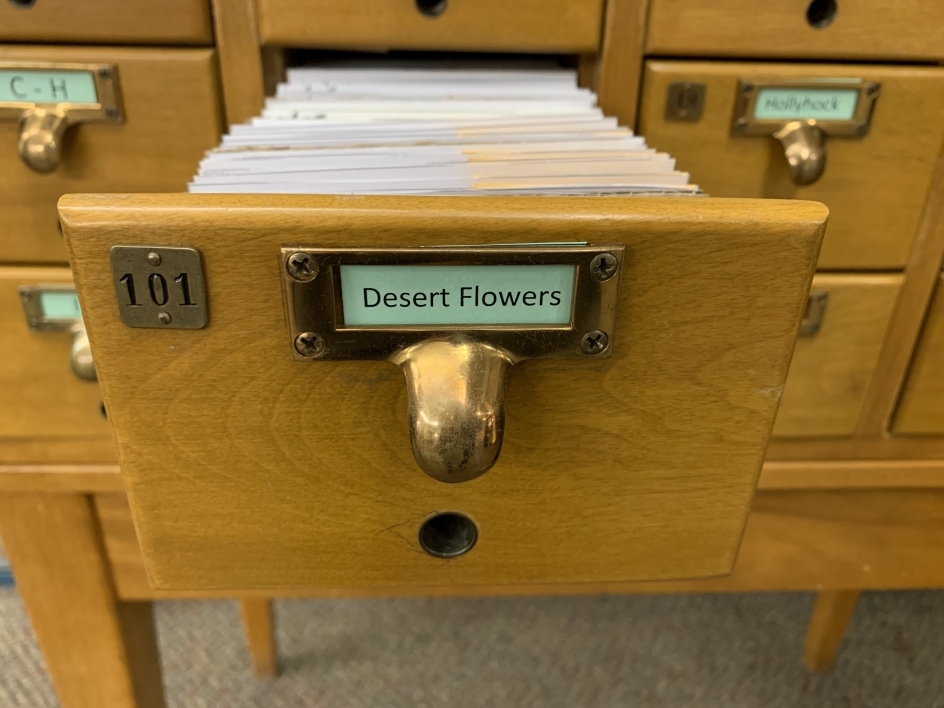 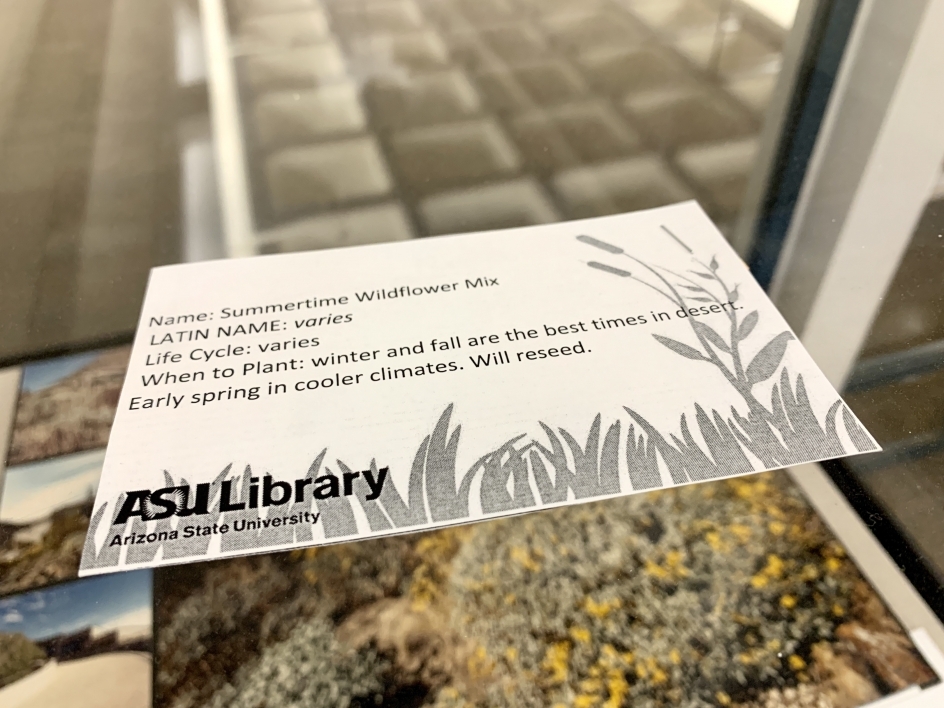 A limited amount of seeds from nonedible plants may be available in the seed library, such as wildflowers. 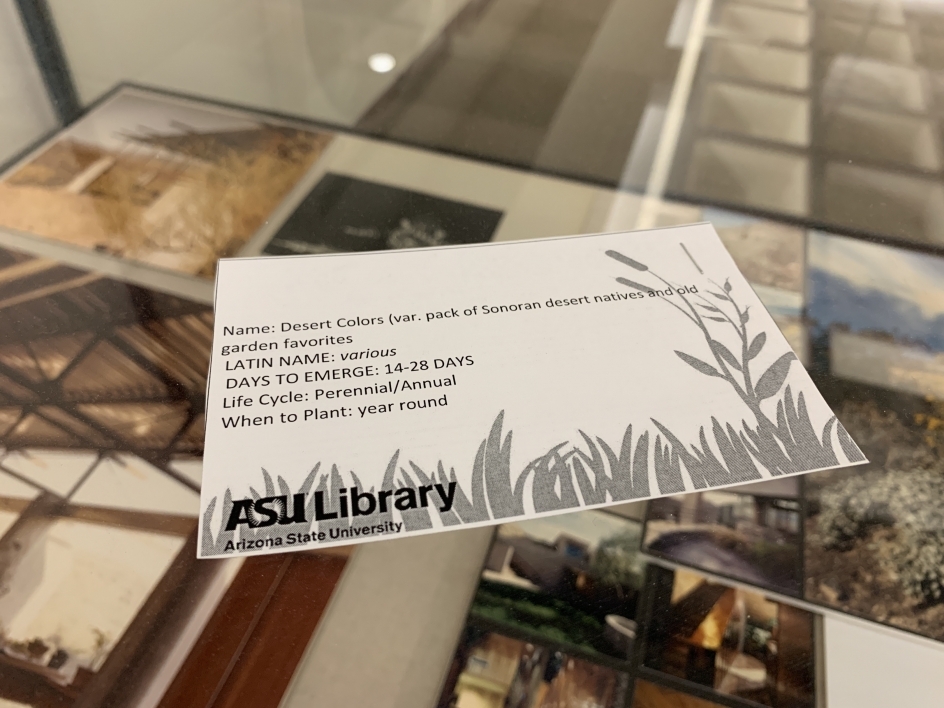 ASU affiliates are welcome to check out up to five seed packets per calendar month from the seed library. 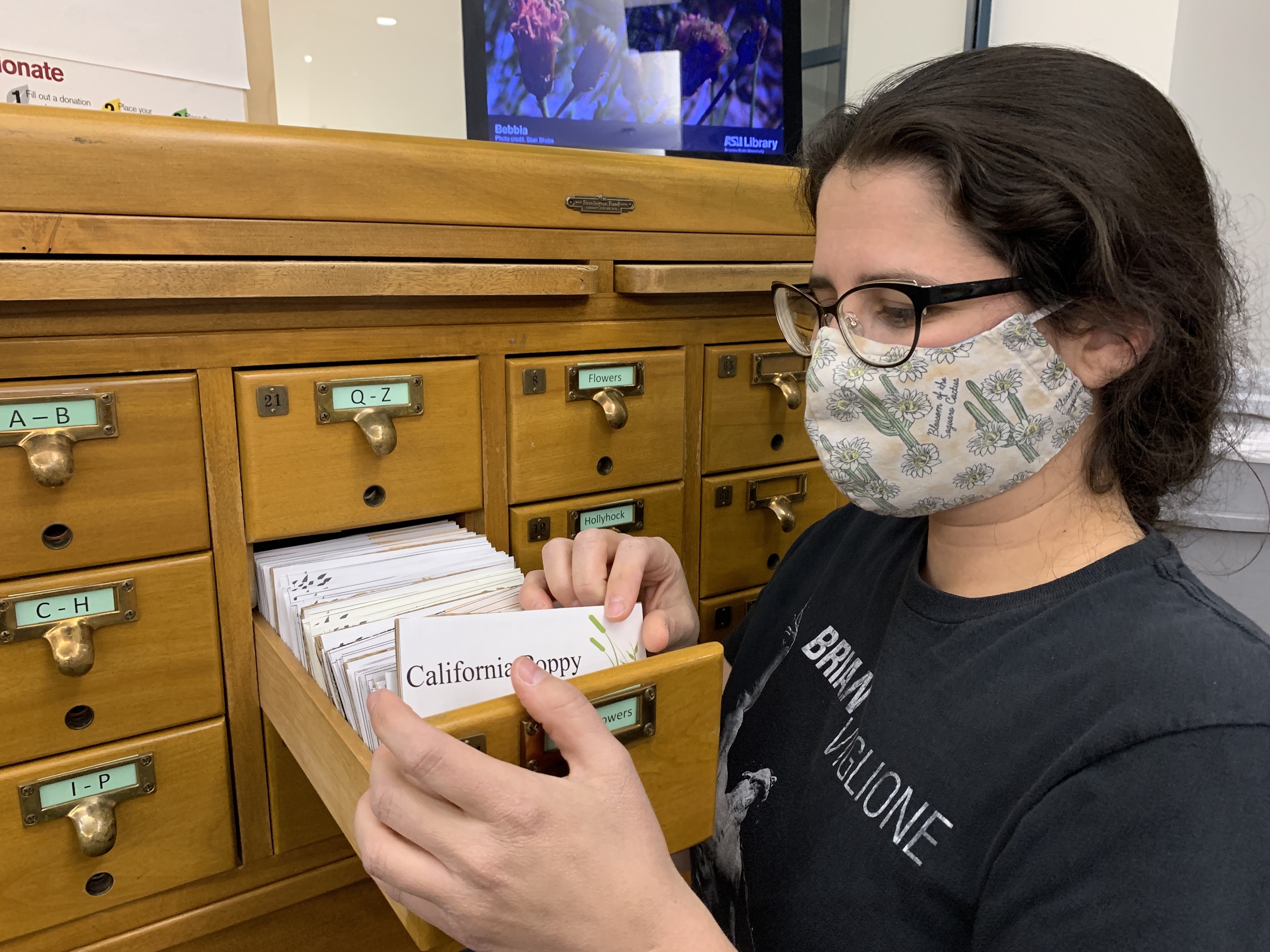 Christina Sullivan is the keeper of the seed library. “The seed library is really good at teaching people about what can grow in Arizona,” she said.

Their protection is, of course, highly consequential to both animals and people that depend on the saguaro’s provision of a home and food for birds, insects, reptiles, bats and other mammals.

Sullivan’s encouragement of native plant growth aligns well with a new citizen science project throughout April that invites the ASU community and the entire state of Arizona to document flowering plants and pollinators on ASU’s campuses.

Citizen science is a collaborative process among scientists and the general public to speed up the collection of data by scaling up the number of informed data collectors and the tools and resources to which they have access, making libraries key facilitators.

This year’s project, rooted at the intersection of Earth Month and Citizen Science Month, was jointly developed by the Center for Biodiversity Outcomes and the School for the Future of Innovation in Society with support from SciStarter, a popular online platform for citizen science projects founded by Darlene Cavalier, a professor of practice at the school.

“The idea to focus on pollinators and flowering plants grew out of our interest in recording and understanding the biodiversity present on ASU’s campuses,” said Alice Letcher, a project manager for the Center for Biodiversity Outcomes. “The data collected by citizen scientists will help us document the distribution of pollinators and flowering plants on ASU’s Phoenix-area campuses. In addition, the experience of developing a project for citizen scientists will help us understand how we can effectively engage the public.”

Developed by Jared Clements, an undergraduate student majoring in biology, the project will assist the biodiversity research of Gwen Iacona, an assistant research professor in the School of Life Sciences, within The College of Liberal Arts and Sciences.

There are three questions that citizen scientists will help them to answer:

“We’re interested in what differences we can observe in how the two groups collect data,” said Letcher.

Several local public libraries around Phoenix and the East Valley are providing citizen science kits for those wanting to participate. The kits contain things like “field guides, magnifying lenses and other materials to make the data collection experience more robust,” Cavalier said.

A limited number of citizen science kits for homeschoolers are available at Fletcher Library on ASU’s West campus. The outreach effort is being led by Carolyn Starr, the outreach coordinator for the New College of Interdisciplinary Arts and Sciences.

Get information and register for the project, which is open to all ages and levels of experience.