In 2017, the first interstellar object from beyond our solar system was discovered via the Pan-STARRS astronomical observatory in Hawaii. It was named ‘Oumuamua, meaning "scout" or "messenger" in Hawaiian. The object was like a comet, but with features that were just odd enough to defy classification. This painting by William K. Hartmann, who is a senior scientist emeritus at the Planetary Science Institute in Tucson, Arizona, is based on a commission from Michael Belton and shows a concept of the ‘Oumuamua object as a pancake-shaped disk. Illustration by William Hartmann Download Full Image

Two Arizona State University astrophysicists, Steven Desch and Alan Jackson of the School of Earth and Space Exploration, set out to explain the odd features of ‘Oumuamua and have determined that it is likely a piece of a Pluto-like planet from another solar system. Their findings have been recently published in a pair of papers (part I and part II) in the AGU Journal of Geophysical Research: Planets.

“In many ways ‘Oumuamua resembled a comet, but it was peculiar enough in several ways that mystery surrounded its nature, and speculation ran rampant about what it was,” said Desch, who is a professor in the School of Earth and Space Exploration.

From observations of the object, Desch and Jackson determined several characteristics of the object that differed from what would be expected from a comet.

In terms of speed, the object entered the solar system at a velocity a bit lower than would be expected, indicating that it had not been traveling in interstellar space for more than a billion years or so. In terms of size, its pancake shape was also more flattened than any other known solar system object.

They also observed that while the object acquired a slight push away from the sun (a "rocket effect" common in comets as sunlight vaporizes the ices they are made of), the push was stronger than could be accounted for. Finally, the object lacked a detectable escaping gas, which is usually depicted visibly by a comet’s tail. In all, the object was very much like a comet, but unlike any comet that had ever been observed in the solar system.

Desch and Jackson then hypothesized that the object was made of different ices and they calculated how quickly these ices would sublimate (passing from a solid to a gas) as ‘Oumuamua passed by the sun. From there, they calculated the rocket effect, the object’s mass and shape, and the reflectivity of the ices.

“That was an exciting moment for us,” Desch said. “We realized that a chunk of ice would be much more reflective than people were assuming, which meant it could be smaller. The same rocket effect would then give 'Oumuamua a bigger push, bigger than comets usually experience.”

Desch and Jackson found one ice in particular — solid nitrogen — that provided an exact match to all the object’s features simultaneously. And since solid nitrogen ice can be seen on the surface of Pluto, it is possible that a cometlike object could be made of the same material.

“We knew we had hit on the right idea when we completed the calculation for what albedo (how reflective the body is) would make the motion of ‘Oumuamua match the observations,” said Jackson, who is a research scientist and an Exploration Fellow at ASU. “That value came out as being the same as we observe on the surface of Pluto or Triton, bodies covered in nitrogen ice.”

“It was likely knocked off the surface by an impact about half a billion years ago and thrown out of its parent system,” Jackson said. “Being made of frozen nitrogen also explains the unusual shape of ‘Oumuamua. As the outer layers of nitrogen ice evaporated, the shape of the body would have become progressively more flattened, just like a bar of soap does as the outer layers get rubbed off through use.” 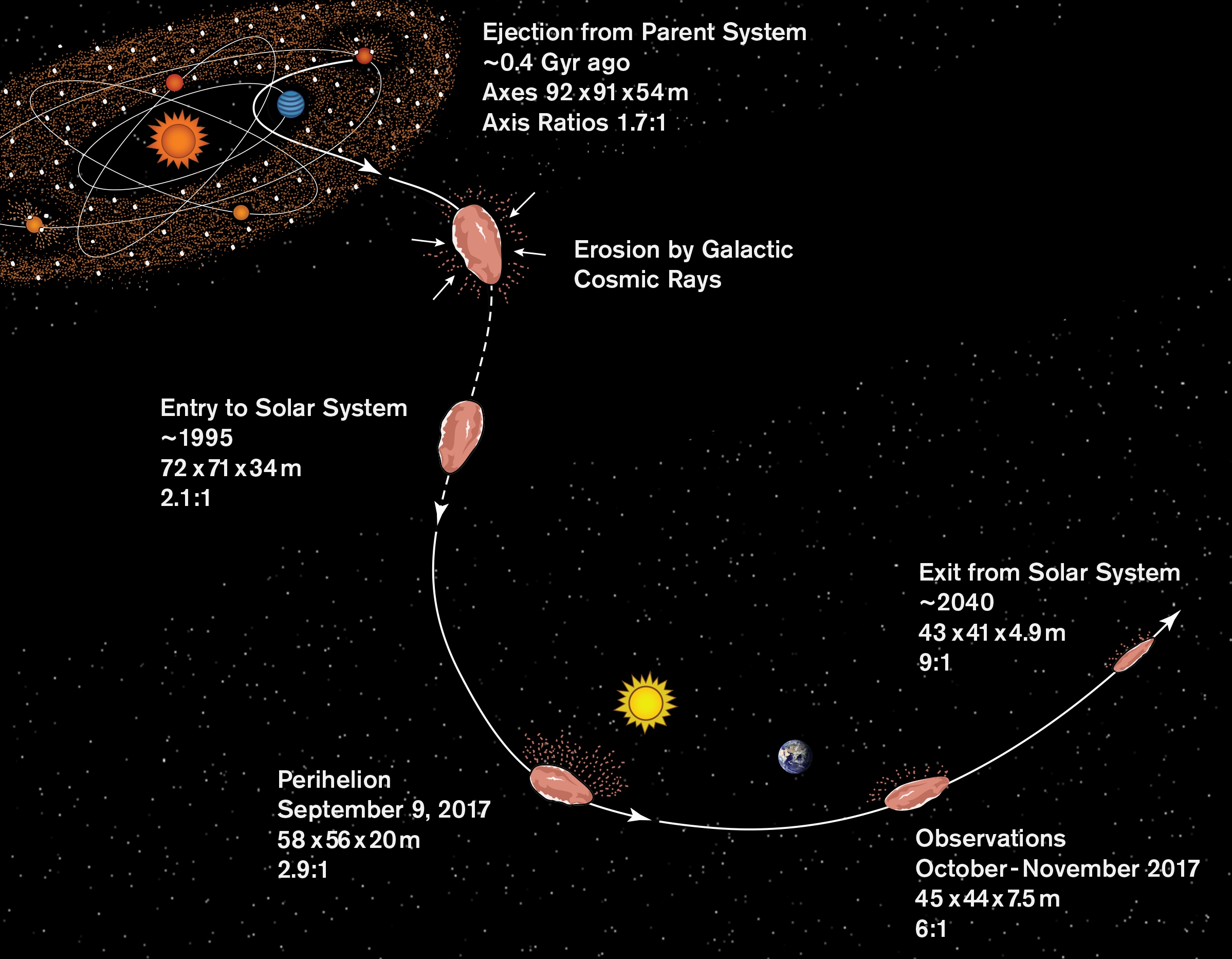 Illustration of a plausible history for 'Oumuamua: Origin in its parent system around 0.4 billion years ago; erosion by cosmic rays during its journey to the solar system; and passage through the solar system, including its closest approach to the Sun on Sept. 9, 2017, and its discovery on October 2017. At each point along its history, this illustration shows the predicted size of 'Oumuamua, and the ratio between its longest and shortest dimensions. Graphic credit: S. Selkirk/ASU

Could ‘Oumuamua have been alien technology?

Although ‘Oumuamua’s cometlike nature was quickly recognized, the inability to immediately explain it in detail led to speculation that it is a piece of alien technology, as in the recently published book "Extraterrestrial: The First Signs of Intelligent Life Beyond Earth" by Avi Loeb of Harvard University.

This has sparked a public debate about the scientific method and the responsibility of scientists not to jump to unwarranted conclusions.

“Everybody is interested in aliens, and it was inevitable that this first object outside the solar system would make people think of aliens,” Desch said. “But it’s important in science not to jump to conclusions. It took two or three years to figure out a natural explanation — a chunk of nitrogen ice — that matches everything we know about ‘Oumuamua. That’s not that long in science, and far too soon to say we had exhausted all natural explanations.”

Although there is no evidence that it is alien technology, as a fragment of a Pluto-like planet, ‘Oumuamua has provided scientists with a special opportunity to look at extrasolar systems in a way that they have not been able to before. As more objects like ‘Oumuamua are found and studied, scientists can continue to expand our understanding of what other planetary systems are like and the ways in which they are similar to, or different from, our own solar system.

“This research is exciting in that we’ve probably resolved the mystery of what 'Oumuamua is and we can reasonably identify it as a chunk of an ‘exo-Pluto,’ a Pluto-like planet in another solar system,” Desch said. “Until now, we've had no way to know if other solar systems have Pluto-like planets, but now we have seen a chunk of one pass by Earth.”

Desch and Jackson hope that future telescopes, like those at the Vera Rubin Observatory/Large Synoptic Survey Telescope in Chile, which will be able to survey the entire southern sky on a regular basis, will be able to start finding even more interstellar objects that they and other scientists can use to further test their ideas.

“It's hoped that in a decade or so we can acquire statistics on what sorts of objects pass through the solar system, and if nitrogen ice chunks are rare or as common as we've calculated,” Jackson said. “Either way, we should be able to learn a lot about other solar systems, and whether they underwent the same sorts of collisional histories that ours did.”

This year, the Arizona State University Department of Psychology is getting creative with their participation in Sun Devil Giving Day.The department is working to raise funds for student scholarships and opportunities through the Undergraduate Scholarship Fund and Psychology Innovation Fund. But instead of just asking for contributions, faculty and staff are participating in a pullup challenge.The...

This year, the Arizona State University Department of Psychology is getting creative with their participation in Sun Devil Giving Day.

The department is working to raise funds for student scholarships and opportunities through the Undergraduate Scholarship Fund and Psychology Innovation Fund. But instead of just asking for contributions, faculty and staff are participating in a pullup challenge.

Faculty, staff, students —and even children — from the ASU Department of Psychology perform pullups to fundraise for student scholarships. Download Full Image

The challenge was the idea of David Lundberg-Kenrick, media outreach specialist and program manager of the Psych For Life initiative. Through Sun Devil Giving Day on March 18, Lundberg-Kenrick promised to donate 50 cents per completed pullup for whoever did the most pullups in the department. Pullups are considered an exercise that builds a foundation of core strength, much like scholarships do in supporting students in need.

Word spread quickly, and psychology faculty, graduate students and staff members began logging their pullup totals and sharing videos of their feats of strength, all in the pursuit of increasing student scholarship funds. To date over 1,000 pullups have been logged.

“Never in my dreams did I expect so many pullups to be logged in response to my email. Supporting our students is so important to us in every initiative that we take on as a department that we thought this was a nice metaphor to physically raise funds for the students who are working so hard,” Lundberg-Kenrick said. “This is an important cause, and because of the pandemic, students need our help now more than ever.”

Michael Barlev, an assistant research professor, is the current leader in the competition and credits his strong showing to his rock climbing background. Barlev’s research focus is in social and evolutionary psychology and centers on cognition and culture and social decision-making.

“I really like Dave,” Barlev said. “But I’m going to bankrupt him. Joking aside, our department is a psychology family and we are here to support our students who are in financial need.”

Erika Pages, a graduate student who works with Michelle (Lani) Shiota, also joined the competition and added her pullups to the total. Adam Cohen, professor of psychology also recruited his young son to join him in the fundraising endeavor.

“Our department’s ability to advance exciting new initiatives, financially support our students’ achievements, and expand opportunities to underserved communities requires everyone to pitch in — from inside the department and from outside the university," said Steven Neuberg, department chair and Foundation Professor of psychology. "Our faculty, staff, students and alumni supporters continue to invest greatly in our mission, and I’m proud of how many of us have dedicated even more energy, even more thoughtful problem-solving, and even more dollars to advance our missions during these challenging times.”