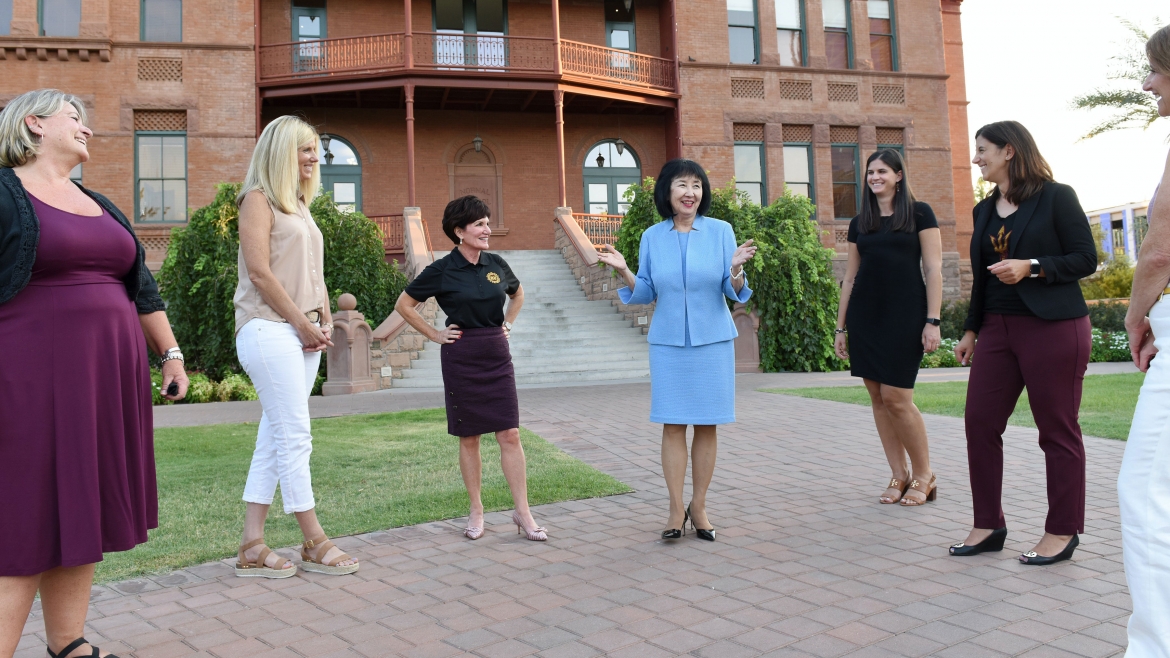 Editor's note: In recognition of Women’s History Month, ASU is highlighting inspiring women and their stories.

Christine Kajikawa Wilkinson’s career at Arizona State University has spanned many executive leadership roles, from admissions to athletics, in addition to her role as a tenured faculty member in the Division of Educational Leadership and Innovation in the Mary Lou Fulton Teachers College. A long-standing executive leader in public higher education and a dedicated community service leader, Wilkinson currently serves in three capacities at Arizona State University: senior vice president and secretary of the university, president and CEO of the ASU Alumni Association and managing director of the trustees of ASU.

Wilkinson (pictured above in light blue) is the first female minority vice president and first person in the position of secretary of the university. She serves as a principal university senior officer for all matters related to the Arizona Board of Regents, including facilitation of the university’s agenda relating to capital projects, budget planning, athletics, program development and tuition-setting. She also manages and provides direction for the president’s advisory groups and oversees university events and ceremonies, including the largest commencement in U.S. history when President Barack Obama spoke on May 13, 2009, with more than 68,000 people in attendance.

As president and CEO of the ASU Alumni Association, she leads all alumni initiatives, programs and events for the more than 500,000 Sun Devils around the world. When she was appointed to this role in 2005, she restructured the board of directors, developed a national alumni council and greatly enhanced the Alumni Association’s chapter network, which now includes more than 170 groups across the globe. The Phoenix Business Journal has named the ASU Alumni Association the No. 1 networking association in the Valley of the Sun for seven consecutive years.

As managing director of the trustees of ASU, Wilkinson oversees and provides direction for this advisory group that includes donors and alumni who have significant involvement in all aspects of the university. In this role, she establishes the trustee meeting agendas, oversees projects and serves as the liaison with each trustee as it relates to the trustee body.

External to the university, she has dedicated herself to the higher education profession. This involved serving in volunteer leadership capacities for state, regional and national boards including: ACT corporation trustee, College Board Western region committees; CASE (Council for Advancement and Support of Education) charter member of commission on student recruitment and retention, and positions with the Association for Public and Land-Grant Universities.

Wilkinson has been a part of numerous nonprofit organizations and continues to serve with a concentrated majority of her focus on health care, human services and positive development of children and youth. Her current community engagement includes serving on the following boards: Valley of the Sun United Way, Southwest Autism Research and Resource Center, Arizona Business Leadership Association, Japanese American National Museum Governors, Pat Tillman Foundation and Charter 100. She is also on the national leadership council for Big Brothers Big Sisters of America and the Arizona Educational Foundation advisory board. She is a member of the Arizona Women’s Forum and ASU Women and Philanthropy. 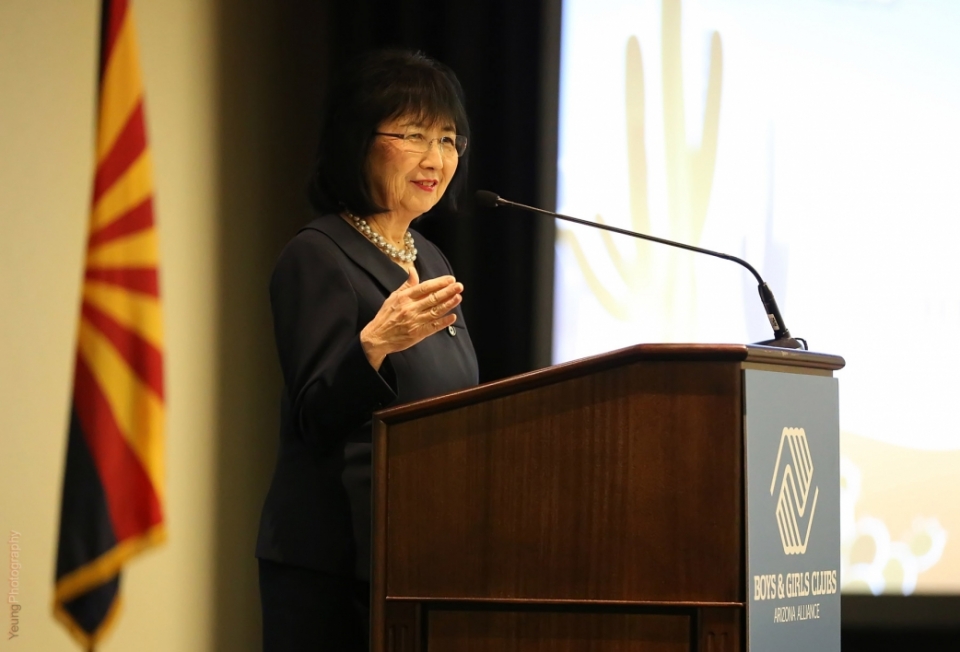 Wilkinson has received numerous awards throughout her career for her leadership and community service, including the Community Impact Award in 2020 from Big Brothers Big Sisters of Central Arizona; Corporate Leader of the Year in 2019 from Asian Corporate and Entrepreneur Leaders; the Don Carlos Humanitarian Award in 2018 from Tempe Community Council; Most Influential Women in Arizona Business in 2018 from AZ Business Magazine; Arizona Women’s Hall of Fame in 2017, first living legacy inductee in education; Most Admired Leader Lifetime Achievement Award in 2017 from the Phoenix Business Journal; the Golden Saguaro Award in 2016 from the Japanese American Citizens League; Who’s Who in Business in 2015 from the Arizona Republic; Tempe Business Woman of the Year in 2014 from the Tempe Chamber of Commerce; one of Arizona’s 48 Most Intriguing Women in 2012 by the Arizona Centennial Legacy Project; and Woman of the Year Award in 2009 by Valley Leadership.

Top photo: Christine Wilkinson speaks with class members of the ASU Leadership Institute and staff of the Alumni Association.

In a year when performing artists’ careers are at a standstill, Ji Yeon Kim, who goes by Jiji, is finding ways to keep her creativity alive and her music moving forward into the future. An assistant professor of guitar in the School of Music, Dance and Theatre at ASU, Jiji was recently named to The Washington Post’s first-ever Class of 21 for '21: Composers and performers who sound like tomorr...

In a year when performing artists’ careers are at a standstill, Ji Yeon Kim, who goes by Jiji, is finding ways to keep her creativity alive and her music moving forward into the future. An assistant professor of guitar in the School of Music, Dance and Theatre at ASU, Jiji was recently named to The Washington Post’s first-ever Class of 21 for '21: Composers and performers who sound like tomorrow. The article described Jiji as a mesmerizing performer who “represents an array of approaches, identities, experiences and exciting ways of imagining what our future together sounds like.”

Michael Broder of The Washington Post also recognized Jiji, the ASU Symphony Orchestra and its conductor Jeffery Meyer for a stirring performance of Hilary Purrington’s “Harp of Nerves,” which was specifically written for Jiji and orchestra. 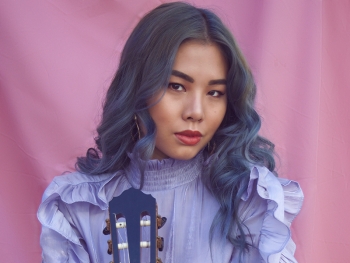 ASU Assistant Professor of guitar Ji Yeon Kim, who goes by Jiji, was recently named to The Washington Post’s first-ever Class of 21 for '21: Composers and performers who sound like tomorrow. Download Full Image

“Michael contacted me to say he listened to some of my music for my new album and thought the album was a really cool project,” said Jiji. “He is very interested in contemporary classical music — new works, new composers, music of now and in the future — and heard about the project through some of my composers.”

Two of the pieces on the album, “Cor” by Auznieks and “Dynjandi” by Björnsson, are funded by an ASU and Herberger Institute Research – Building Investment grant.

Due to delays caused by the pandemic, Jiji is recording the final works for the album for an anticipated release in fall 2021.

As a preview to her album, she is premiering the new works by the eight composers, including a recent livestreamed concert that was part of the Kansas City Harriman-Jewell Series and a performance of an electric guitar concerto written by Auznieks that is scheduled for December 2021 with Sinfonietta Riga in Latvia.

“As part of my album, one of the most exciting things I am looking forward to is working with composer Krists Auznieks,” said Jiji. “His work is one of the most difficult pieces I've ever played.”

Jiji is involved in another project recording works composed by Justin Holland, a civil activist, musician and the first African American to publish classical guitar works in the United States, for a new series of recordings of music by Black composers spanning nearly 200 years. The series, Rising Sun Music, is funded by a grant from the Sphinx Organization, and is part of the Rising Sun Music initiative created by Laura Downes. The initiative also includes compositions by ASU Professor of Practice Daniel Bernard Roumain and the 2019 ASU Composition Commission Competition winner Carlos Simon.

“After this very challenging time for artists not being able to perform and contribute to the arts as they normally would, it is so nice to see things being rescheduled now for 2022,” Jiji said.