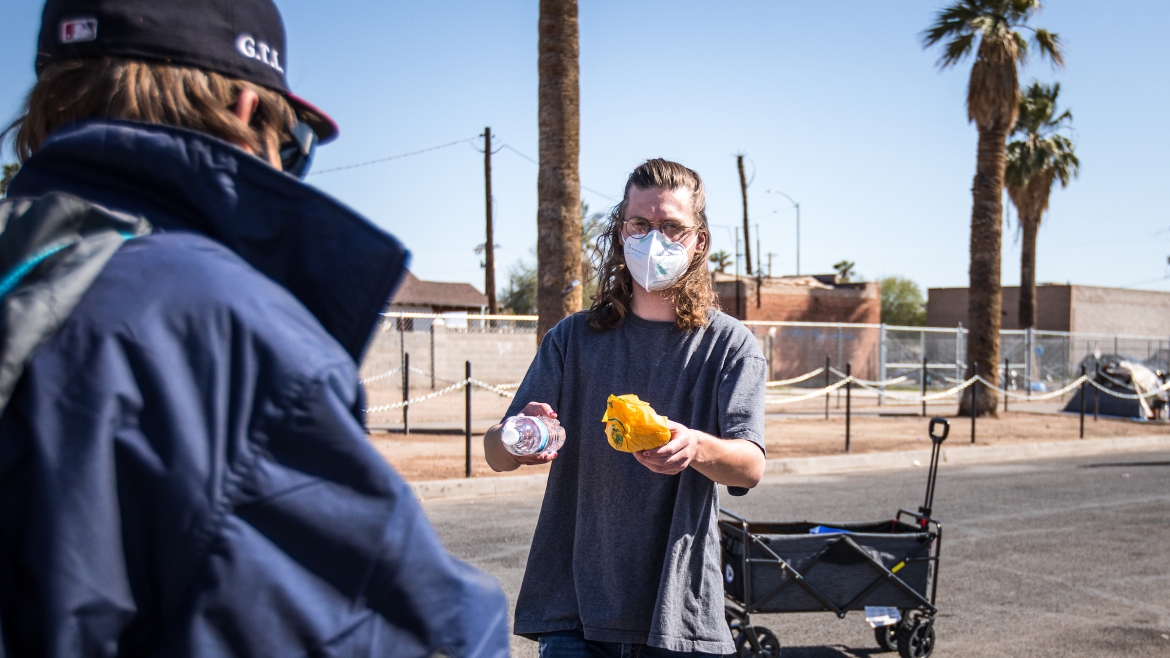 AZ Hugs for the Houseless helps those in need get the essentials, along with special requests like a deck of cards

July 2021 update: Austin Davis is releasing a jazz-poetry album with musician Joe Allie called “Street Sorrows,” about homelessness and Davis’ experiences with AZ Hugs for the Houseless during the pandemic. All proceeds from the project will be donated to AZ Hugs to help the group continue its work. The album, which will be released on all streaming services July 30, will go up for pre-sale on July 16. An August release show is in the works; follow Davis on Instagram @austinwdavis1 for updates about the show.

In March 2020, as college students were scrambling to adjust to the sudden changes wrought by the pandemic, Arizona State University undergraduate Austin Davis kept his focus on others — specifically the homeless population of the metro Phoenix area.

He joined his friend Eddie Chavez Calderon, the campaign organizer for Arizona Jews for Justice (AJJ), to hand out water bottles and face coverings to this most vulnerable part of the Arizona population, particularly hard-hit by the pandemic.

Food, water and hygiene products were the essential items supplied to people without homes during the weekly deliveries. However, as Davis’ experience and the pandemic progressed, he noticed that people were beginning to request specific items they were yearning for, whether it was a meal from their favorite restaurant or a deck of cards.

This was the spark that began the Arizona Jews for Justice Unsheltered Outreach program, now called AZ Hugs for the Houseless since January 2021. “Hugs” is actually an acronym explaining the mission of the group: to provide Houseless dignity, Understanding and empathy, Generosity, and Soul and smiles.

“We noticed that people were asking for very specific things, stuff that would make them happy,” said Davis, a poet studying creative writing at ASU. “That’s the biggest portion of this project, trying to bring these little items to people to bring them joy.”

Every week during deliveries of essential items, Davis asks people what he can get for them to bring them happiness, jotting down the specifics in his phone. These items are put on the AJJ website so volunteers and donors can buy items such as a “duffel bag for Robert” and a “wagon for James,” both of which the site currently features. The items are mailed to the AJJ office and then are distributed.

“When you're living on the streets and your first priority is survival, I think that these little things to ease your mental health are just so incredibly valuable,” said Davis. 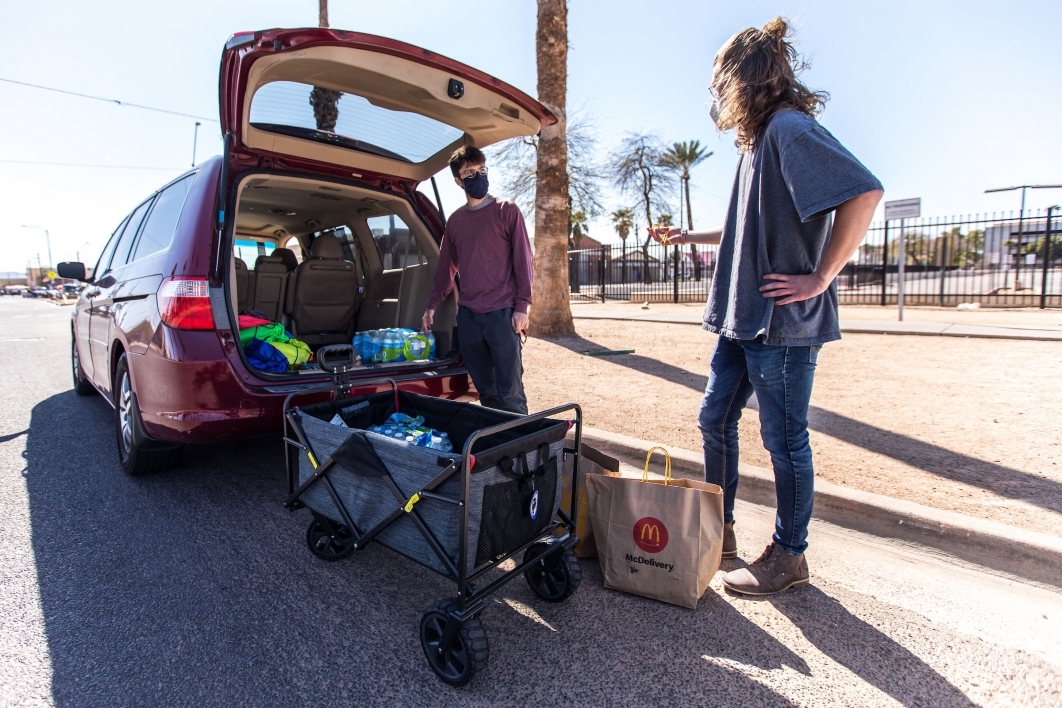 Volunteer and ASU alum Henry Eischen (left) and third-year creative writing student Austin Davis fill a wagon with water, sandwiches and apples before they head to the tent village near 12th Avenue and Madison Street in downtown Phoenix on Feb. 27. Davis spends part of most days delivering supplies as part of Hugs for the Houseless, work done in conjunction with Arizona Jews for Justice. Todd Bauer, along with his five Chihuahuas, waits for his wife, Donna, tor return to their place at the tent village Febr. 27. Student Austin Davis was making some calls, trying to help helping the Bauers get back to Glendale. 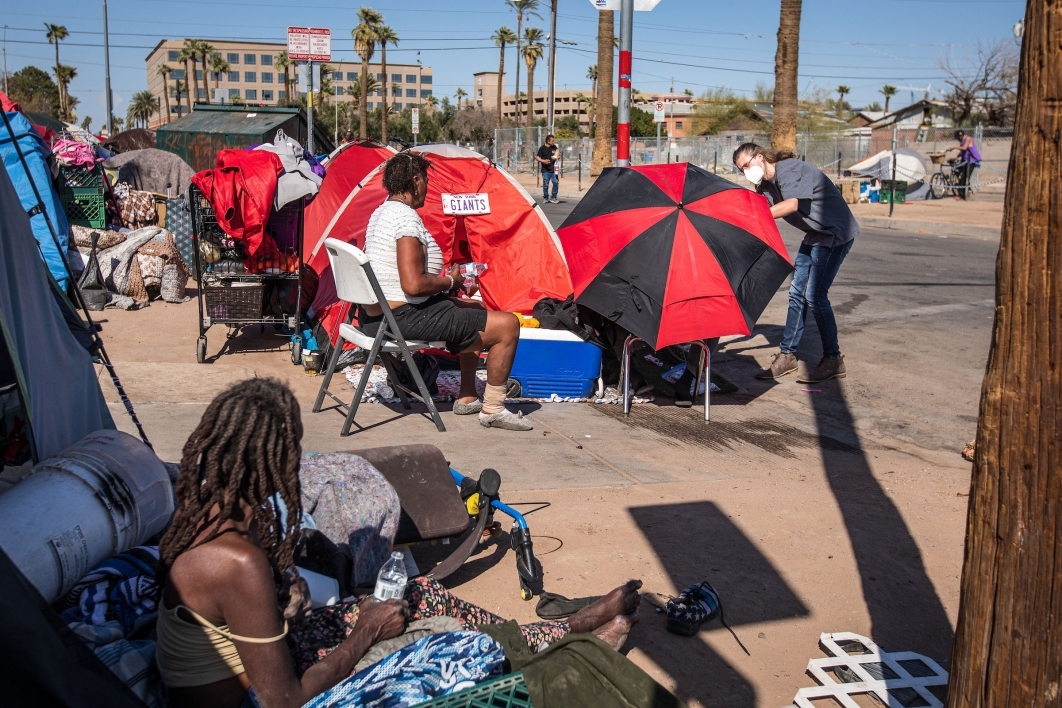 ASU creative writing student Austin Davis passes out chicken sandwiches at the tent village Feb. 27. Davis, who has seen numerous unsheltered artists including poets, storytellers and musicians living on the streets, has a long-term goal of providing art supplies through AZ Hugs for the Houseless. Kayla Contreras looks for clothing that she can pass to some of her friends at the tent village in downtown Phoenix on Feb. 27. AZ Hugs for the Houseless also previously partnered with ASU Project Humanities over the summer to provide clothing, blankets and sleeping bags to the homeless community.

“Project Humanities has been such a blessing,” Davis said. “I’m super blessed and grateful to be partners with them because they really allow us to get these specific clothing items to those in need.”

As a poet, Davis has seen numerous unsheltered artists including rappers, poets, storytellers and writers living on the streets. Davis says he struggles with his own mental health and finds his writing to be therapeutic. He has a long-term goal of providing art supplies through AZ Hugs for the Houseless.

“Creating art for me is therapy; I can only imagine that for someone on the streets who is already struggling with their mental health, along with the daily task of survival — not being able to create your art, I can’t even really imagine that. It just seems so difficult,” Davis said. “Some of the most creative people that I’ve ever met are sleeping on the streets at night.”

For the past year, AZ Hugs for the Houseless — which is open to all community members — has been growing in terms of the number of volunteers and the donations the organization receives.

Currently, AZ Hugs for the Houseless has a donation drop box in the Digital Creative Studio, part of the Sparky’s Den area of the basement of the Memorial Union on the Tempe campus. ASU community members are encouraged to donate any items they are able to. Additionally, Davis has a growing list of volunteers who go with him on daily deliveries in the greater Phoenix area.

AZ Hugs for the Houseless was created with the goal of providing care and friendship to those experiencing homelessness.

“In your day-to-day lives, if you see an unsheltered person, don’t look away,” Davis said.  “Smile at them, talk to them, have a conversation with them — because they’re human too.”

The ASU donation drop box is located in the Digital Creative Studio in the basement of the Memorial Union on the Tempe campus. The hours of operation are 11 a.m. to 4 p.m. Mondays –Thursdays and 11 a.m. to 5 p.m. Fridays. Follow the group on Instagram @azhugs and @az_jews_for_justice

Donations accepted through the nonprofit Arizona Jews for Justice website. Small donations can be sent through Venmo to Austin Davis @austin-davis-399 or through PayPal @awdavis0214@gmail.com so that he is able to buy items such as tents, outerwear and food for those in need.

Top photo: Third-year creative writing student Austin Davis offers water and a sandwich to one of the men at the tent village near 12th Avenue and Madison Street in downtown Phoenix on Feb. 27. Davis spends part of most days delivering food and supplies as part of AZ Hugs for the Houseless. He frequently brings what the community provides — water, fruit, sandwiches, clothing and bedding, and sometimes special requests such as a pair of boots, radios or nice meals. He works in conjunction with Arizona Jews for Justice. Photo by Charlie Leight/ASU News

The past year has brought on challenging new circumstances and called attention to existing social injustices. In response to these challenges, the Institute for Humanities Research at Arizona State University has funded and organized events, initiatives and projects that seek to build more just futures through humanities methodologies. For example, the Scholarly Series on Hope and Empowerment, w...

The past year has brought on challenging new circumstances and called attention to existing social injustices. In response to these challenges, the Institute for Humanities Research at Arizona State University has funded and organized events, initiatives and projects that seek to build more just futures through humanities methodologies.

For example, the Scholarly Series on Hope and Empowerment, which took place in fall 2020 and is now available on the institute’s YouTube channel, amplified the voices of scholars whose work engages topics such as hope in Black social justice movements, the power of Indigenous storytelling and writing Asian American stories into the Western literary canon. 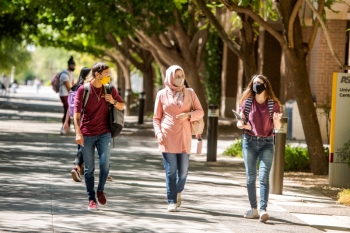 Additionally, the institute’s Health Humanities Initiative has risen to the challenges brought on by the COVID-19 pandemic to bring the humanities to the forefront of health care conversations.

“In the fall, we developed a successful and well-attended series of events bringing humanities scholars who had spent their careers working on the histories and representations of epidemics into discussions with ASU faculty about what their work revealed about the present crisis,” said Health Humanities Initiative Program Lead and Associate Professor of English Cora Fox.

This four-part series is just one example of the work the Health Humanities Initiative has done to give voice to the humanities during the current health crisis.

The institute also continues to offer funding for research, projects and fellowships that apply humanities work to address social challenges in the past, present and future. A recently awarded project titled “Mapping Black Ecologies” intercepts place, ecology and history in order to draw to light the ongoing realities of toxic stewardship and dominion and their impact on the health of rural Black communities.

These projects build on the institute’s fundamental value that the humanities must be at the center of understanding culture, society, economics, human nature, language and technology. They show how humanities work is essential to heal the wounds of the past and build humane communities in the future.

But there is still work to be done. The institute’s new direction is not just a reaction to a moment but a pillar for the future of humanities work.

The institute has several new projects in development, including a series of spring 2021 events on “Extraction, Disposability and Resistance” hosted by the institute’s Black Ecologies Initiative, new programming for the Scholarly Series on Hope and Empowerment and an “Epidemic Emergences: (Un)health and (In)justice” undergraduate course organized by the Health Humanities Initiative and Humanities Lab.

These projects, among many others, will continue to bolster the institute’s mission to build just, ethical and sustainable worlds with the humanities as the primary tool.

“We are very fortunate to have a team at the IHR that is committed to this belief that the humanities are valuable and necessary to make the world a better place,” said Lauren Whitby, senior marketing and communications specialist for the institute.

“In focusing our programming and communications on that belief, I’m hopeful that we will help give the humanities a louder voice in solving the problems that our communities face.”