One of the world’s foremost experts in paleoanthropology, Yohannes Haile-Selassie, known for major fossil discoveries in the African Rift Valley and extensive scholarship in human origins science, will lead the Institute of Human Origins (IHO) as its new director as of July 1— only the third since its founding in 1981.

“We are excited to bring Yohannes Haile-Selassie to ASU to lead one of the best programs in the world in human origins research,” said Patrick Kenney, dean of The College of Liberal Arts and Sciences at Arizona State University. “He rose to the top of a highly competitive national and international search for this position. The Institute of Human Origins has been under highly capable and very talented leadership for several decades. We are confident Director Haile-Selassie will move IHO to even more success in the coming years.” “It is an honor for me to lead one of the preeminent institutions in human origins research,” said Haile-Selassie. “Coming to IHO will provide me with the opportunity to closely work with some of the best researchers in my field and at the same time train students. I am looking forward to joining the research group at IHO and the faculty at the School of Human Evolution and Social Change.”

In his new role as director of IHO, Haile-Selassie will continue to direct the Woranso-Mille Paleontological Project in Ethiopia’s Afar region, a multidisciplinary project involving researchers from around the world, creating new opportunities for student research and connections to scholars in Africa. His team has made several major fossil discoveries in the Afar region of his native Ethiopia. Among the most notable are a partial skeleton of Australopithecus afarensis (nicknamed “Kadanuumuu,” a contemporary of the famous “Lucy” skeleton, discovered by IHO Founding Director Donald Johanson), a partial hominin foot with an opposable big toe and a new hominin species Australopithecus deyiremeda. 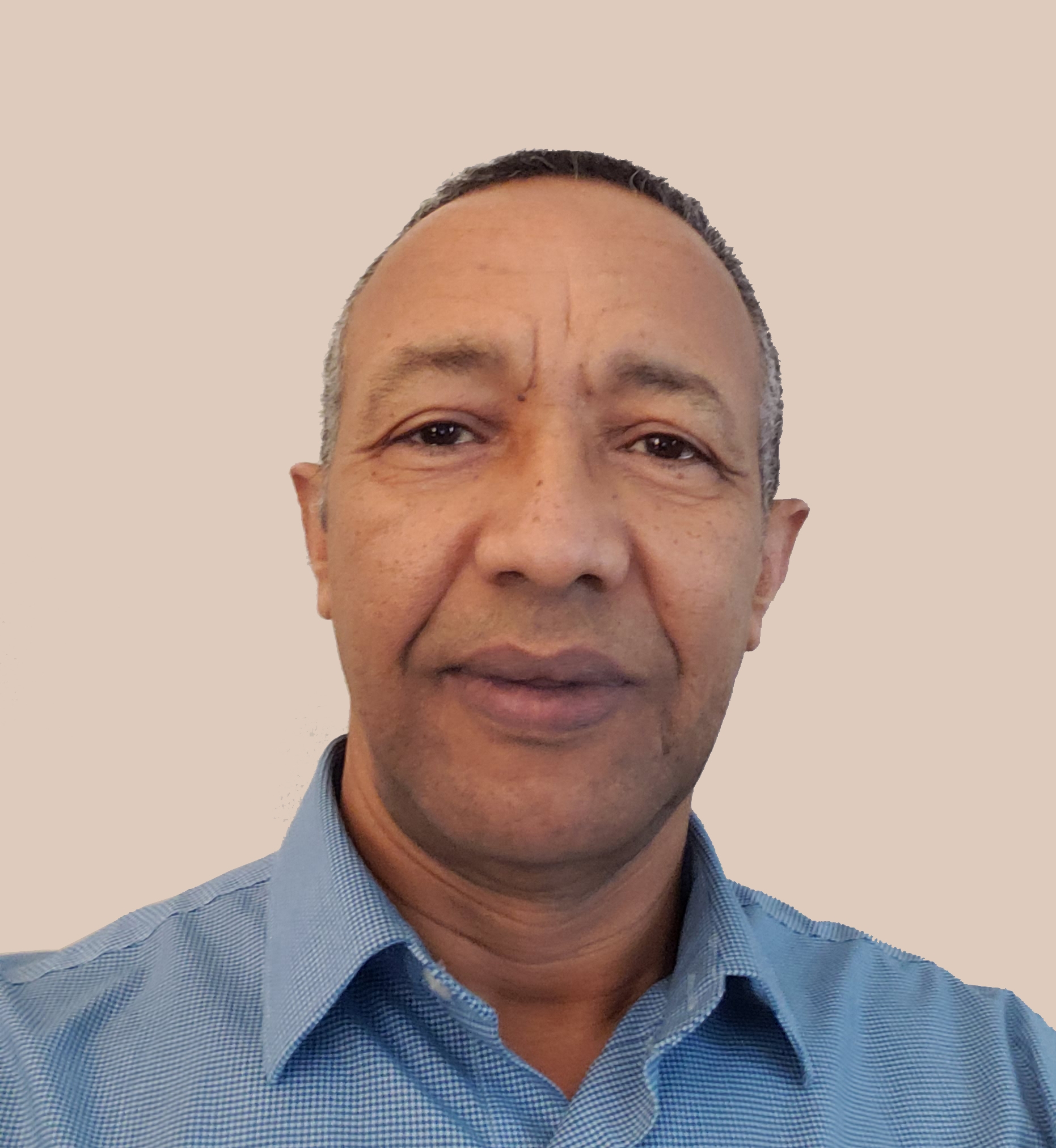 “Yohannes and his team have made vital fossil finds in Ethiopia that have significantly enlarged our understanding of early hominin evolution. I am looking forward to working with him as the next phase of IHO unfolds,” said Johanson.

Founded in 1981 by Johanson and a committed board of directors in Berkeley, California, as an independent transdisciplinary research institute, the Institute of Human Origins joined ASU in 1997 as a research center within The College of Liberal Arts and Sciences, with its scientists joining the faculty of the then Department of Anthropology, now the School of Human Evolution and Social Change.

Haile-Selassie will succeed William Kimbel, who has been director since 2008. Kimbel, the Virginia M. Ullman Professor of Natural History and the Environment, will continue to be a member of the IHO research group, a faculty member in the School of Human Evolution and Social Change and a member of the IHO Executive Board.

Under Kimbel’s leadership, IHO’s annual research and operations budget tripled to $3 million and its scientific faculty have grown from five to today’s 19 scientists who conduct research across the spectrum of questions about “how we became human” — expanding its core paleoanthropology agenda to include primatology, cultural evolution and genetics.

“IHO is a mature, transdisciplinary research organization that has thrived under President Crow’s leadership of ASU, and it is ready for new ideas and directions as it heads into the future,” said Kimbel. “I am excited to welcome Yohannes to our group, and I look forward to working with him on the IHO leadership transition.”

Joining Haile-Selassie in IHO will be paleoecologist Denise Su, who has conducted paleoenvironmental research at early hominin sites in Tanzania and Ethiopia and recovered important primate fossils in China. In addition to her research, Su has led partnerships and programs at the Cleveland Museum of Natural History for the past several years. She will also join the faculty of the School of Human Evolution and Social Change.

Males of the extinct human species Paranthropus robustus were thought to be substantially larger than females — much like the size differences seen in modern-day primates such as gorillas, orangutans and baboons. But a new fossil discovery in South Africa suggests that P. robustus evolved rapidly during a turbulent period of local climate change about 2 million years ago, resulting in anatomical...

Males of the extinct human species Paranthropus robustus were thought to be substantially larger than females — much like the size differences seen in modern-day primates such as gorillas, orangutans and baboons. But a new fossil discovery in South Africa suggests that P. robustus evolved rapidly during a turbulent period of local climate change about 2 million years ago, resulting in anatomical changes that previously were attributed to differences between the sexes. 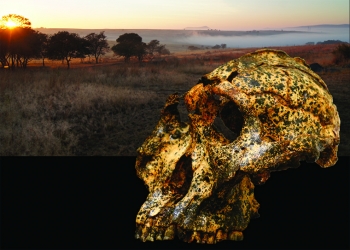 “Securing evidence that documents small anatomical changes over time is difficult in the fossil record, especially given how exceedingly rare early human fossils are,” said Schwartz, a research associate with the Institute of Human Origins and associate professor in the School of Human Evolution and Social Change.

The remarkably well-preserved fossil described in the paper was discovered by a student, Samantha Good, who participated in the Drimolen Cave field school co-led by institutions in the U.S., South Africa and Australia.

Researchers already knew that the appearance of P. robustus at around 2 million years ago in South Africa roughly coincided with the disappearance of Australopithecus, a somewhat more primitive early human ancestor, and the emergence in the region of early representatives of Homo, the genus to which modern people belong. This transition took place very rapidly, perhaps within only a few tens of thousands of years.

“The working hypothesis has been that climate change created stress in populations of Australopithecus leading eventually to their demise, but that environmental conditions were more favorable for Homo and Paranthropus, who may have dispersed into the region from elsewhere,” said co-author David Strait, of Washington University in St. Louis. “We now see that environmental conditions were probably stressful for Paranthropus as well, and that they needed to adapt to survive.”

The new specimen discovered at Drimolen, identified with the museum catalog number DNH 155, is clearly a male but differs in important ways from other P. robustus previously discovered at the nearby site of Swartkrans — where most of the fossils of this species have been found. 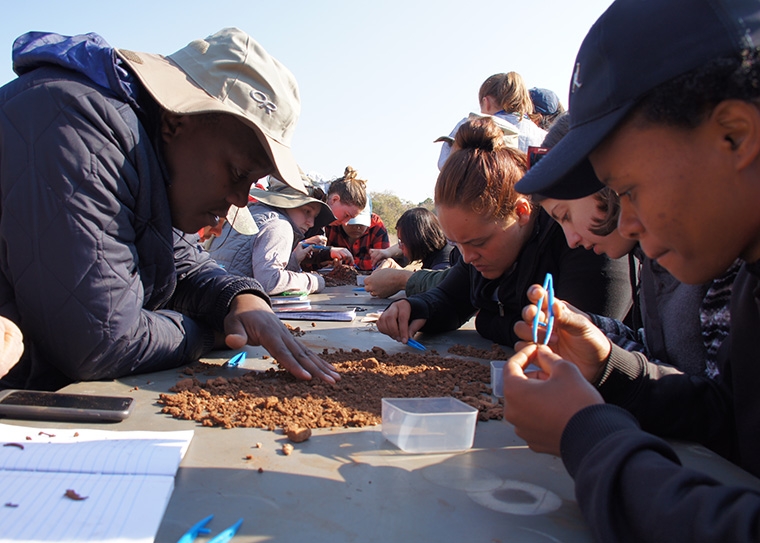 Usually, the fossil record reveals larger-scale patterns, such as when species or groups of species either appear in the fossil record or go extinct. So this Drimolen discovery provides a rarely seen window into early human evolution.

The new specimen is larger than a previously discovered, well-studied member of the species at Drimolen — an individual known as DNH 7 and presumed to be female — but is measurably smaller than presumed males from Swartkrans.

“It now looks as if the difference between the two sites cannot simply be explained as differences between males and females, but rather as population-level differences between the sites,” said co-author Jesse Martin, a doctoral student at La Trobe University in Australia. “Our recent work has shown that Drimolen predates Swartkrans by about 200,000 years, so we believe that P. robustus evolved over time, with Drimolen representing an early population and Swartkrans representing a later, more anatomically derived population.”

“One can use the fossil record to help reconstruct the evolutionary relationships between species and that pattern can provide all sorts of insights into the processes that shaped the evolution of particular groups,” Martin said. “But in the case of P. robustus, we can see discrete samples of the species drawn from the same geographic region, but slightly different times, exhibiting subtle anatomical differences, and that is consistent with change within a species.”

Andy Herries, a La Trobe University professor and co-director of the Drimolen project said, “Like all other creatures on earth, our ancestors adapted and evolved in accordance with the landscape and environment around them. For the first time in South Africa, we have the dating resolution and morphological evidence that allows us to see such changes in an ancient hominin lineage through a short window of time.”

The evidence of rapid but significant climate change during this period in South Africa comes from a variety of sources. Critically, fossils indicate that certain mammals associated with woodland or bushland environments went extinct or became less prevalent — while other species associated with drier, more open environments appeared locally for the first time.

“As is the case today, shifting climates alter local environments, and the rapid appearance of a more open, arid and cooler environment in South Africa at this time resulted in a change to the local ecology and thus, to the foods available on the landscape,” Schwartz said.

“We already knew that P. robustus had evolved a host of anatomical specializations of the skull that allowed it to consume and survive on the sorts of hard, tough, difficult-to-process foods. But when compared to geologically younger specimens from the nearby site of Swartkrans, the Drimolen cranium very clearly shows that it was less well adapted to eating these challenging menu items,” Schwartz continued. “What we have is a remarkable snapshot of how a dry climate led to natural selection altering the anatomy of this one species over only 200,000 years — a geological blink of the eye — from the less-efficient form at Drimolen to the evolution of a more powerful feeding apparatus present in Swartkrans P. robustus.”

It was also notable that P. robustus appeared at roughly the same time as our direct ancestor Homo erectus, as documented by an infant H. erectus cranium that the team discovered at the same Drimolen site in 2015. 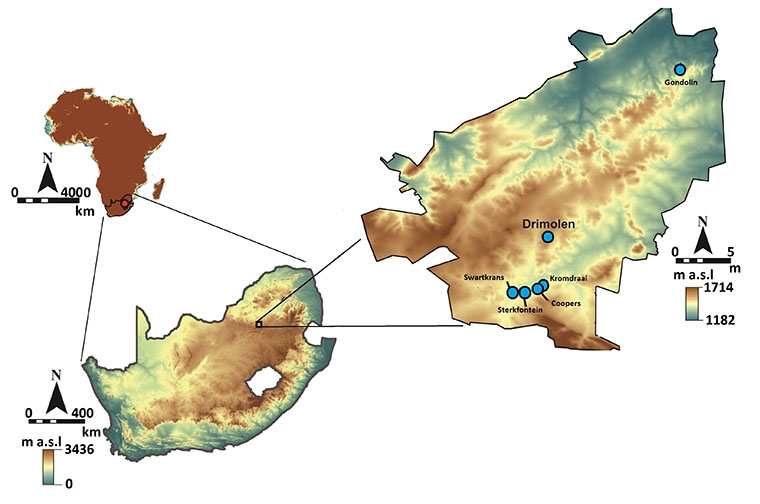 The Drimolen site and nearby Swartkrans, in South Africa. Map courtesy Andy Herries

“These two genera lived alongside a third genus of early human ancestor, Australopithecus, also present from sites within the same small valley,” Schwartz said. “How these hominins divvied up the landscape, especially during this period of radically shifting environments, is not yet clear and that is a major focus of our future research.”

Project co-director Stephanie Baker of the University of Johannesburg added, “Drimolen is fast becoming a hot spot for early hominin discoveries, which is a testament to the current team’s dedication to holistic excavation and post-field analysis. The DNH 155 cranium is one of the best-preserved P. robustus specimens known to science. This is an example of what careful, fine-scale research can tell us about our distant ancestors.”