Artificial intelligence and the future of national security

Artificial intelligence is a "world-altering" technology that represents “the most powerful tools in generations for expanding knowledge, increasing prosperity and enriching the human experience” and will be a source of enormous power for the companies and countries that harness them, according to the recently released Final Report of the National Security Commission on Artificial Intelligence.

This is not hyperbole or a fantastical version of AI’s potential impact. This is the assessment of a group of leading technologists and national security professionals charged with offering recommendations to Congress on how to ensure American leadership in AI for national security and defense. Concerningly, the group concluded that the U.S. is not currently prepared to defend American interests or compete in the era of AI.

The NSCAI was chartered by Congress in August 2018 to review AI and related technologies and make recommendations to address U.S. national security and defense needs. The commission, chaired by former Google Chief Executive Officer Eric Schmidt, spent over two years collecting information and compiling its recommendations. The NSCAI’s final report is expected to inform policy around defense-related AI issues over the coming years.

Below, Bliss discusses the NSCAI’s recommendations, why the federal government should drive some technological development and potential risks of widespread use of AI in defense and security operations.

Question: Why is advancing artificial intelligence important to national security?

Answer: First, as the NSCAI notes in its report, AI is a dual-use technology that can provide a competitive advantage in any sector — military or civilian. In other words, this is not like creating a new, more advanced version of a helicopter. This is a technology that will advance all other technologies. The countries that lead in AI technology will have a significant advantage in any arena.

Second, as AI becomes more ubiquitous, it can expand our threat landscape significantly. Information operations are already wreaking havoc on our civil society and democratic institutions and can be accelerated with more advanced AI. Cyber attacks could become more damaging and harder to defend against. And as the NSCAI notes, the competition to lead the world in AI development is not only about technological superiority. It is also about value systems. AI can be a powerful tool for authoritarian regimes to remain in power, and if the U.S. leads in AI, we and our like-minded allies can develop AI systems in alignment with democratic values.

Q: What do you see as the key takeaways from the NSCAI’s final report?

A: The report outlines a number of important recommendations and I urge anyone interested to read it, but I’ll highlight three here:

First, the commission recommends substantial new investments in AI research and development, including more than quadrupling Department of Defense spending on annual AI research, and increasing non-defense spending on AI research from a current level of approximately $1.5 billion to $32 billion by 2026 (through the Department of Energy, National Science Foundation, National Institutes of Health, National Aeronautics and Space Administration, and other federal agencies).

Second, the commission makes multiple recommendations aimed at elevating AI development to the level of a top-tier national strategic priority, instead of just viewing it as a technical challenge. For example, they recommend establishing a "Technology Competitiveness Council" in the White House, led by the vice president, that would oversee a coordinated approach to the global technology competition.

Finally, the commission notes that we need to accompany technological advances with educational efforts to develop a national security workforce that can work with and implement AI effectively.

Q: Why should the government be involved in driving AI development? Isn’t that the role of the private sector?

A: Actually, the government has compelling motivation for driving new technology development in certain circumstances, and government involvement has led to some of the greatest inventions in history.

Public- and private-sector motivations are appropriately different. While the private sector is primarily driven by market conditions, the public sector is driven by mission — in national security, defending the nation and working with allies to defend democratic values. This can lead to fundamentally different decisions about what to prioritize — security or convenience? Minimizing energy consumption so technology can operate longer in austere environments, or adding additional capabilities?

This mission-driven approach also allows governments to take a much longer view than most companies and invest in the basic research that may not lead to a profitable product for decades. The iPhone is a great example. Many of its capabilities were initially created through government-funded research. This includes the touch screen, GPS, speech recognition and others.

Q: History is full of new technologies spawning unintended negative consequences — a big one now is the rampant spread of disinformation online. What threats may arise or be accelerated with more advanced AI?

A: Artificial intelligence is capable of providing more horsepower to decision-making, allowing us to process incredible amounts of data quickly to come up with what we hope are the most effective decisions.

But of course the quality of that decision is reliant on the quality of the data and the fairness of the algorithms driving the decision-making. AI-enabled technology, in the end, is created by people and reflects many of our flaws and faults. We’ve seen many instances of this, and a great MIT Technology Review article highlighted just how sexist and racist current versions of AI can be because they are scraping data from the internet.

One major concern for the national security community is adversarial AI, or the possibility an adversary could purposefully manipulate the data fed into an AI system so that it provides faulty information, leading to bad decisions. As one could imagine, this could be incredibly damaging in a battlefield scenario or when responding to a natural disaster like a hurricane, when split-second life-or-death decisions need to be made.

Q: What can we do to decrease the chances those threats come to fruition?

A: There’s a lot that needs to be done, but I’m going to highlight actions in three areas here — research, education and policy.

In research, we need a heavy focus on developing AI that is trustworthy and functions as a good teammate. AI will not replace humans, it will work alongside us and should be developed to complement our skills and to serve as effective teammates. We also need more interdisciplinary research to complement computer science, which is too often focused on the question "can it be done," while we need to start asking "should it be done, and what are the potential vulnerabilities if it is done." The social sciences and humanities can bring this critical perspective into technology development. This idea is further outlined in a recent Computing Research Association white paper of which I was a co-author.

In education, we need broad initiatives aimed at expanding the pipeline of science, technology, math and engineering talent for defense and national security, and at reorienting today’s workforce so people can thrive when new technologies are introduced into their work environments. The report calls the talent deficit in DoD and the intelligence community the greatest impediment to being  "AI-ready by 2025." To bridge this talent deficit, we need to focus on the full spectrum of learning pathways from K–12 efforts, to community colleges to college degrees and graduate programs to upskilling and reskilling efforts.

In terms of policy, the NSCAI report calls on the U.S government to work with allies to develop a rules-based international order for the development and adoption of AI. The report recommends that the State Department take the lead on this and develop an International Science and Technology Strategy in concert with allies.

Early in February, small live events with the School of Music, Dance and Theatre’s Bachelor of Fine Arts candidates in dance took place at Arizona State University’s Margaret Gisolo Dance Theatre and included performances of original work created by the students, artist discussions and art installations. Recordings from the two days of events will stream March 12 at 7:30 p.m. With the help fr...

Early in February, small live events with the School of Music, Dance and Theatre’s Bachelor of Fine Arts candidates in dance took place at Arizona State University’s Margaret Gisolo Dance Theatre and included performances of original work created by the students, artist discussions and art installations. Recordings from the two days of events will stream March 12 at 7:30 p.m.

With the help from ASU faculty Carley Conder and Carolyn Koch, senior dance students had the opportunity to create and produce their own work for the production, “Transitions: Mouthful of Marbles,” which is the culmination of their undergraduate artistic experiences. The choreographers and performers aimed to show intimacy and personal investigation of identity through each movement in their pieces, asking questions on truth, commenting on society and exploring human nature. The Transitions Projects showcase is an annual event, and this year, students also met the added challenge of creating their own personal work while maintaining social distancing with their performers and exploring how dance performance is changing. 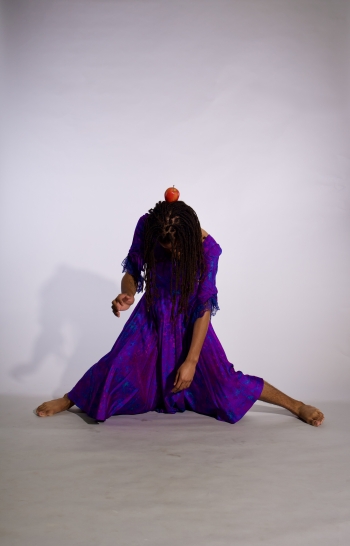 Student Avery Polster’s work looks at the continuous and final nature of endings. A series of overlapping and tied solos will use imagery and depth to build desolate worlds. This piece explores the intimacy of loneliness, the “cracking” of an identity’s several layers and the role expectations have on judgement.

“Since freshman year I have anticipated my turn to produce my senior capstone,” Polster said, “and I am honored to be a part of a constantly evolving tradition called ‘Transitions.’”

Polster described the performance as “a diverse show displaying a wide range of artists maturing and finding their creative voices through the building of surreal worlds, intimate landscapes and extremity.”

At the virtual event, audiences will also experience a work by The Imposter, formerly known as Ella Alzua. The Imposter said the piece dives into the “past experiences of a colored girl who could pass for something” and is “a solo exploration of what it feels like to live your life thinking of yourself as an imposter who will be exposed at any second for what you truly are instead of what the world wanted of you.” The Imposter builds a utopia for their unwanted fan club only to go mad inside of it.

“I am most excited to come out to the world as an artist,” The Imposter said. “This year, I can truly say I have found my artistic voice, and it’s nice to say this is only the beginning.”

Searching within prehistoric eras, “Decorative Hierarchy” by student Shannon Smith researches the dinosaur and how far society has come since then.

“But have we changed that much? Within the world we create, every fourth day is a birthday, and the advancement of hierarchy doesn't seem to change. It's merely for decoration,” Smith said of the piece. 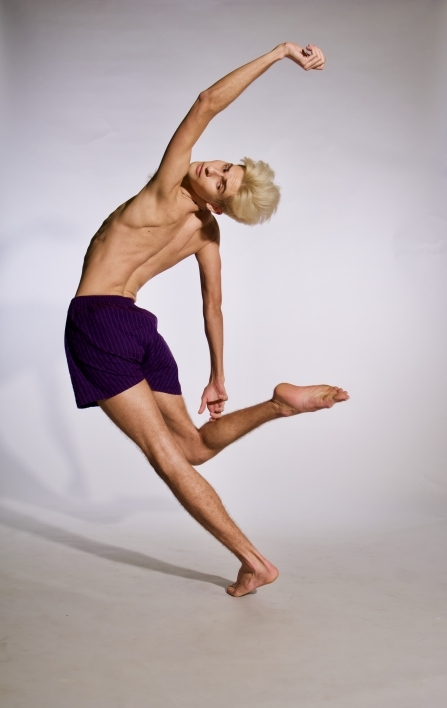 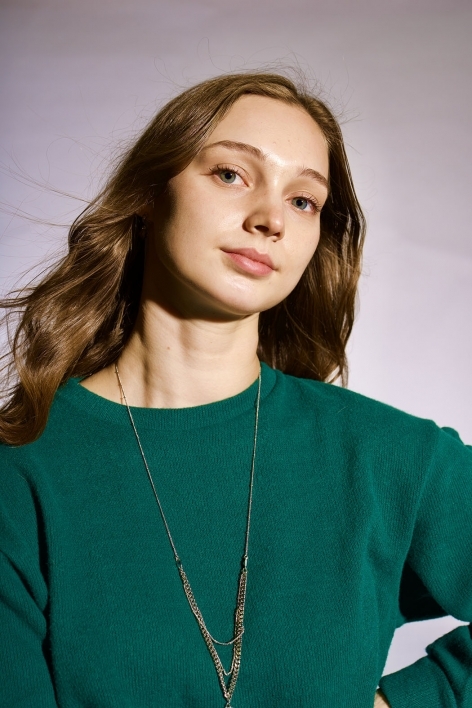 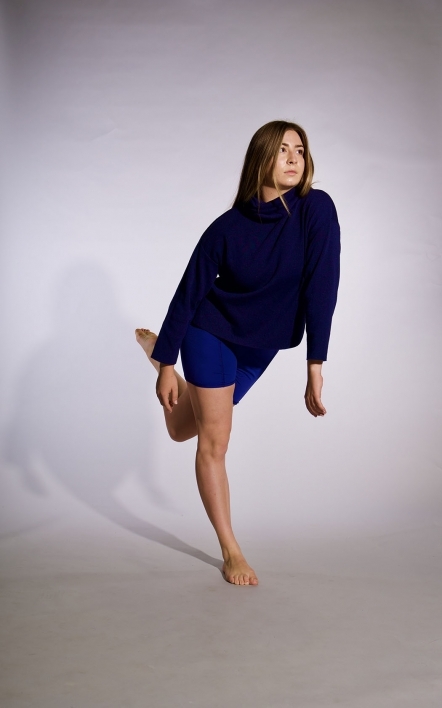 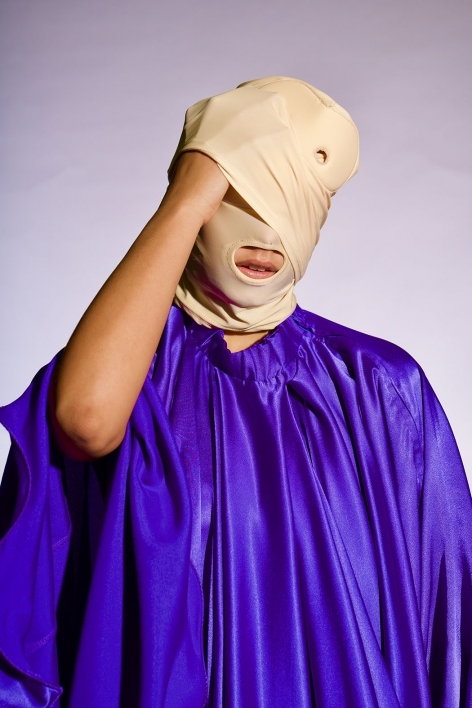 “What’s so exciting about this project is that it has been a glimpse into my career,” she said. “After every rehearsal I can’t help but smile and think this is what I’m going to do for the rest of my life. I love it.”

The production will also feature “True, False, and Floating Ribs” by Mira Hills. This solo work explores the Boolean order of operations that evaluates true or false to determine the response of true. The work reflects the overwhelming nature of determining the difference between true and/or/not false information. Inspired by white lies and disappointment, the work investigates information received and eliminates inappropriate hits that must be scanned before discarding, thus saving time and effort.

The students said choreographing during this pandemic has been both challenging and insightful and that “Mouthful of Marbles” has been their opportunity to showcase how they have overcome and adapted to ever-changing circumstances.

“This entire experience,” Smith said, “from doing rehearsal on Zoom to deciding what color masks the dancers should wear has shown me the unlimited possibility (and necessity) for art performance as we move into a virtual world.”