Arizona State University Assistant Professor Kerry Geiler-Samerotte was recently named a recipient of the 2021 Sloan Research Fellowship, one of the most prestigious awards available to early career researchers. 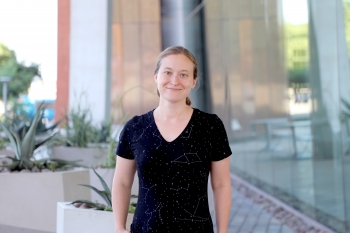 Kerry Geiler-Samerotte is an evolutionary cell biologist and assistant professor in ASU’s School of Life Sciences and the Biodesign Center for Mechanics of Evolution. Download Full Image

“Kerry is a wonderful colleague, mentor and educator, making significant contributions to our understanding of how cellular features evolve at the molecular level,” said Michael Lynch, director of the Biodesign Center for Mechanisms of Evolution and professor in the School of Life Sciences. “Competition for Sloan Fellowships is intense, so the award is a strong validation of her growing reputation as a scholar and emerging leader in our field.”

Geiler-Samerotte is an evolutionary cell biologist and assistant professor in ASU’s School of Life Sciences and the Biodesign Center for Mechanisms of Evolution.

As biologists work toward understanding and developing solutions to the world’s health problems, one major challenge is how much the effects of genetic variation depend on context. For example, contexts like environments and genetic background can change whether a mutation has a positive or negative impact on an organism’s health. This can obscure which genetic variants are contributing to disease. It also complicates predictions for how genetic variations present across diverse populations will respond to drugs.

To combat these challenges, Geiler-Samerotte intends to move beyond simply mapping the effects of genetic changes on organisms, to understanding how and why these effects change across diverse contexts.

“I'm motivated by the idea that biologists may need to change the way we think,” she said. “Many ideas are still founded on the notion that genetic changes have fixed, rather than context-dependent, effects.

“For example, consider 'evolutionary traps,' which aim to trap infectious microbes or tumors by selecting for mutations that encourage resistance to some drugs at the expense of others. These traps will fail if cells can escape via contextual changes that disrupt the correlation between resistance and susceptibility. But how common is context dependence? Is it common enough to create concern? These are the questions that my research will answer.”

She combines high-throughput experiments in yeast with cutting-edge statistical and computational approaches to measure the characteristics and strength of a large number of mutations across different environments. She uses these measurements to build predictive models to reveal how new mutations will behave in contexts and environments we haven’t studied before.

“I am honored to receive this award and to have my work be supported by the Sloan Foundation,” she said. “This award will allow me to increase the throughput of my experiments that measure the impacts of mutations across different contexts, which will provide a richer understanding of context dependence.”

The Alfred P. Sloan Foundation was established in 1934, and the first Sloan Research Fellowships were awarded in 1955. Highly sought after, former Sloan Research Fellows have gone on to receive some of the highest honors the scientific and technical communities can bestow, including the Nobel Prize, Fields Medal in mathematics, National Medal of Science and the John Bates Clark medal in economics.

The 2021 fellowship cohort includes 128 researchers from 58 institutions across the U.S. and Canada. Each will receive a two-year, $75,000 fellowship that can be used to advance their research. Geiler-Samerotte joins seven other faculty from ASU who have received a Sloan Research Fellowship over the years.

“ASU is the best place for this research because of the interdisciplinary nature of our research centers and departments,” said Geiler-Samerotte. “My work involves evolutionary, computational, molecular, cell and quantitative biology. I enjoy being part of a research community where scientists from different disciplines work together to improve each other's research and let each other achieve more than would have been possible alone.”

Almost a year has passed since the last Arizona Psychology Undergraduate Research Conference was altered from an in-person event to a virtual conference, and Psi Chi at ASU Tempe is now accepting submissions for another virtual conference on April 17.

The Arizona Psychology Undergraduate Research conference (AZPURC) is an annual conference hosted by Psi Chi at ASU Tempe, the Tempe chapter of the international psychology honor society. The tradition of AZPURC has been a combined effort from students, staff and faculty since 2016, featuring keynote presentations from faculty speakers and a poster session from undergraduates. However, the conference is organized entirely by undergraduate students and is a valuable learning experience in both research and organization. Psychology undergraduate Emily Smith (right) shares her research at the AZPURC conference in 2019. This year's conference will be virtual and is now accepting submissions for posters. Download Full Image

This year’s first keynote presentation will be from Jessica Verpeut, an assistant professor of psychology in the area of behavioral neuroscience, who will be discussing her research on the cerebellum and social behavior. The second keynote will be from Matt Meier, assistant clinical professor and co-director of the ASU Clinical Psychology Center, who will be speaking about transitioning therapeutic services to a teletherapy model during the pandemic. Additional presentations will feature graduate students from the Cooperation and Conflict Lab and the SPLAT lab, who will be discussing their COVID-19-related research.

This conference seeks to advance the field of psychology, to facilitate intercampus networking between colleges, and to celebrate and recognize the accomplishments and findings of undergraduates conducting research. It is also designed to be a place to practice presenting research in front of academic peers and mentors, and to receive crucial feedback that can help student researchers grow and eventually present at professional research conferences. Additionally, the networking and exploration that takes place at research conferences like AZPURC is extremely valuable for graduate school applications and discovering research interests.

“This year we are opening up poster presentations to all undergraduate majors. We believe in the importance of the intersection between psychology and a variety of fields. The conference will be held virtually on Saturday, April 17, and is open for all undergraduate students to attend or present research,” said Zoe Gould-Thompson, director of research and conferences for Psi Chi and an undergraduate research assistant in the Cooperation and Conflict Lab.

“There are hundreds of careers that involve psychological research, and we wanted to celebrate how interdisciplinary it is by expanding to other majors beyond psychology."

The poster submission deadline is March 17, but posters will be accepted on a rolling basis while spots remain.

“While we never expected the year that we have just endured, we are learning that innovation through necessity can be a great thing, and this virtual format will allow our student presenters to become familiar in yet another conference format,” said Gould.

For students who are nervous about their first poster session or submitting their research to an academic conference, Psi Chi compiled its best tips and tricks for a successful poster session.

Psi Chi is an international honor society whose purpose is to encourage, stimulate and maintain excellence in scholarship of the individual members in all fields, particularly in psychology, and to advance the science of psychology. Its main goal is to encourage members to maintain a lifelong interest in exploring psychology and to participate in opportunities and experiences that allow them to grow, from mentorship to research.