Deborah Helitzer got an early start thinking about health, fascinated from a very young age by why some people became ill while others stayed well.

"This curiosity made me realize that many factors contribute to and influence health — not just the genes that we inherit, but also factors such as where we live, what we eat, our cultural background, the level and type of education we receive, access to health care and the values that our families place on each of those aspects," said Helitzer, dean of Arizona State University's College of Health Solutions. 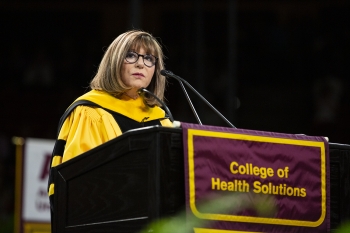 Dean Deborah Helitzer (pictured at the May 2019 College of Health Solutions convocation) says, "That only since the early '90s has the research community recognized the importance of including women and the gender differences in health issues. Before this time, the National Institutes of Health did not track whether women were enrolled in its federally funded research." Photo by Deanna Dent/ASU Now Download Full Image

She also got to see firsthand how women are often the decision-makers when it comes to health choices for a family.

"My mother was very concerned about health and nutrition, so our family ate less meat and more fresh vegetables and fruits than other families we knew," Helitzer said. "This was unusual at this time — most families were eating large amounts of red meat and canned vegetables packed in oil and sugar. While we were not rich, my family prioritized fresh foods. We lived in a nice, safe middle-class neighborhood, and education was extremely important to my parents. My upbringing was definitely a major part of my curiosity for how we can address and influence the many determinants of health."

It helped launch her into a career studying population health — that is, the health outcomes of a group of individuals, including the distribution of such outcomes within the group — with her research focused on health-outcome improvements through interventions in communities and in clinical settings. Here, she spoke with ASU News about how women's health has often been overlooked and why it's important that researchers include women in their studies.

Question: Historically, has women’s health not had as much attention or funding behind it, compared with men’s issues? What would be some reasons for that?

Answer: A gender bias in research has skewed the knowledge on women’s health. Much of what we know about diseases that affect both genders is based on research on men. For decades, clinical research was done solely or largely on men, and the results were extrapolated to women. Only since the early '90s has the research community recognized the importance of including women and the gender differences in health issues. Before this time, the National Institutes of Health did not track whether women were enrolled in its federally funded research. The Food and Drug Administration prohibited all women of childbearing age from taking part in early-phase drug trials. And researchers were reluctant to include women due to concern for the possible risks to women and/or their future fetuses and the complication of having to account for women’s varying hormonal states and cycles, which was thought to make it more difficult.

Only more recently have researchers begun studying diseases in women that are traditionally seen as men’s diseases, such as heart disease. Meanwhile, heart disease is actually the leading cause of death in women, and since 1984 more women have died of heart disease than men. Women do not present the classic symptom of heart disease — pain in the left side of their chest — and instead may experience a burning sensation in their upper abdomen, along with lightheadedness, upset stomach and sweating. Many women often ignore symptoms that indicate they are having a heart attack.

Q: Why is it so important to have an emphasis on women’s health, particularly across the life span?

A: For the most part, women are still the primary caregivers for their families. Women tend to defer taking care of their own health, or even feeding themselves, until every other family member is taken care of. We need to understand how to keep women healthy, and as noted in the example above, we need to understand why some diseases that we thought were experienced primarily by men are either increasing in proportion to other causes of mortality for women, or experienced differently by women. Much is linked to hormones, such as estrogen, the changing of hormonal balance such as the time period in between the start of menstruation and the end of menopause, and we do not understand this very well because women’s health experiences have not been well studied.

Q: What are some of the College of Health Solutions’ most promising research and initiatives focused on women’s health?

A: Women’s health is critical to population health because women bear the burden of making most of the health-related decisions for their families.

In the College of Health Solutions, we support research on women’s health across the life span as well as through our Maternal Child Health Translational Research Team, a group of community partners, students and faculty who are working together to address the needs of underserved women, children and families in Arizona.

Some of the many ongoing research projects at the College of Health Solutions that address women’s health include:

We also have community-based initiatives and research into special populations:

Q: Are there additional health challenges that women of color experience? What about the LGBTQ community?

Other minority groups, for example Latinx populations, experience disease differently than majority populations. For example, breast cancer in Hispanic/Latina women often occurs at a younger age than in non-Hispanic white women and often with more aggressive tumors. Black women are more likely to develop aggressive, advanced-stage breast cancer that is diagnosed at a young age.

The same is probably true about LGBTQ community members. While we have seen a great deal of progress in acceptance of LGBTQ individuals, I have not seen much focus on their health, except perhaps for diseases that are perceived to be of higher prevalence in their population, like HIV.

Data shows that COVID-19 has disproportionately impacted populations of color. To some extent, that is because these minority populations have more risk factors. They live in homes that are often closer together with more people per residence and are less likely to seek regular preventive health care, whether it is because they cannot afford it, it is not accessible to them or, even worse, that they are not treated as well as white populations. They are more likely to be essential workers, which means that they are more widely exposed to the general population. And although COVID-19 can kill healthy individuals, in general, people who die are those with other chronic health problems like obesity, heart disease and diabetes.

Q: What’s an area of women’s health that you think has not received much attention but has a great deal of promise as far as research?

A: While it is not my area of research, I believe that we need to learn more about how stress impacts health outcomes for women. During the COVID-19 pandemic, women have taken on so much stress for their families. They are managing the household, helping their children learn online, making sure their families are safe and healthy, and if they are fortunate to have kept their jobs, they are somehow juggling their work responsibilities as well. We know that stress during pregnancy impacts the weight of the baby. We know that stress in parenting leads to poor outcomes in child development, and on and on.