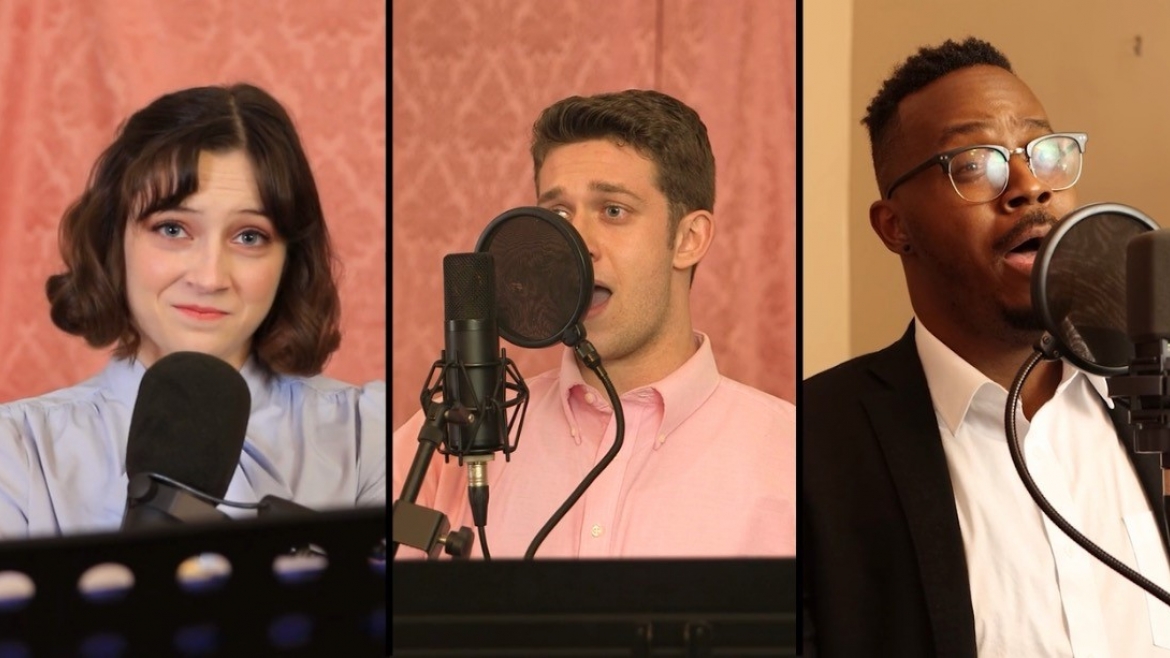 Rehearsing outside in the dark, students bring 'Leading Ladies: a new musical' to life

More than a year ago, two Arizona State University students discovered that they not only shared a passion for musical theater, they also clicked as a creative team.

Over 14 months and one pandemic, they wrote, directed and produced their show, “Leading Ladies: a new musical.” The student-led workshop production can be seen on Zoom through March 14.

Sara Matin and Anthony Procopio met as student workers at ASU Gammage. Matin, who is the librettist, lyricist and director of “Leading Ladies,” graduated in May 2020 with a degree in theater with a concentration in acting and a minor in musical theater production. Procopio, who is the composer and music director of the show, is a junior majoring in music composition, music education and psychology.

The two, who have performed in musical theater in the Valley since childhood, originally envisioned a fully staged production with an audience. When the pandemic ended that plan, they drew on their creativity and persistence to produce “Leading Ladies” as a staged reading.

“Anthony is a composition major and I was a theater major who suddenly found this really big passion for lyric writing in musical theater after I took a course in summer 2019,” Matin said.

So they decided to write a musical together. But they didn’t have a story.

“We had weeks and weeks of meeting in the Memorial Union, getting Pei Wei and waiting for inspiration,” Matin said. 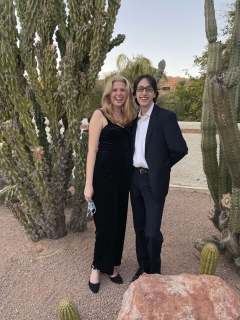 “One day in acting class, I just got the full outline for the plot. I had to half pay attention to class and half write it down.”

“Leading Ladies” takes place in Hollywood in 1957, when movie musicals were at the height of their popularity.

“A studio is producing its first movie musical and is faced with a daunting problem — the leading lady can’t sing. They can’t fire her so instead they hire Ella Lark, a young singer to come in and dub the role,” Procopio said.

“She becomes fast friends with the leading lady, but she can’t tell her she’s dubbing for her. So there’s this secret.

“It’s an exploration of actions and consequences in friendship, and also a love of musical theater.”

They started writing “Leading Ladies” in January 2020, often meeting in a rehearsal room in the Music Building. In March, the COVID-19 pandemic forced the university to switch to remote classes. Building access was restricted and gatherings were prohibited.

“So then we would do Zoom calls for hours a day as we were writing. We would do our individual parts and then write together,” Matin said.

“If I have a melody with a certain number of syllables, I do 'spaghetti lyrics' – random things I see. Then she goes in and adds the character’s lyrics so it lines up with the syllables.

“It worked so well we went through the entire show like that.”

Matin said that many writing teams don’t actually work together.

“We’ve been so intuitive that we have to write with constant feedback from each other,” she said. “We feed into each other’s creative process.”

As the pandemic restrictions lingered into the fall, the team had to think of ways to put on their show other than on a stage.

“We talked about a cast recording, and how you love to listen to your favorite musicals,” Matin said.

“But we worked so hard on the story that we said, let’s add film.” 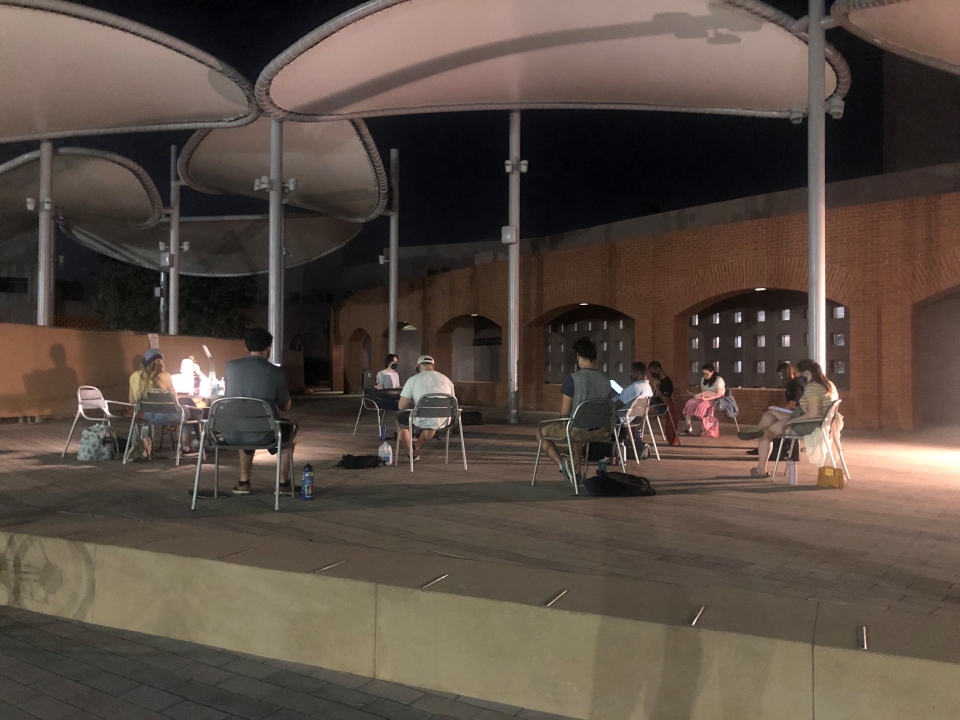 Auditions were done virtually, with performers submitting videos of themselves singing. Call-backs were via Zoom. They chose the cast of 11 actors from about 40 submissions. Nearly everyone in the cast and crew is an ASU student.

Just as they were heading into five weeks of rehearsals, their indoor rehearsal space fell through, Matin said.

“So if we can’t be inside, we’ll go outside. Well it was cold, so we told everyone to bring blankets. Then it was dark, so they had to bring flashlights to read the music,” she said.

The students were masked and distanced outdoors and everyone stayed flexible.

“There was so much joy in finding adaptations,” Procopio said.

The lead actress, Cassie Miller, lives in Tucson. She would attend rehearsal in person for a few days and then attend via Zoom the rest of the time.

“It was a fascinating hybrid way to have rehearsal, with some in the room and some on Zoom. It was a great way to be efficient with our time,” Procopio said.

Then they needed a space to film the staged reading.

“Because no place existed, my parents, as amazing as they are, let us tear apart their house,” Matin said.

“We removed furniture from four rooms and set up a studio in the house. The sound engineer brought in his equipment and the band brought in their instruments.

“We cleared out my sister’s room and that was the drummer’s room.”

Their videographer transformed the house into a miniature sound stage for a few weeks in November. The cast members were filmed doing a staged reading of the show, which includes 27 songs.

“Leading Ladies: a new musical” debuted on Feb. 26. Tickets are $10 each and viewers get a Zoom link.

The Zoom experience creates a “virtual lobby,” Procopio said, and each performance includes a Q&A session with a cast member.

“We wanted to embody as much of a real-life experience as possible,” he said.

The two want to take “Leading Ladies” to the next step.

“We want to do an in-person performance when it’s safe. There are so many things you can’t convey in a staged reading format, like set design and choreography,” said Procopio, who is in Barrett, The Honors College and works as a lead community assistant there.

“When we finish this production, we’ll do revisions. I’m starting to orchestrate for a 32-piece orchestra. I’m working with faculty for, ideally, a spring 2022 production.”

The pandemic restrictions had a silver lining.

“We’ve talked a lot about how if we hadn’t been quarantining and cut off from our social lives, the show wouldn’t have been written as quickly as it was,” Matin said.

Matin, who is 19, got her associate degree in high school and graduated early from ASU. She was offered a job as an assistant producer for an off-Broadway performance of a musical in New York.

“But with COVID, they postponed it. I’ll be heading out there next May,” she said.

“But I honestly think I was meant to be in Arizona producing my own musical. I was able to produce my own work as an artist before producing other people’s work.”

Top image: Three of the cast members perform during the filming of a staged reading of "Leading Ladies: a new musical." From left: Cassie Miller, Teddy Ladley and Tychiko Cox, an opera singer who performs under the name Tychiko. Miller and Ladley are undergraduates and Cox is a doctoral student, all in the Herberger Institute for Design and the Arts. Photo courtesy of Sara Matin

The Devils outchanced the Buckeyes 16-9, but scoreboard shows otherwise in tough series-opening loss ... The Devils outchanced the Buckeyes 16-9, but scoreboard shows otherwise in tough series-opening loss