In May 1968, 14-year-old Michael Polt arrived at New York Harbor via passenger ship after emigrating from Austria with his mother, sister and stepfather. Shortly thereafter, he developed a passion for America, leading to a lifetime career in U.S. international affairs and diplomacy.

For the last eight years, Polt served as senior director at Arizona State University’s McCain Institute in Washington, D.C., where he shared his 35 years of diplomacy knowledge and experience with students and faculty. Now, he is planning for his next role at ASU as the university’s first ambassador-in-residence. 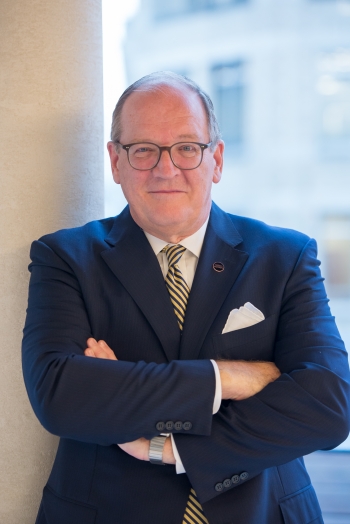 Polt envisions the new role as an interdisciplinary resource accessible to colleges and students across ASU. Based in Washington, D.C., he plans to host virtual office hours to help advise students about career opportunities in international affairs, diplomacy and more. Polt said he will use his background as a U.S. diplomat for countries including Estonia, Serbia and Montenegro, Germany and in Latin America and his personal experiences to help educate students on the importance of foreign affairs and having diverse representation in policymaking.

“It has been unique for me as an immigrant, my passion for America as my adopted country has always been very emotional, very strong,” Polt said. “When the national anthem is played, I get teary-eyed and my American-born wife looks at me and says, ‘What the heck is wrong with you?’ Being an American diplomat was not just a job or a career, but an emotional attachment to the country that made me part of it, rather than looked at me as an outsider.”

Polt shared more about his path to a career in the foreign service as well as his plans for the new ambassador-in-residence role:

Question: How did you decide to pursue a career in diplomacy? Were you influenced by your stepfather’s role as an American diplomat?

Answer: My biological father was a medical doctor, so at first it was assumed I’d become a doctor as well. However, both my family and I forgot that I have zero aptitude for medicine. My first year of college I took pre-med and was really bad at it. I hated the subjects, I hated the whole thing; it really wasn't for me. So I switched by my sophomore year into English, which I loved. Then I went on to graduate school to get my master's in public administration, by that time, of course, my association with my stepfather had incited something that was much more interesting to me: international affairs and diplomacy.

Q: What attracted you to diplomacy?

A: I think the English major relates to this as diplomacy is about communicating to create relationships — about talking, about negotiating, about interacting verbally with individuals in your career. It's about writing, which my English degree helped me with. My natural affinity toward reading, writing and speaking, combined with the other skill sets that you need for diplomacy. Then of course you add that I came to America from Europe and I had this cross-cultural experience, which I always found fascinating, not burdensome. I liked the fact that the world is made up of lots of different people and interacting with a diversity of cultures and people is fun, not difficult or awkward. So the whole thing sort of came together in that regard to make for a good combination.

Q: How did you get connected to ASU and the McCain Institute?

A: During my last assignment as ambassador in Estonia, my good friend Ambassador Kurt Volker was the executive director of the McCain Institute and he came to visit me in Tallinn. We had lunch together and he asked, “What's next for you?” I told him I was retiring from the foreign service because my wife especially had decided it was time to settle in at home after so many years abroad. We dreamt about living in our own house, instead of government quarters, and being close to our family. And after 35 years, I think she earned that right to tell me enough is enough. Volker invited me to join the McCain Institute. I left the foreign service at the end of September 2012 and I joined the McCain Institute on Oct. 1, 2012. So I had one night of vacation.

Q: What has it been like to learn more about ASU and adjust to a role in academia?

A: I started teaching the Policy Design Studio class that I developed at the McCain Institute and I was so impressed by the students, by their focus, by their dedication and by their intelligence. I was impressed by the incredible way that ASU had grown this university into a major research and educational powerhouse. And I was impressed with the charter and paradigm of turning traditional higher learning in America upside down with the New American University concept of defining ourselves by whom we include, not by whom we exclude. I thought this was just the right approach. I was very proud to be part of that.

That class began my journey into making myself into at least an amateur academic, I never tried to assume anything near the mantra of my professional academic colleagues, but thought I could bring something extra, such as the practical background into the learning environment.

Q: What is your goal for the ambassador-in-residence role as a mentor and instructor for students?

A: Right now, U.S. foreign policy and the conduct of U.S. diplomacy is very much an elite enterprise run by people with the kind of background that I have, mostly out of Washington or some of the other major population centers in the United States. However, the people who are affected by U.S. foreign policy and by U.S. diplomacy live all over the country. Some of them who never read a single article about foreign affairs or would not have a lot of connection to international relations, are however affected by foreign policy decisions, sometimes negatively. I think the American people should be connected to our foreign policy process and I want to do my small part to help. I think that being in a major university, like ASU with its very special charter, gives me a unique vantage point to go ahead and make that connection.

I want to work on broadening the diversity of people who participate in U.S. foreign policy development and implementation. I want people who are not traditional stakeholders, who would never think of foreign affairs as a subject of interest, much less a career, and bring them into the foreign affairs process so they can enrich our foreign policy with their different vantage points.

Q: What advice do you have for students considering a similar career path?

A: Diplomacy is about relationships. If you want to be a diplomat or an international interlocutor, in the government or the private sector, you have to like people. If you don't like people don't pursue diplomacy because diplomacy is a people business. It's actually not handled by computers, as some would suggest in this internet age. And it's not handled by briefing papers or official announcements. It's handled by professionals who sit down together to discuss, argue and think through differences and agreements together.

In terms of preparing yourself for being an American diplomat, be the best well-rounded person you can be. We need people who can talk intelligently about everything from nuclear proliferation to classical music, the whole kit and everything in between. That's always my best advice. And know about your culture and history so you can share it with another.

Sun Devil Baseball hosts its first midweek competition against Nevada on Tuesday before welcoming Utah for a three-game non-conference series this weekend, beginning on Friday. ... Sun Devil Baseball hosts its first midweek competition against Nevada on Tuesday before welcoming Utah for a three-game non-conference series this weekend, beginning on Friday.