Onigiri Action, a workshop hosted by the Japanese nonprofit Table For Two, is an annual campaign focused on eliminating world hunger and food insecurity, as well as providing preventative education on health issues such as obesity and diabetes. Through cooking and assembling onigiri, students can learn about how to help themselves make smart dietary choices through the knowledge of cooking. 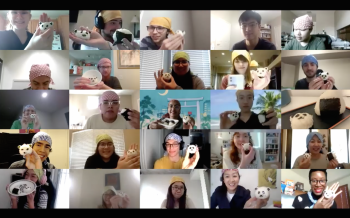 Participants in a recent Onigiri Action workshop, including students from Japanese classes at ASU, display the panda-shaped onigiri they created while learning about Japanese food culture. Download Full Image

Before and during the preparation of the rice balls in the Jan. 26 workshop, the students were taught by Table For Two President Mayumi Uejima-Carr and Lecturer in Japanese Kumiko Hirano Gahan about food insecurity, healthy lifestyle choices and various aspects of Japanese food culture, including the importance of not wasting food, called mottainai.

Students learned the Japanese way of expressing gratitude for a meal and the unseen labor behind the ingredients used, using the term "itadakimasu" before eating. The phrase indicates humility and gratitude when accepting a meal.

Hirano Gahan said Onigiri Action is a way for students to explore Japanese culture on a deeper level while picking up healthier lifestyle habits.

“Learning about how to eat well starts (with this workshop),” Hirano Gahan said. “The ultimate goal for everybody is to live better. … I believe this experience will encourage students to learn more about diet and Japanese food culture.”

Table For Two’s campaigns are global and primarily work to raise funds for school meals. The Onigiri Action workshop and its related campaign began in 2015. For every photo posted to social media centering around a rice ball, five school meals are sponsored by donors and given to children in need.

Sponsors for the campaign vary, with notable partners in 2019 being Nissan; Aeon, a Japanese retail company; and Nishiki, a rice brand.

The workshop’s meal kits at ASU were paid for by the Japanese Ministry of Agriculture, Forestry and Fisheries and the Japan External Trade Organization, or JETRO. They contained an array of ingredients and tools students used during the class period to make the onigiri. The ingredients included instant microwaveable rice, canned tuna, Japanese mayonnaise and sheets of nori — dried seaweed used for the exterior of the rice balls. The kits also held a "tenugui" — a hand towel meant to hold students’ hair back — and rice presses that helped shape the rice into the shape of a panda. 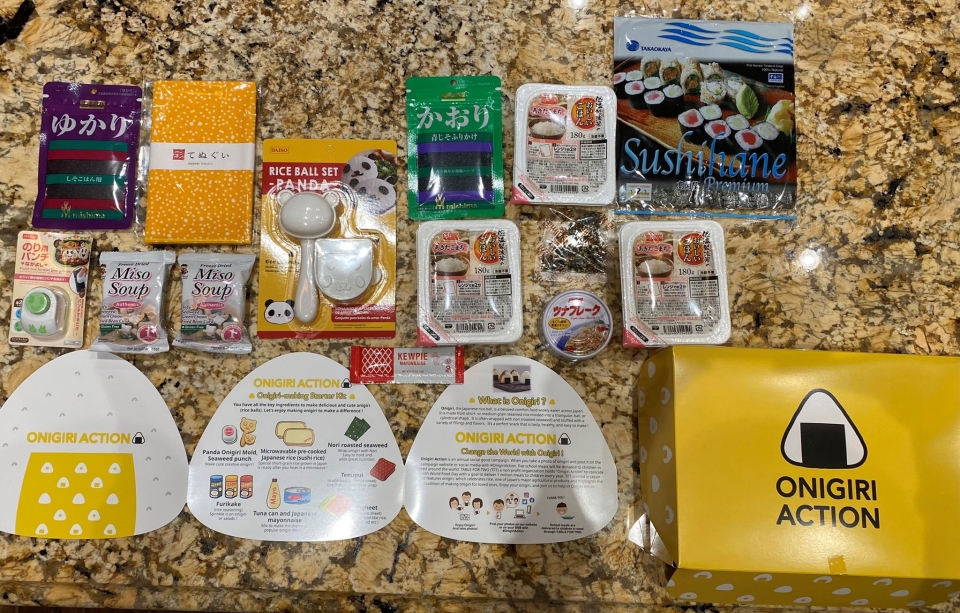 The workshop’s meal kits contained an array of ingredients and tools students used during the class period to make the onigiri. The ingredients included instant microwaveable rice, canned tuna, Japanese mayonnaise and sheets of nori (dried seaweed) used for the exterior of the rice balls. The kits also held a tenugui — a hand towel meant to hold students’ hair back — and rice presses that helped shape the rice into the shape of a panda.

Osamu Taki, the chief executive director of JETRO, decided to sponsor the workshop after attending an event focusing on eliminating world hunger. He said the program is significant because it allows participants to express their creative side through onigiri.

The instant rice was supplied by Iris Ohyama, a rice company headquartered in Japan’s Tohoku region that also operates a factory in Arizona. Two years after a 2011 earthquake and typhoon rocked the region, Iris Ohyama entered the industry to support the reconstruction efforts within the city. The rice company’s product being a part of the Onigiri Action workshop is relevant to Table for Two’s message, Taki said.

“I would like for the participants at Arizona State University to share Japanese companies like them (that) have supported the reconstruction of Japan since the disaster,” Taki said. Additionally, Taki said he believes studying Japan’s food culture is important because it represents the nation’s “history, health, culture and locality.”

Hirano Gahan said that amid the pandemic, some students are struggling with loss of income or are unable to access sufficient nutritious meals. She said that because onigiri is simple and relatively inexpensive to make, the workshop could help ASU students discover more cheap yet delicious food options.

“When students look at onigiri, they may think, ‘Wow, that’s just not in my range, to be able to cook or provide that to others,’ but once you actually have that hands-on experience, it becomes ‘Now I know,’” she said.

“Even in our current limited environment, we can still work on something together, which benefits participants and contributes to students in need of food,” Hirano Gahan said. “We don’t have to feel doomed in this world and do nothing. We can still carry on something that is meaningful for yourself and others.”

Written by Kaylin Dunnett, student in the Walter Cronkite School of Journalism and Mass Communication.

and the Sun Devils head to Houston for matchups against Shockers, Owls ... and the Sun Devils head to Houston for matchups against Shockers, Owls