United States Air Force Capt. Kyle McKelvey was injured severely in 2014, nearly ending his military career. The injury motivated him to explore other career options. McKelvey decided to pursue a career in dentistry.

“A friend who is an emergency-room doctor told me about a medical-missions trip he had participated in,” McKelvey said. “The busiest person there was the dentist. I then realized how undervalued but important dental care truly is.” 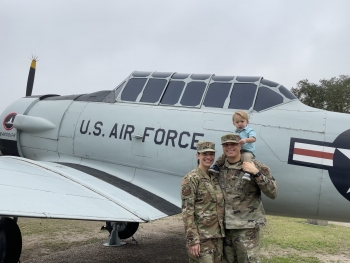 McKelvey fell in love with the idea of helping people through dentistry. However, he could not immediately apply to dental school.

McKelvey had earned a bachelor’s degree in public administration in 2016, and in 2019, a master’s degree in organizational leadership. To apply to Case Western Reserve University School of Dentistry, his top choice, he needed to complete some prerequisite science classes and pass the challenging Dental Admissions Test. While still on active duty, he enrolled in Arizona State University's School of Molecular Sciences because it offered a rigorous online degree program.

“The coursework is designed to develop your ability to think, rather than just memorize information, which was very appealing to me,” recalled McKelvey.

Doing online school, however, came with some challenges — he had never failed an exam until he took second-semester general chemistry. McKelvey considered dropping the course, but Gary Cabirac, who taught the class, encouraged him: “You have more than enough time to recover as long as you're willing to put in the work,” Cabirac told him. Passing that class became one of the most hard-fought victories of McKelvey’s academic career.

After completing additional prerequisites at the School of Molecular Sciences, McKelvey passed the Dental Admissions Test. Although getting into the medical school of his dreams was harder than expected, because of his perseverance and a strong dedication to get into the dentist program, McKelvey was successful. He will be attending the prestigious Case Western Reserve University School of Dentistry in Cleveland, Ohio, which has an acceptance rate of less than 5%.

Ara Austin, managing director of online programs and one of McKelvey's professors, said, “Kyle is the first person in his family to graduate from college. I am extremely proud of Kyle; he put forth a great amount of effort to complete his program at ASU while juggling family and work responsibilities. I know Kyle's top dental school was attending Case Western Reserve University, and I'm excited that he was able to accomplish this big milestone for himself and his family.”

McKelvey currently lives in San Antonio, Texas, with his wife, Darla, and son, Kaleb. He acknowledges that he is “passionate about being a husband and father and serving my country. I absolutely love what I do as I am a part of something bigger than myself.”

ASU's 23 goals in game two ties the record for third-most goals scored in a game in program history. ... ASU's 23 goals in game two ties the record for third-most goals scored in a game in program history.