2020 was a year of upheaval that brought attention to a wide range of areas in social injustice and inequity, from the Black Lives Matter and LGBTQ+ movements to inequities in access to health care to the rise of overt white supremacist groups.

Reflecting on these events inspired Arizona State University School of Molecular Sciences assistant professors Laura Ackerman-Biegasiewicz and Kyle Biegasiewicz to look inward at their own spheres of influence and examine sources of injustice and inequity in academia. Together with nine other junior faculty from different institutions across North America, their perspectives and suggestions to promote changes in academic culture to improve diversity, equity and inclusion were recently published as an editorial in the American Chemical Society journal ACS Central Science. 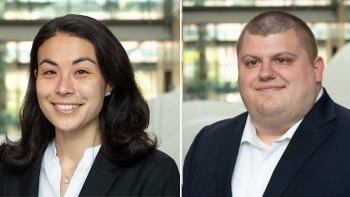 In their editorial, the group approached the problem from an interesting and uniquely chemical perspective, that of retrosynthetic analysis. Retrosynthesis involves deconstruction of a desired target molecule into simpler starting structures and a convergent chemical pathway that connects them with the more complex target structure. The group suggests an analogous approach, decomposing diversity and inclusion into basic starting principles in order to define a guiding convergent social pathway toward a resolution to these complex societal issues.

The authors all pledged to make changes in support of developing a model where academia demonstrates leadership through practice in the very principles of diversity, equity and inclusion that it teaches.

“Many of us have been victims of the destructive norms that pervade our field; all of us have witnessed them in practice,” Ackerman-Biegasiewicz said.

Instead of accepting this as the norm, they talked about what they can do to make positive, meaningful changes based on the goals they would like to achieve. Ultimately, the desire is to create supportive learning communities that are vital to growing and retaining a healthy, diverse research group.

The group suggest increasing awareness, improving approachability (of organic chemistry), teaching inclusively, providing both mentorship and sponsorship, and building community as starting principles for such model-building. Implementing meaningful change to embedded social structures is potentially an overwhelming task, but the value in the group’s approach is that it identifies realistic and readily accessible starting points that can be worked on today and that can be connected to a viable pathway to change.

“Our junior faculty are bringing to the school a raised awareness of the exclusionary and hegemonic nature of traditional science culture, and a determination to make meaningful change that is inspiring,” said Ian Gould, School of Molecular Sciences interim director. “I am proud of the way that Laura and Kyle are leading the charge towards a more inclusive and equitable environment for our school and our discipline.”

“We are committing to building research groups founded on mutual respect between professors and graduate students, emphasizing compassion and mental and physical health,” Biegasiewicz said.

Graduate students are often expected to work long hours and sacrifice relationships and at times their health under the pressure of their research advisers.

Women with families and low-income students are particularly impacted by traditional constraints. Graduate students are sometimes advised that even their relationships must take a back seat to their research and their career.

“As a couple, we were advised multiple times to go our separate ways so we could focus on our research and our careers separately,” Ackerman-Biegasiewicz said. “We ignored that advice and worked harder to build our careers together.”

“Change begins with us,” Biegasiewicz said. “We don’t have to repeat the same steps over and over. We can look back and create new pathways to a better future.”

Now that the US rejoined the Paris Agreement, what's next?

Under the worst climate change scenarios, American cities, beginning with Miami, are already experiencing rising seawater levels that mirror Ernest Hemingway’s warning about bankruptcy: “At first you go bankrupt slowly, then all at once.”The Paris Agreement, adopted in 2016 and now with 195 signatories, had aimed to avert climate catastrophe by keeping long-term global temperature increases ... Now that the US rejoined the Paris Agreement, what's next?

Under the worst climate change scenarios, American cities, beginning with Miami, are already experiencing rising seawater levels that mirror Ernest Hemingway’s warning about bankruptcy: “At first you go bankrupt slowly, then all at once.”

The Paris Agreement, adopted in 2016 and now with 195 signatories, had aimed to avert climate catastrophe by keeping long-term global temperature increases below 2 degrees Celsius compared to preindustrial levels. And on Jan. 20, 2021, as one of his first acts in office, President Joe Biden signed an executive action that set the United States on the path to rejoining the Paris climate agreement. But Paris is just the beginning.

“We need to show that there is a viable path to both having a strong economy and fighting climate change at the same time,” said Simoe Athayde, an associate professor at Florida International University (FIU) and an environmental anthropologist. “The challenge to governments all over the world is to show their citizens that that is possible.”

Athayde was one of the many experts brought together for this February’s annual State of the World conference, a two-day event on global relations and U.S. foreign policy featuring world leaders and policymakers, and co-hosted by Miami’s Florida International University and ASU’s McCain Institute for International Leadership.

Environmental policy specialists are cautiously optimistic about working with Biden and the new administration to make progress in solving the climate crisis.

“We’re going to be getting a lot more federal support now,” said Kevin Grove, an associate professor of geography at FIU and editor-in-chief of “Political Geography.” “Federal support was simply rolled back or not present in previous administrations. We’re going to see new support that’s going to come in and dovetail with work already underway that was started by NGOs and others who understood that the climate crisis was too important to wait for help from Washington.”

While rejoining the Paris climate agreement was an important and necessary step to reducing climate change’s effects in the United States, it was the first step on a long road toward ensuring a sustainable future.

The climate crisis is also, in many respects, intersecting with the growth of a new, prosperous global middle class and increasing demand for consumer goods, and governments will need to consider innovative policy solutions that preserve newfound wealth while also protecting the environment.

“For us to actually be successful in combating climate change, we need to fundamentally rethink the majority of our solutions. We need to think about how we are replacing and transforming technologies, products, supply chains and sectors,” said Alex Dehgan, professor of sustainability at ASU and CEO and co-founder of Conservation X Labs. “That means, as we have a world that is growing warmer, we also have more people moving in middle class, who want cooling technology, protein, food, feed, fiberm and materials, and electronics that are driving the destruction of places like the Amazon. We need to think about what it means to create new economies for the future.”

Building these economies of the future will require a broad shift in how policymakers and others think about economic issues — and the environmental impact of economic decisions.

“What we really need to start seeing is that bigger system approach. It’s not just about Paris. We need to stop thinking about the environment and the economy as two separate issues,” said Michael Heithaus, dean of FIU’s College of Arts Science and Education. “The economy is actually this subset of the broader environmental issue.”

Some local communities around the world, such as Miami, are already taking successful steps at the local level to work through these issues. In these places, there has been an important turn in recent years toward focusing on resilience and providing an opportunity to engage community organizations in policymaking and in delivering new kinds of public services.

“This is a real opportunity to redefine what a response to climate change might entail,” Grove said of Miami’s conservation efforts. “It’s an opportunity to bring in new kinds of issues, deliver new kinds of services to communities that have long been excluded. Climate change is kind of a slow emergency that we're all starting to wake up to more and more.”

The COVID-19 pandemic has also provided a unique opportunity to improve climate change issues. According to a study by the National Center for Biotechnology Information, movement restrictions caused by COVID-19 have led to a significant slowdown of social and economic activities, resulting in an improvement in air quality and a reduction in water pollution.

“I feel that the pandemic has elevated climate change as something that we need to address as a society,” Dehgan said. “But I am also worried that we will forget once again, and then only deal with it when we are in the middle of a crisis.”