Last month, the world watched as the U.S. Capitol was stormed by rioters seeking to block the certification of the 2020 presidential election.

On Feb. 11, a panel of faculty from Arizona State University’s School of Politics and Global Studies met to discuss the causes and consequences of the Jan. 6 Capitol insurrection and the rise of antidemocratic violence in the U.S. 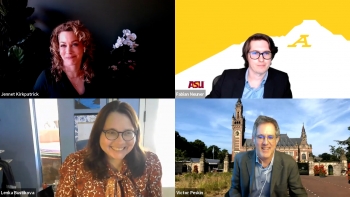 ASU professors during the roundtable event "The Rise in Anti-Democratic Violence in the U.S.: Perspectives on the Capitol Insurrection." Download Full Image

The roundtable event was part of a lecture series from the School of Politics and Global Studies exploring antidemocratic violence.

Bustikova, who studies comparative politics, spoke about the recent rise in far-right parties — a topic that she recently covered in her book "Extreme Reactions: Radical Right Mobilization in Eastern Europe."

Although groups like QAnon are specific to the United States, Bustikova points out that it falls under a global conspiracy theory.

“In the past few years, we have seen the far-right extreme emboldened in both the United States and in Europe,” said Bustikova. “There are many aspects to these movements, but they certainly express anger against the so-called political establishment.”

Kirkpatrick, who is a political theorist, used examples from her book “UnCivil Disobedience: Studies in Violence and Democratic Politics” to provide a historical and theoretical perspective on the insurrection.

“Mob violence has a long history in the United States,” said Kirkpatrick. “Although we might not like it, it is who we are.”

Reactions and statements to Jan. 6 from politicians regarded the events as un-American and antidemocratic. Kirkpatrick explains that this attack did not match the commentors’ ideal version of America and democracy.

“It is essential to understand the role of democratic ideals in mob violence. The mobs’ view of ‘true democracy’ is not the only ideal of democracy out there,” she said. “America has a long and well-established tradition of constitutional democracy — which can be understood as a competing ideal of democracy.”

Neuner, a political psychology expert, notes that we should not view this as an isolated event. He states that it is important to view antidemocratic and antipartisan attitudes together and how those lead to action.

“The big part there is this idea of elite rhetoric,” said Neuner, “and what can trigger these attitudes, not just being latent, but actually leading to potentially violence.”

“We also have different motivations about why people were sustaining this,” said Neuner. “Was it just because people were upset with losing the election and were trying to rationalize it, or is it part of a bigger political movement where talking about election fraud allows you to enact some antidemocratic reforms?”

The latter half of the event focused on answering questions from the audience, leading to discussions on what is next for democracy in America. Is this a refounding moment? How do we bring people together?

Watch the full event below. The next event in the lecture series from the School of Politics and Global Studies will feature a conversation with former Sen. Jeff Flake, Distinguished Dean Fellow of The College of Liberal Arts and Sciences, on “Extremism, Antidemocratic Violence, and the Second Impeachment Trial.”