The melting of this dusty water ice could have led to the formation of gullies that have eroded into rock and ice at these locations and may provide places for any surviving life to exist on Mars. The results of their findings have been recently published in AGU’s Journal of Geophysical Research: Planets. 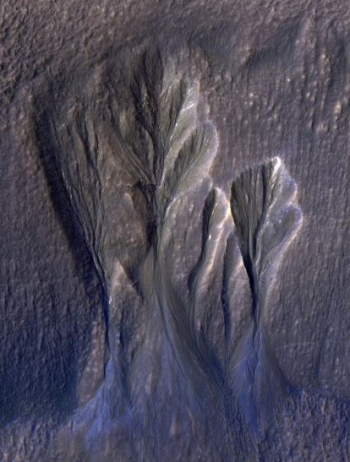 “We’ve known that Mars has water ice for a while,” said lead author Khuller, who is a graduate student at ASU’s School of Earth and Space Exploration. “But this is the first time we’ve seen it this close to the equator at places where it might be melting.”

Almost two decades ago, Christensen, a Regents Professor at ASU, noticed smooth deposits that looked like snow-packs blanketed by dirt on gullied slopes. These observations led Christensen to propose that the gullies formed by dusty snowmelt. This theory was backed by computer simulations showing that snow on Mars melts only when it is dusty.

When Khuller began analyzing new, high-resolution images of the gullies that Christensen had studied, he observed a notable change.

Observing this, Khuller set about expanding his analysis and found even more of the places where the light-toned deposits were visible. 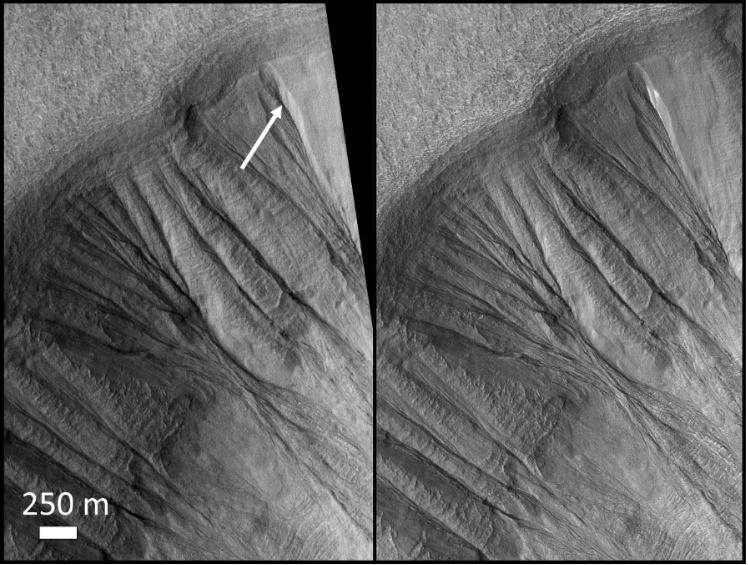 (Left) Low-resolution image used by Christensen (2003), with a remnant of the snow mantle (arrow) proposed to be the source of water that eroded these gullies. Credit: NASA/JPL/Malin Space Science Systems. (Right) New high-resolution image of the same location about 10 years later, where Khuller and Christensen believe that dusty water ice is being exposed, and potentially melting. Credit: NASA/JPL/University of Arizona

For his observations, Khuller used a geospatial information system called Java Mission-planning and Analysis for Remote Sensing (JMARS), which was developed by ASU's Mars Space Flight Facility. This award-winning system, which is available to the public, provides mission planning and data-analysis tools for NASA scientists, instrument team members and students of all ages.

Based on the brightness of the deposits, Khuller and Christensen determined that they must be dusty water ice (which has the appearance of what dirty snow looks like on Earth) because it is unlikely for short-term localized dust deposits to form only within the smooth deposits. In addition, the locations of these deposits are too warm for the ice to be water frost.

This discovery could help scientists narrow down places on Mars that might host life, because small amounts of liquid water might be produced within these water ice deposits in the summertime. And, because they are closer to the equator, the locations are also warmer, so astronauts in the future might be able to access them more easily — even with just a shovel.

“For decades, scientists have been looking for places on Mars where there could be water,” said Khuller. “We believe that these dusty ice deposits are the best candidates to look for small amounts of shallow liquid water, and therefore potentially ideal locations for any surviving life on Mars.”

Khuller and Christensen plan to develop new computer simulations of how this water ice changes with time, and they will continue to document more locations with exposed ice so that future Mars missions could potentially target them.

Alex Taylor, president and CEO of Cox Enterprises, Inc., will speak at an Economic Club of Phoenix virtual event on Thursday, Feb. 18, from noon to 1 p.m. The public is invited to attend the free event that will be hosted live on Zoom by Arizona State University’s W. P. Carey School of Business.Taylor serves as vice chairman of Cox Enterprises’ board of directors and has held numerous posi...

Alex Taylor will speak at the Economic Club of Phoenix virtual event on Feb. 18

Alex Taylor, president and CEO of Cox Enterprises, Inc., will speak at an Economic Club of Phoenix virtual event on Thursday, Feb. 18, from noon to 1 p.m. The public is invited to attend the free event that will be hosted live on Zoom by Arizona State University’s W. P. Carey School of Business.

Taylor serves as vice chairman of Cox Enterprises’ board of directors and has held numerous positions across the company during his 21-year career at Cox. As chief operating officer of Cox Enterprises, Inc., he oversaw its long-term growth and investment plans and its major subsidiaries: Cox Communications, Cox Automotive and Cox Media Group. Prior to this, he served as senior vice president of field operations for Cox Communications and executive vice president of Cox Media Group, where he oversaw television, radio, newspaper, and digital properties, and led the creation of the company’s first cross-platform newsroom. 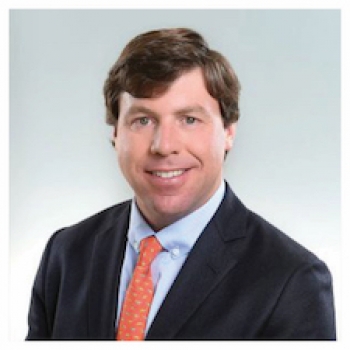 Giving back and serving local communities is at the heart of the Cox culture. Taylor serves as a board member of the Food Well Alliance, Atlanta Committee for Progress, and PATH Foundation. He’s also a member of the Carter Center Board of Councilors and on the Vanderbilt Board of Trust.

Cox Enterprises, Inc., is a multigenerational family business that started in newspapers and has grown into a leader in the broadband, automotive services, and media industries. With nearly 50,000 employees in the United States and abroad, Cox serves millions of customers every day.

To register for this event and for more information about the ECP and its speaker series, visit econclubphx.org.