Humans are unusual because we cooperate with each other in ways that other animals do not. Cooperation can be a messy venture, with many strategies in play because individuals are prone to self-serving actions. Humans seem better able to solve these problems, but it is not certain why.

Arizona State University researchers Sarah Mathew and Robert Boyd have published new research in Nature Human Behaviour that puts forth a new explanation for why reciprocity plays a prominent role in human cooperation and why it is so rare in other animals.

It has to do with adjudication by third-party observers to help resolve errors in perception — disagreements between social partners about what transpired. In human life, it is not just the fact that someone has been wronged, but potentially, the fact that the person feels like they have been wronged, even though they have not.

Mathew and Boyd designed a new strategy — “ATFT” or “arbitration tit-for-tat” that was studied using evolutionary game theory. It seeks the opinion of a third-party “arbitrator” when partners have a misunderstanding. They show that ATFT can persist and perform well against different existing reciprocity strategies. ATFT is notably better than current strategies at sustaining cooperation when disagreements are common occurrences.

Existing theory indicates that behavioral errors undermine reciprocity because it leads to continuing misunderstanding and recrimination. By relying on a public, third-party opinion to align both players’ beliefs, cooperation is reestablished during game play, even when arbitration errors frequently arise.

In other animals, evidence for reciprocity is sparse, though many species live in social groups, interact repeatedly over time and seem to have the cognitive ability to adjust their current behavior on another’s past actions. This is precisely the conditions that should favor reciprocity, but there is no avenue for remedying errors in perception.

Human reciprocity differs from that of other species because people live in societies regulated by shared, culturally transmitted moral norms.

“In small-scale village societies, people are intensely interested in, and aware of, each other’s affairs and help to mediate interpersonal conflict and adjudicate disputes between well-known individuals,” said Mathew, a research affiliate with the Institute of Human Origins and an associate professor in the School of Human Evolution and Social Change.

Their research notes evidence from “group talking” among the Ju/’hoansi (!KungA member of a people of southern Africa —usually preceded in writing by ! (via Merriam Webster)) foragers of Botswana, community discussion among Turkana pastoralists on who have violated norms, and discussion around kava drinking sessions in Fijian villages to lay out motives, opinions and interpretations of the conflicts.

“Humans are a different kind of animal because we depend on nongenetic, cultural inheritance. Cultural evolution is much faster than genetic evolution, and this allows human populations to evolve solutions to local environments,” said Boyd, a research affiliate with the Institute of Human Origins and professor in the School of Human Evolution and Social Change.

These cooperative strategies use judgments that allow reciprocity to evolve and persist even when errors are quite common and the judgments are inaccurate, giving rise to qualitatively novel — and distinctly human — kinds of social behavior.

This research was published as “Arbitration supports reciprocity when there are frequent perception errors,” in Nature: Human Behavior, Robert Boyd and Sarah Mathew.

It may not always seem so, but scientists are convinced that humans are unusually cooperative.Unlike other animals, we cooperate not just with kith and kin, but also with genetically unrelated strangers. Consider how often we rely on the good behavior of acquaintances and strangers — from the life-saving services of firefighters and nurses, to mundane activities like our morning commute and queu...

It may not always seem so, but scientists are convinced that humans are unusually cooperative.

Unlike other animals, we cooperate not just with kith and kin, but also with genetically unrelated strangers. Consider how often we rely on the good behavior of acquaintances and strangers — from the life-saving services of firefighters and nurses, to mundane activities like our morning commute and queueing at the airport check-in counter. Of course, we encounter people who cheat, disregard the welfare of others and engage in cronyism and nepotism. But we tend to perceive these behaviors as deviant, whereas in most animal societies these behaviors are the gold standard.

The hotly contested issue is why we are the famed cooperators of the animal kingdom. The answer is thought to be some characteristic that is exaggerated in humans compared to other animals: language, intelligence, culture, large-game hunting or our very needy children. Teasing apart how these traits influenced the evolution of cooperation has been challenging and has led to a proliferation of theories — and acrimonious debates — that emphasize one or other of these characteristics.

A study by Arizona State University researchers Carla Handley and Sarah Mathew published in Nature Communications provides some insight on this issue by pinpointing how culture may have fueled our capacity to cooperate with strangers.

The researchers empirically tested — and confirmed — predictions of a controversial theory referred to as cultural group selection theory. The idea is that culturally different groups compete, causing the spread of traits that give groups a competitive edge. Cooperation is exactly such a trait — costly for individuals, but advantageous for groups. Handley was a postdoctoral researcher with ASU at the time of study, and Mathew is assistant professor in the School of Human Evolution and Social Change and research affiliate with the Institute of Human Origins.

During the second half of the 20th century, biologists famously discredited the idea that selection could act on groups. They found that, typically, groups are not different enough from each other for selection to act on. Because individuals migrate, over time migration makes the composition of groups similar. Group-beneficial behaviors like cooperation therefore lose out.

The above concern may not apply, however, for behaviors that are culturally, rather than genetically, transmitted. When people migrate, they can, through social learning, culturally acquire the behaviors that are popular in their new surrounding. Thus, cultural groups can remain different, even if people move a lot. This means that selection can act on groups, and group-beneficial behaviors like cooperation can flourish.

"People have the intuition that being cultural helps us cooperate. What we are showing is that culture allows groups to be different and, therefore, to compete. It is this group competition — ironically — that sculpted our cooperativity,” said Mathew.

To evaluate this theory, Handley and Mathew examined cultural variation and cooperation among Kenyan pastoralists. They sampled 759 individuals from nine clans spanning four ethnic groups — the Borana, Rendille, Samburu and Turkana — all of who practice semi-nomadic subsistence pastoralism in the arid savanna of northern Kenya. These groups compete intensively among each other for pasture, dry-season water wells and livestock, including through lethal cattle raids. The researchers found that, as predicted, cultural practices and beliefs were substantially variable between populations. Ten percent to 20% of the observed cultural variation was between competing groups. In contrast, typically less than 1% of genetic variation is between groups. This indicated that there is potential for cultural group selection to occur. 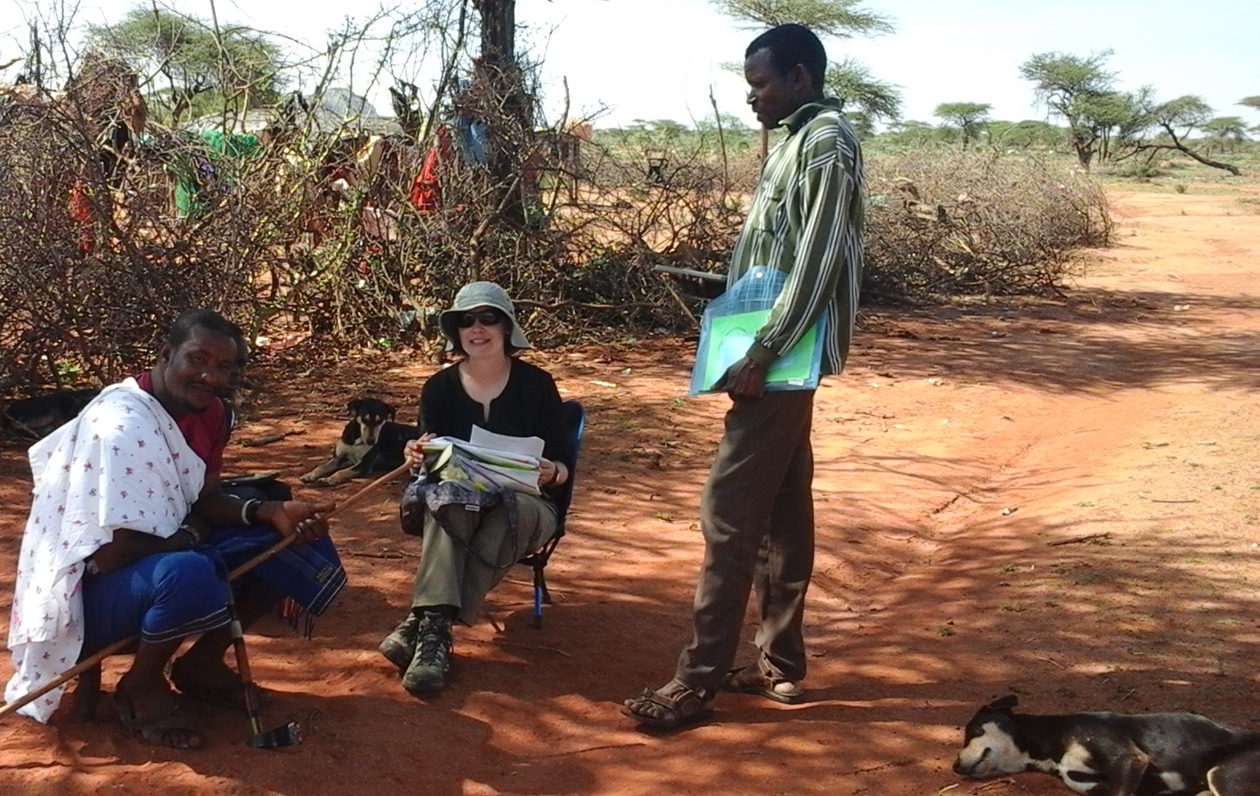 Next, they examined who people cooperate with and found that cooperation is indeed directed toward cultural ingroup members. People feel obliged to cooperate with strangers, as long as they share their cultural values, beliefs and norms with those people. Such culturally parochial cooperation is to be expected if competition between cultural groups influenced the evolution of cooperation.

“This study is unique as an empirical field test of cultural group selection by examining how cooperation operates between and within four distinct ethnolinguistic groups,” Handley said. “Taking a step back, it may also contribute to a reframing of conflict discourse in small-scale societies where cooperative action has been severely underrepresented and ‘illegitimate’ violence is regarded as the status quo.”

The findings caution that although humans are hypercooperative, our evolved cooperative dispositions are still limited in their scale, thus proving challenging for solving global-scale problems. Innovative thinking is necessary if we are to save ourselves from climate change, pandemics, or — who knows? — aliens.