The open ocean is a harsh place for newborn fishes. From the minute larvae hatch from their eggs, their survival depends upon finding food and navigating ocean currents to their adult habitats — all while avoiding predators. This harrowing journey from egg to home has long been a mystery, until now.

An international team including scientists from the Arizona State University Center for Global Discovery and Conservation Science (GDCS), NOAA’s Pacific Islands Fisheries Science Center, and the University of Hawaii at Mānoa have discovered a diverse array of young marine animals finding refuge within so-called "surface slicks" in Hawaii. Surface slicks create a superhighway of nursery habitat for more than 100 species of commercially and ecologically important fishes, such as mahi-mahi, jacks and billfish. The study was published Feb. 4 in the journal Scientific Reports. 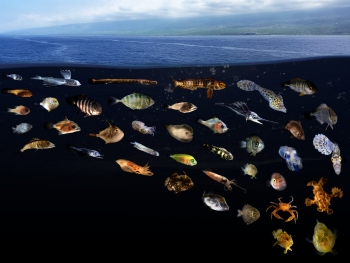 Surface slicks are naturally occurring ribbon-like bands of smooth water at the ocean surface and have long been recognized as an important part of the seascape. To unravel their secrets, the research team conducted more than 130 plankton net tows inside the surface slicks and surrounding waters along the leeward coast of the Island of Hawaii, while studying ocean properties. In these areas, they searched for larvae and other plankton that live close to the surface. They then combined those in-water surveys with a new satellite-based technique to map the location of the slicks. This technique involved using more than 100 shoebox-sized satellites, built and operated by GDCS partner Planet, to discern textural sea surface differences between surface slicks and regular seawater.

“In an earlier study, our surface slick mapping suggested strong along-coast connectivity of ocean habitats. In our latest study reported here, we populated those satellite-based slick maps with the billions of animals, organic debris and microplastics that make up the slicks," said Greg Asner, GDCS director and co-author of the study.

Though the slicks only covered around 8% of the ocean surface in the 380-square-mile-study area, they contained an astounding 39% of the study area's surface-dwelling larval fish; over 25% of its zooplankton, and 75% of its floating organic debris, such as feathers and leaves. Larval fish densities in surface slicks off west Hawaii were, on average, over 7 times higher than densities in the surrounding waters.

The study showed that surface slicks function as a nursery habitat for marine larvae of at least 112 species of commercially and ecologically important fishes, as well as many other animals. These include coral reef fishes, such as jacks, triggerfish, and goatfish; pelagic predators, for example, mahi-mahi; deep-water fishes, such as lanternfish; and various invertebrates, such as snails, crabs and shrimp.

The remarkable diversity of fishes found in slick nurseries represents nearly 10% of all fish species recorded in Hawaii. The total number of taxa in the slicks was twice that found in the surrounding surface waters, and many fish taxa were between 10 and 100 times more abundant in slicks.

“We were shocked to find larvae of so many species, and even entire families of fishes, that were only found in surface slicks,” said Jonathan Whitney, a research marine ecologist for NOAA and lead author of the study. “The fact that surface slicks host such a large proportion of larvae, along with the resources they need to survive, tells us they are critical for the replenishment of adult fish populations,” he added.

"Our findings are part of an important story forming around the role of biological surface slicks in maintaining coral reefs. The sheer biodiversity and biomass of the slicks, combined with their oceanic movement along the shore, form a superhighway for species that connects and effectively generates an interconnected, regional reef ecosystem," Asner said.

While slicks may seem like havens for all tiny marine animals, there's a hidden hazard lurking in these ocean oases: plastic debris. Within the study area, 95% of the plastic debris collected into slicks, compared with 75% of the floating organic debris. Larvae may get some shelter from plastic debris, but it comes at the cost of chemical exposure and incidental ingestion.

In certain areas, slicks can be dominant surface features, and the new research shows these conspicuous phenomena hold more ecological value than meets the eye.

"Our work illustrates how these oceanic features (and animals’ behavioral attraction to them) impact the entire surface community, with implications for the replenishment of adults that are important to humans for fisheries, recreation and other ecosystem services," said Margaret McManus, co-author, professor and chair of the Department of Oceanography at the University of Hawaii at Mānoa. “These findings will have a broad impact, changing the way we think about oceanic features as pelagic nurseries for ocean fishes and invertebrates.”

Top-20 Matchup On Deck For Gym Devils This Saturday

The second of two-straight meets in Tempe, No. 16 Sun Devil Gymnastics will host No. 3 Utah this Saturday at 1 p.m. MST at Desert Financial Arena. ...

Top-20 Matchup On Deck For Gym Devils This Saturday The second of two-straight meets in Tempe, No. 16 Sun Devil Gymnastics will host No. 3 Utah this Saturday at 1 p.m. MST at Desert Financial Arena.