Donors gave about $70 million over the past 10 years to expand Watts College of Public Service and Community Solutions’ programs, support its students, increase its research impact and drive its community service. 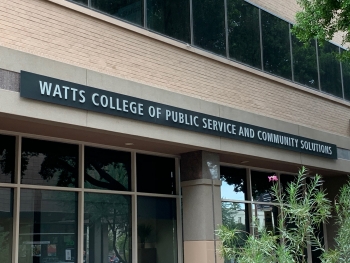 The college fundraising total’s largest component was Mike and Cindy Watts’ 2018 gift of $30 million to the college that now bears their last name.

The Watts investment will have tremendous and long-lasting impact on the futures of hundreds of students; the research, teaching and service of dozens of faculty members; and the improved lives of thousands of residents of the community beyond Arizona State University’s campuses.

Though they differed in amounts, monetary and in-kind gifts to the Watts College throughout the campaign were made with the same aim: to help the college fulfill its mission to “be the solution” to society’s many challenges and thus make the world a better place. According to Ingram, many of the donations over the decade totaled less than $100 apiece – but the collective impact was significant.

Here are a few highlights of Watts College-based programs supported by the last 10 years of giving:

Material for summaries of supported programs is from earlier stories by Mark Scarp of Watts College, Marshall Terrill of ASU Now and Jane Lee of ASU Enterprise Partners.

Editor's note: This story is part of a series of profiles of notable spring 2021 graduates.Retired movie producer Mark Wolfe didn’t always want to pursue a career in the filmmaking industry. From a young age he wanted to become a doctor, but everything changed when he was 16 years old. “The local TV station decided to come and do a documentary film at my high school. They asked for voluntee...

Retired movie producer Mark Wolfe didn’t always want to pursue a career in the filmmaking industry. From a young age he wanted to become a doctor, but everything changed when he was 16 years old. This spring, retired movie producer Mark Wolfe will receive his master’s degree in advanced study in film and media from The College of Liberal Arts and Sciences at Arizona State University. Download Full Image

“The local TV station decided to come and do a documentary film at my high school. They asked for volunteers to intern on the set and those selected would get to miss three days of classes. So I raised my hand,” Wolfe said. “The first day we filmed 14 hours and it was life-changing. I went home and told my mom, ‘I don't want to be a doctor. I want to be a movie producer.’”

After earning his bachelor’s degree in communication, film and television production from the University of Texas at Austin in 1984, Wolfe did exactly that, working on well-known films including “Terminator 3: Rise of the Machines,” “Fargo,” “Notting Hill” and “The Usual Suspects.”

For 35 years, Wolfe continued to work in filmmaking. Now, he’s taking on his third act — earning his master’s degree and becoming an educator.

This spring, Wolfe will receive his master’s degree of advanced study in film and media studies from The College of Liberal Arts and Sciences at Arizona State University. Afterward, he hopes to combine his real-world experience with his newly acquired knowledge to teach the next generation of filmmakers.

“Getting a master's degree is an important part of furthering the academic side of my education,” he said. “I have a tremendous amount of practical education as I’ve worked in the business forever, but there's a lot of academia associated with the film industry, everything from research to theory, and that's really fascinating to me and important to learn.”

Wolfe said as filmmaking continues to evolve with technology and with other challenges due to COVID-19, he believes storytelling will always persist and he’s eager to see what's next.

“People who want to tell stories, they're doing it for a reason,” he said. “They want to present a common theme of humanity that resonates with at least one other person and hopefully millions upon millions of people. Therefore it's irrelevant the medium, and it's always been irrelevant. We're changing now because of COVID. Who knows what's going to happen to movie theaters. But the desire and need to tell stories won’t die, the delivery method will just be different.”

Wolfe shared what surprised him most about returning to school and what’s next for him.

Question: What inspired you to pursue a master’s degree from ASU?

Answer: I've been mentored by a lot of people in my career. You can't make it in Hollywood whatsoever without mentors and it really helped me get to where I've gotten to. Throughout my career I have also mentored people and I really want to keep doing it. So I thought the third act of my career could be teaching.

Q: What is something that has surprised you about your program?

A: I had never had an opportunity to focus on the vast amount of academic research that goes into the industry that I've spent my life in. It's not just reviews of movies or film analysis. There's a tremendous amount of academic study that breaks down the hows and the whys of audiences and filmmaking. We're all storytellers in my business. So I've always told stories as part of my job, but I've learned so much from ASU and from the program about what that means from a humanistic perspective. That's really been fascinating, the science of it.

Q: Have you encountered any challenges during your time in the master’s degree program? How did you overcome them?

A: The technology was something I had to get used to. When I was a freshman in college, Jimmy Carter was president of the United States and no one had heard the word internet. Things were completely different, everything was in person. So I had to start participating in classes through this new medium and find ways to make that work. Learning in an online situation has required a different kind of self discipline.

Q: What advice do you have for professionals like yourself who are interested in returning to higher education?

A: The biggest advice I have is to actually do it. It's wonderful to expand your knowledge. We all have to grow and change. It's phenomenal to have an opportunity to learn new things and then to apply that practical knowledge to your career. It’s also fascinating to get exposure to younger people from all over the world, that keeps it fresh and interesting. Another piece of advice would be to not fear the technology. The technology that ASU uses is extremely user-friendly. With minimum effort you can learn to navigate it well and you can actually gain things from it that you might not have with an in-person experience.

Q: What are your plans after you complete your program?

A: When I first started the program, I thought I would pursue lecturing opportunities at local colleges here where I live in Los Angeles. COVID and my online experiences have really changed that and have shown me that I can teach and work in different kinds of capacities online and in different environments. I have an opportunity to reach schools and institutions that maybe wouldn’t normally have been able to connect with someone with a lot of Hollywood experience. But with the online capabilities I can reach them. So my goal is to teach younger people who want to be storytellers and work in Hollywood as I have, and try to share with them whatever it is I can share with them. I want to be an asset to any place that I can.