Traditional robots are adept at specialized tasks in structured environments. For example, industrial robotic arms skillfully install windshields during vehicle assembly at an automobile factory. But these heavy, rigid devices don’t work well if there are sudden changes to the objects being manipulated or the environment in which the robots operate.

“By contrast, biological systems perform much better in dynamic contexts,” said Roozbeh Khodambashi, a doctoral student of systems engineering in the Ira A. Fulton Schools of Engineering at Arizona State University. “A human hand or an elephant trunk, for example, can conform to various surfaces and manipulate or move things in many different settings.” 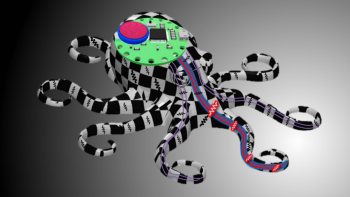 Novel research from ASU's IDEAlab supports the use of polymer materials known as hydrogels in soft robotics applications. The innovative work draws inspiration from the field of biology, and specifically the operation of animal motor neurons and muscle fibers. Details are published in a new issue of the journal Advanced Materials. Image courtesy of IDEAlab/ASU Download Full Image

Khodambashi says the remarkable flexibility of these natural structures motivates his work in the field of soft robotics with Daniel Aukes, an assistant professor of engineering at The Polytechnic School, one of the six Fulton Schools. Among the biology-inspired projects they pursue in Aukes’ IDEAlab is the development of octopus-inspired robot arms that can perform complex tasks while physically adapting in response to unstructured environments.

The results of this innovative research, supported by the Office of Naval Research and completed in collaboration with engineering peers at the University of California, Los Angeles, have just been published in the science journal Advanced Materials.

Aukes says the state of technology in soft robotics still employs a lot of inflexible components. Systems often use pneumatics to inflate and deflate actuators of shaped rubber or silicone, but these pliable forms operate through more conventional, rigid pneumatic elements behind the scenes.

“Many of the ideas sound great until you consider all the ‘baggage’ that comes with them,” Aukes said. “Pneumatic systems often require compressors, solenoids and pressurized tanks to drive the shape change or movement in response to stimuli. And even then, the degrees of freedom (of motion) of the system can be limited. It’s promising for certain applications, but this style of soft actuator is limited for use in mobile applications or on smaller robots.”

Alternative materials with potential to enable controlled movement via shape change include a group of polymers known as hydrogels. These substances, which the IDEAlab team has fabricated in the form of 4-millimeter cubes called voxels, can swell and shrink to a remarkable degree in reaction to light, heat or other stimulation.

But they don’t do so symmetrically. Current hydrogel formulations may respond to heat by expelling water and contracting in just seconds, but they can take hours to absorb water and expand to their original shape when the stimulation is removed.

Such divergent response rates lack utility for soft robotics, but the focus of hydrogel development has been toward other purposes. Most materials scientists have directed hydrogel innovation to theoretic laboratory work or biomedical and pharmaceutical applications. Additionally, the synthesis of these materials has required such sophisticated techniques and expensive ingredients that fabrication by roboticists for their own research has been all but impossible.

“But to help advance soft robotics, hydrogels need to be more easily produced by researchers other than materials scientists,” Khodambashi said. “So, we made that happen. We took a standard formulation from the literature and tweaked it to achieve the parameters we wanted.”

Khodambashi says their recipe applies a process of rapid photopolymerization to create a microstructure of interconnected open pores in the hydrogel. This configuration allows for very fast expansion and contraction responses, a behavior that can be likened to muscle fiber movement.

“We actually developed a range of recipes, each with slightly different properties or deformation behaviors. And all of them can be fabricated by others in the robotics field,” he said. “That’s a really important achievement of our work.” 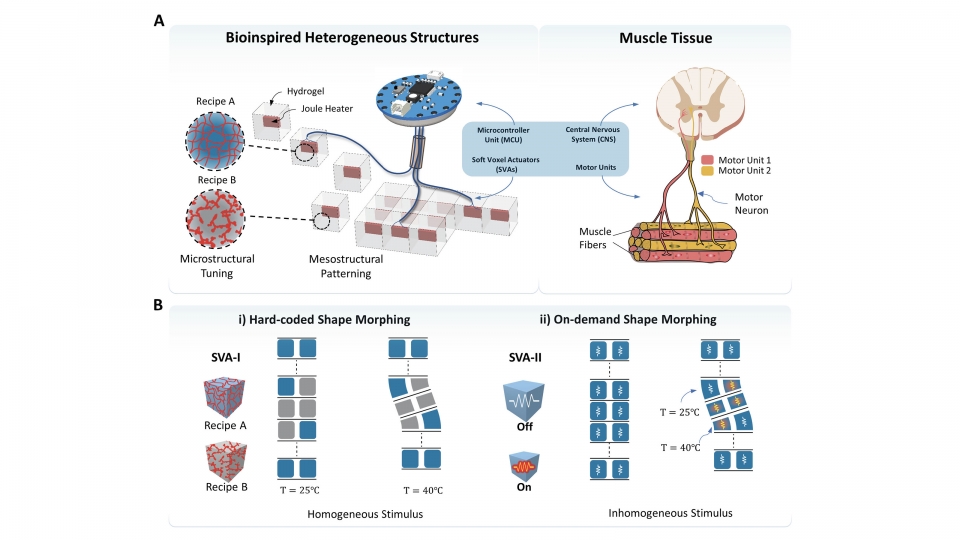 One experimental assembly, shown in section B as SVA-I, integrated voxels made from different hydrogel recipes. The pattern of their placement delivered a predetermined shape change as they deformed in response to ambient temperature stimulus. A second assembly, shown in section B as SVA-II, used voxels of a single hydrogel recipe. However, each voxel was embedded with a tiny heater that could deliver localized stimulus as directed by a microcontroller unit. This assembly permitted dynamic, on-demand shape changing. Image courtesy of IDEAlab/ASU

To demonstrate the impact of their innovation, the team constructed two types of hydrogel-based arm assemblies.

The first type of assembly integrated different recipes of their hydrogel material within its structure, meaning voxels made from one version would respond to stimulus — a 15-degree Celsius increase in ambient temperature — in a different way than those made from the other version. By arranging the two voxel types in a specific pattern, the stimulus application resulted in a predetermined shape change, such as a coiled motion that can move or grip an object.

The second type of assembly used only a single version of the hydrogel recipe and arranged the voxels in a 2x8 array to form an arm. But each cube was embedded with a tiny resistor or Joule heater, and they all were wired to a single microcontroller unit that could deliver electrical current to them individually. This arrangement mimics the connection of animal muscle tissue to a central nervous system.

“And by directing the microcontroller unit to deliver a cascading sequence of voltages to each of the Joule heaters, the voxel cubes contract and expand in a way that sends longitudinal and transverse waves down the structure as a whole,” Aukes said. “It generates an undulatory motion like you would see with an octopus tentacle.”

Aukes and Khodambashi say they are pleased that their tunable hydrogel synthesis method and their voxel assembly design represent important tools to advance soft robotics toward varied applications in unstructured environments.

“I can see how learning more about undersea life could guide the development of soft robots that work in colonies to achieve complex tasks such as seafloor mapping or environmental cleanup,” Aukes said.

“These voxel actuators can become very small,” he said. “Imagine a tiny catheter that we can control to navigate with precision through human veins, or the delicate work of gene therapy in which we need to inject something into individual cells. The potential is truly exciting.”

Freshman pin hitter Marta Levinska was named the Pac-12 Freshman of the Week after helping Sun Devil Volleyball take down the No. 8 Washington Huskies in the season opener over the weekend. ... Freshman pin hitter Marta Levinska was named the Pac-12 Freshman of the Week after helping Sun Devil Volleyball take down the No. 8 Washington Huskies in the season opener over the weekend.