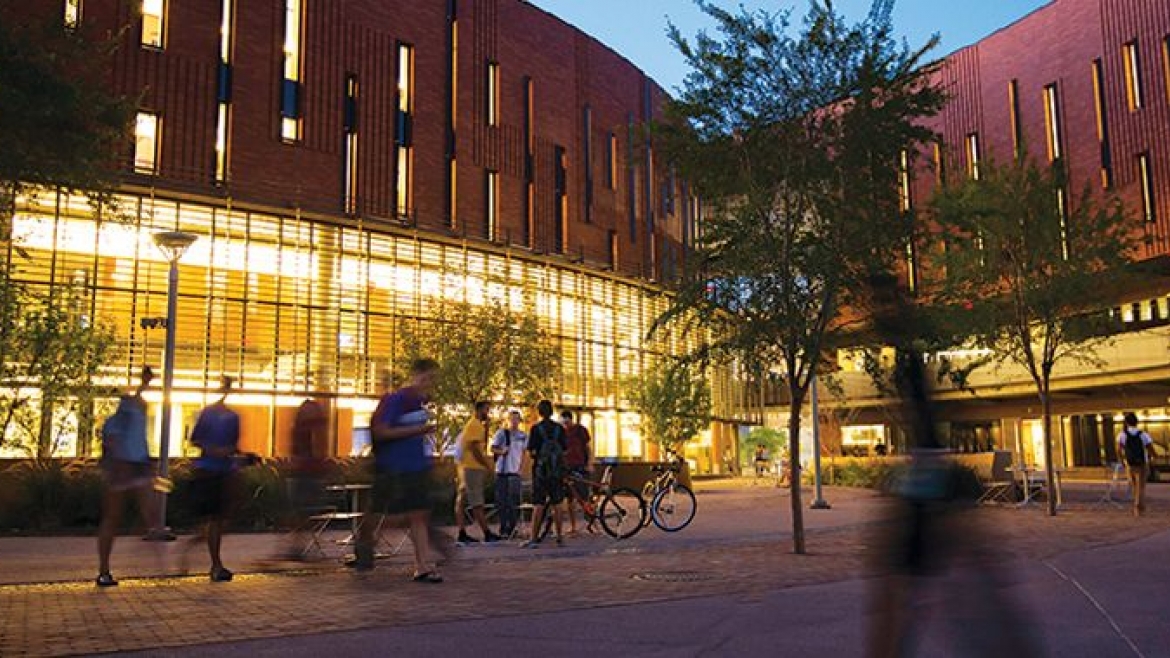 Students, staff and faculty of the W. P. Carey School of Business met Jan. 21 to discuss how the school’s motto of “Business is Personal” can reflect the urgent calls for better diversity, equity and inclusion.

Like many units of Arizona State University, and the university as a whole, W. P. Carey started discussions on racial reckoning last year, after the nationwide protests over the killing of George Floyd in May 2020. The Diversity, Equity and Inclusion Committee and the Inclusive Teaching and Learning Committee were formed.

Jeffrey Wilson, a professor of economics, is the faculty chair of the universitywide Advisory Council on African American Affairs.

“I have been at ASU for 35 years and somehow, this time, this past summer, was really different,” he said, noting that there are now many diversity committees across the university.

“I’m sad to tell you that in my 35 years, we picked up some things and there was smoke and no fire. This time, I expect the fire to come forward soon.”

The workshop was a chance to update the W. P. Carey community on the work done so far and to allow several people to highlight important issues to consider.

One key message from the workshop speakers was to accept difficult truths, both in history and in what’s happening now.

Lois Brown, director of the Center for the Study of Race and Democracy at ASU, has been working with W. P. Carey, and was the keynote speaker of the workshop.

She described the history of using violence to destroy the economic livelihoods of Black people. Her primary example was the 1921 massacre of the Greenwood District in Tulsa, when a thriving Black neighborhood of 35 city blocks with more than 100 businesses was firebombed by white residents. More than 300 people were killed and 1,000 homes were destroyed by a white mob fueled by jealousy, she said.

Brown said that Black economic enterprises such as the Greenwood District are understudied.

“There have been traditions and histories of African American enterprise and financial success that have been stunning,” said Brown, an ASU Foundation Professor of English.

Americans often forget that the full title of the 1963 event where Martin Luther King Jr. gave his “I Have a Dream” speech was the “March on Washington for Jobs and Freedom,” Brown said.

“Economic justice is intertwined with every conversation we have about democracy, diversity, equity and inclusion,” she said.

Brown said that inclusion must be a deliberate practice informed by history, culture and awareness.

Several speakers shared their thoughts on how W. P. Carey can improve inclusion.

Aniyah Braveboy, a senior majoring in public service and public policy in the W. P. Carey School of Business, said that the school must “prepare Black students for life as a Black person outside of college.”

That means having more Black mentors and faculty members, as well as incorporating more content about Black people and culture into the classroom, she said.

“I took African American Affairs, and other than that class, none of my other classes spoke of Black culture or Black history in other realms, such as accounting or psychology or business,” said Braveboy, who is president of the Black African Coalition student group.

“Other than talking about slavery or Martin Luther King Jr. Day or Black History Month, it’s never mentioned in coursework.”

The Black African Coalition has surveyed students and found that they want more Black academic advisers and peer advisers at ASU, she said. She suggested the school have more Black mentors in the freshman-level W. P. Carey 101 class.

“I know that ASU loves the idea of treating every person the same, but when a Black person applies for a job, they are not looked at the same as a Latin person or a white person,” said Braveboy, who recounted a recent job interview in which she faced discrimination.

“Minority students need more assistance and more attention in this area because of how America is,” she said.

Dan Gruber, associate dean for teaching and learning, said that the school will soon announce a new grant to encourage innovative and inclusive practices in curriculum. The speaker series will continue over the next few months, with an April session focused on syllabi and coursework.

The workshop participants were encouraged to reflect on what each speaker said, and a discussion session followed the talks.

Kim Jones started working in the business school when she was an undergraduate in the late 1970s.

Back then, she rarely saw anyone in the business school who looked like her.

“There were not many people of color,” said Jones, who is now an academic success adviser.

“Things have changed very gradually. I don’t want to say we’ve become complacent, but we need a flow, we need a movement.”

She said it’s important to clear a path to staff and faculty positions for people from underrepresented groups.

“It’s propping the door for others to walk through,” she said.

ASU on the cutting edge of robotics

Twenty-five faculty members at Arizona State University are researching the cutting edge of robotics. Seven of them have won the NSF CAREER award, the National Science Foundation's most prestigious award in support of early-career faculty.  It's safe to say, ASU is poised to make great strides in the field. “We have talent,” exoskeleton roboticist Tom Sugar said. Some of their resear... 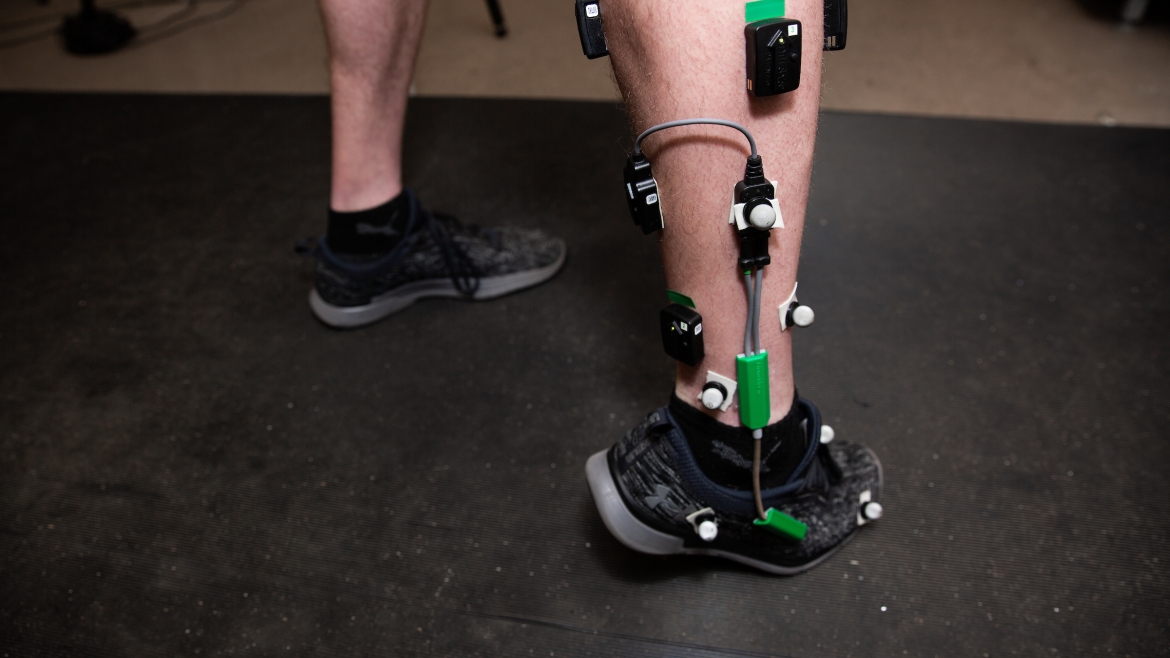 ASU on the cutting edge of robotics

Twenty-five faculty members at Arizona State University are researching the cutting edge of robotics. Seven of them have won the NSF CAREER award, the National Science Foundation's most prestigious award in support of early-career faculty.

It's safe to say, ASU is poised to make great strides in the field.

Some of their research has gone out into the world and become reality, like a prosthetic hand that can feel. Some of it, like a flying swarm of tiny robots, is a long way off.

Here are some highlights from inside ASU's robotics labs:

Daniel Aukes, an assistant professor at the Polytechnic campus, is leading the Kaiteki Project.

About 50 million people in the U.S. have disabilities that hamper their mobility. Shopping in stores, strolling around neighborhoods and crossing an airport unassisted are some of the things — which people with disabities have difficulty doing — that many of us take for granted.

Aukes and four other roboticists are working on wearable, foldable robotic exoskeletons to enhance quality of life. The devices would fit around knees, elbows, waists and other areas. The team’s approach for the devices is threefold: providing alternate ways to carry loads, reconfiguring itself for different activities and learning with the wearer to improve usability. The devices would use machine learning to learn about the wearer, and guide and train them, for a symbiotic experience.

In his Human Machine Integration Lab, Sugar has created exoskeletons to cool bodies in extreme heat, make runners faster, ease the load for backpackers and climb walls like Spiderman.

In addition to working on the Kaiteki Project with Aukes, Sugar is working on an exoskeleton for the U.S. Air Force for pushing and lifting. He also has a grant to build an elbow exoskeleton for people who can’t use their hands and elbows because of severe nerve injuries in the shoulder.

Spring Berman is an associate professor of aerospace and mechanical engineering in the School for Engineering of Matter, Transport and Energy and is graduate faculty for Computer Science and Exploration Systems Design. One of her research areas is creating swarms of tiny robots.

They could be used for search and rescue, mapping and a host of other applications. Aspects she and her team have investigated include collective transport, collision-free navigation, swarm herding, and mapping and estimation. 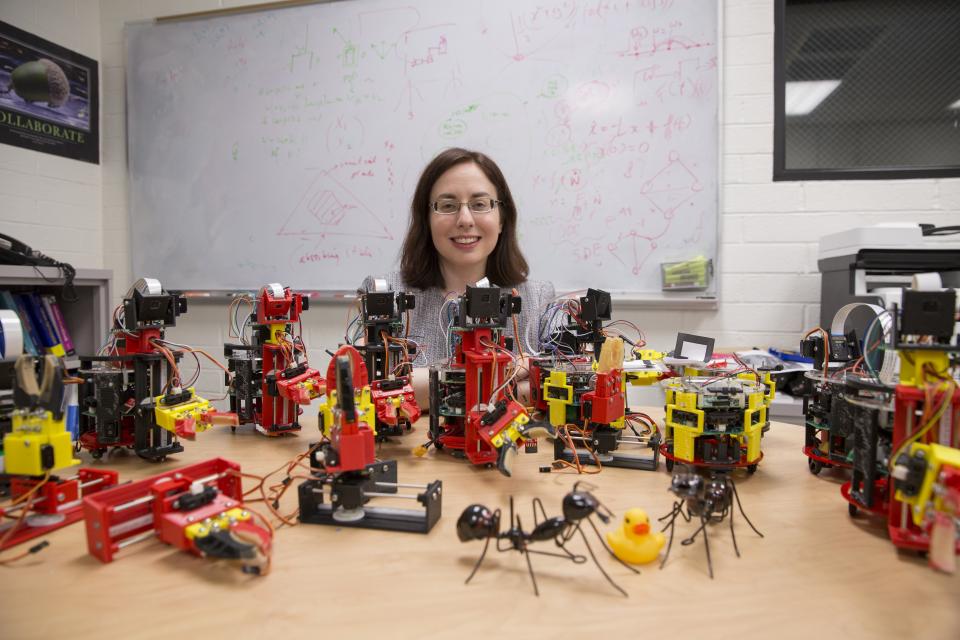 Spring Berman is an assistant professor of mechanical and aerospace engineering in ASU’s Ira A. Fulton Schools of Engineering who focuses on research in the modeling, analysis, control and optimization of multi-robot systems.

James Abbas doesn’t consider himself a roboticist. An associate professor in the School of Biological and Health Systems Engineering, he is director of the Center for Adaptive Neural Systems. He sees his work as using robot-like technology to interface with the human nervous system.

For example, in spring 2011, a 41-year-old Florida real estate investor named Jason Little was in a rollover accident on the interstate. His left arm was trapped outside the vehicle, hopelessly mangled. Seven years later, he was matched with a prosthesis created by Abbas and Professor Ranu Jung, chair of the Department of Biomedical Engineering at Florida International University. When he touched his wife using the prosthesis, it was the first time since the accident he had felt her with his left hand.

The prosthesis is called the Neural-Enabled Prosthetic Hand system. Wires implanted in the upper arm connect to a neurostimulator implanted in Little’s shoulder that has a radio frequency coil and a magnet. When Little dons the arm, he positions an external coil over the implant and it is held in place with a magnet.

“It basically is sensing two things,” Abbas said. “One is the force on the thumb, and the other is how much it’s open.”

Abbas has funding to recruit more amputees to the center and to run a second site at Walter Reed, the national military medical center in Washington, D.C.

“They're going to be recruiting military members with amputation and they'll be getting the system,” Abbas said. “So we're excited about that. We are going to be working with some people that have lost both hands and then providing sensation on one of their prostheses. For someone in that situation who really doesn't have any sensation at all with either of their hands, the importance of getting that back is going to be much more meaningful and much more useful for them because their baseline is so low in terms of what they can do.”

Stroke is one of the leading causes of long-term disabilities in the United States, affecting about 6.5 million Americans. With a decrease in stroke mortality and an increasingly aging population, the number of people requiring rehabilitation following stroke is projected to increase, creating a significant societal need to improve the effectiveness of stroke rehabilitation services.

Hyunglae Lee, an assistant professor of aerospace and mechanical engineering, is developing an innovative framework, called Transparent Robotic-Aided Rehabilitation, or TRAIN for short, and utilizing it in exercise therapy to significantly improve the effectiveness of robot-aided rehabilitation.

Robot-aided rehabilitation has been increasingly utilized to support clinicians in providing high-intensity and repetitive exercise therapy for stroke survivors, and many studies have demonstrated its effectiveness over conventional therapy.

Dancing, vacuuming, learning: What's next for robots and their creators?

Why seeing robots in pop culture is important

Top photo: A demonstration of the electromyography motion capture system in the Hyunglae Lee robotics lab on the Tempe campus in 2018. Photo by Deanna Dent/ASU Now

Erik Wirtanen contributed to this article